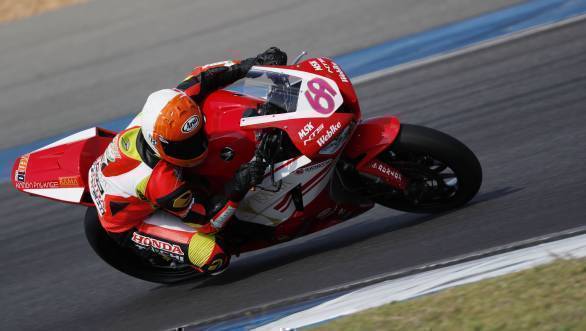 The high point of the second round of the 2017 Asia Road Racing Championship, held at the Chang International Circuit at Buriram, Thailand, for the RAMA Honda by NTS T.Pro Ten10 oufit was that Sarath Kumar scored points.

The Indian rider finished Race 1 of the Super Sports 600 class in 13th place, which gave him three championship points. However, things weren't good for Sarath in the second race of the weekend, as he only finished 17th on the grid, scoring no points.

It was a tough weekend also for Rajiv Sethu, who is the team's rider in the Asia Production 250 class. Sethu crashed during the practice session, and his bike was damaged so badly that he had to sit the weekend out.

Team manager Ramji Govindarajan said of the weekend "Overall, it was not a great weekend for the whole team. Out top rider Taiga Hada (Japan) had a crash in Race 1 and finished seventh in the next to score some points. Our only other rider in the AP250 class, Tomoyoshi Koyama managed to finish sixth and seventh in the two races with the bike still under development. He fought hard with the second batch of riders who still had faster bikes."

The next time the RAMA Honda outfit will take to the track, will be at the third round of the ARRC that will be held on June 3 and 4 at Suzuka in Japan.