The 2016 Skoda Kodiaq SUV was spied testing for the first time. The upcoming Kodiaq SUV is set to launch at the Paris Motor Show in October this year and based on the VisionS concept which was unveiled at the 2016 Geneva Motor Show in March. 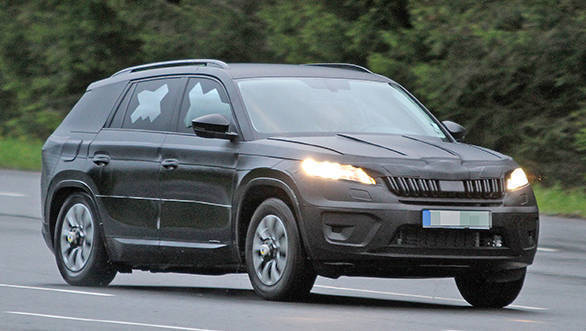 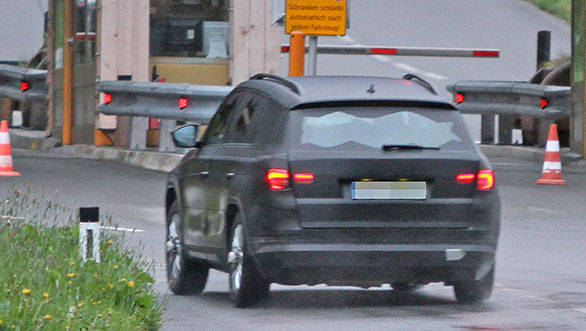 The exterior design will be heavily based on the VisionS concept, although the production model would be relatively toned down. The front grille and lighting arrangement are said to remain unchanged. The automaker's first three-row crossover will be based on parent company Volkswagen's MQB (Modularer Querbaukasten in German or Modular Transverse Matrix) platform. The size of the upcoming seven-seater Kodiaq could be estimated, based on the VisionS' dimensions, 4.70m in length, 1.91m in width and 1.68m in height, while having a wheelbase of 2.97m.

The core of the Kodiaq's engine range will be taken from the Superb sedan. The upcoming crossover would be coming with TSI petrol and TDI diesel engines with displacements up to 2.0 litres. Front wheel and all-wheel drive would be available along with either a 6-speed manual or a 7-speed dual-clutch automatic gearbox. A plug-in hybrid variant is also planned but won't be available with the launch range as the company plans to launch its first hybrid variant with its Superb sedan. 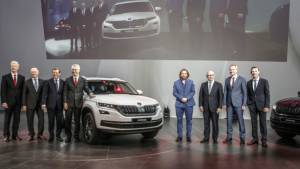