Round 1 of the MRF Challenge 2016 concluded on Saturday at the Bahrain International Circuit. It was the Day Two of  Round 1 and there were pretty intense battles between the racers as all of them were hoping to grab as many points as possible from the season opener. 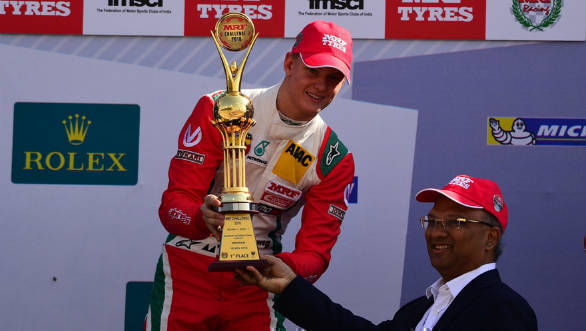 German driver, Mick Schumacher, son of racing legend Michael Schumacher, put up a stunning performance to win two out of the three Races of the day. The youngster had finished Race One, held on Friday, on P5, despite giving it all. However, he did not let that discourage him from trying harder for Sunday's Races. He won Race Two and Race Four and now leads the Championship with 75 points in the bag. Ralf Aron won Race Three.

As Race Two began, Mick Schumacher made an incredible start from P2, and managed to get past Pole sitter Felipe Drugovich going into Turn One. Schumacher, now in the lead, began pulling away while Drugovich was coming under pressure from Harrison Newey and Joey Mawson.The duo got past Drugovich and began chasing Schumacher. 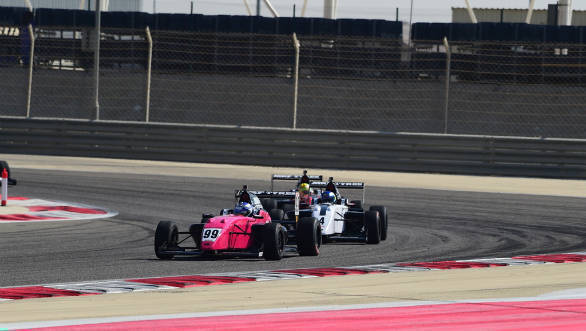 Ralf Aron made a poor start from the lights but he slowly began closing in on the leading pack. Mawson, meanwhile was engaged in an epic duel with Newey. The Australian driver was all over the back of Newey's car and finally managed to get past with a few laps to spare. Newey, now relegated to P3, was beginning to fall into the clutches of the hard charging Ralf Aron.

On the Final Lap, Aron made a spectacular move on Newey and held on to the third position as they crossed the finish line. The difference between Aron and Newey was a mere 0.016s. At the head of the field, Schumacher cruised to a comfortable victory, followed by Joey Mawson. Schumacher collected 25 points at the end of the Race.

In Race Three, Harrison Newey started on Pole position, however a poor start resulted in him losing a few places going into Turn 1. Joey Mawson made the most of Newey's mistake to get into the lead with Ralf Aron and Mick Schumacher in P2 and P3 respectively. As the Lap progressed, Schumacher waited to make a move on Aron. He managed to get past at Turn 9, however, Aron overtook him down the main straight to grab P2.

Harrison Newey, meanwhile, was trying to recover from his disastrous start, however he was forced to retire towards the end of Lap 1. The Safety Car was out as the marshals cleared Newey's car off the track. At the restart, Aron made a brilliant move on Mawson and moved into the lead. From then on he was in a class of his own as he managed to build a considerable gap to Mawson in P2. At the finish line the duo were separated by 6.566s. Mick Schumacher finished Third, after a close fight with the hard charging Felipe Drugovich, who crossed the chequered flag 0.248s behind him.

Race Four was not an easy victory for Schumacher. As the lights went out, he got past Pole-man Pedro Cardoso into C1, while Juri Vips took over the lead. Schumacher had to fight hard to close the gap to Vips, and he only managed to get past him at Turn 9. The lead trio of Schumacher, Vips and Cardoso managed to hold their respective, P1, P2 and P3 positions to the end of the Race.

Ralf Aron and Joey Mawson were fighting it out for P4, but the man on charge was Harrison Newey. He put in a brilliant set of opening laps and made up eight positions to rise to P6. He got past Aron on Lap 4 to move into P5, and then began piling the pressure on Mawson. Towards the closing laps, Mawson succumbed and Newey moved into P4.

Mick Schumacher was elated about his double win and the positive start to the Championship. He leads Ralf Aron by 3 points and Joey Mawson by 14 points. The next Round of the MRF Challenge 2016 will be held in Dubai.