The first proper stage of rallying during the 2016 Oilibya Rally Morocco was held on the second day of the event. Both Hero MotoSport Team Rally riders - Joaquim Rodrigues and CS Santosh got off to a rather tricky start. The good thing, though, is that both riders were able to finish the rally, although official results haven't been announced yet due to an issue with the timing keeping system.

The first real test of the rally, involved 120km of hard riding along the coast. J-Rod began the day within the top 15, after his result in the prologue stage. But it was't such an easy stage for the Portuguese rider, who crashed in the stage early on, breaking his roadbook. "I was losing a lot of time. Then I lost my way twice. The second part I couldn´t go as quick as I wanted because of that roadbook problem. There was a lot of dust and the guys behind started catching me. Not much I could do, really. I tried not to crash again and bring the bike home. Tomorrow is a long stage, hopefully we will do better than today." 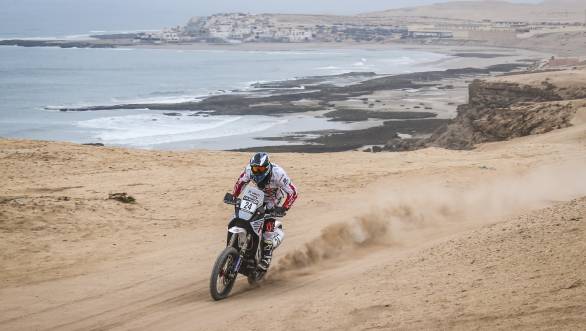 Things were a little better for Santosh, who managed to stay out of trouble. "The whole stage was really fast. The first part was kind of difficult in the sand. I took my time getting used to it and made no navigational errors. I did my own thing and overall it was a good day. I got into the feeling of the rally. Tomorrow we have the first part of the marathon stage, looking forward to that."