Karthick Maruthi and his co-driver S Shankar Anand won the first round of the 2016 Maruti Suzuki National Super League Rally Championship. The 2016 Maruti Suzuki Uttarakhand Adventure Car Rally ended in Dehradun on March 18 after covering 900km over three days. All 54 participants who competed in the rally had finished it successfully. In second place were Jagmeet Gilla and his co-driver Chandan Sen, while in third place were Sachin Singh and co-driver M Prakash. Karthick Maruthi and S Shankar were awarded Rs 5 lakh as prize money while the second and third place winners received Rs 3 lakh and Rs 2 lakh respectively. 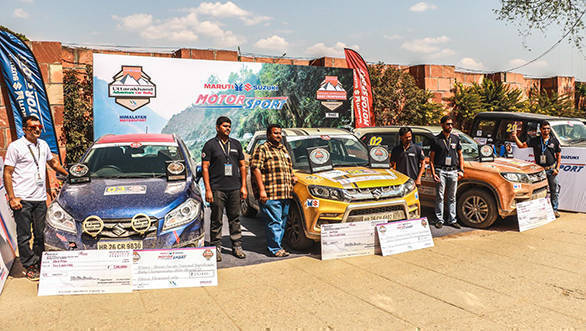 "We are extremely pleased with the overwhelming enthusiasm shown by the participants and thankful to the Uttarakhand Government for their immense support in organising this rally. This is an encouraging start to Maruti Suzuki's motorsport calendar and the participant finishing all six rallies will be a true champion," said Vinay Pant, general manager of marketing at Maruti Suzuki. He also congratulated the winners and invited all participants to take part in the second leg of the rally, the details of which will be announced soon. The overall champion of the 2016 Maruti Suzuki National Super League Rally Championship will win a Maruti Suzuki Vitara Brezza said Pant.