The first day of the final round of the JK Tyre FMSCI National Rotax Karting Championship took place at the Mohite's Racing Academy in Kolhapur. The 1.16km clockwise track will play host to the three class of the championship over the weekend: the Micro Max, Junior Max and Senior Max classes.

The qualifying rounds took place over the first half of the day, with the Micro Max class going first. The newly crowned Asian Micro Max karting champion Shahan Ali Mohsin of Meco Racing claimed pole comfortably with a time of 51.603 seconds, beating his nearest competitor, Arjun R of Birel ART by 0.478 seconds.

In the Junior Max class, Chirag Ghorpade,  racing for Bangalore-based BPC Racing took pole, narrowly beating team-mate Manav Sharma by just 0.101 of a second. While in the Senior Max class, Ricky Donison of BPC Racing stole the show, setting a time of 51.277 seconds, putting him well ahead of Nayan Chatterjee of Meco Racing by a comfortable margin of 0.670 seconds. Championship leader Vishnu Prasad qualified fourth, with at time of 52.420 seconds, 1.143 seconds off the pace of Donison.

After lunch, the heats began. With two heats for each class, we were in for a good afternoon of racing. In the first heat of the Micro Max class, Shahan Ali Mohsin and Aadiytansh K of Rayo Racing had a good tussle for the lead, with Shahan eventually coming out on top, building on his qualifying success. Aadiytansh had to settle for second while Arjun Nair of Meco claimed third. 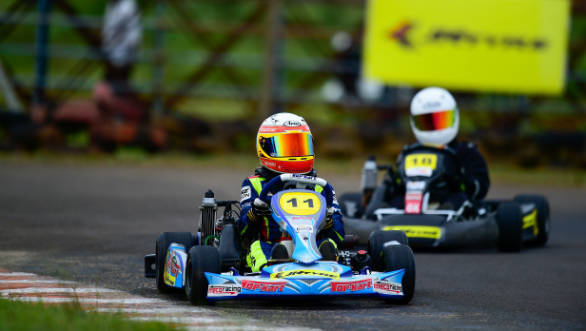 In the Junior Max class, Heat 1 started off with Nirmal Umashankar of Meco Racing in the lead, he was followed by eventual winner Chirag Ghorpade and Mira Erda. Chirag, of BPC Racing displayed great skill, taking the win, beating Manav Sharma by just 0.419 of a second, with Umashankar having to settle for third place.

As the drivers of the Senior Max class began prepping for their first heat, rain started to fall. Being a drizzle the race was started with slicks. Ricky Donison started on pole and dominated the race, with a 9.316 second lead over second place local boy Dhruv Mohite. The interesting fight was further down the field, between Nayan Chatterjee and Vishnu Prasad. Nayan, who started in second position dropped back down the order on the first lap. The two drivers began fighting for track position, with Vishnu ultimately coming out on top to take third.

Just as the second set of heats were about to begin, the rain increased and the Micro Max heat was declared a wet race. Armed with wet weather tyres, the drivers went on to the starting grid, desperately trying to get some heat into the tyres. Shahan Ali was the victor again, displaying incredible skill when controlling the two-stroke Rotax kart in the wet. He had built a comfortable 5.475 second lead over second place Arjun Nair who in turn had an 8.583 second advantage over third place drive, Aadityansh. 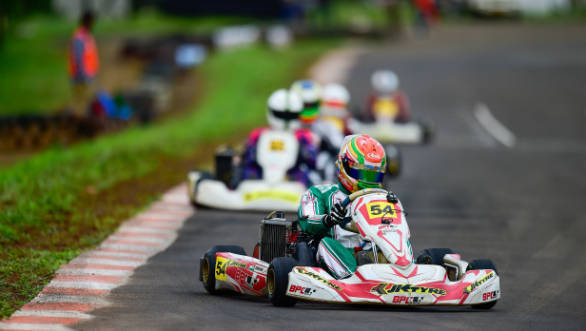 Ricky Donison won both heats with a gap of nine seconds

The second heat of the Junior Max class was a real nail biter of an event. With just three eventual finishers, the race went down to the wire, with Mira Erda of Erda Racing taking the win, just 0.066 seconds ahead of Aditya Swaminathan of Meco Racing. Originally a three-way battle for first, Nirmal Umashankar pulled into the pits on lap 12. Bhargav Pradyumna of Meco Racing, who was 15.338 seconds behind the two, came home third.

With a dry line now on track, the final heat of the day took place on slicks. The Senior Max class was again dominated by defending champion Ricky Donison, with a 9.319 second lead over the rest of the field. Nayan Chatterjee came home in second with Dhruv Mohite taking third, followed by championship leader Vishnu Prasad.

In the Micro Max class, Shahan will look to continue his current form into tomorrow's race and being the championship leader, with 320 points, it will be his title to lose. In the Junior Max class Manav Sharma currently leads the championship with a total tally of 334 points. Just six points ahead of Yash Aradhya of Meco Racing. With Donison in his current form, it is hard to see how he will be beaten, just four points adrift from Vishnu Prasad (Vishnu is on 348) in the championship it will make for a very interesting race on Sunday.