In the third round of the Indian National Rally Championship, the Rally de North, Arjun Rao Aroor and Satish Rajgopal took the win with a total time of 47min 10sec in their R2-spec Volkswagen Polo. In second place were Karna Kadur and Nikhil Pai, driving a Team Yokohama Polo, with 48min 4sec, while Team Mahindra Adventure's Gaurav Gill and Musa Sherif finished 20sec behind them to take third. However, Gill's team-matesAmittrajit Ghosh and Ashwin Naik, who suffered mechanical issues this round, are still leading the championship after a fifth place finish. 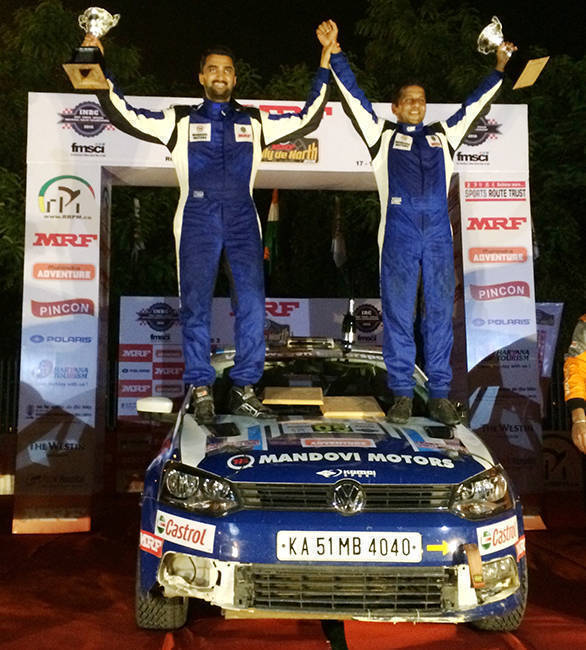 Winners of the INRC class in Round 3, Arjun Rao Aroor and Satish Rajgopal

This is the first time in 11 years that the INRC is being held in the North. The gravel event was supposed to hold six competitive stages covering close to 65km near Gurgaon. However, two stages were cancelled, cutting short the total distance to around 55km. There were a total of 38 teams competing in the rally, of which only 18 managed to cross the finish line. One of the retirees was Abhilash PG, who had won the first two rounds in the IRC class. Winning in that class in this round were Dhirendra Kumar and Honey Narulla with a time of 1hr 4sec.

Two rounds remain in 2016 INRC calendar, with the next one scheduled to be held in Bangalore from November 26-27. The final round of the championship will be held at Chikmagalur alongside the 2016 APRC from December 3-5.