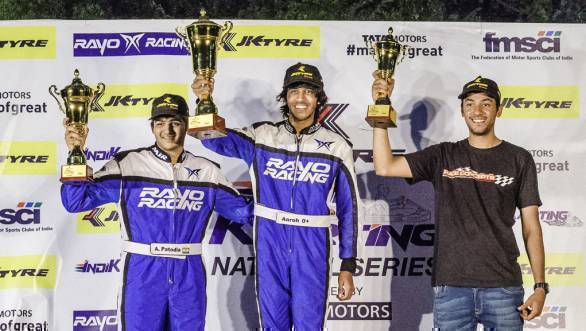 The podium for Race 3 of the Pro Senior class: Aaroh Ravindra flanked by second-placed Aanjan Patodia and third-placed Varun Anekar

The penultimate round of the 2016 JK Tyre IndiKarting National Series was held in Ludhiana's F2 Raceway in South City. It was the first time in 15 years that competitive karting made a return to Ludhiana, as a part of the new initiative by JK Tyre, Rayo Racing and Tata Motors.

While the first three rounds of the series didn't really go the way Mumbai's Aaroh Ravindra had planned, he managed to make a strong recovery at the fourth round in Ludhiana. Ravindra took pole and won the first race in the Pro Senior Class. Varun Anekar took second place, while Aanjan Patodia, from Pune, took third place. Jonathan Kuriakose won the Pro Junior Category. 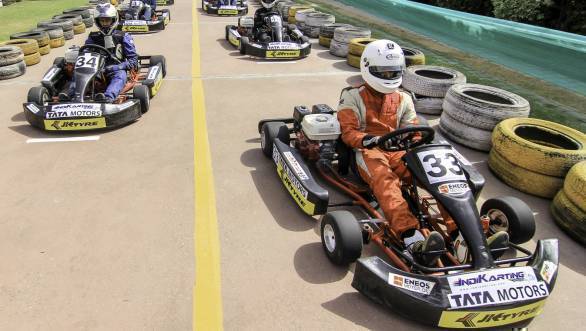 The grid for the Pro Senior class ahead of Race 2

The Pro Cadet class had some close competition in all three races, with a lot of overtaking up and down the grid. Aadityansh Kaulshi won Race 1, ahead of Hoshmand Elavia, with Aryan Vashishta finishing third. Aadityansh once again emerged on top in Race 2. Saatvik Kogileti and Hoshmand Elavia completed the podium. Kogileti won the third race, ahead of Ranvir Singh, with Aryan Vashishta finishing third. The Senior Plus category also saw excellent racing with Sanam finishing ahead of Clibe Joshva and Angad Matharoo. Armaan Bhalla won the women's category ahead of Shubhkiran Brar and Reena Prasad, while the corporate category was also won by Sanam Sekhon ahead of Angad Matharoo and Ishaan Garg. The finale of the National Series will be held in Delhi on June 11 and 12. The current championship leaders are Aanjan Patodia in the Pro Senior class with 216 points, Jonathan Kuriakose in the Pro Junior class with 227 points and Adityansh Kaulshi leading the Pro Cadet class with 222 points.