Datsun India has officially announced prices of its latest offering, the redi-Go starting at Rs 2.49 lakh, ex-Mumbai. There are five trims to choose from with the top S offering a driver airbag as standard.

The redi-Go is based on the CMF-A platform as the Renault Kwid. However on the styling front, both the cars have adopted a different language. The redi-Go has more of a tall boy "urban crossover" stance than the more SUV-derived look of the Kwid. The grille is a bold element of the redi-Go and it occupies nearly the entire face of the car. On top trims, Datsun offers LED DRLs above the fog lamp enclosure. The redi-Go also stays true to its concept form, in the sense that the design language hasn't been toned down. 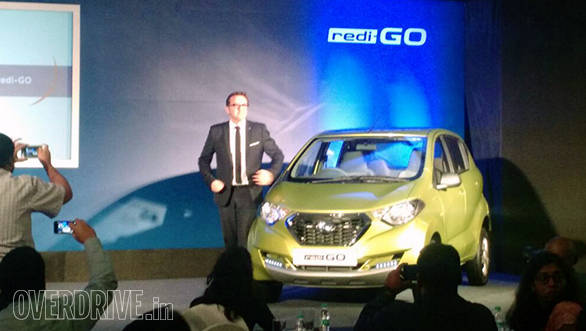 Inside, there is a single din audio system which supports aux and USB inputs. There are also few storage spaces around the cabin. Unlike the Go, the redi-Go is a conventional 5-seater and also the regular handbrake pattern. The tall boy design also accords enough headroom at the rear.

Powering the Datsun redi-Go is an 800cc petrol engine that makes 54PS/72Nm and is mated to a 5-speed manual. The claimed efficiency for the redi-Go is a high 25.17kmpl. Datsun says that the redi-Go will do the 0-100kmph run in less than 16 seconds. We will verify both the claims in our road-test soon.

Datsun redi-Go: Here are the important things that you need to know