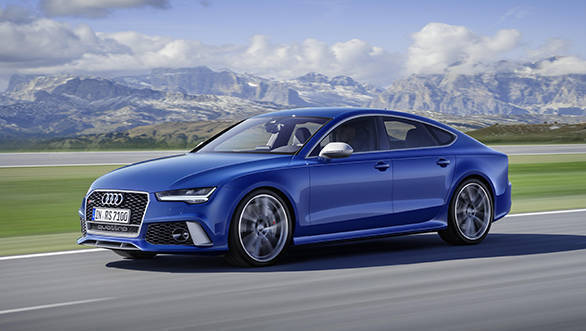 As a result, we managed a 0-100kmph time of just 3.7 seconds in our road test, which is 0.2 seconds quicker than the standard Audi RS 7. The Audi RS 7 Performance also gets an 8-speed DSG with the AWD Quattro system. Top speed is claimed to be 250kmph, but it can be increased to 280kmph with the optional dynamic package and 305kmph with the dynamic package plus. Audi is also claiming a fuel-efficiency figure of 10.53kmpl thanks to the cylinder deactivation system which runs the engine using four cylinders under low-load conditions.

Visually, there aren't any changes apart from a few brushed aluminium accents and a new design to the tail light elements. Apart from the existing colours in the Audi RS 7, the Performance variant will be available in an exclusive colour - ascari blue - which is seen in the image. Features such as four-zone automatic climate control, a head-up display, a Bose music system, air suspension and the RS sports exhaust system are standard like in the Audi RS 7.

Here's our video review of the Audi RS 7 Performance:

Audi e-tron GT to launch in India on...
Advertisement