2015 Superprestigio: Brad Baker takes the title for the second time

Brad Baker reclaims the Superprestigio title from Marquez after a close battle with him in the Superfinal race. Marquez set the fastest time during practice and continued his streak to take on pole position during qualifying for the Superprestigio class. Following closely were Toni Elias, Xavi Vierge and Julian Simon who were within 0.3 seconds of Marquez. In the open class, Oliver Brindley topped the time sheet with 12.44 seconds while Jared Mees and Brad Baker took fourth and fifth. 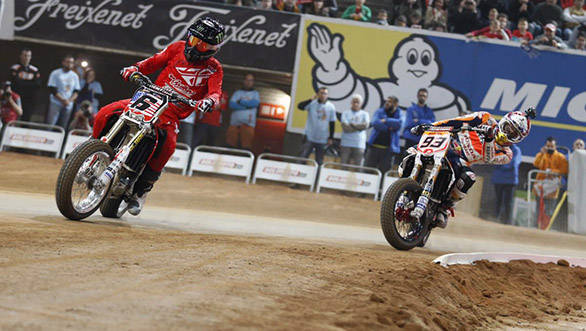 In the Open class, Baker and Mees took double wins in their heats to fight it out in the Open final. Masatoshi Ohmori from Japan stole first place in the first final. In the second one though, Baker and Mees finished first and second to secure a spot in the Superfinal race.

This Superfinal puts the best riders from each class together in a 16 lap race to battle it out for the Superprestigio title. This year, it was a close fight for first between Marc Marquez, Baker and Mees. But in the end, it was Baker who took the title for the second time, followed by Marquez and Mees.

Baker said, "It's been an amazing trip, feels like a second home with some great friends here. Rabat's mechanic was kind enough to come help me out, there's a great relationship with people here. It's been a crazy year, this time last year I had a broken shoulder and elbow, to hold a trophy with the same arm is great. Every time Marc got close the crowd would go wild, I didn't need to look back."