First round of the third Lamborghini Blancpain Super Trofeo Asia concluded on Sunday, June 21. Indian racer Armaan Ebrahim and his team-mate Dilantha Malagamuwa were placed first overall at the end of the round that took place in Fuji, Japan. 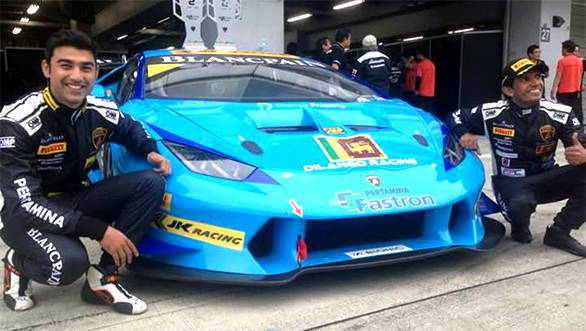 The Dilango Racing duo, which started at third place during Race 1 on Saturday, slid further down the grid to 12th, after a jammed wheel nut during the tyre change proved to be a spanner in the works. But Ebrahim and Malagamuwa were able to take their Lamborghini Huracan past seven cars and finish the race at fifth overall.

However, Race 2 proved to be the real gamechanger for the duo as they took first place despite the heavy downpour that had rendered the track wet.

Speaking of his win in Japan, JK Tyre ambassador Armaan Ebrahim said, "The team did a great job and got the car ready for Practice on Thursday and Friday which is all the testing that I could manage. Having never driven the Lamborghini Huracan before, I had to understand the dynamics of the car and still need to find some more track time to really get on top of the car. The car is really quick and stands out for itself. . . Dilantha, my team-mate from Sri Lanka and team owner did a great job in getting the team together and also drove well to hold on to the lead which I had built up."

The series will now head to other Asian tracks like Shanghai, Sepang, Sentul and Okayama. Between November 21-22, the Super Trofeo World Final, that brings together the grid from Europe, America and Asia will be held at Sebring as a seventh round of sorts.