2015 IOMTT: Victory Racing breaches the 160kmph barrier on its first ever run

Victory Racing had a picture perfect debut in the TT Zero Class, during their first ever practice session that too, at the 2015 Isle Of Man TT. On the very first run, the team's electric motorcycles breached the 160kmph (100mph) barrier. Team riders William Dunlop and Lee Johnston averaged a lap speed of  167.67kmph and 169.278 respectively. The motorcycles also clocked 225.308kmph as they went past the Sulby Speed Trap. 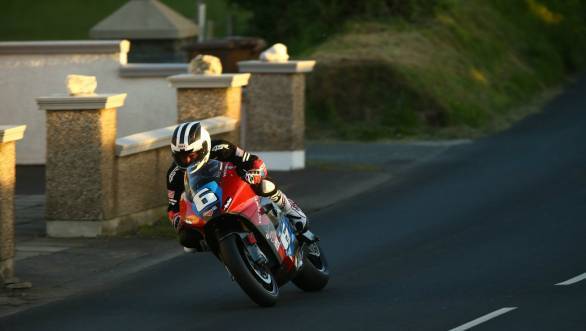 The Victory motorcycle is powered by twin Brammo batteries that are placed in between the twin-spar aluminium frame. A Parker GVM motor does duty on this motorcycle. The power output is 167PS at the rear wheel and weighs a 220kg.

Team manager Brian Wismann was elated with the team's promising performance on debut and said that he was optimistic about the reliability of the Victory motorcycles at the TT. The riders were happy with the motorcycles with the team's fastest rider, Johnston saying that the Victory Motorcycle was mint. William Dunlop, meanwhile, said that it was surprisingly good to ride and not as challenging as fighting with a 200PS motorcycle around the treacherous course.

Revealing the technical aspects of the electric bike, Victory Motorcycles said that the motorcycle's swingarm pivot point is placed ahead of the electric motor unlike conventionally fuelled motorcycles where the pivot point lies behind the engine. The chain is tighter too in order to handle the torque. Commonalities with petrol-powered motorcycles include forged magnesium wheels, Ohlins front forks and Brembo brakes.

The Victory Motorcycles also feature an energy recuperation system with the flexibility to alter the rate  of recuperation. The advantage of this lies in the fact that the motorcycle can be set up to suit individual riding styles. As Brian Wismann elaborates, Lee Johnston prefers a setup with a higher rate of energy recovery so as to slow down the bikes corner entry speed.