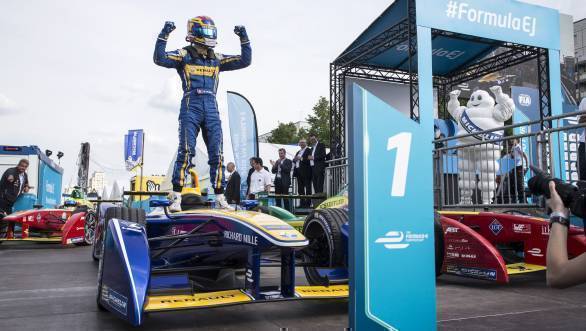 The Berlin ePrix was always going to have a huge bearing on the Formula E championship standings. This, because with Moscow dropping off the season calendar, Berlin became the penultimate round of the championship, ahead of the season finale in London.

Thanks to the fact that Sebastien Buemi won the Berlin ePrix, cutting down Lucas di Grassi's lead in the championship standings to just one single point, the remaining two races at the double-header at London's Battersea Park promise to be even more exciting.

But back to the race in Berlin. The man on pole for the ePrix was Virgin Racing's Jean Eric Vergne. However, from the first corner of the race, Buemi, who drives for the Renault e.Dams team, moved into the lead. Vergne did take his spot back in a decisive move on the second lap, although once his Swiss rival made a move on him to take first once again on Lap 6 of the race, there was simply nothing to do but let him run away at the head of the field.

The only worrying part of the race for Buemi was when the Safety Car came out on track after Dragon Racing's Loic Duval had ended up in the barriers. And with the pack closing up behind him, Buemi risked losing his top spot on the restart. However, when the Safety Car went back into the pits, Buemi kept his head down and sped away once again, with Daniel Abt of Abt Schaeffler Audi Sport finishing second, and di Grassi (who'd only qualified eighth) finishing third. There is, however, some amount of internal squabble within the Abt team, with Daniel Abt claiming he never heard the radio message that told him to move over and cede place to his championship-leading team-mate. 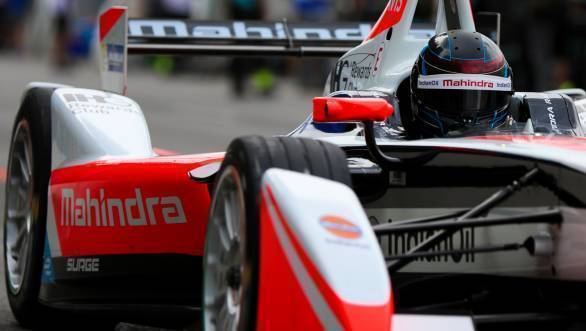 Six points at his home ePrix, for Mahindra Racing's Nick Heidfeld who finished the race seventh

It had been a tricky weekend for Mahindra Racing. Both their drivers qualified for Superpole, it was Bruno Senna who nabbed P4 and Nick Heidfeld who snagged P5. This meant that the team had a fighting chance for a podium. However, when the tyres pressures on both M2Electros were found to be too low, the two cars were relegated to P15 and P16.

When the race started, things weren't easy for Senna, who sustained damage to his front wing and and needed to pit early on for a new front end. This effectively ruined his race, with the Brazilian unable to finish higher than 15th, where he started. However, Senna also set the fastest lap of the race.

Heidfeld, on the other hand, began a steady climb up the order, pulling of overtaking moves on the drivers ahead of him. He ended the race seventh, a marked improvement over his P16 start.

In all, Mahindra Racing scored eight points - six for Heidfeld and two for Senna's fastest lap. This means the team improves their overall points haul to 73. With two races to go in London, they are hoping to hold onto fifth spot in the championship.