'Today is my turn to park the car', that is how I remember the Mercedes-Benz C-Class, the W203 that was the first Mercedes-Benz C-Class to be offered to Indian consumers way back in 2001. It was given to Adil as a long-termer, and he kept the keys close. Except at 12pm every day when it would have to be shifted from its parking spot on the left side of Karve Road to the right side. For that 100 metre exchange, Sirish and me, both cub reporters then, would fight for who'd park the car that day. That the car got driven far, far more than the 100-metre stretch only comes to light today. Adil does not yell at us as much today! Back then the C-Class was fascinating, it was dubbed the Baby Benz even back then, embodying the best of what Mercedes could pack in their smallest sedan. 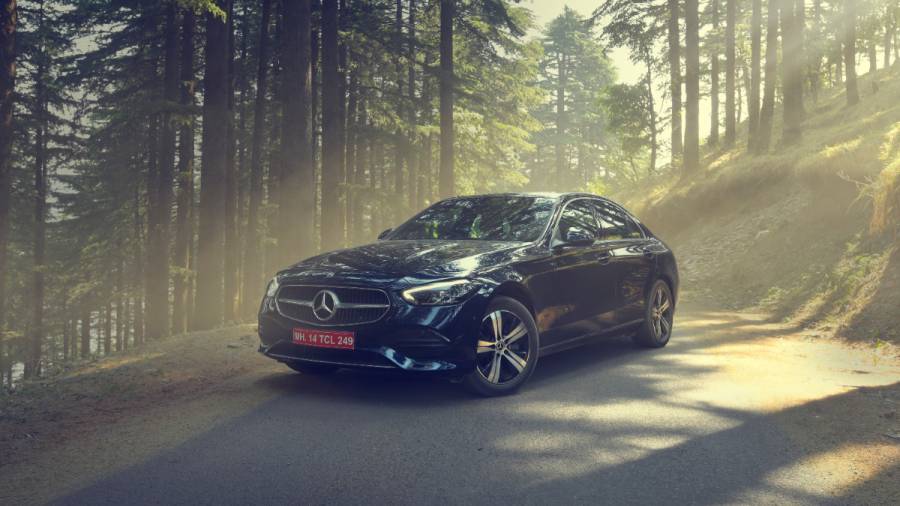 Turn the clock 22 years ahead and the new 2022 C-Class, the W206, kicks off on a new journey. The backdrop against which it is framed has changed, it is now preceded by the A-Class. So, the C-Class had to grow up, it had a younger sibling, and was no longer the fawned upon baby of the pack. But growing up and maturing are two different things. While the Mercedes-Benz C-Class has grown larger, it's longer, wider, has more room to boast of, has it matured to be a better driver's car? 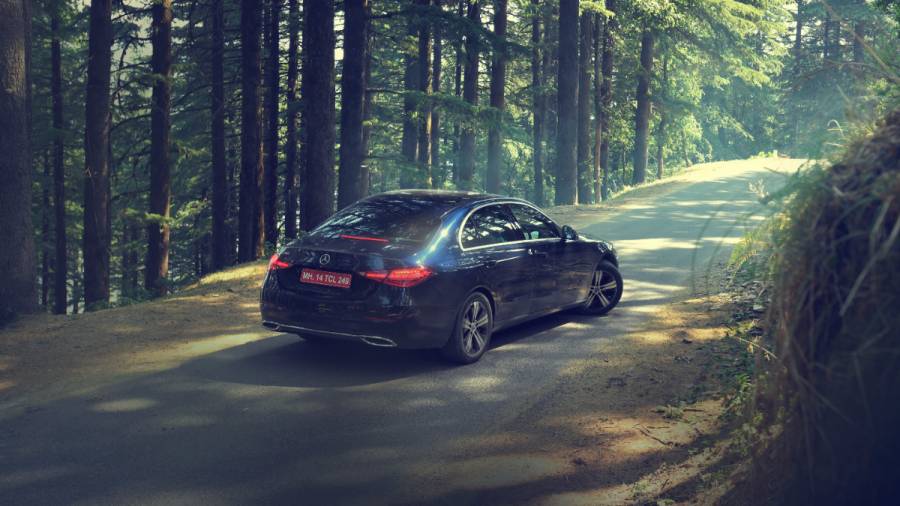 The C-Class is being made available in two basic trims, there is the Avantgarde line which is spread across the C 200 and the C 200d, and the AMG Line which is exclusive to the C 300d. No points for guessing which holds your attention. The C 300d has this typical AMG flourish with that contemporary inverted chin and a superbly detailed grille. A closer look reveals that the studded pincushion grille that caught global attention in the A-Class, is now replaced by a similar grille in the C-Class, except, the pincushions are tiny 3-pointed stars! What I do like more than that grille though is the side profile of the C-Class, it has this mildly GT-ish silhouette that is characteristic of all cars with a rear-wheel drivetrain. The longitudinal placement of the engine amplifies the length of the hood, but Mercedes have balanced the proportions, lending a form that is chic yet elegant and strong. 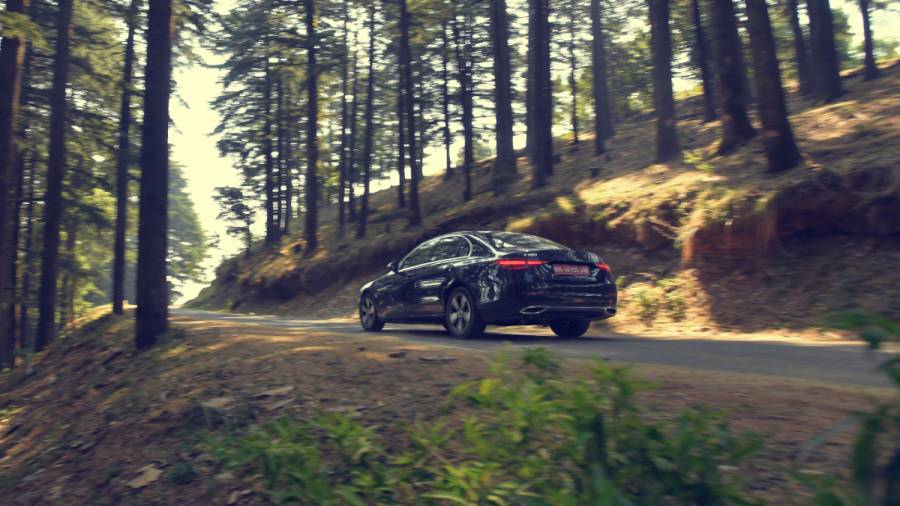 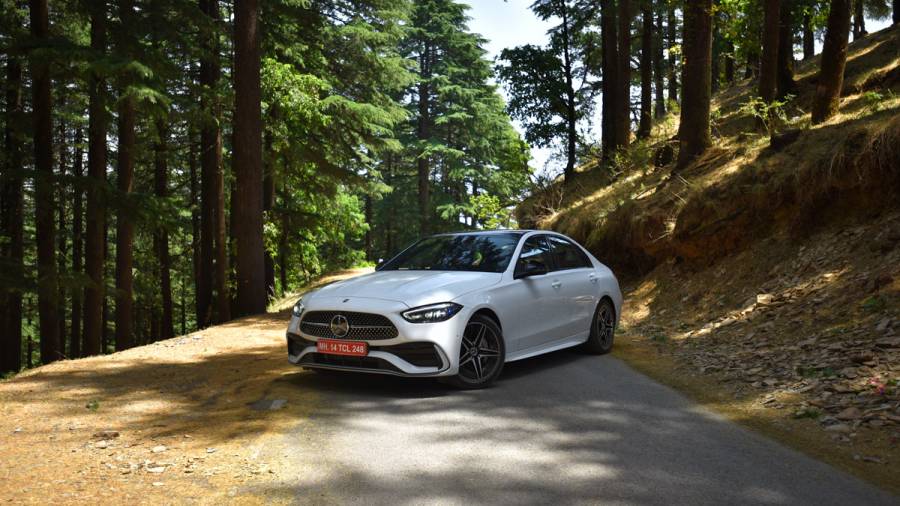 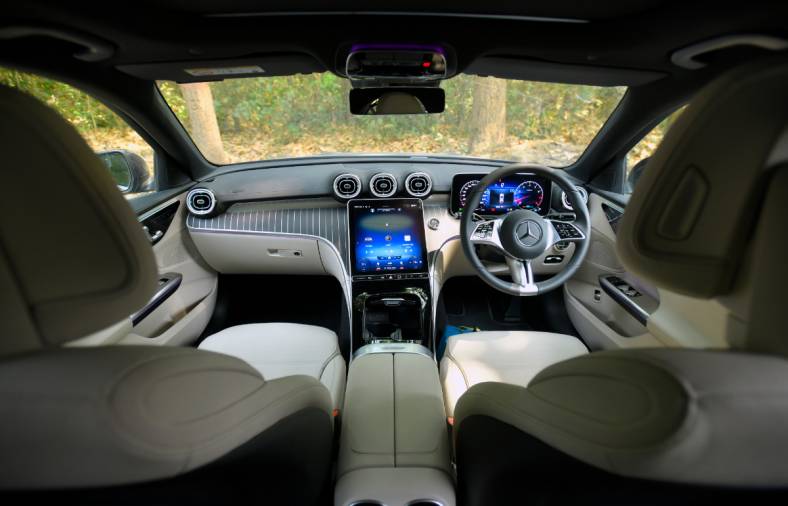 Inside the sedan, there are further visual differences between the trims, though the resemblance to the S-Class in either is uncanny. The dashboard in the C-Class cascades towards the floor elegantly, it has a similar air-con vent placement sitting atop the dash, except this has three circular vents as opposed to the four in the S-Class. There are also just two large visually arresting screens that come into focus. The first is the multi-media and infotainment tablet that also looks like it curves into the centre armrest. It's a fantastic design element, full marks to the concept and execution that makes this look like a single unit. The Avantgarde line gets a yacht top deck like vertical pinstriped effect which is interesting, but I liked the faux carbon fibre weave finish exclusive to the C 300d better. The steering wheel also on either variant is different, with the AMG Line three spoked wheel feeling much nicer and looking cooler, though the Avantgarde steering which is closer to that on the S-Class is also pretty unique.

The C-Class is larger as I mentioned. It's gotten 65mm longer, 10mm wider and 7mm taller, the wheelbase has also gone up by 25mm. Does not seem like much, does it? Well, it isn't. The W205 preceding this car was anyways a large sedan, with a roomy cabin. The W206 takes that forward, though the marginal increase in wheelbase brings with it minimal changes to the interior space. You had generous knee room and headroom anyway, as is shoulder space wide and generous. The seats are supportive with firm lumbar inserts to cushion and brace the areas that need bracing! However I don't like the upright seating position, it works well over short distances, but on longer journeys, you'd want the excesses of the E-Class to spread yourself out. 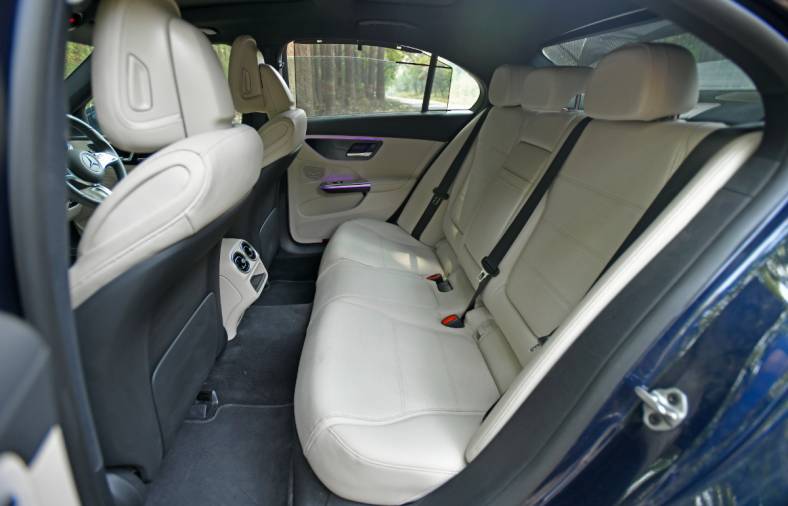 The C-Class, thanks to its rear-wheel drivetrain, has a fairly large transmission tunnel protruding through the centre of the car, taking away precious middle seat space for the backseat passengers. This restricts the seating to just four, with a fifth managing to hold fort for short urban drives. 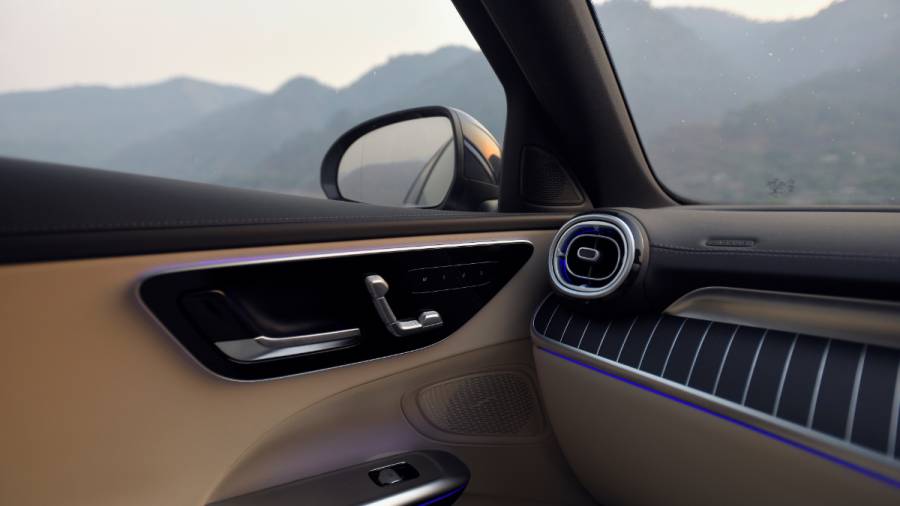 Driving in the Himalayan foothills is fantastic, windy roads with fantastic landscapes. It however has its downsides. Narrow roads and distractions can be dangerous, that is why the slim A-pillars with the fabulous window acreage and tremendous sightlines make this a much more pleasing car to drive. It's also why the cabin feels roomier and spacious. Open up the dual sunroof shades and you have a greenhouse that's hard to beat.

Mercedes-Benz will bring in three engine options in the new C-Class. There is the C 200, a 1.5-litre, 4-cylinder petrol with 204 horsepower and 300Nm. Available in just the Avantgarde trim this is the entry-level C-Class using the M 254 engine. Mercedes claims this engine is capable of hitting the ton in 7.3 seconds with a top speed rated at 246kmph. Of the three engine configurations, we got our hands on just two, the C 200 and the C 300d. The former is a bit slow to belt around on the fantastic Garhwal roads. Peak power comes in at a high 5800rpm and you need to rev this engine hard to get a spirited performance from it. For urban use though it's perfectly happy to tootle around at low speeds, without a care in the world. Taking things a notch higher is the C 200d, the 4-cylinder OM 654 M diesel. Rated output from this 2.0-litre diesel is 200 horses with 440Nm of peak torque, with similar performance specs as the petrol C 200. 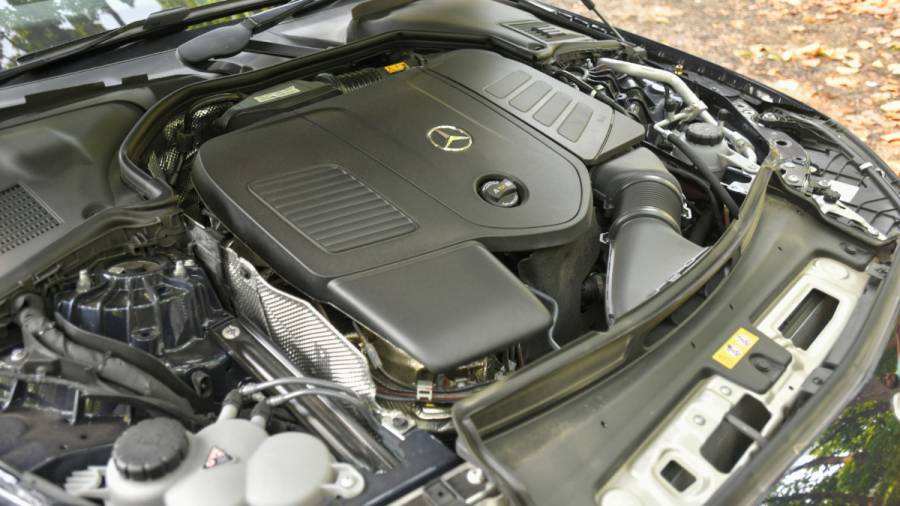 At the top of the range sits the C 300d with 265 horsepower and 550Nm of torque delivered from the same OM 654 M diesel motor. This engine is exclusive to the AMG line, and for a diesel its pretty impressive on performance. 0 to 100kph comes in a blistering 5.7 seconds though top speed is limited to 250kph. It's incredibly hard to identify this engine as a diesel. It's not just the refinement and luxury that breathes out through its four pots, it's the effortless acceleration that also makes the C 300d a fun to drive car everywhere, any day. There is however a secret to this. All three engines subscribe to Mercedes's new Integrated Starter Alternator (ISG) which quite simply is a little more than a mild hybrid system. It improves fuel economy, and at the same time supplements all three engines with additional power and torque thanks to that EQ Boost philosophy. In all three engines, it generates an additional 20PS and 200 Nm of torque when the need arises. The system used in the C-Class is in its second generation. Key components of the ISG have been integrated into the 9-speed automatic transmission, which reduces weight and thus makes it more efficient. The system uses a 48-volt electrical system which is faster yet more refined compared to the older 12V system. 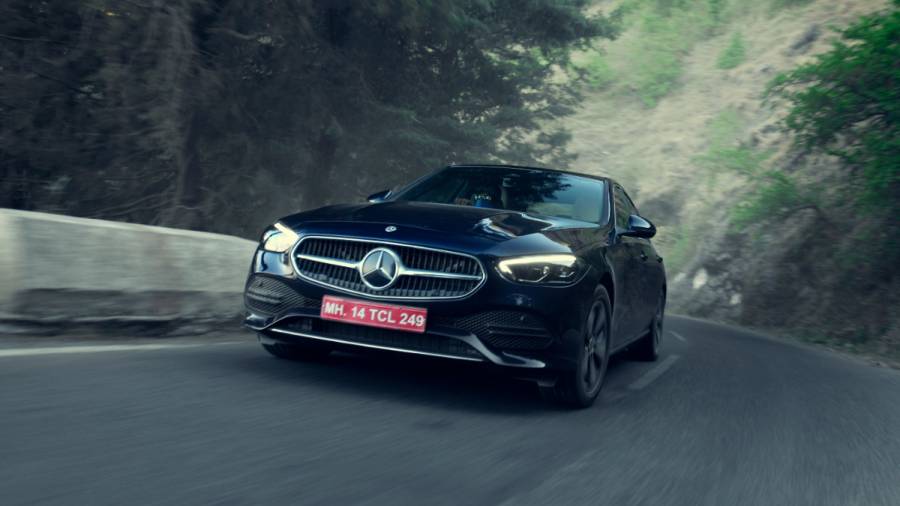 The underpinnings of the new C-Class haven't undergone a major change and yet you get fantastic ride comfort which is what the C-Class intends to deliver. I would however have liked to see adaptive damping on the C-Class, it would have placed it in a different league. The suspension while well sorted out for most conditions, needs a little more body control. The roads around Mussoorie need more stiffly sprung underpinnings to handle the many undulating twists and turns without creating a slightly nauseating effect. Either that or as I age, my centre of gravity isn't functioning as ably! Perhaps the electronically controlled dampers would do a better job of negating those last vestiges of body roll and pitch. Assuming urban conditions though the ride quality should be just what the doctor ordered.

You get three driving modes in the C-Class, shifting through eco, normal and sport alters the engine maps and shift points for the transmission in addition to adding or reducing weight from the steering. In either mode, the steering effort is light, even in sport mode the resistance is just right to give you the precision you'd need.

This new Mercedes-Benz packs in a significant amount of technology, while there is the engine side tech in the form of the ISG, there is a lot more to enhance comfort and convenience. You get the latest 7th gen NTG (New Telematics Generation) system that brings significant advancements to voice commands, smartphone integration, navigation and biometric authentication, OTAs, and a car to cloud communication array. The last is especially important as it allows car to car communication with data being exchanged between Mercedes-Benz vehicles that helps identify and spread the word about a variety of hazards. This makes the entire driving experience much safer, as on a given route one C-Class can make another aware of obstructions, hazards and even road surface conditions. Yet there is one feature missing that should by now be commonplace in a car of this order, ventilated seats! 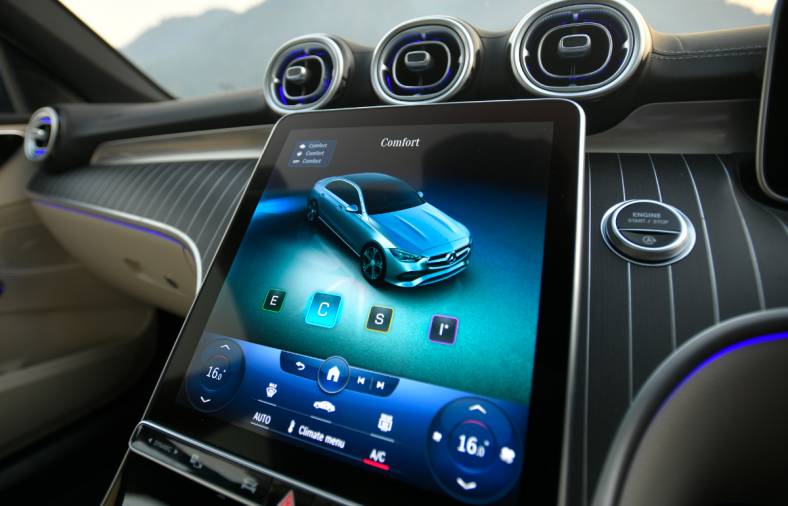 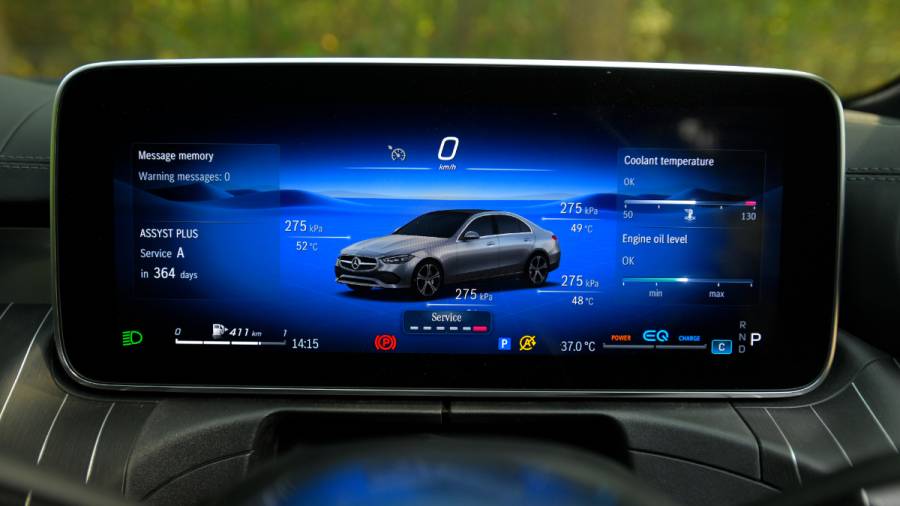 Most of the features work seamlessly and without the intervention of the driver, others require a few settings to be activated. One interesting feature is the addition of 3D maps that identify key landmarks and throw those up as 3-dimensional graphics on the map. It's a novel way to identify landmarks which would interest you, but this isn't new to the market. I recollect using the system on the Audi Q5 almost a decade ago. I also think Mercedes needs to associate with a better maps provider. We did a simple comparison between Google Maps on our smartphones and the integrated navigation system and Google beat it hands down with better navigation and quicker real-time updates to the routing. So you're better off using Android Auto or Apple CarPlay. 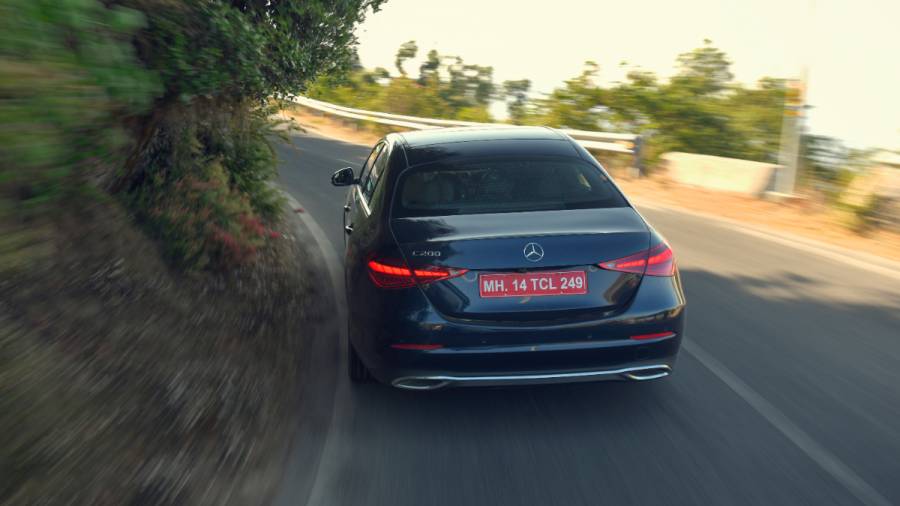 The C-Class is now a critical step up the ladder for those looking to move higher up the chain in luxury mobility. It once was the entry-level luxury sedan most aspired for, but with the A-Class stepping in, it has definitely matured, offering much more than expected in a manner most would appreciate. That it emulates the S-Class is a nice homage to the flagship, but don't let that be the focal point of why you'd buy this car. The new C-Class has its own unique identity, and its own space. It is a lot more than where it started off on its journey almost 4 decades ago and for that, it earns a lot of respect. Calling it the baby Benz, nah, its not a baby any longer. Prices for the 2022 Mercedes-Benz C-Class should start from over Rs 50 lakh.