The Jaguar F-Pace occupies a distinct space in the world of luxury SUVs. It's a smidgen larger than the likes of the X3 and GLC but not quite as large as something like an X5 or GLE. And if Jaguar's ambitious electrification plans come to fruition, it'll probably be turned into something quite unrecognisable from its current form. Meanwhile, Jaguar has given it a fairly extensive mid-cycle update(it's been around since 2016) to tide it through this transitory phase. So what do these changes do for this outlier, if you will, in the ever-growing luxury SUV sphere? 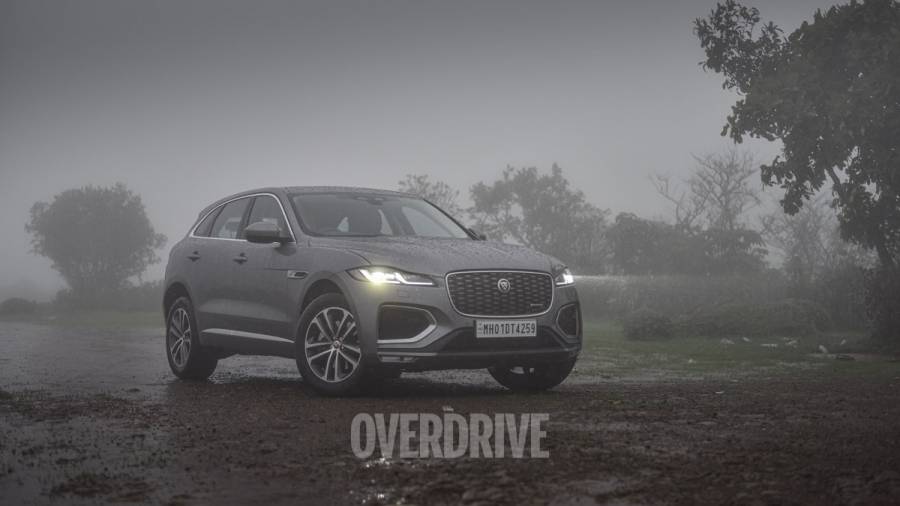 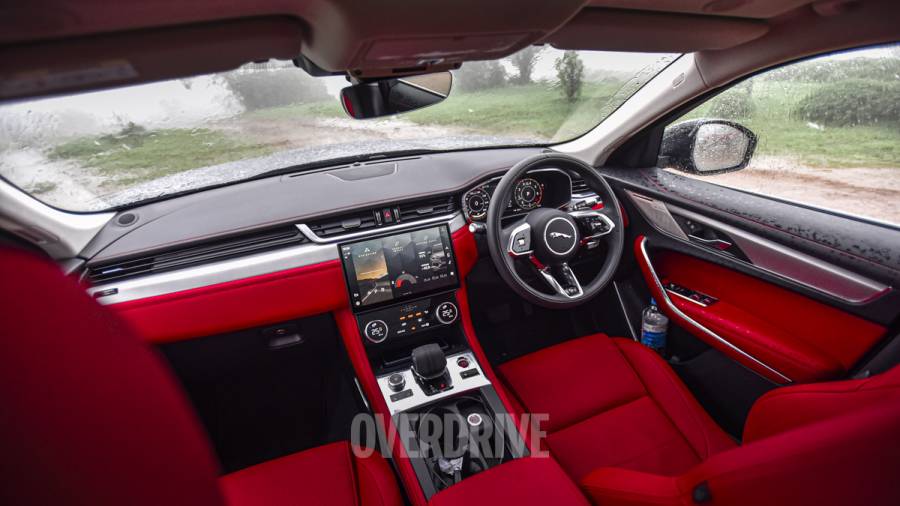 From the outside, there might seem to be nothing extensive about the changes made to the 2021 Jaguar F-Pace. But step inside and the SUV is almost unrecognizable from its earlier version. That dark, somewhat featureless interior has been replaced with a far more contemporary and rich looking space. The Mars Red colour scheme in our car, a tan option is also available, is attention-grabbing and is far more tasteful than what you would expect a bright red interior to be.

The layout itself is quite typical of cars in this price bracket, with a high cowl and horizontally themed elements. The strakes along the air vents and the ribbed aluminium panels all feel great to look at and touch, as does the soft-touch leather that covers pretty much every surface. Even the footwell plastics are soft-touch, quite uncommon even at this end of the price bracket. 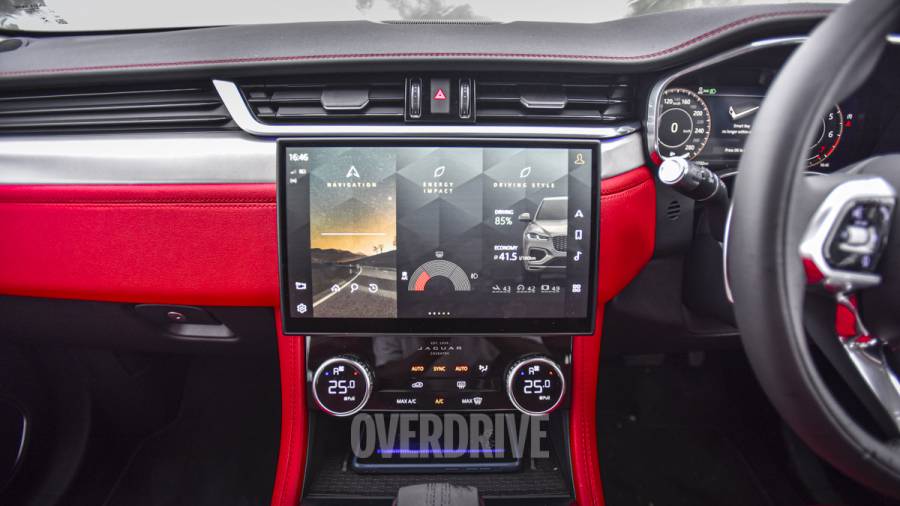 The centrepiece of the 2021 Jaguar F-Pace cabin though is the new curved Pivi Pro touchscreen. It's a bigger jump than the rest of the cabin, with a better-resolved display, crisper transitions and a more intuitive layout. It even has a separate power source that helps pair your phone almost immediately after you've stepped into the cabin, which goes well with the crisp Android Auto integration. However, it did glitch on us occasionally and the absence of wireless Android Auto/Apple Carplay was a stark miss. But with SOTA capabilities we hope these issues will be fixed over time. 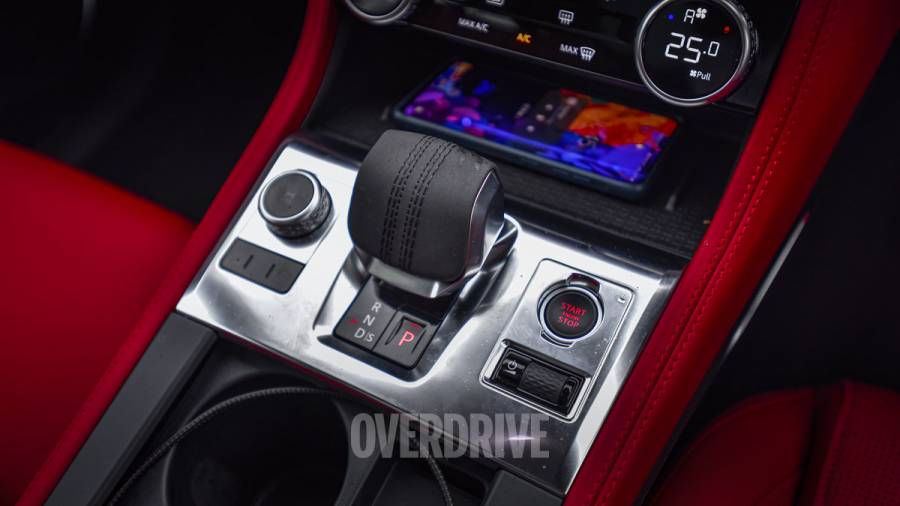 The gloss black climate controls and the aluminium-cased centre console is again fully new and much better executed than before. It goes with the artsy feel of the rest of the cabin and is largely intuitive to use, especially the leather-stubbed shifter which is quite a bit less fiddly than the rotary dial from earlier. But we would have liked the rotary climate knobs to have been a bit less plasticky while the capacitive switches around here could have been a bit more tactile as well. 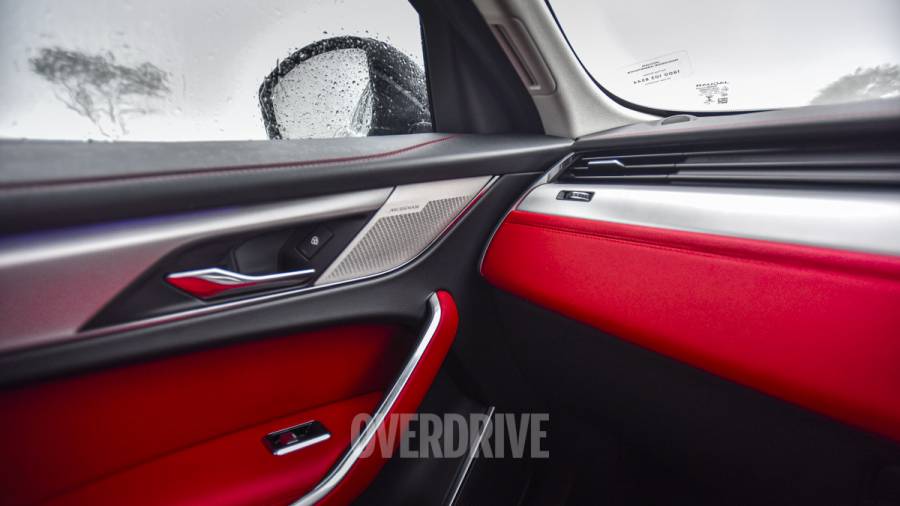 The new door cards have fixed the odd window switch layout and added quite a bit more storage space than before. There is space now to rest your arms on the sill, where the contrasting stitching looks quite neat. Rear seat passengers have it good like earlier, the 2021 Jaguar F-Pace is wider than the likes of the X3 and this shows here. There is enough room for your feet and the reclining seats offer good support and a nice angle of recline. Ingress/egress into both rows is uneventful and the large panoramic sunroof with the light headlining means that chauffeured owners will enjoy the F-Pace. 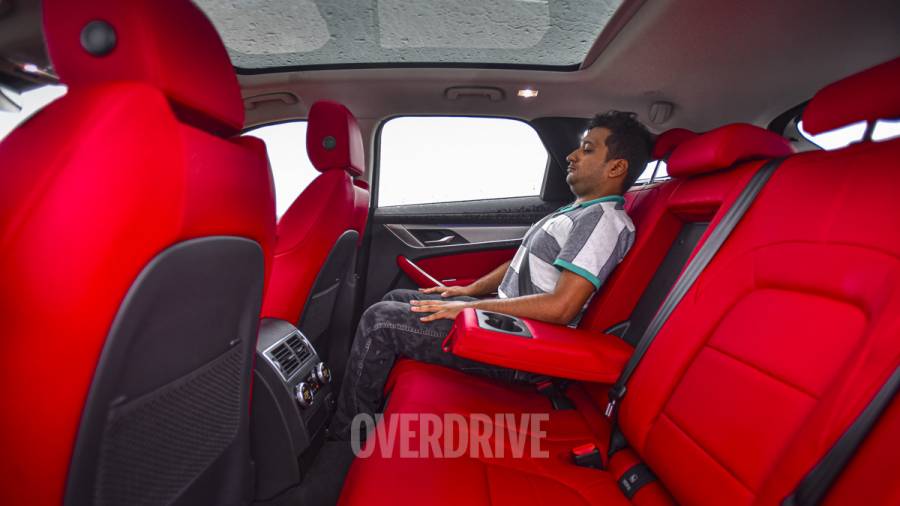 These owners will also like the four-zone climate control and the deep Meridian audio system, although rear sunshades and ventilated front seats should have been included given the Jaguar's premium pricing. Safety features remain unchanged from earlier with front side and curtain airbags and a new 360-degree camera system, although the useful lane-departure warning system from the earlier version has been dropped inexplicably. 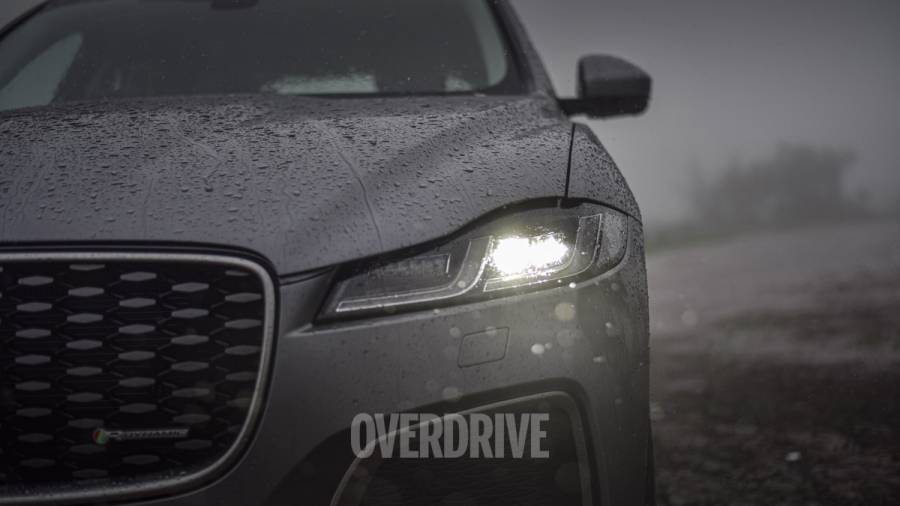 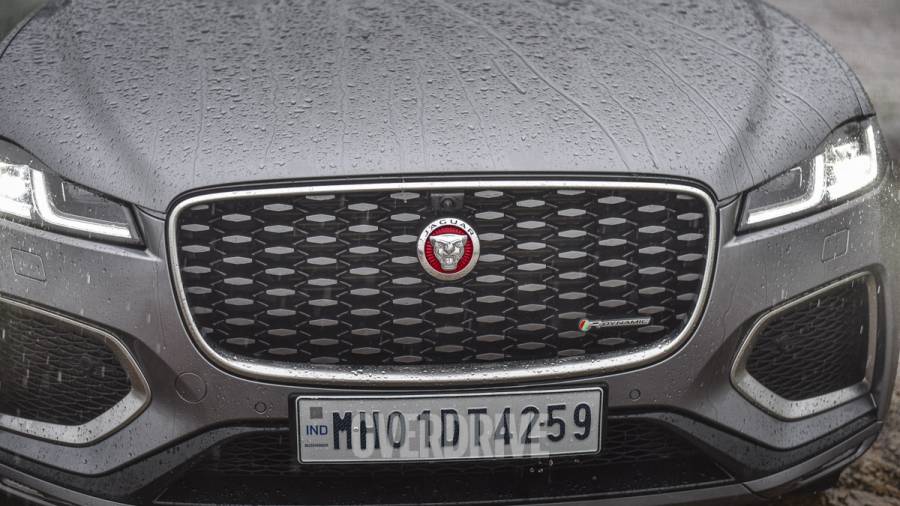 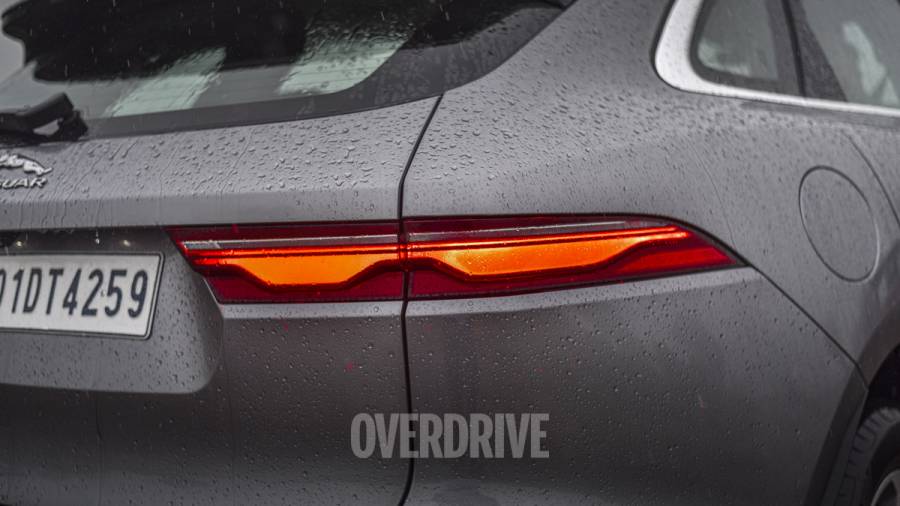 A closer look reveals that the facelifted Jaguar F-Pace looks much fresher on the outside too. The larger, brushed chrome studded grille and the slimmer headlamps work well with the bugged new bonnet to keep a svelte look intact. The new design for the 19-inch wheels and slimmer taillamps create the same effect as well. The India-spec F-Pace is now only available in the R-Dynamic design package which adds sharper bumper details and gels quite naturally with the coupe-esque shape of the Jaguar. 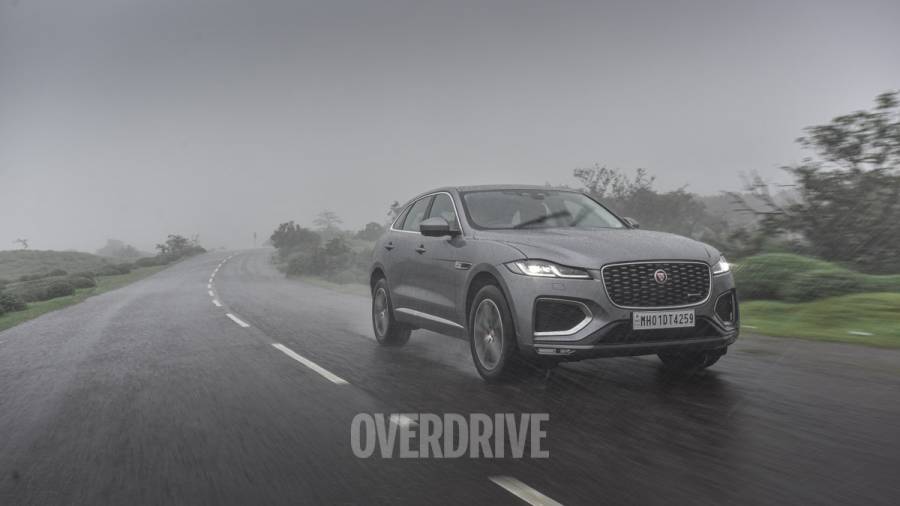 The Jaguar F-Pace remains mechanically unchanged from earlier and continues to offer that very Jaguar-like mix of driver involvement and comfort when it's on the move. As the driver, you don't sit too high but the new bonnet gives you a very good view out the front. Like we've stated earlier, this new-style Jaguar steering is one of the best of its kind around, especially with cold stainless steel paddles which work in satisfying clicks on the few occasions you might have use for them.

The variable-ratio tuning, which quickens the steering quite naturally as you build speed or dial in lock, gives the F-Pace a sense of agility in most driving situations that's not very common in an SUV that weighs well over 1,800 kg despite its aluminium construction. There is some body-roll as a result of this and the generous 200mm ground clearance, but again these movements are progressive and very well contained. We wouldn't call it light on its feet but whether you're negotiating traffic on a daily commute or heading up to the hills for a getaway, the F-Pace offers up a confident, agile driving experience. 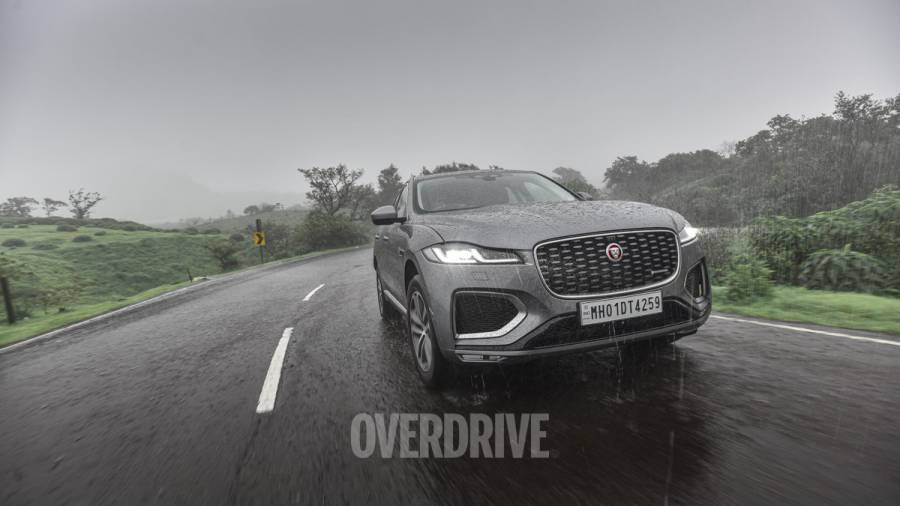 The AWD system, which is natively rear-wheel drive, has a role to play here, it'll only send torque to the front axle when accelerating or around bends. There's also a brake-based torque-vectoring system that brakes the inner wheel to send more power to the outer one. We noticed this work quite well at keeping things under control around high-peed bends out on the highway.

And with mechanicals being shared with the likes of the Range Rover Velar, the F-Pace combines this litheness with a very Land Rover-like feeling of indestructibility. This was especially apparent in the way it tackled the monsoon battered Mumbai roads in the time we spent with it. The steel springs do a very good job of isolating bumps and undulations from the cabin, even the tricky sharp ones, and the SUV retains a comfortable and level ride in most situations. 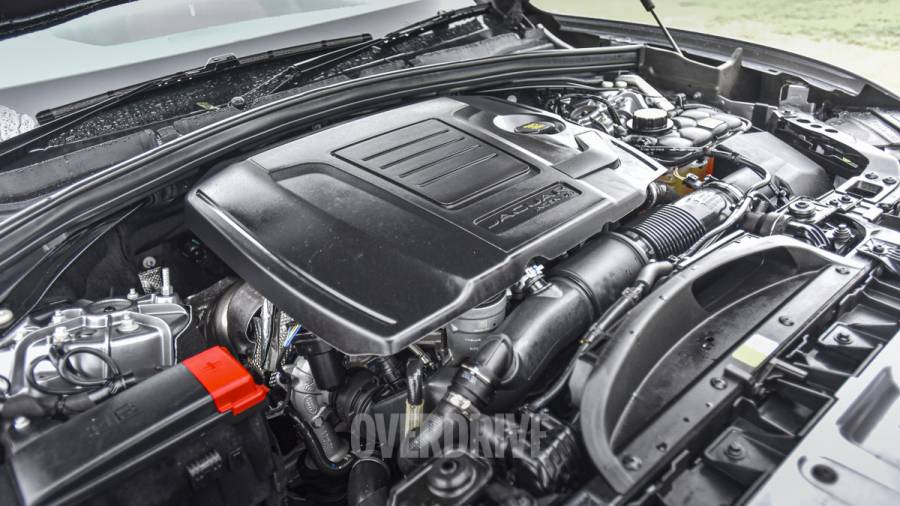 With this update the Jaguar F-Pace is paired with a new diesel engine, the P250 petrol here is carried over largely unchanged. This 2.0-litre turbo-petrol from JLR's Ingenium family offers 250PS and 365 Nm, the latter a slight deficit to some rivals. But this torque comes in quite low and with the SUV's generally agile demeanour, there's never a situation where it feels outgunned. A fairly realistic speaker-enhanced growl helps this sense too. But the throttle pedal feels quite sharp at initial input that can catch you out in stop-go situations. We would have liked the 8-speed ZF torque converter to have been a bit more alert in these situations too, but switching to the S gearbox mode controls this to an extent.

But with the F-Pace's higher asking price, we can't help but yearn for a more powerful engine option. Maybe the 300PS version of this motor from the Defender or even the new mild-hybrid 3.0-litre would have ramped up the excitement further. This 2.0-litre's quite flat, featureless power delivery doesn't help this sense either. 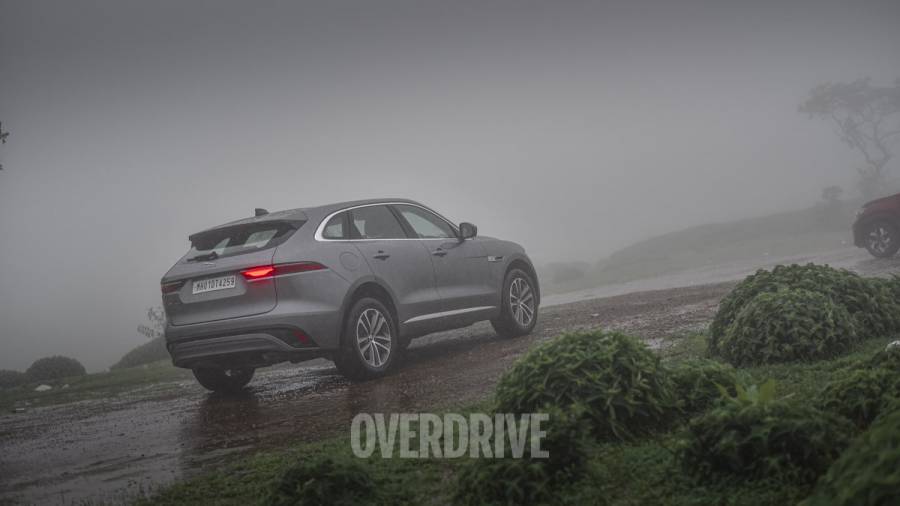 The Jaguar F-Pace really should sell better than it does, it offers up an experience that is quite distinctive and rewarding enough to satisfy if you like driving or just lounging in the back seat. We would have liked to have seen more features and maybe a livelier motor, but you can be certain that the Rs 84 lakh, on-road, that you spend on it will seem entirely worth the outlay, especially with the far better-executed interior. 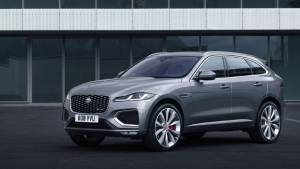