With the 3 Series Gran Limousine and the 6 Series GT covering off either end, BMW India has made sure that the BMW 5 Series can continue to do what it is best known for: being a luxury sedan that does driver involvement as well as it does luxury. But having been around since 2017, it was due for a nip-and-tuck. Now that that has happened, we'll try and see if the 5 Series playbook remains intact with this update. 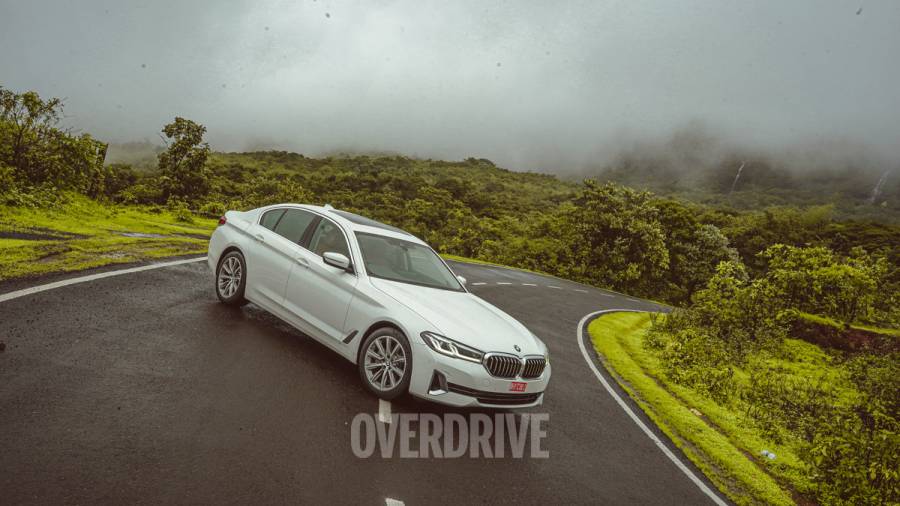 This facelift has let BMW bring the 5 Series visually in line with the rest of the BMW sedan line-up. The Luxury Line trim we're driving is geared more towards highlighting the 5 Series' appeal as a consummate luxury car, a more driver-focused M Sport version is also available, and the visual changes are attuned to this. So you get a new front with the slimmer LED headlamps(Laser in MSport) and L-shaped DRLs while the grille has thankfully not become disproportionately large, with its new single-piece design. The bumpers have been simplified with a full-width air dam in this version and with the foglamps now gone, there are quite tasteful chrome elements replacing them. 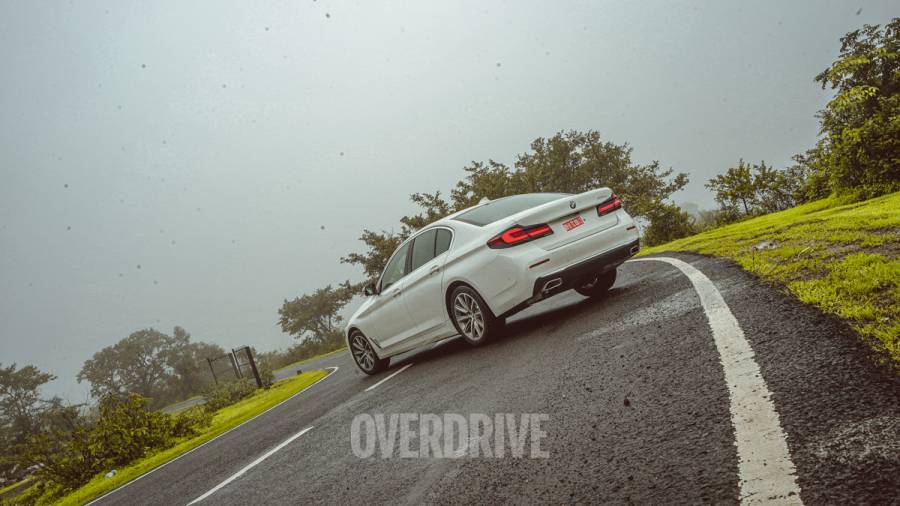 It must be said that these changes are effective, even in this unassuming shade of white, and with the more organic-looking L-shaped LED tail lamps and the prominent(and functional) exhaust tips, the revised 5 Series continues to look stately yet athletic. But with no prominent sheet metal changes like in the new E-Class LWB, the tauter look of the 3 Series hasn't been fully recreated here. Just about 27mm has been added to the length of the 5 Series but the wheelbase remains unchanged. 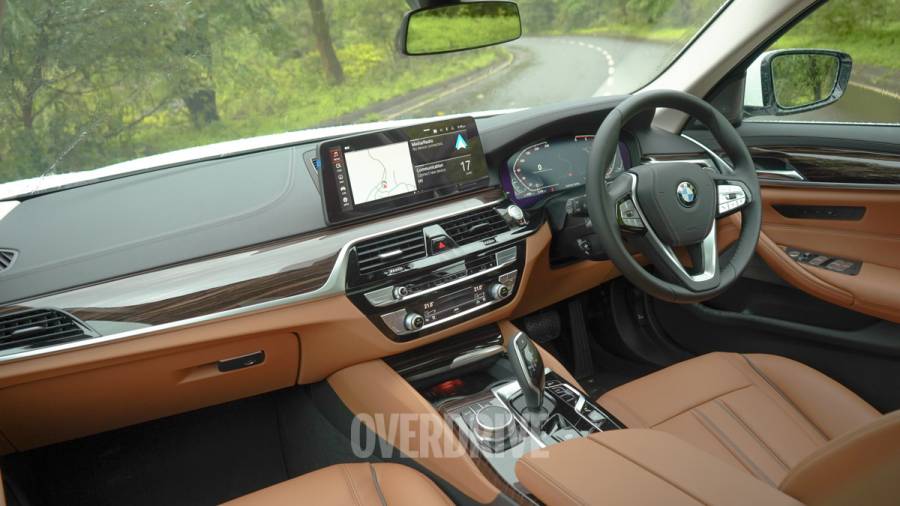 Similarly, incremental changes continue on the inside. The larger 12.3-inch iDrive screen makes its way here as does the new-style 12.3-inch driver's display. The touchscreen is a bit of a reach but adds a much more modern touch to the cabin with its crisp menus and many tactile redundancies. BMW may have been late to Android Auto integration, but now does it better than anyone else with a high-res, dual pane display and seamless pairing. We still haven't got around to reconcile with the inverted BMW digital dials but it does get the job done in regular driving. Other than this, the dash continues with the older last-gen layout, which may not exactly be a bad thing. The banks of tactile buttons seem much more intuitive to use than the touch-control dashboards we're now seeing take over cars across segments. Although, like in the revised X3/X4, the more condensed switches from the 3 Series could have made for a more contemporary look. 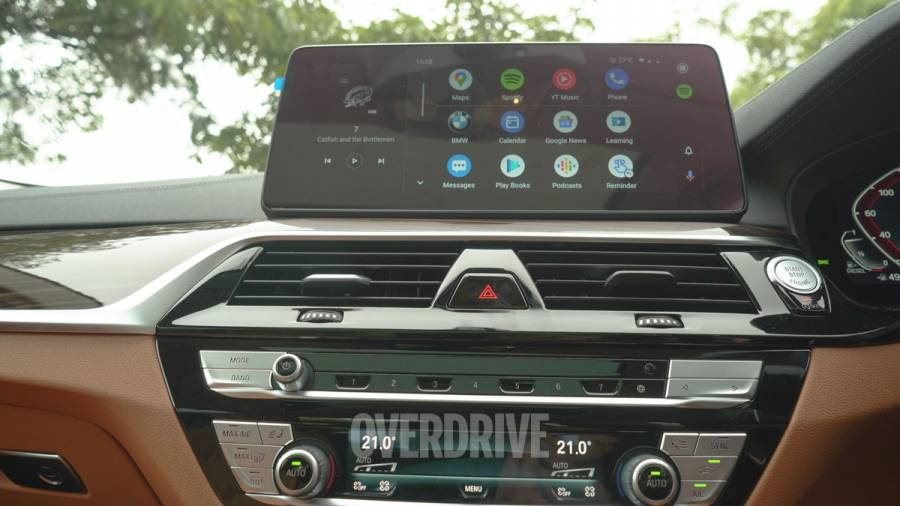 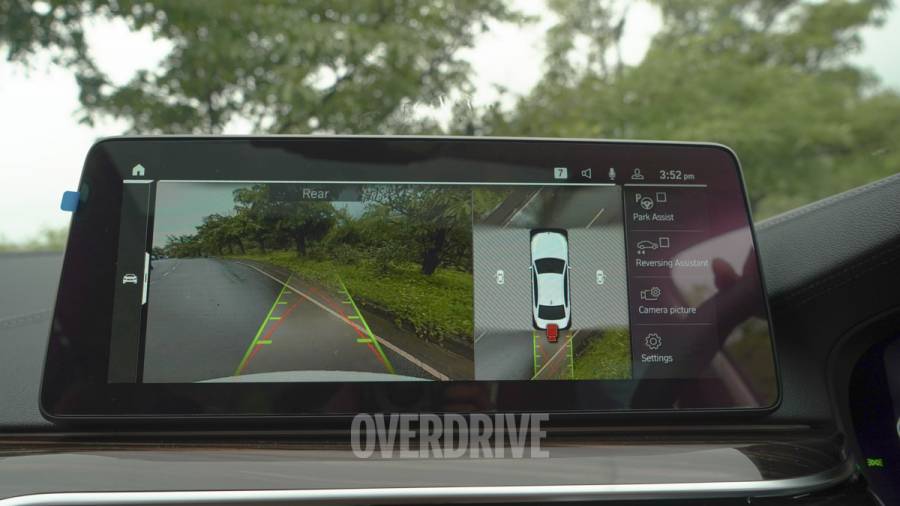 The tan and wood theme of our car looks and feels rich, and general quality is segment-leading as always, but sportier options are also available with the M Sport variants. These cars also get the more snug sport front seats. Although the standard seats get lumbar support with this update, we would have also liked to see extendable squabs and a ventilation function. Other tech on the 5 Series includes gesture control, voice assistant and reversing assistant which works with a very useful 360-degree camera set-up. No connected-tech though, although the display key does add remote start and cooling functionality, as well as the remote park feature. 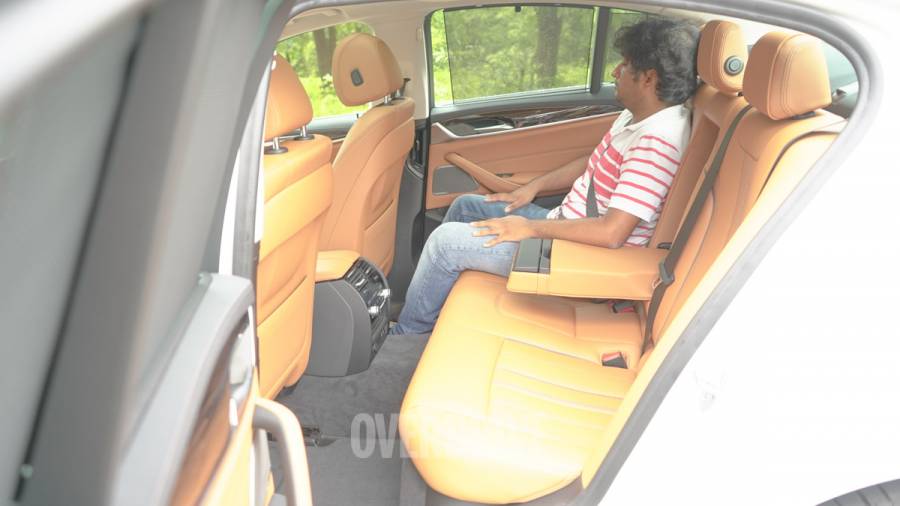 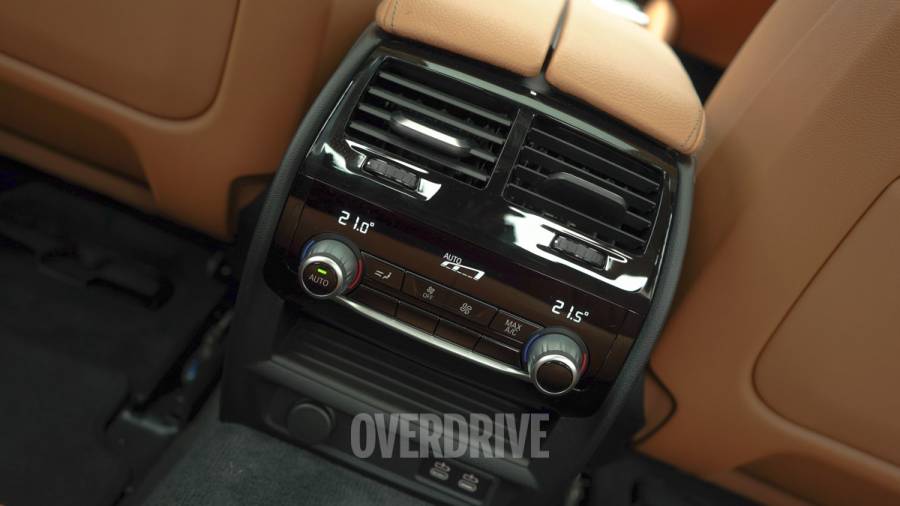 In the rear, there's enough for most large adults with a wide bench and large windows. But if rear-seat comfort is at the top of your wishlist, the 6 GT may be the better fit. It is geared more towards the rear passenger than the 5 Series. That's not to say that the 5 Series will leave you wanting. The seats are softy cushioned, there are sunblinds for the windows and there's now four-zone climate control as standard if the shorter sunroof turns out to be a put-off. 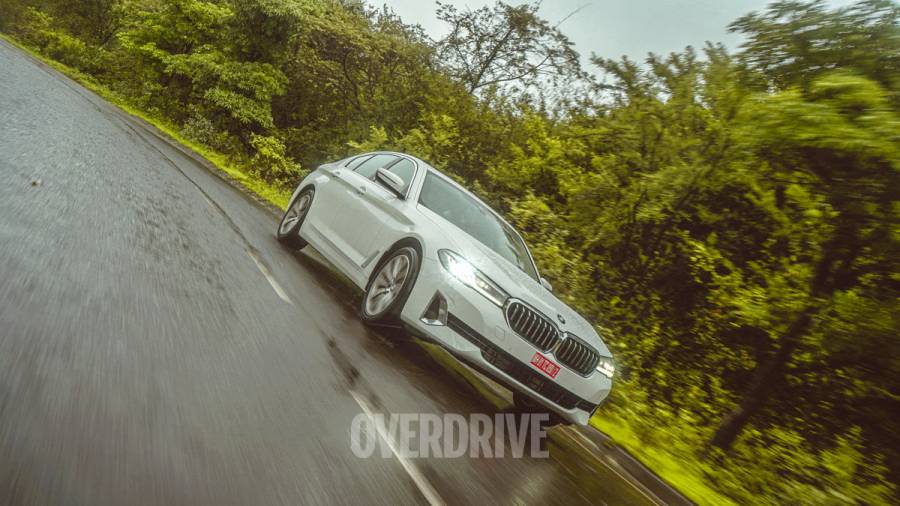 Quite out of character for a 5 Series, the first thing you notice on the move is the exceptional ride quality. Even with the aggressive 245/45 R18 wheels on this version, the mechanical adaptive suspension set does a very good job of isolating you from the road. There's only the slightest float at triple-digit speeds but everywhere else, the set-up works well to keep any kind of imperfection out of the cabin. There aren't too many untoward body movements either. Further, while driving through a deluge to get to our shoot, the 5 Series felt completely secure over standing water and a slippery road surface at relatively high speeds. 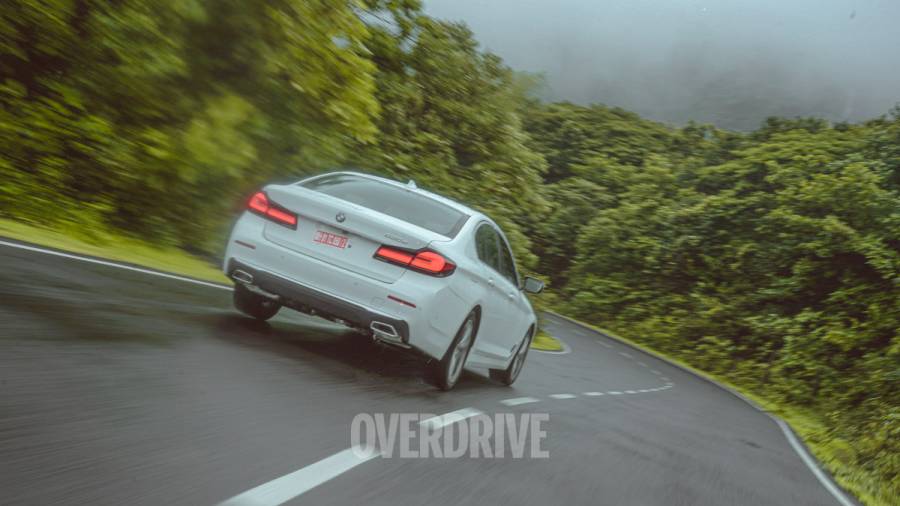 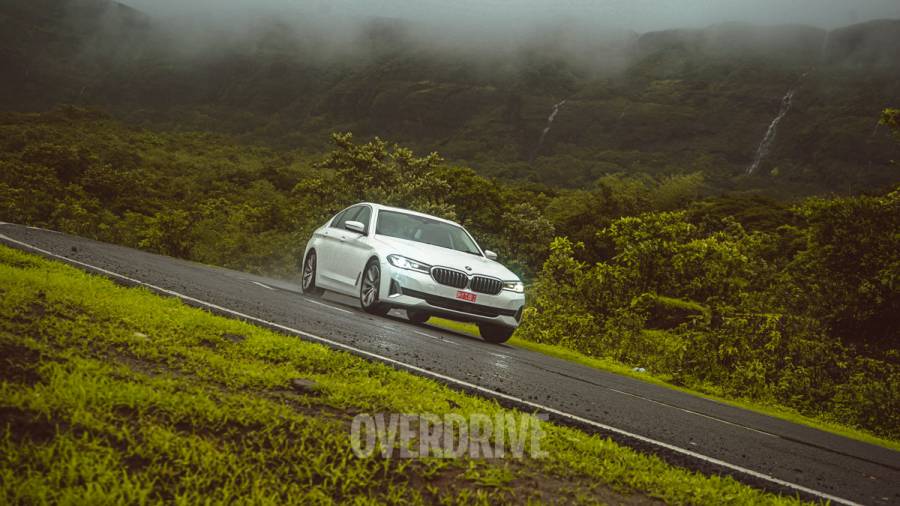 There's not much in how the suspension behaves in the Comfort, Sport or Adaptive settings in regular use. Although in the most aggressive mode, the 5 Series seems fully committed to its heritage. The little float we complained of largely disappears but with no real hit to ride comfort. There's quite a bit of heft and precision added to the steering wheel, and around a winding road, the typically balanced, light-footed agility that you expect in a BMW is quite apparent. There is a touch of roll here but it's progressive and predictable. 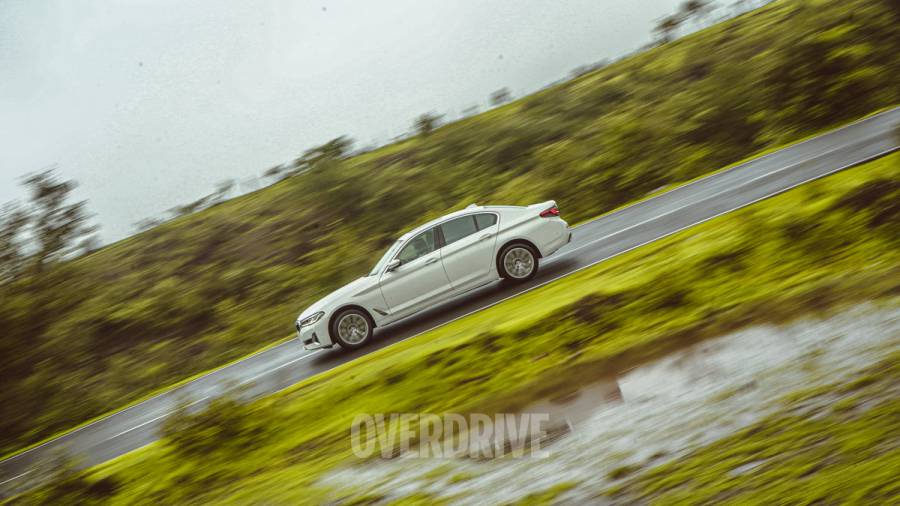 A spirited drive also highlights the only real drawback to the 520d's driving experience. In daily use, the 2.0-litre diesel is quiet and largely goes about its business unassumingly, leaving little cause for complaint. There's enough shove when you need it, either for overtakes or for a calm highway cruise. But wring it out and the relatively low 190PS power output and the narrow band in which the substantial 400 Nm torque is available becomes highlighted. The eight-speed ZF is as intuitive here as anywhere else but the narrow powerband leaves it swapping gear more often than you'd wish for. But the pay-off here is the impressive efficiency figures. We suspect the 530i MSport with its higher outputs and M-tuned suspension may be the pick for the driving enthusiast with a similar budget. 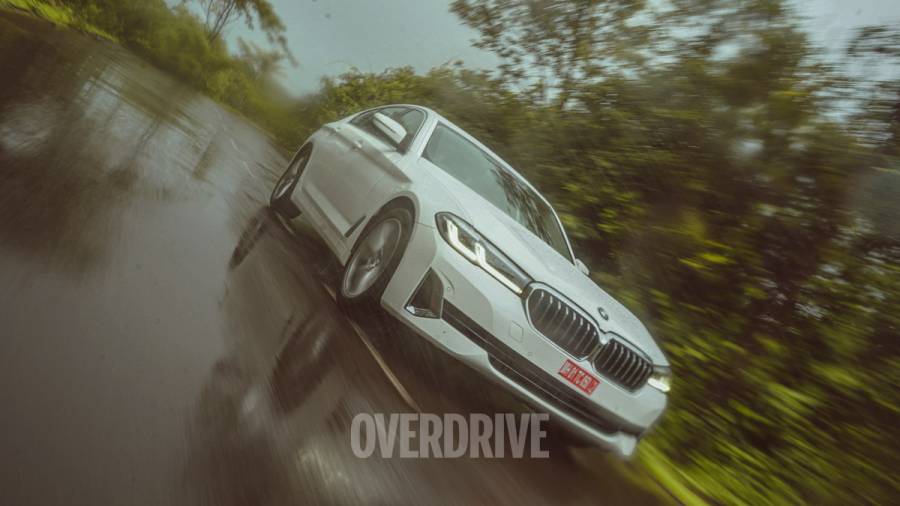 Priced at Rs 63.90 lakh(ex-showroom) for this 520d Luxury Line version, the facelifted BMW 5 Series finds itself a bit too close to the more spacious E-Class in price to fully carve out its niche. But the 5 Series draws its appeal from being as comfortable as it is engaging. There are most amenities you'd need to be comfortable with, more than rivals, and the updated looks make it as modern to look at as any other car. The three powertrain options will also let you choose one that suits your usage best. If there's one luxury car you need to cover all bases, this should be it. 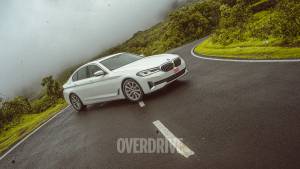 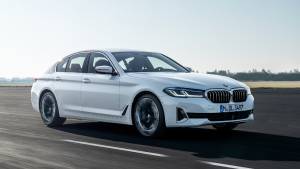