Toby Sowery of the UK won the 2014 round of the MRF Challenge Championship at the MMRT racetrack in Irungattukottai, Chennai. The 18-year old driver also became the youngest driver to have accomplished this feat after securing a podium position in the third and final round of the championship. Toby Sowery bagged the championship title with 221 points followed by Ryan Cullen who scored 174 points. India's Raj Bharath finished third. 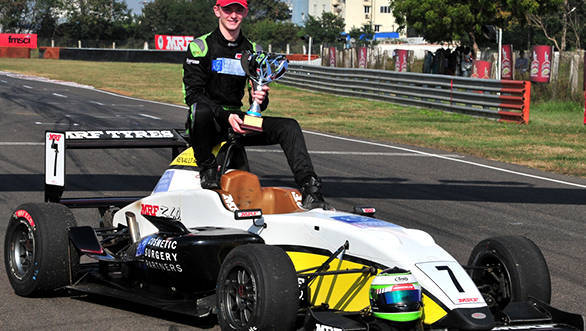 Speaking about his win, Toby Sowery said,"It is just an unbelievable feeling to win this title. It felt great to fight with such good drivers in what was a highly competitive field. A big thank you to MRF and the organisers for doing such a great job and giving me such a good car to fight with. Every race, every round has been a challenge so I am happy to come away with the title. Driving in Chennai has been unbelievable and from the first session, I have felt comfortable on this circuit and am happy to win the title here. I hope to use this experience to help me in my next season as well. " The action packed race saw Ryan Cullen pilot the 210PS Formula MRF 2000 racecar to the top step of the podium followed by Sowery and King. The MRF Challenge Championship presents itself as a stepping stone for budding race drivers to higher classes like Formula 2, GP2 and British Formula 3. The cars are built to FIA F3 crash safety specs and are powered by a Renault Sport engine which is mated to a 6-speed transmission by Hewland.

The MRF FF1600 category was won by by Arjun Narendran who said, "This weekend has been perfect for me with three wins. I was happy to be so competitive in the MRF FF1600 category as I was not happy with the races I did here last year. These cars are really good and the competition is so close and fierce that it is really enjoyable to battle with these guys."