As far as eye-opening motorsport conversations go, I think a quick little chat I had with John McGuinness back at the 2013 Macau Grand Prix ranks higher than most. It had been hard to track McGuinness down that sunny day at Macau, with his mechanics chuckling and telling me that the reason I couldn't find him was probably because he was still napping in his hotel room. When I finally did find him, he was puffing away on an inhaler, prepping to go out on track, but willing to speak with me before leaving. I remember him telling me how, before any big race, he still got scared. He said it very matter-of-factly, emphasising that everybody got scared. And then he quickly clarified, "Once you're on the bike, you're not afraid. You're just doing your best."

The fact that McGuinness when he was just doing his best, was far superior to most of us when we are just doing our best, wasn't lost on me. But back then, his acknowledgement of the very concept of fear, was something I appreciated. It was a dismissal of "absolute fearlessness" - something that I have always been wary of - as a prerequisite for success in any field. Instead, there was a 20-time Isle of Man TT winner (he's won four more TTs since then) saying that it was okay to be afraid. So long, of course, as one didn't allow that fear to grow so large that it became debilitating. That it got in the way. That it proved to be a destructive force that prevented one from achieving what it was that one wanted to achieve.

And so it is that every year around the time of the Macau Grand Prix, I find myself thinking about McGuinness and what he said. After all, it is hard to think of the race weekend at Macau, without getting a slightly uneasy feeling. Certainly, the narrow street track, bordered in some sections by granite walls, produces some of the most exciting racing in the world. But there's no denying that Macau also produces some pretty spectacular, and sometimes outright horrifying, crashes. At the 2017 edition, during qualifying for the FIA GT World Cup, a 16-car pile-up took place. And while no injuries were reported at that time, this year things couldn't have been more different.

Chances are that you have already seen the crash that I'm about to describe. If you haven't, run a quick Google search for "2018 Macau GP crash", and you'll find videos, from many different angles, of German F3 racer Sophia Flörsch's Van Amersfoort Racing Dallara-Mercedes flying backwards through the air into the catch fencing, colliding ultimately with a photographer's enclosure. It was a grizzly crash, to say the least, and five people - Flörsch, Japanese racer Sho Tsuboi, two photographers and one marshal - were injured. As we type these words out, Flörsch is recovering from surgery of her spinal cord. The good news is that the team of doctors treating her have stated that there is no risk of paralysis in her case. Flörsch has gotten very, very lucky. In this terribly dangerous and often cruel sport that we insist on loving, things are very often much, much worse. 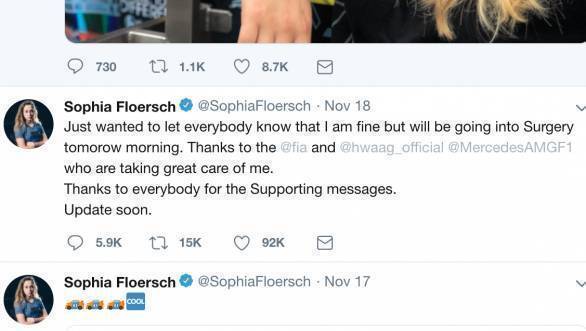 Sophia Floersch reassured her fans before going into surgery

When the videos of the crash first surfaced, wishes for Flörsch's speedy recovery poured in from various quarters. Amidst a slew of F1 drivers, and other prominent racers from various disciplines of motorsport, was a tweet from Robert Wickens. "Stay strong, Sophia. Fight the fight," he'd written. And if there's anyone who knows a thing or two about fighting the fight, it is Wickens. The Canadian driver was involved in one of the worst crashes in recent times, at an IndyCar race at the Pocono Raceway in August this year. His car was launched over the nose cone of a rival's machine, straight into the catch fencing. The extent of his injuries was horrific - a thoracic spinal fracture, a neck fracture, tibia and fibula fractures to both legs, fractures in both hands, a fractured right forearm, a fractured elbow, four fractured ribs, a pulmonary contusion, and an indeterminate spinal injury. Wickens has since been undergoing rehabilitation at a facility in Colorado, adjusting to life as a paraplegic, but also, determined to someday walk again. By all accounts, Wickens seems to be tackling life, adversity, and the uphill journey that he now must go on, with nothing but courage. Dollops and dollops of the stuff. And if one goes through his social media feed, it is evident that he has suffered no injury to his sense of humour. 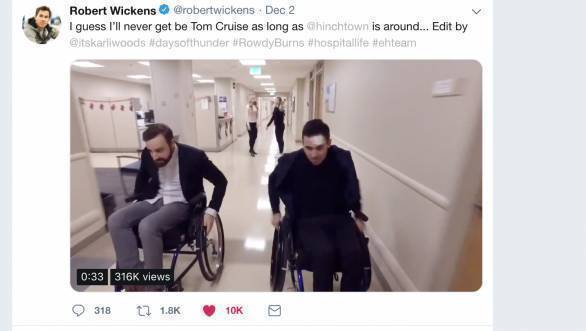 But no conversation about racers facing adversity with an undiminished sense of humour, can be complete without speaking of young Billy Monger, who, since his crash in 2016, has been a double amputee. The eternally cheerful racer has made quite a comeback, ending his 2018 British F3 campaign with two poles, three fastest laps, four podiums, and 301 points leaving him sixth in the championship standings. Monger is determined to make it to F1, no matter what. 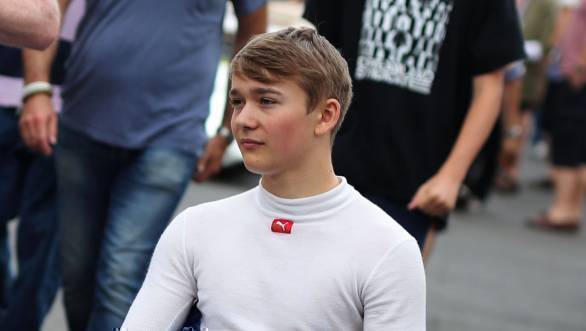 Billy Monger won so very many accolades in 2018 for his bravery, resilience, and results on track!

So this December, as the year comes to a close, and as we celebrate various motorsport champions, and winners of various prestigious motor racing events, let's not forget the ones who might not have trophies or medals to show for their efforts, but are victors in the truest sense of the word. Having tackled fear with courage of conviction, resilience of spirit, and derring do - these are the real heroes.

This column first appeared in the December 2018 issue of OVERDRIVE magazine.