The fifth and sixth races of the Nissan Micra Cup at the Circuit Mont-Tremblant in Quebec signalled the end of the first half of the season. The round was also undoubtedly the best so far for Indian driver, and 2014 Nissan GT Academy India winner, Abhinay Bikkani. Of the two races held, Bikkani won both, giving him valuable points that helped him move up to fourth place in the championship standings. 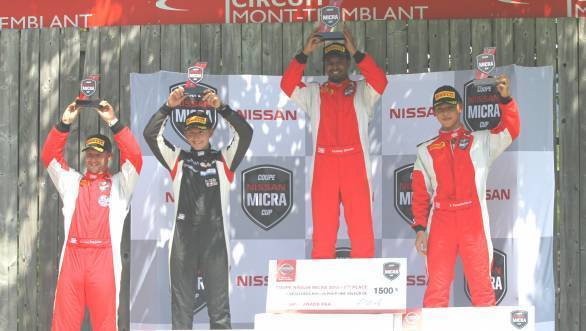 It was Thai driver Thanaroj Thanasitnitikate who was on pole for the first race on Saturday. During the first few laps he found himself unable to shake off a very persistent Bikkani, with Albertan driver Stefan Rzadzinski third. The fight for the lead extended all the way down to sixth place, with Olivier Bedard, Valerie Limoges and Valerie Chiasson also closing in. The last corner of the last lap, then, was when the all important pass for victory needed to be made, and it was Bikkani who emerged triumphant. Thanasitnitikate finished a mere three-tenths of a second behind, with Rzadzinski third.

The second race took place on Sunday afternoon, resulting in a hit that forced Metod Topolnik, Valerie Chiasson and Yves Aube to abandon the race early on. It was Bikkani, Thanasitnitikate and Rzadzinski who were bunched up at the head of the field, and proceeded to cross the finish line in that order.

The battle for the title now sees Thanasitnitikate in the lead with 216 points, ahead of second-placed Olivier Bedard with 202 points, and third placed Rzadzinski with 180 points. Bikkani, with 155 points, is fourth.

The next round of the championship will be held between July 31 and August 2, 2015 at Trois-Rivieres.