Mercedes-Benz has revealed the final iteration of the new-gen E-Class in the form of the Cabriolet. It will be making its public debut at the 2017 Geneva Motor Show. The other Cabriolet that would be standing beside the E-Class is the luxurious Mercedes-Maybach G 650 Landaulet. The new-gen E-Class Cabriolet has grown in dimensions and now measures 4826 mm (+123mm) in length, 1860 mm (+74mm) in width and 1428 mm (+30 mm) in height. The wheelbase too has been increased by 113 mm at 2873mm and that should benefit the rear occupants. Additionally, the front and rear track too have been increased by 67mm and 68mm respectively which will improve the driving dynamics of the sedan states Mercedes-Benz. In terms of design, the new E-Class Cabriolet borrows heavily from its Coupe counterpart and that is a good thing as the later does look impressive. We will still vote for the Cabriolet as the two offerings have a similar silhouette but the Cabrio takes the appeal a notch higher than the Coupe. The distinguishing part is the fabric roof instead of the sheet metal one on the Coupe. Merc claims that the fabric roof is made up of multiple layers to not let the ambient noise seep inside the cabin. It can be folded electrically in 20 seconds and at speeds of up to 50kmph. The roof can be availed in four colour options - black, red, blue and brown. The soft top has been derived from the S-Class Cabriolet. There is a retractable cover that separates the soft top from the 385-litre luggage boot space. 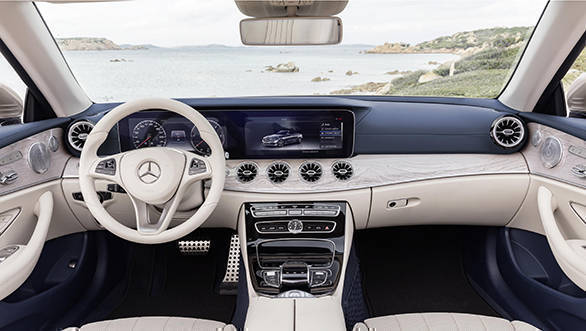 The cabin layout and the design in the E-Class Cabriolet have been carried over from the Coupe. It gets a 12.3-inch infotainment system that can be combined with a second screen behind the steering wheel. The infotainment also comes with an optional Car Play and Android Auto connectivity options. This screen offers a digital display of the instrument cluster. There are three different themes for the instrument cluster - classic, sport and progressive. The entry-level variants get the two round dials displayed on a 7-inch multi-information screen and a 8.4-inch infotainment screen. The Cabrio too gets all the goodness in terms of premium materials and plush interiors that Mercedes-Benz cars are known to have. 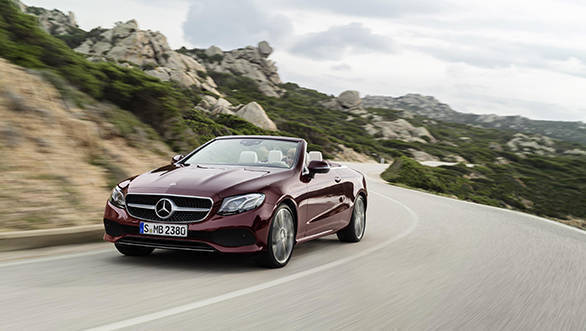 The German automobile manufacturer has stated that the new E-Class Cabriolet will get powerful and efficient petrol and diesel engines, including versions with 4MATIC permanent all-wheel drive for the first time. If the powertrain options are identical to that of the Coupe, the Cabriolet will come with a 2.0-litre diesel that put 190PS of power and a 3.0-litre V6 that makes 328PS of power and 480Nm mated to a 9-speed automatic unit that makes it into the E 400. We also expect a crazier Mercedes-AMG variant that will come equipped with 4.0-litre V8 bi-turbo engine. 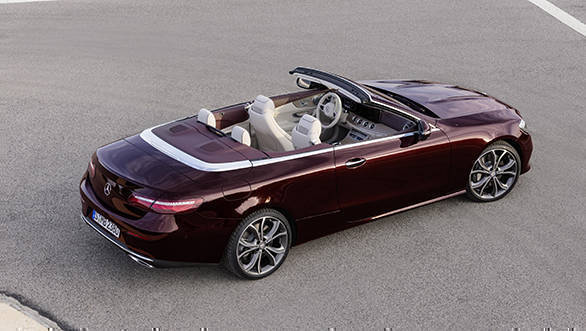 Mercedes-Benz will be launching a 25th Anniversary Edition of the E-Class Cabriolet to celebrate the 25 years of the launch of the first cabriolet 300 CE-24 in 1992. This special edition model gets 20-inch 5-twin-spoke alloy wheels, illuminated door sill panels with Mercedes-Benz lettering, floor mats with "25th Anniversary Edition" embroidery and a a choice of exterior paints between - the new colour rubellite red metallic or iridum silver.