Repsol Honda's Dani Pedrosa took his first MotoGP win this season on home soil at the Spanish GP. With a good start from pole position, Pedrosa managed to hold the lead right up to the end of the 3,000th MotoGP race. His teammate, Marc Marquez, took second place initially but he was soon in a battle with LCR Honda's Cal Crutchlow. Johann Zarco (Monster Yamaha Tech 3) quickly made his way past Movistar Yamaha's Valentino Rossi and eventually got behind Marquez. Meanwhile, Ducati's Jorge Lorenzo made his way up the ranks, getting past Rossi and his teammate, Maverick Viñales. Zarco managed to get past Marquez but only briefly, before the reigning champion regained second place. Crutchlow soon slid off the track, and so did Andrea Iannone (Team Suzuki Ecstar), after a short tousle with Viñales. 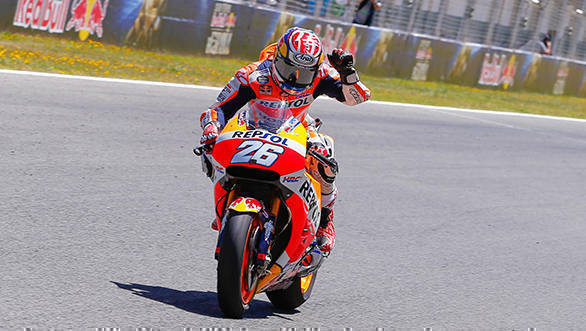 Rossi still leads the overall standings with 62 points, while Viñales is second, just two points behind him. Marc Marquez stands at third with 58 points while Pedrosa is fourth with 52.