Of recent editions of the 24 Hours of Le Mans, it is the 2017 running of the event that has proven to be the most unpredictable. Of course, last year's race was thrilling, and had people on the edges of their seats with the leading Toyota stopping on the final lap of the race. But this time around, the race was even more exciting. The battle between the Toyotas and the Porsches might not have been fierce on track, but the fact that reliability played such a key role in the event made the race very interesting. Nail-biting even! 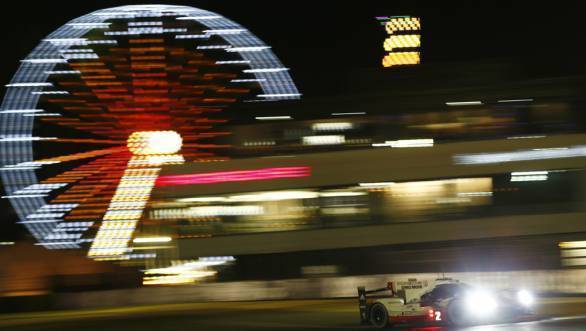 The No.2 Porsche 919 Hybrid making its way through Ford Chicane at night at the 24 Hours of Le Mans

Ultimately, after 24 long hours of racing, it was the No.2 Porsche 919 Hybrid that took the chequered flag first, with Timo Bernhard behind the wheel. This means Bernhard, who last won at Le Mans in 2010 with Audi, has finally won with Porsche, giving them their 19th Le Mans win. High time too, considering that he was the first driver to be signed on by Porsche, and has been a part of their Le Mans return project from the very beginning. This means that Earl Bamber is now a two-time Le Mans winner, while Bernhard and Bamber's team-mate Brendon Hartley has won his first Le Mans. 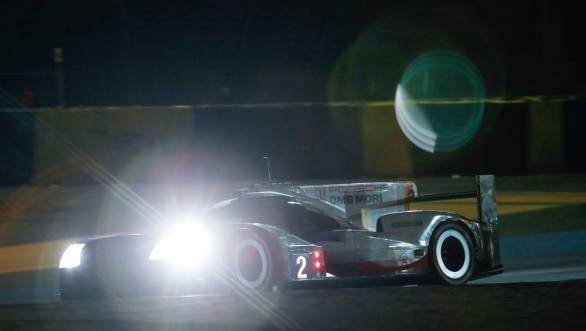 The No.2 919 Hybrid spent over an hour in the pits with electrical issues, that put it on the back foot early on in the race

It didn't look easy for the No.2 Porsche though, especially as during the early stages of the race, there was a vibration issue on the car, (caused by electrical issues that resulted in a loss of drive from the front axle). After the car was stationary in the pitlane for well over an hour, the Porsche crew managed to get the car back out on track. From then on, it was a steady climb up the order for the No.2 919 Hybrid. The fact that the No.8 Toyota of Kamui Kobayashi, Mike Conway and Stephane Sarrazin stopped in the night with a clutch issue, and then the No.9 Toyota of Nicolas Lapierre, Jose Maria Lopez and Yuji Kunimoto also went into retirement soon after, meant that the lead in the race went to the No.1 Porsche 919 Hybrid of Neel Jani, Andre Lotterer and Nick Tandy. 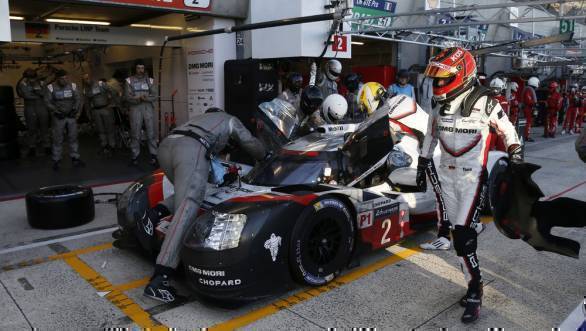 A pitstop for the No.2 Porsche. Note Timo Bernhard's red helmet instead of the usual yellow, a first for him, on the insistence of his three-year old son

The lead in the race remained unchanged even as the sun came up. But eventually, when Lotterer was about to begin the 21st hour at the Le Mans 24, his car began to coast. The radio message from the team said that the engine needed to be turned off, after which Lotterer did try to coast to the pitlane in the hopes of finishing the race. However, eventually it was clear that the race could not be resumed and the garage doors came down. 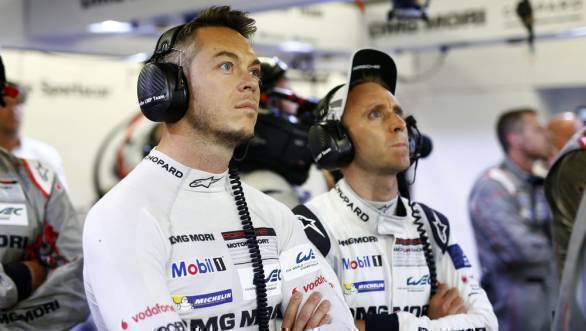 The tense faces of Andre Lotterer of the No.1 Porsche and the Bernhard really say it all

The lead passed to the No.38 LMP2 machine - Jackie Chan DC Racing's Oreca. While the drivers Thomas Laurent and Ho-Pin Tung managed to lead for a while, soon the No.2 Porsche overhauled them and moved into the lead. The car crossed the finish line first, with Bernhard behind the wheel, finally winning Le Mans with Porsche.