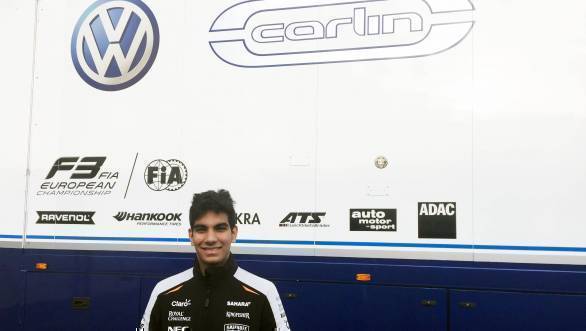 Jehan Daruvala will compete in the FIA Formula 3 European Championship in 2017. The 18-year old driver, who is a member of the Sahara Force India Academy, has been signed on by the Carlin team for the 2017 season of racing. Nearly every single Formula 1 driver of note has traversed the F3 path, including the likes of Michael Schumacher, Max Verstappen, Sebastian Vettel, Nico Rosberg and Lewis Hamilton.

Jehan's transition to Formula 3 follows his two rather successful seasons racing single-seaters in Formula Renault (both the NEC and Eurocup), where he had 11 podium places. Jehan then tested for various F3 teams, and was signed by Carlin after having proved to be one of the fastest drivers during their tests. Jehan will also race in the 2017 Toyota Racing Series in New Zealand just ahead of the European F3 season.

The 2017 Formula 3 championship will comprise 30 races held over 10 race weekends, where Jehan will pilot a car that weighs 240bhp and weighs approximately 565kg. Each of the three races held each weekend will be preceded by two practice sessions of 40 minutes each and two qualifying sessions of 20 minutes each.

Trevor Carlin, team boss of Carlin, said, "It's fantastic to have Jehan on board with us for 2017. He has already tested with us in the Formula 3 car and I have no doubt he will be competitive from the outset in his rookie season in the championship. Once again it's going to be a really close season of racing but Jehan is a strong addition to the team and we're already looking forward to the first weekend of the 2017 FIA Formula Three European Championship."

"I really enjoy driving the Formula 3 car, as I feel that the high downforce seems to suit my driving style. I am happy with how testing has been so far and I am really looking forward to my first season of Formula 3. It has been great working with Carlin, they are one of the best in the business. I must also thank Sahara Force India for all their vital support," Jehan said.