As a rider I'm at the level where I'm confident enough to push a machine, big or small, reasonably close to its limits. Now I'm not saying I'm the fastest rider in town, hell, I'm not even the quickest in the office but I am quite confident in my abilities and I know my way around a racetrack. So why was I sitting in a class room learning the very basics of riding a bike fast? It's like they say - never too late to learn. Since I've never been to a riding school I chose to start at the bottom - Level One of the TWO (Throttle Wide Open) Track School held by Indimotard in association with OVERDRIVE. 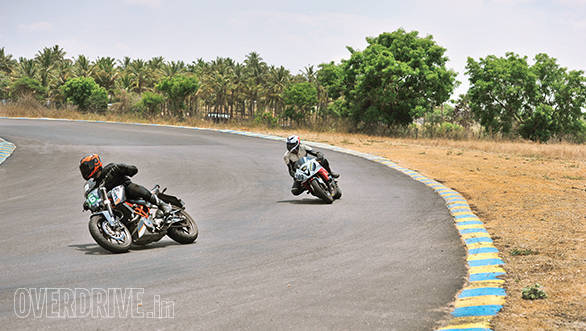 Predictably things started off in the classroom where we began with the basics of motorcycle suspension and how opening and closing the throttle affects it. As it would turn out, a huge part of my learning experience at the school would stem on throttle control. Now, I'm not going to go into the details of what Level One entails because we've already spoken about that a fair few times. Instead I'm going to tell you the three big things I learnt as a fairly skilled rider going back through the basics. 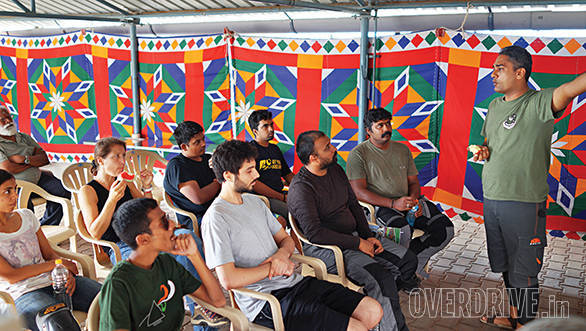 The basics count most

One gear, no brakes and as much throttle as you'd like. These were the conditions for one of the most important drills of the weekend. Plan your throttle such that you can keep lapping the circuit without touching the brakes. This drill was perhaps my most important lesson of the weekend. The mistake most of us make is rushing into a corner too fast because that feels like the logical way to go quickly. Nearly everyone knows the phrase, 'slow in fast out', but precious few have the willpower to put it to use. Not having brakes meant I didn't have the luxury to go quickly into corners and that left me time to focus on my right wrist. The golden rule is that once the throttle is open, it is steady or increasing. Shumi was one of the instructors and made us recite this a gazillion times so it's permanently stuck in my head. Job well done, sir. 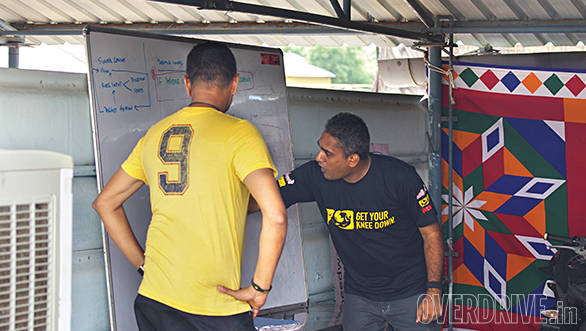 Shumi and Anand, the man behind Indimotard draw the basics of the racing line

Choppy throttle work is an absolute no-no as it destabilises the front end when you're at the limit of adhesion and can easily result in a crash. So the trick is to enter slow and try to get on the gas as quickly and as hard as possible. Once you start getting your corner exits well then you can gradually focus on increasing entry speeds. I've always known this but somehow never put it to use..

I have a unique problem of being tall and skinny. This means I find it terribly difficult to find riding pants that fit me - if I get my waist I don't get my length and vice-versa. Adapting my riding pants to allow some flexibility in the legs meant taking a knife to the knee armour, shaving about an inch off the length so it sits higher up in its pocket and allows my knee to move outwards (please don't try this unless you're sure of what you're doing). Fitting on the bike is another issue. I love my KTM 390 Duke but it is super compact and I just about fit on it on the street. But on the track I found that I couldn't quite lock my knees in properly as the rear seat wasn't letting me move back enough. I couldn't quite fit on my bike so Shumi had me get rid of the rear seat. Problem solved!

Shumi then had a brilliant if rather inelegant solution - take the rear seat off. That immediately helped me sit on the bike better which hugely boosted my confidence and pace. Whether it's on the track or just daily riding you'll often face challenges - learn to adapt

School makes you faster but safer

When you return from the racetrack everyone assumes your every ride is on the jagged edge but that couldn't be further from the truth. With my two days in school I am much more confident and faster. But I believe it has made me a better street rider too. Firstly, I've had my fill of pushing close to my limits in a safe environment so I simply don't need to push that hard on the road with all its uncertainties. But mainly, my mind now feels calmer and sharper on the bike. 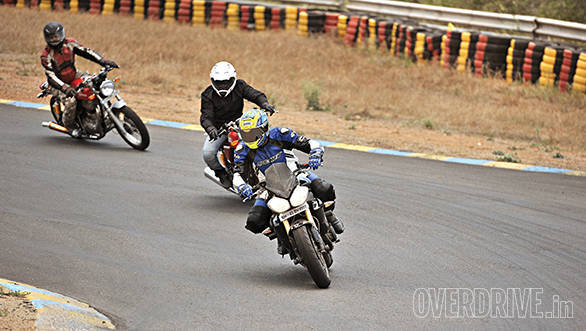 With riding fast, the key is to remain calm and focussed - stiffening up is a sign that you can no longer handle the pace. Staying relaxed lets your mind process more. At the track this includes braking points and corner markers but on the road it allows you to process more of the dangers around you. The more you see, the faster you are. After all, like Shumi pointed out in class, the difference between Valentino Rossi and us isn't so much how his brain controls his limbs, but how he perceives the world around him.