Nico Rosberg edged out team-mate Lewis Hamilton for pole at the Montreal track to take his second consecutive top spot start of the 2014 season. And while at Monaco there had been considerable debate about the manner in which Nico earned that pole position, at Montreal there was no denying that it was his fair and square. 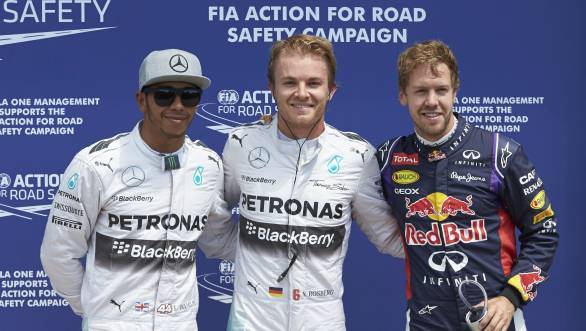 Throughout qualifying though, it was Rosberg's team-mate who had been the man at the top of the timing sheets. This after he even managed to lead FP3 rather comfortably. But when it was time for the final 15 minutes of qualifying, Nico managed to put his car ahead of the rest of the pack. He clinched pole position with a timing of 1min 14.874secs, staying ahead of Hamilton by a mere 0.079secs. This means that the battle between the Mercedes team-mates, one even encouraged by team boss Toto Wolff, is very likely to continue even at the Canadian GP. Of course, the battle is about so much more than just the win at this particular race, with Hammy and Rosberg having a tug of war in the championship title as well. And while Rosberg, with 122 points currently leads Hamilton by 4 points, Canada could well change the order at the head of the championship standings.

Starting third on the grid is Sebastian Vettel, the defending world champion just about edging out the two Williams cars who initially looked set to take third and fourth spots on the grid. Valtteri Bottas outqualified his more experienced team-mate Felipe Massa, with the duo lining up fourth and fifth on the grid, ahead of Red Bull Racing's Daniel Ricciardo.

Fernando Alonso who topped the first Free Practice session at Montreal lines up seventh on the grid, ahead of Jean-Eric Vergne in the Toro Rosso, Jenson Button in the first of the McLarens and Kimi Raikkonen in the second Ferrari. The Force Indias of Nico Hulkenberg and Sergio Perez line up eleventh and thirteenth on the grid, split by Kevin Magnussen in the second of the McLarens.