Audi has showcased a new 3.0-litre V6 TDI engine at the ongoing 35th International Vienna Motor Symposium. This new turbocharged diesel engine will be available in 221PS and 276PS states of tune. The engine is engineered to meet the stringent Euro 6 regulations and Audi says that it qualifies for the 'clean diesel' tag which means that this unit can run on ULSD (Ultra Low Sulphur Diesel) as well. 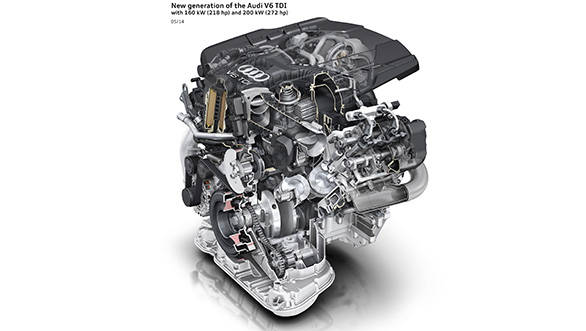 The 3.0-litre TDI engine Audi claims is more powerful than the earlier version. It is also 13 per cent more fuel efficient and reduces carbon emissions by an average of 15g/km. The engine is capable of generating peak torque of up to 600Nm and these figures will vary from model to model. The newest TDI engine has cylinders at a bank angle of 90 degrees and total displacement volume of 2,967cc. A host of new features have been incorporated to make this engine as fuel and thermally efficient as possible. The crankcase and cylinder heads now get separate coolant loops with an improved thermal management system. Power figures also see an increase due to the updation of the turbocharger and the variable load oil pump. The company claims that, Nitrogen Oxide (NOx) storage catalytic converter has been fitted with a diesel particulate filter and SCR (Selective Catalytic Reduction) injection for the first time in the automotive world.

The 3.0 TDI engine is quite popular in India and has been the source of power for almost all the diesel models of the German marquee found in the country. We expect the new engine to makes its way to India soon in the near future.