Tata Motors showcased a wide range of new vehicles at the Auto Expo, including passenger and commercial vehicles based on different fuel types, including hydrogen. However, one of the highlights of its stall was the Harrier EV. The automaker also unveiled the ICE version of the Curvv EV and Avinya EV concept.

The electric version of the Harrier is somewhat identical to the ICE model except for the blanked-off grille, redesigned front and rear lights, new bumpers, and light bars at the front and rear. The EV also gets air curtains on the bumper and a new set of dual-tone alloy wheels. Notably, it uses a Gen 2 electric vehicle platform. Although Tata did not disclose details about its battery pack and power outputs, it confirmed that the Harrier EV gets an all-wheel drive - a dual electric motor setup. The electric SUV may get a sizable battery pack (around 60-80kWh) and fast AC/DC charging capability.

The automaker is likely to launch the Harrier EV in India sometime later this year or early next year. It could also unveil the production-ready version before the launch. Meanwhile, Tata is also working on the Punch EV, which is expected to debut sometime this year. 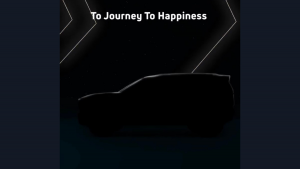