The fourth and final round of the 2018 JK Tyre National Racing Championship began today in full swing at the Buddh International Circuit in Greater Noida.

In the top Tier Euro JK 18 category, Nayan Chatterjee and Karthik Tharani won a single race each today. This will take the championship win down to the wire, tomorrow's race decides who wins this year's title. Ashwin Datta, who was leading the championship until this round, had a forgettable outing and was unable to mimic his earlier success in Coimbatore. 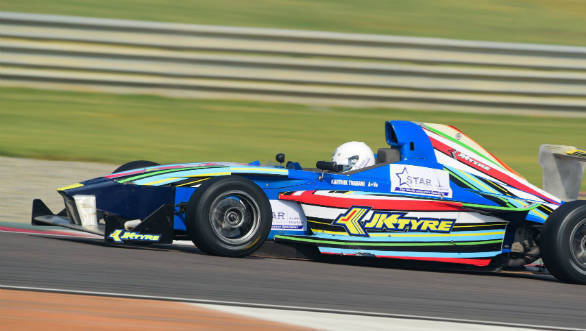 Tharani sarted off on a strong note, scoring the top spot on the podium on Friday. He converted this into a win in the first race today, closely followed by Chatterjee. The second race started in a reverse grid format, which meant Chatterjee and Tharani started in P5 and P6 respectively. But Chatterjee came out on top, finishing first, with Tharani following.

Ashwin Datta started in P5 in the first race and couldn't better that standing. He started in P2 in the second race but was overtaken by the other title contendors. As it now stands, Tharani leads the Euro JK 18 championship with 82 points, followed by Chatterjee at 81 and Datta at 79. Drivers are dealing with much higher speeds and have a more aero-focused set-up on their cars. 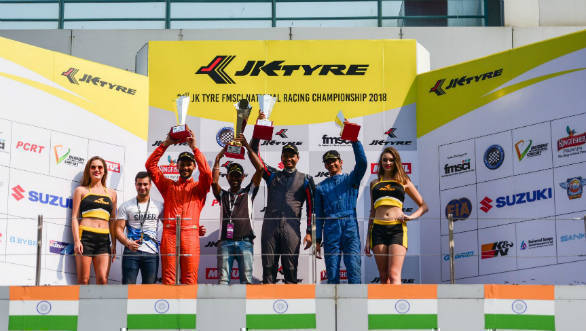 In the LGB Formula 4 category, the wheel to wheel racing that we saw in the last few rounds in Coimbatore continued here as well. The usual favourites were at the top here as well with Vishnu Prased winning the first race and finishing fourth in the next one. The other top contendor, Rohit Khanna missed out in the first race, finishing outside of the podium. He made some ground in Race 2, finishng second behind Diljith TS. pradas now has 76 points in the championship and is six points ahead of the rest of the field.

The Suzuki Gixxer Cup and the International Asia Cup of Road Race were held concurrently today. Joseph Mathew had a rare slip-up today, finishing outside of the podium. Vidhan Dubey won the race instead, following him were Anthony Lalawmpuia and Clinton Cordeiro. In the International Asia Cup of Road Race, India's Karthik Mateti wonnning the race Sri Lanka's Hansika Abeysinghe claimed the second place while Australia's Max Stauffer took the third.

Also, the JK Superbike Cup was also held today in both 1000cc and 600cc categories. The 1000cc race was won by Gurvinder Singh. Dilip Rogger and Deepak Ravi Kumar finished second and third. Vijay Singh finished first in the 600cc class. Kulwant Singha and  Kamran Dubash rounded off the podium