In a bit of an anticlimax at the final round of the 2018 JK Tyre National Racing Championship being held at the Buddh International Circuit, Karthik Tharani comfortably won the Euro JK 18 championship after closest competitor Nayan Chatterjee was unluckly rear-ended by Manav Sharma, two laps into the title deciding final race. The earlier race of the day, Race 3 had seen Chatterjee finish ahead of Tharani and set the stage for a close final race.

The last race also began in a reverse-grid, further adding to the action.  Chatterjee and Tharani started from sixth and fifth position, adding to the difficulty. The championship ended with Chatterjee in second place. Ashwin Datta, who had been leading the standing until before this round, finished third overall. 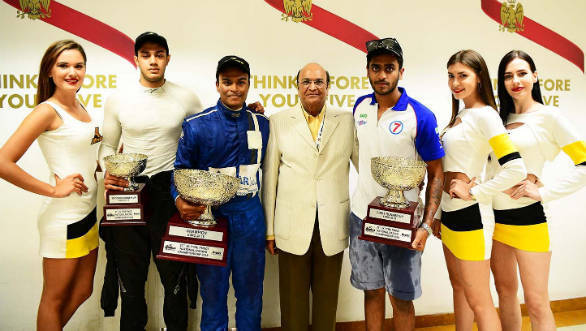 In the another upset of sorts, Raghul Rangasamy took top billing in the LGB Formula 4 class. Despite the extremly close racing this category saw through the course of the season, Vishnu Prasad had been leading the championship with six points entering into the final race today. Sadly, he fell behind midway through the race and lost the advantage. The race was won by Rohit Khanna, with Raghul Rangasamy and Sandeep Kumar following behind him. In the championship standing, after Rangasamy were Vishnu Prasad in second and Rohit Khanna in third.

Malsawmdwngliana won the last Suzuki Gixxer Cup race. Joseph Mathew bad run this weekend continued but the massive lead he had picked up in the Coimbatore rounds assured him of the championship win.  Malsawmdwngliana also finished first in the Asia Cup of Road Race, ahead of Australia's Max Stauffer and Sri Lanka's Hansika Abeysinghe.