Arjun Narendran from Coimbatore took home the title in the premier Indian Touring Cars class of the MRF MMSC FMSCI Indian National Racing Championship 2017 at the Madras Motor Race Track near Chennai on Sunday. Arjun finished the season in style with his fifth straight win in the fifth and final round of the championship. An overcast sky and rainfall the previous night only added to the drama in each race.

Sandeep Kumar from Chennai, meanwhile, won all three races of the weekend in the Formula 1600 (F1600) class taking his first-place tally of the season to six and earning second spot in the championship. Two of his wins came a day after Anindith Reddy had already been crowned National Champion in the class with a similar number of wins. The champion did not have a great weekend, though, unable to finish one race on Saturday and finishing second and third, respectively, in the two races on Sunday. However, that has no bearing on Anindith's shot at the Mazda Road to Indy shootout in the USA later this year. 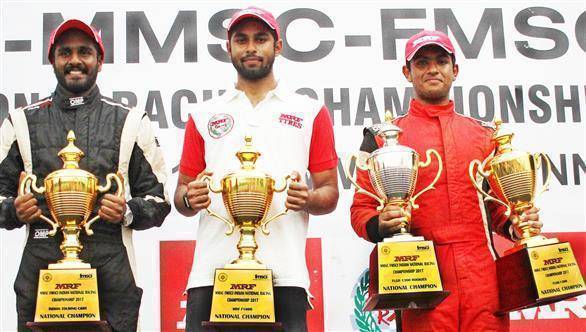 Kolkata youngster Arya Singh too had claimed the National and Rookie titles in the Formula LGB 1300 class on Saturday. Meanwhile, Karminder Pal Singh clinched the MMSC Volkswagen Ameo Cup 2017 Championship with ease as he raced hard to the last lap of the season finishing second behind guest driver Anning Sun of China in the season's last race on Sunday, and stood first in the Cup's first-ever wet conditions race earlier in the day.

Much of the focus today was on the Indian Touring Cars race with defending champion Arjun Narendran leading his closest rival Bengaluru's Deepak Paul Chinnappa (Race Concepts) by 12 points. As such, Narendran needed to finish third to claim the title, but he did much better by winning the race and thus defending his crown.
The race itself was a bit processional after Narendran eased past the front-row pair of B Vijayakumar and Vidya Prakash in the second lap. Once in front, Narendran barely turned a wheel wrong and won with teammate Ashish Ramaswamy finishing second ahead of Vidya Prakash.

Championship leader coming into the final weekend, Chinnappa started Sunday's race in seventh position, caught in traffic, had a spin and came in fourth, but still clocked the fastest lap of the race. He finished second in the championship behind Narendran. The champion expressed relief and joy at things falling into place in the second half of the season, which led to his back-to-back championships.

The names of champions in the Saloon car categories  Indian Junior Touring Cars, Super Stock and Esteem Cup  were being withheld pending post-race scrutiny at the time of reporting.