This was magic. Sebastien Ogier fought for two days to overcome the frequent handicap of running first car on the road in circumstances where conditions were often disadvantageous, eventually pulling into the lead on a thrilling final stage. On the first full day he was leading despite driving several stages with inoperative windscreen wipers, which resulted in an incident when an unsecured bonnet smashed the windscreen, but then went into a snow bank and dropped to fourth. This gave Andreas Mikkelsen the chance to lead for over a day, which he held until he spun on the final stage and it allowed Ogier and Thierry Neville to get pass. It was an extraordinary event in which virtually all the top runners spent some time off the road with snowbanks. There were surprises all the way, right from the opening superspecial in which the Fiesta RRC car of local driver Pontus Tidemand won outright! The conditions kept changing, no fewer than eight drivers scored fastest times during the event and four different drivers took turns in the lead. The big shock of the rally was an apparent suicide pact attempt by Jari-Matti Latvala and his teammate Ogier on stage 9, the final orthodox stage on the Friday, when both VW drivers went off the road, leaving their colleague Mikkelsen a very surprised leader. 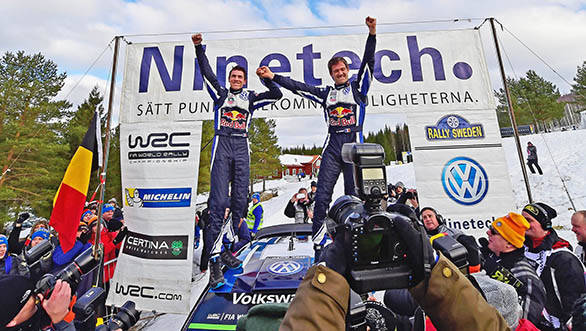 Conditions were visually memorable, with snow across the road with very little gravel penetrating the surfaces, and scenically idyllic. Temperatures hovered around zero degrees, dipping at night to solidify the ground. Their championship domination at Monte Carlo meant that Volkswagen started running 1-2-3 on the road, which was a mighty big gamble, which could work either way. Following them off the start line on Friday morning came Mads Ostberg (Citroen), Thierry Neuville (Hyundai) and Elfyn Evans (Ford) but by the third stage the Volkswagens were lying 1-2-3 in the overall classification and the die was cast but already Ogier was in trouble. The windscreen wipers had failed and then on stage nine there was pandemonium. Neuville made fastest time, Ogier was now fourth, Latvala had fallen to 23rd overall. This was the break which Neuville had been hoping for and through Saturday he was engaged in a fight for second place with Ogier while Ostberg was challenging for fourth place, before Ostberg punctured first thing on Saturday and took up a lonely position out of touch of Ogier but well in front of Tanak. The final stage on Saturday, Neuville made a major blitz, with the advantage of carrying two spare wheels, enabling him to have better grip. He was able to pass Mikkelsen, and overnight he was in the lead. First thing Sunday Neuville had intercom trouble, dropping some seconds, enough to let Mikkelsen back into the lead, but now free of the front-running problems, Ogier attacked hard as the rally came to the final stage, only 4.6 seconds separated the top three drivers and on the Power Stage Mikkelsen stopped in a snowbank, needing spectators to get him going again, while Neuville "was at Maximum" but could not resist Ogier. 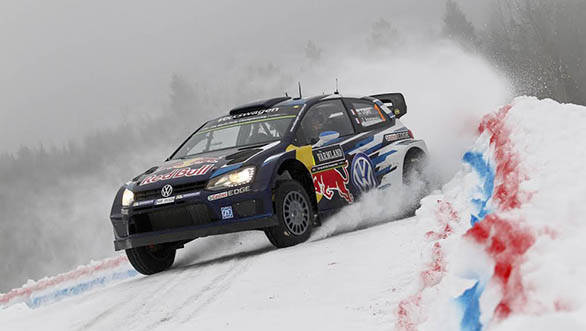 Hyundai with their old 2014 specification cars went to Sweden in dismay when Sordo had to withdraw after an injury in training, so that Hayden Paddon had his first drive in the main team (on only his second snow rally) and Kevin Abbring was invited to drive their third entry, on his first event in a World Rally Car. They all did well finishing second, fifth (Paddon) and 11th Abbring. Citroen went in high hopes with their two 2015 specification cars but both their drivers went off the road. Ostberg lost five minutes on the final morning, while Meeke lost over two minutes on the Friday. M-Sport still had their 2014 specification cars and Ott Tanak settled down to a stead rally to finish fourth, while Evans finished sixth after losing a couple of minutes off the road on the Friday. There was a superb run by privateer Martin Prokop, lying sixth until the final morning, but Robert Kubica had most of the problems, like Lorenzo Bertelli and Prokop and Henning Solberg all had transmission troubles of one form or another.

This rally was a great occasion for the country, and the sport, but a disaster for the Swedish competitors. No Swedish driver was seen at the wheel of a World Rally Car, the top placed Swede at the finish was Pontus Tidemand, in 17th place, and that was only after spending five minutes in a snowbank on the Friday afternoon. For a once great rallying nation, the Swedish Rally once again demonstrated that the Scandinavian power on the stages has now shifted westwards into Norway. 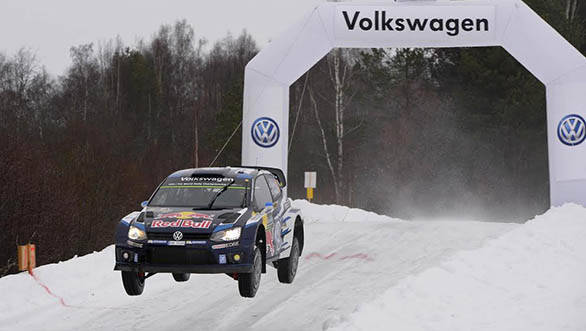 DMack launched their attack on the 2015 WRC2 title confidently. Jari Ketomaa led the category from first thing Friday morning, through to the end of the rally, while four drivers battled for second place. These were Anders Grondal, whose Citroen R5 was delayed by turbo problems, Pontus Tidemand who had spectacularly led the rally overall on the Thursday evening superspecial, but who went off the road on Friday afternoon, Mini RRC driver Valeriy Gorban and Ketomaa's teammate Eyvind Brynildsen in a Fiesta RRC. Brynildsen was making a one-off event appearance in the DMack team, but settled into second place when Gorban went off the road on Saturday baulking Fredrik Ahlin. Surprisingly all fourteen starters in the category (including four drivers eligible for the Production Car Cup) completed the route and only one driver, the reigning Production Car Champion (Max Rendina's Mitsubishi) missed any stages during the event. Romanian resident driver Simone Tempestini was the best placed of the Production Car finishers.

Also competing on the event was WRC2 series leader at Monte Carlo Stephane Lefebvre but who on this occasion was not registered for points. He continued until the final morning when he touched a rock and went off the road and retired. Only one competitor entered the WRC3 category, this was Ole Christian Veiby (Citroen DS3 R3T) who duly completed the route and who gained maximum FIA championship points taking the lead in the series. Veiby was the top placed two-wheel-drive finisher but was less than a minute ahead of the RC4 class winning in an Opel Adam R2 of Emil Berkqvist.

In the championship stakes although Volkswagen won the event it was the Hyundai team that scored the most points, 28 against 25. In the Drivers' championship the surprise is that not that after two victories Ogier is ahead but that in joint second place are Andreas Mikkelsen and Thierry Neuville. In WRC2 with only points scorer in Monte Carlo not being registered in Sweden (Lefebvre) totals were not increased with Ketomaa now joint leader with Lefebvre. With the changes in the Teams' Cup championship for 2015, the DMack team only score points for Ketomaa's victory with points for second place going to the Eurolamp team of Gorban. In WRC3 Ole Christian Veiby's category win sees him take the lead in the category.