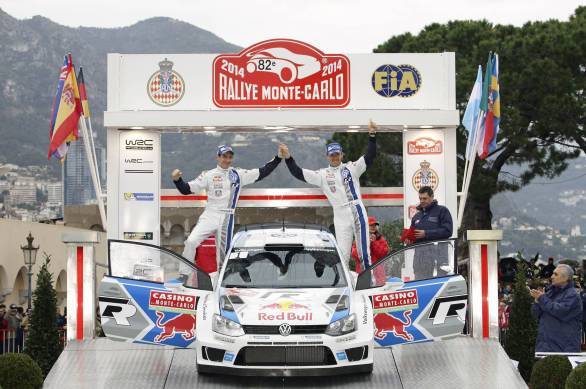 For the second year running, an already dramatic Rallye Automobile Monte-Carlo came to an incredible conclusion as horrendous rain and snow storms descended on the mountains behind the Principality. This time his first victory at Monte Carlo went to the VW driver reigning world champion Sebastien Ogier who had spent the first half of the event recovering after a tyre choice error, ironically on stages close to his home in Gap. Robert Kubica took full advantage of favourable running order conditions to lead initially in his Fiesta WRC before crashing one day later, the private Fiesta driver Bryan Bouffier took over the lead and eventually finished second, ahead of the Citroen driver Kris Meeke. On the 50th anniversary of Paddy Hopkirk's Monte win in a Mini, fellow Ulsterman Meeke gained the first podium WRC result for a British driver in over a decade. The impressive new Hyundai WRC team retired early but not before Dani Sordo showed a promising glimpse of the i20 car's pace. 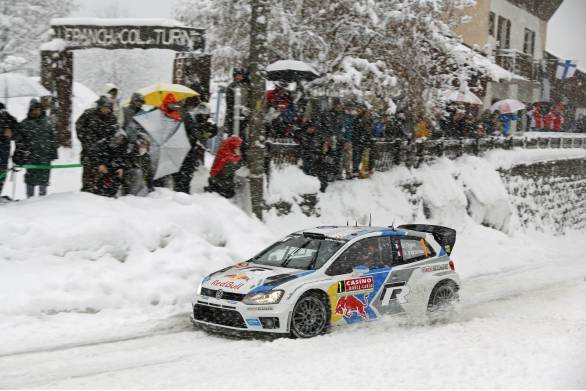 The Polo WRC in action with eventual winner of the Rally Monte Carlo, Ogier, at the wheel

The vagaries of the weather struck immediately. Long after pre-dawn ice-note crews had checked the first stage heavy snow fell unexpectedly. On the first bend Ogier glanced a wall as did Bouffier then Hyundai's team leader Thierry Neuville crashed down the road. As daylight arrived and the snow soon disappeared, latter drivers including Kubica and Bouffier benefited. Snow on the third stage over the notorious Col de Perty also caught out drivers including Ogier, Kubica, Ostberg and Latvala who were not carrying any emergency winter tyres. All this brought Bouffier into the lead ahead of Meeke, Sordo and Kubica. Ogier was lying ninth! For the next two days the snow was sparce, icy patches were infrequent but running water on the stages was almost everywhere. Sordo's run ended with an electrical failure on the road section leading to stage five. On the final stage of Day 1 an uncomfortable Kubica eased his pace allowing Meeke to move up to second behind Bouffier. 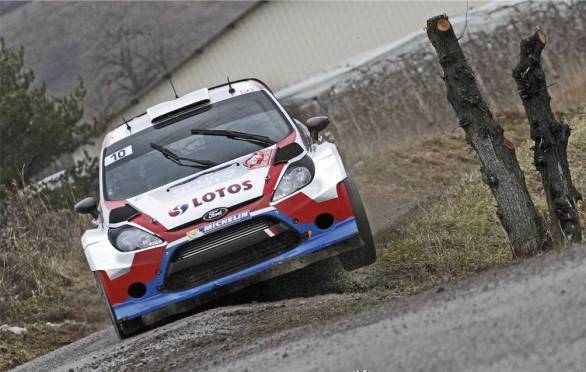 After a snow-free clear weather pre-event recce, the sudden change in weather conditions continued to confuse competitors but Ogier was soon up to second, albeit more than a half minute behind Bouffier. On stage nine both Bouffier and Ogier made more errors. The rally leader spun and slid off the road, needing spectator help to regain the road, losing a minute and the lead. Ogier slid violently into a ditch, from which he was lucky to drive away with nothing more than a broken wheel rim but he was now in the lead which he kept to the finish. Kubica however was off the road after impacting a bridge and then going backwards off the road. He was out of the event as competitors are not allowed this time to restart after retiring. Citroen's new team drivers Kris Meeke and Mads Ostberg (on only his second Monte) were lying third and fourth and eyes were now on the efforts of Jari-Matti Latvala fast recovering after his tyre choice errors, not helped when he clipped a curb on stage nine and punctured. Latvala overtook the Ford driver Mikko Hirvonen, who was struggling in the conditions and then overtook Hirvonen's teammate Elfyn Evans in the dark of the final stage of Day 2 going up into fifth place. Bouffier meanwhile was in trouble with his pacenotes here and he lost a half minute to Ogier, which cemented Ogier's command of the event. 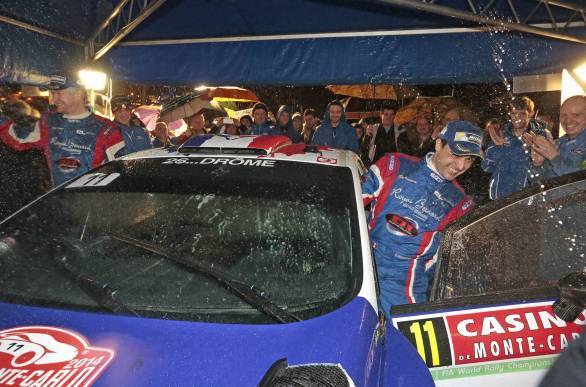 Privateer Bryan Bouffier, the first British driver on a WRC podium in over a decade

The final leg's competition comprised two runs over the tortuous Col de Turini and the faster and lower level stage near Sospel. A dramatic sense of expectation were heightened as heavy rain falling on the Principality indicated the assurance of fresh heavy snow falling at the top of Turini. First time through gave Hirvonen the chance to get up to sixth place by overtaking his teammate Evans, who was ordered to be ultra-conservative in his driving and tyre choices on his first ever Monte. The weather was getting worse and on the climb to the summit on the second pass over Turini, this time at night, the road was blocked by the first running competitor, the Fiesta WRC of Jaroslav Melicharek and the stage was abandoned. This left just the Sospel stage to rerun. The rain and the cascades of water simply intensified, but Latvala rose to the challenge of the Power Stage and made best time and gained his additional championship points. Hirvonen however stopped in the stage with a flat battery after a repeat of the alternator failure that had earlier side-lined another Fiesta driver, Martin Prokop. 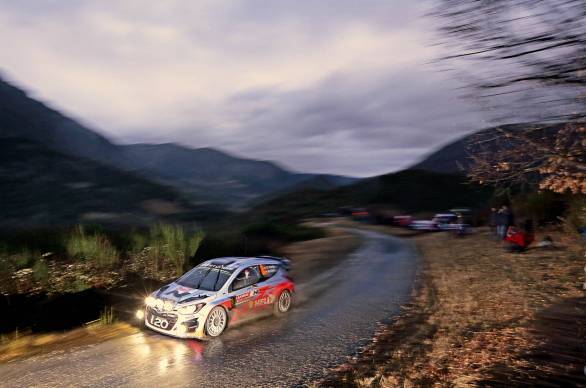 Dani Sordo might not have finished the rally, but managed to prove that the WRC i20 had the pace needed

The Monte had lived up to its traditions, so much was going on behind the scenes. The arrival of Hankook and Pirelli tyres into the championship produced a remarkable ninth overall placing for Matteo Gamba's Hankook-shod Peugeot 207 S2000, the top non-world rally car finisher, strong positions for Pirelli driver Lorenzo Bertelli and for DMack user Robert Barrable. Three makes of car were on the podium, French fans were happy with the French driver 1-2, British fans were happy they had two drivers in the top six, Norwegians had two in the top seven, there was something of interest and excitement for everyone. A memorable occasion, well up to expectations for the oldest rally in the world. 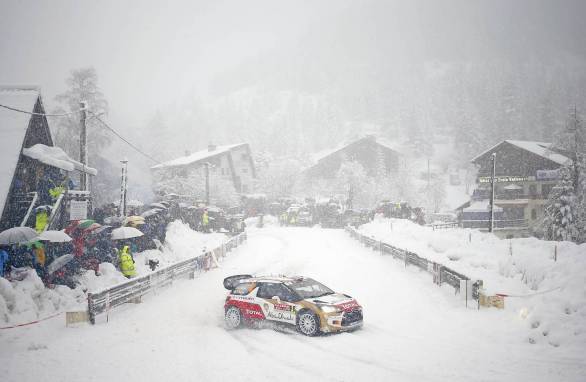 It may have been a little disappointing for French fans that both Citroen and Peugeot delayed the introduction of their R5 models and were not present at Monte Carlo and that French national champion Julien Maurin crashed on the first stage in his Fiesta RRC. This left Fiesta R5s to take the top four places in the WRC2 category, headed by Yuriy Protasov. Lorenzo Bertelli initially led but Protasov pulled clear and led all the way except after the first stage on Day 2 when he punctured letting Armin Kremer ahead, before the German then punctured and the Ukraine driver resumed his control. Bertelli dropped back to fourth with transmission troubles, Kremer had brake problems which allowed Robert Barrable up to second before he in turn had desperate windscreen misting problems in the rain on the final night, so the order ended as Protasov, Bertelli, Barrable and Kremer. Top non-Fiesta was Massimiliano Rendina's Mitsubishi and finally Jourdan Serderidis's Fiesta. Maurin was the only non-finisher in the category.

WRC3 was the weird one, with only one contender, Quentin Gilbert in his Citroen DS3 R3T. He damaged his suspension going off the road on the opening stage and lost considerable time, finishing the rally one place off last  but with maximum points! The Junior WRC category does not start until Portugal, but a very significant entry was by reigning WRC3 champion Sebastien Chardonnet making the debut appearance of the Citroen Max version of the DS3 R3T, who in the topsy-turvy opening stages was lying fourth overall after the first stage. He was the top placed two-wheel-drive competitor, finishing 11th overall, winning the lucrative two-wheel drive Promotion category for non priority drivers. Winner of the Promotion category of four-wheel-drive cars was Matteo Gamba. Another, very welcome, sight was the wide-tyred Porsche of Marc Duez, the first sportscar seen on a WRC event for two decades. Duez struggled in most unsuitable conditions and with many technical problems, but made several times in the top twenty places before withdrawing before the final loop. Renault Twingos took victory in RC4, with Franck Sias in an R2B, and RC5, Nicolas Renchet in an R1B. 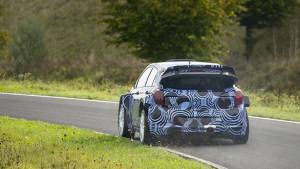