With the Daytona gone, Triumph was left with no motorcycle that could show off its prowess on the racetrack. The mantle then had to be picked up by the Street Triple RS - but in doing so, it seems to have lost that friendly character that makes the Street Triple so likeable for many riders out there. In comparison, the Street Triple S came across to be a bit too friendly and in the company of motorcycles like the 790 Duke, a bit too docile as well. With the recent midlife makeover that was given to the Street Triple line, Triumph India addressed this concern and this time around they decided to bring in the Street Triple R in place of the S and that might be just the right move for them and us riders. Design
The Street Triple R benefits from most of the cosmetic changes we saw with the new RS, meaning it gets the controversial, angry headlights. These offer superb illumination and during our tests and shoots, it managed to cut extremely well through the fog even. The R also wears the revised crown, a redesigned tail section and a reprofiled exhaust canister thanks to the new BSVI hardware. It loses out on the belly cowl of the RS, though. 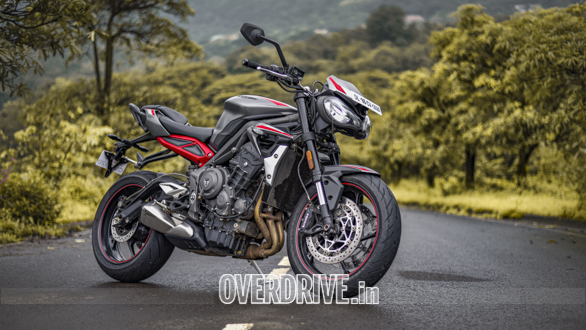 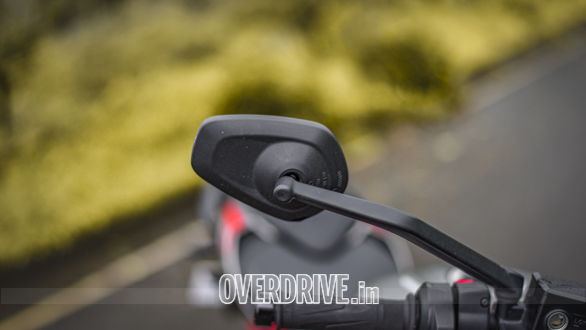 Unlike the RS, it mounts its mirrors on a more conventional position on the handlebars and not on the bar ends, and I believe that gives the R a little bit more leeway when lane-splitting through traffic or filtering through jams. The matte grey and red paint scheme are very much like the outgoing RS, superbly finished in typical Triumph fashion and complemented well by the high-quality fit and finish of all the parts and peripherals. In my opinion, the R looks a tad bit sportier with its red subframe which looks like it came straight out the track-bred Daytona 675 R. The Street Triple R is made for the street though. 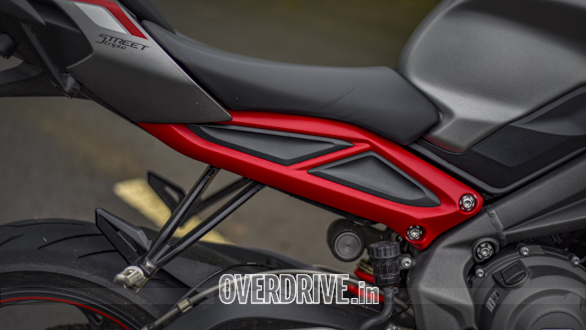 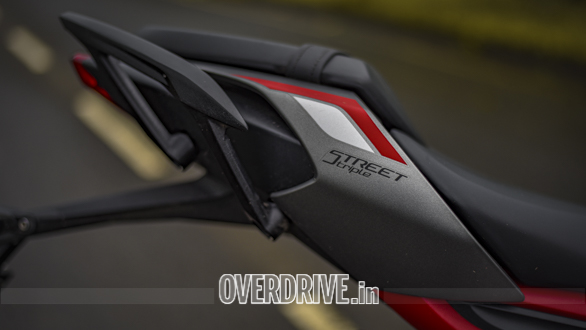 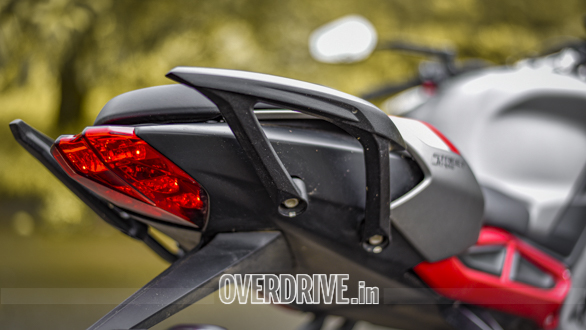 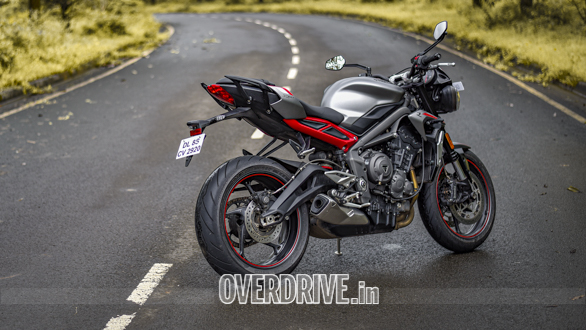 Chassis and ergonomics
To that effect, it has marginal differences to its rake and trail over the RS, which aim to make it slightly more agile and easier to manoeuvre than the RS during city use. Honestly, the difference is hard to notice. What you might notice though is the marginal 2kg increment in the R's weight over the RS, but at 168kg, the Street Triple is generally light and very easy to manoeuvre. Triumph only sells the standard seat variant of the Street Triple in India and its 825mm ride height will make you feel right in your comfort zone if you are 5'6" and up. 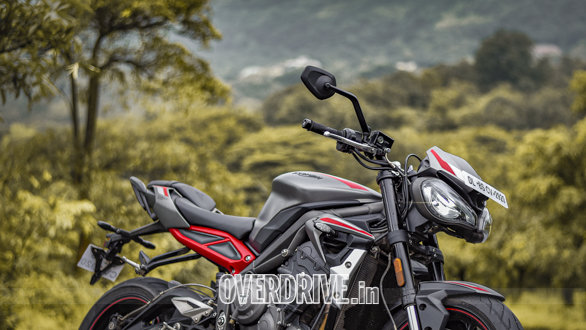 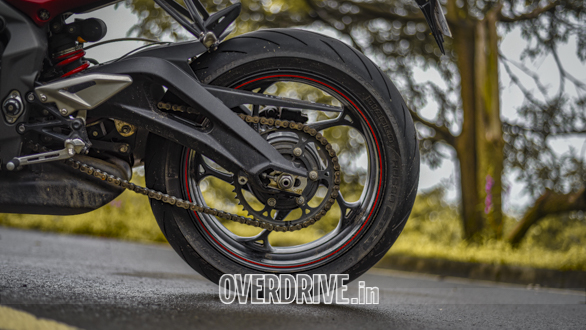 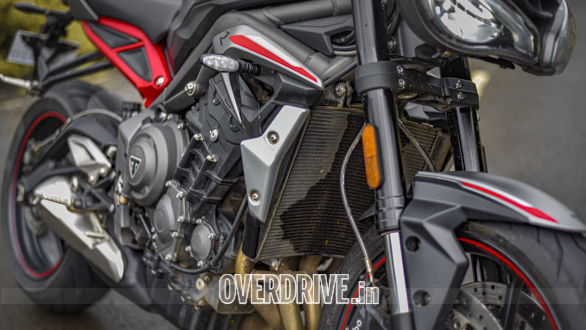 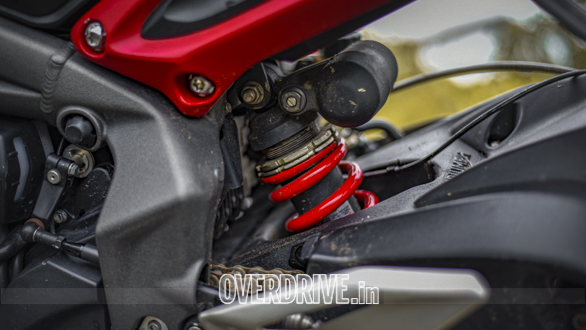 The handlebars are nice and wide for city use, and around winding roads, they offer enough room to move around and get a comfortable yet aggressive riding posture through the corners. The Daytona derived tank helps further to get a good grip on the bike through the corners, while on the road its size and shape feel comfortable for day-long riding. The seats too complement to that effect with their moderately firm cushioning and wide design. 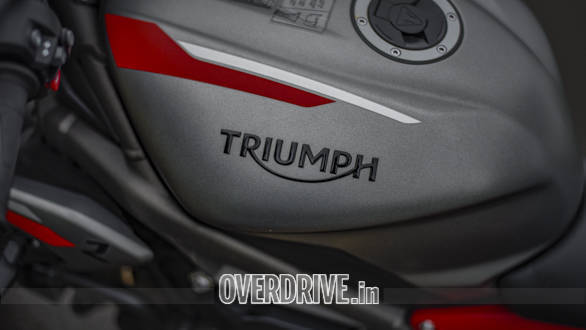 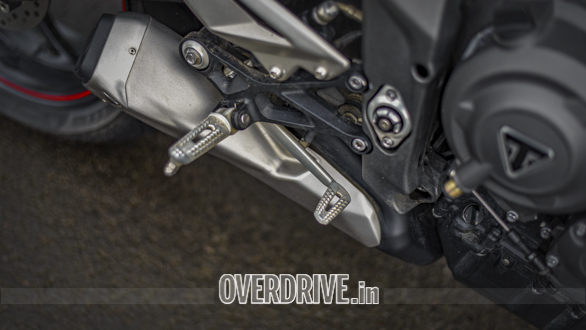 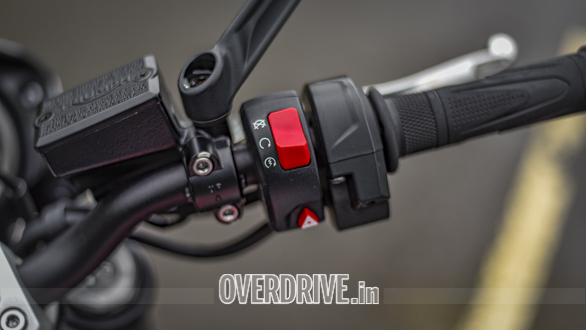 Features and usability
The console on the R is very much like the outgoing Street Triple S, incorporating an LCD screen mated to an analogue tachometer. I quite like how the rev-limiter lights up in your peripheral vision and how easy it is to read the revs compared to the RS' TFT screen. I'll nitpick on the clutch cable which passes over the console, making it hard to glance at some of the tell-tale lights while riding. There is an additional riding mode to choose from on the R - the Sport mode - but since there is no TFT screen full of menus like the RS, the R gets the old-school switchgear sans any joysticks and has a simple push-button instead for cycling through the riding modes (which by the way can be changed on the fly by pulling in the clutch). 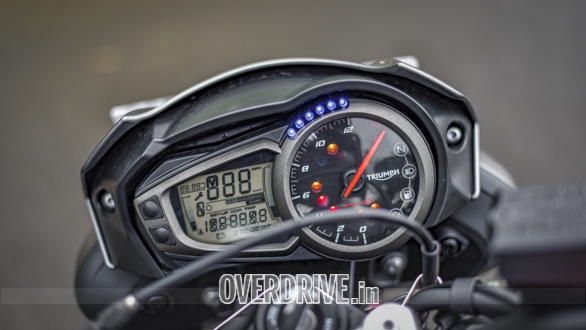 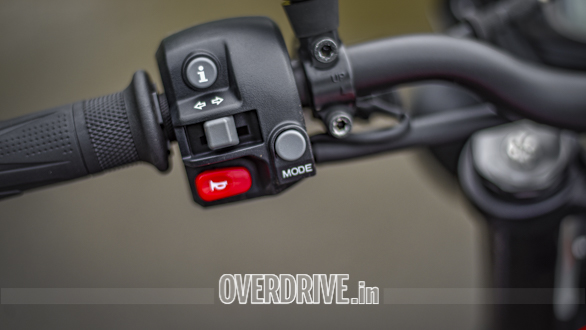 Performance and handling
The Daytona derived 765cc engine has been the big talking point of the new Street Triple since 2017, and the R will leave you grinning wide too. It is 6PS more powerful than S or 5PS lesser than the RS - whatever makes you happy. From where I sitting, I like the fact that it is not even a blink of an eye slower than the RS in its outright acceleration - hitting the standing ton in 3.65s in our tests - that's less than half a second slower than the RS or half a second quicker than the 790 Duke - whatever makes you happy! 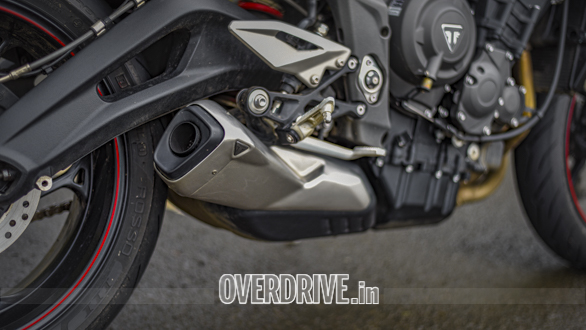 The Euro-V/BSVI models also receive a bit of reworking inside the engine which has reduced the inertial losses. The engine still doesn't feel as creamy-smooth as the Z900's, nor is it as responsive to small bouts of throttle twists as the Duke is - but the numbers don't lie and they clearly tell a more glorious story of this 765. It has a cleaner power delivery than the Duke and a much smoother performance from its bi-directional quick shifter too. The meat of the powerband for this engine lies between 6,000-10,000rpm and while the short gearing works well in the city and on the highway, around tight switchbacks though, you could often find yourself in the wrong gear and battling a choppy throttle. It is a matter of getting used to. 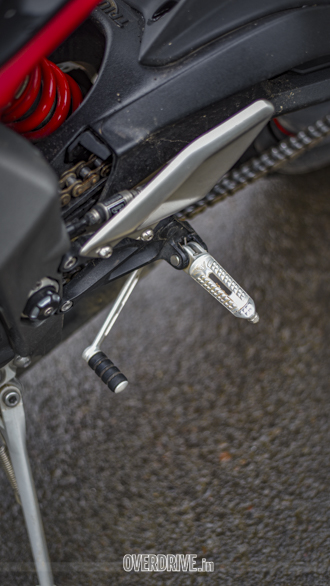 The traction control system is alert throughout (sometimes, a little too much) and reminds you that this bike was conceived in the funny Brit weather. Speaking of which, the Rain mode mellows the throttle response, while the Sport mode makes a noticeable difference to the way power is delivered. If my memory of the Street Triple S serves me right, the new R sounds even nicer, whether you are ambling around in town or putting its 118 horses to work around the faster roads. Even at idling engine speed, the exhaust note is a bit more growly. Perfect for traffic lights or attracting the ire of stray dogs - whatever makes you happy! The powertrain also has a peculiar intake howl and people will notice you coming. It is the kind of sound that might just make you forget how sharp a handler the 790 Duke is/was and make your heart melt in the Street Triple's favour. It is loud enough for me to not think about the Arrow upgrade, though it promises marginal performance improvements that I don't really care much about. The Street Triple R is pretty explosive out of the box and it's sharper handling compared to the S makes it more capable than I would ever push on the road. 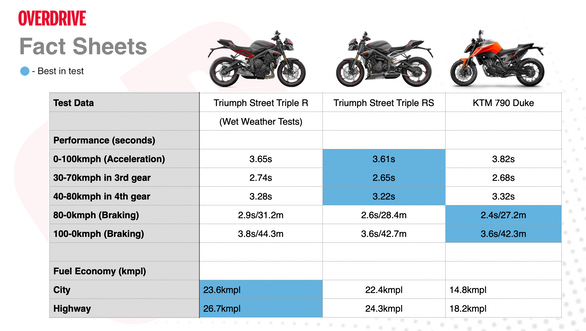 The twin-spar chassis is suspended by 41mm USD Showa Separate Function Big Piston Forks (SFF-BP) which are individually responsible for preload and damping. Tuning them to your liking would need more tools than a screwdriver though since reaching the adjusters is practically impossible with the handlebar in the place. Unlike the Showa Separate Function Forks on the Kawasaki Versys, which feature a pressure separation damper on one fork tube and a spring mechanism on the other, the SFF-BP has springs in both. That jargon essentially translates to better adjustability, optimal mass distribution, tighter body control and suppler ride comfort than even Kawasaki's adventure tourer. 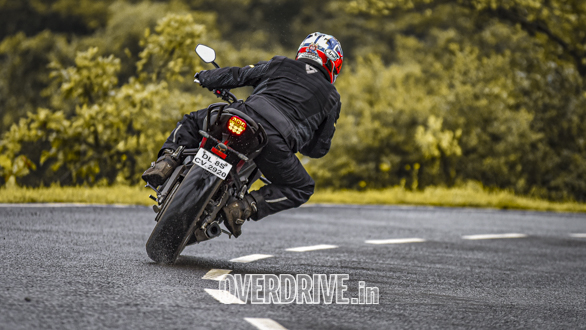 The Versys has 40mm longer suspension travel though, typical on an adventure tourer. Therefore on the R, you would have to slow down even more for potholes and exercise the kind of caution you would with sportbikes, to save those lightweight alloys and their precious hand-painted pin-striping. The R tackles expansion joints and road imperfections in a noticeably better manner than the RS and the ride doesn't feel as firm. 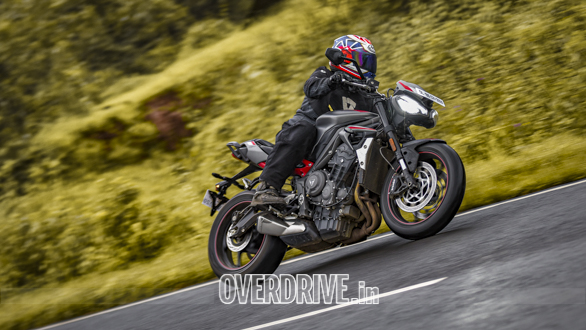 Riding the Street Triple with your thighs firmly gripping the tank makes for far better body control and shaper direction changes. Let it loose and its lightweight often makes the motorcycle stray from its line especially when powering out. Dropping the anchor for the harsher stuff on the road is phenomenally better on the R compared to the S. The rear brakes come from the RS, while the M4.32 4-piston radial monobloc callipers up front are one of the best that Brembo offers for road use. They sit below the more sport-oriented equipment like the Brembo M50s on the RS or the Stylema on new-age track machines (and even Triumph's own Tiger 900), but the advantage of these is a slightly softer and more progressive feel than the bitey M50s which can sometimes be too sharp for road use. Compared to the Nissin brakes on the outgoing S, the R's brakes have lesser fade and are more confident for late or trail braking. 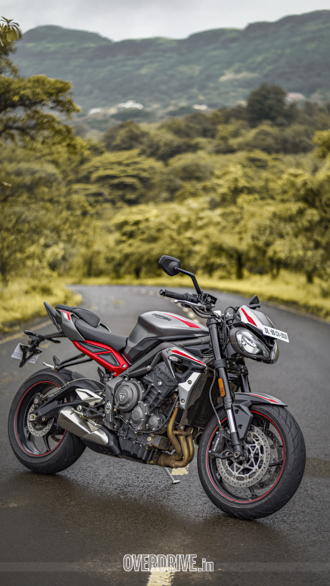 Verdict
In fact, save for the TFT and a Track mode, all of the Street Triple R's equipment is only a shade lesser than the RS and it shows in the test figures and how cracking its performance is out in the real world. But more importantly, its equipment choices ensure that it is just as friendly to live with as you would expect of a Street Triple. That makes it the perfect upgrade from someone moving up from the quarter-litre class while being sprightly enough to be the ideal street bike for the experienced rider to commute on. Furthermore, at Rs 8.84 lakh ex-showroom Mumbai, it is more economical than the S that it replaces. So while the price gap between the 'entry spec' Street Triple and the RS has widened for the better, the performance gap is a lot slimmer now - and that, I think, makes it all the street bike you would ever need.