Used to be that the big sportsbikes invoked fear and awe. You didn't take them lightly and they didn't let you get away with it either. They would hurt you. Kill your wrists. Make forearms ache from clutch effort. Seat you so high you'd barely get the feet down. And paddling gingerly around u-turns was the norm. They only flattered the skilled and brave. They turned everyone else into quivering lumps made half of apprehension and half of undiluted awe. 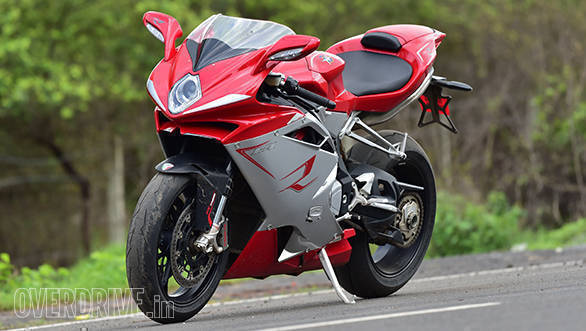 The MV Agusta F4R is still very much like that. The seat height is tall and even for a 6' rider only the toes go down easily. The clip-ons are high when you compare them to a current day sportsbike. But to the rider they are low and pulled back which folds you in half into a compact racing crouch when you're on the pace. Trundling around on the F4 is a matter of pain management between the low bars and the back and aggressively rearset pegs. Further aggravation for low speed use comes from a heavy clutch that feels like a forearm exercise machine. Many, many slipper clutch equipped engines have found ways to reduce clutch effort but the F4R is an headstrong exception. 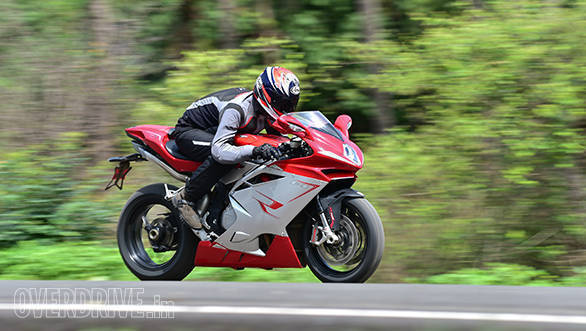 But you can look past all this. The F4R's inline four is one of the narrowest of its kind and the F4 is shockingly skinny for a four. Hell I think the Panigale 959  whose sleek waist I really liked - is as wide as this, which if you think about it, is insane. The narrowness gives you a connection to the motorcycle that I came to appreciate as the miles accumulated. 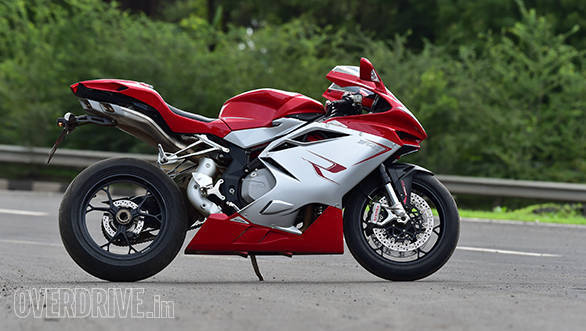 The engine has another rather well developed feature - performance. It starts up with a rasp and that slightly aggravated tone is a signature of the F4R. The smooth hum of the four cylinder engine is replaced by a deeper, angrier tone that suits the bike rather well. It's not all show no go either. The Agusta produces ferocious torque right from the bottom and it pulls hard whenever you gas it. The gearing allows you to smoothly hold slowish speeds like 40-50 in top gear but it smoothed out between 100 and 130 which is excellent for highway work. The F4R is not above lofting a front wheel up into the air if you whack the gas open but the ferocity of the performance will rock you back on your heels. 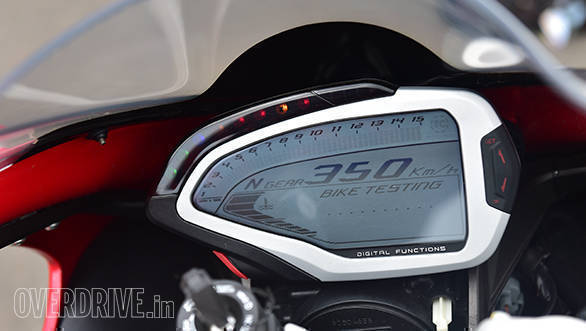 And though the F4R has a well known  weak spot when it switches the intake configuration at 10,000rpm, beware. It's the literal lull before the storm. The F4R charges to its redline with breathtaking savagery. Holy cow. Need to change my pants. Hold on.

Where were we? Oh yeah. I found the Sport mode a bit too instant for street riding and settled into the calmer but still very direct Normal mode for most of the riding. The F4R also has a milder rain mode and a custom mode which you can setup to do whatever you like. 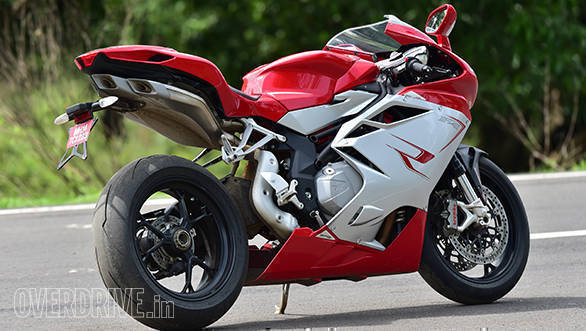 The trellis frame and the single sided swing arm are a good combination. The ride quality is decidedly firm and the MV will rattle grumpily through bad bumps. Undulations and small bumps are transmitted faithfully to the rider as well. But this isn't unexpected - the F4R isn't a road bike in this sense. However adjustable suspension means you should be able to back off compression and rebound to find a more supple setting for road riding. 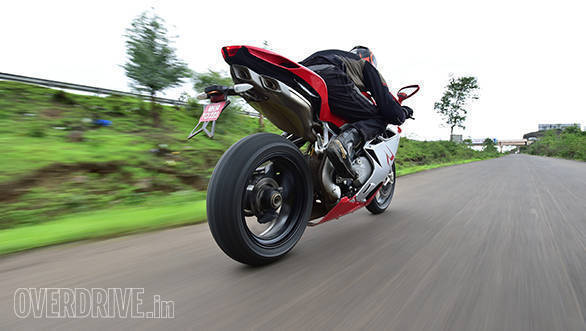 But the flip side of a stiff setup is razor sharp, unhesitant response to steering inputs. The MV Agusta turns rapidly and changes direction like an eel juiced up on caffeine. The tyres offer tremendous grip even in the difficult, changing conditions we had and your sense of traction is very strong. The quick reactions and immense grip quickly underline that sense of a race bike with headlights that all but oozes from the MV. What the F4R doesn't like  directly related to the stiff setup  are mid-corner bumps. The MV will thump through small ones and larger bumps are best avoided.

Dynamically, whether it is the engine or the handling, the MV Agusta F4R is an involving motorcycle that thrills you with precision and an implacable purpose-oriented focus. However it's got niggles and unfortunately the hallowed brand it comes from eggs you on to expect perfection. To run quickly through them, the little dash feels dated in resolution and the settings menus on the MV need an elaborate manual to use. The left side Set/arrows/OK switch rates as the most irritating switch I've ever used in its icky, hollow rubbery feel.

I also find the new square tipped quad exhaust a bit, erm, non-compliant. From the right side you see that the pipes don't align with the bodywork and hardware and on a motorcycle this meticulously executed, the gaps stand out. The size and girth of the exhaust is bewildering. It made me wonder if the iconic nature and identifiability of Tamburini's original forced a more rational, perhaps less distinctive design from being employed.

The current generation of the MV Agusta F4 dates back to 2013. That explains that hardcore, explosive feel of this rapidly powerful motorcycle. It's an superbly involving ride too - you're never ever going to be able to relax on this highly strung beauty. But it's also going to be hard work, mind you. The riding position, heavy clutch and the insane amounts of engine heat are going to be a challenge. But I hear you. How dare I nitpick, eh? That part is true. The F4R will be purchased by the well-heeled and it will be used to show off more than to use its firebrand performance. The F4R is priced at Rs 29.09 lakh ex-Pune and it is the middle model - strangely enough, this model no longer appears on MV Agusta's website. The F4, that's the lowest priced version, is priced at at Rs 26.87 lakh ex-Pune. The vastly more equipped and exotic F4RR is also on sale for a stunning Rs 35.71 lakh. 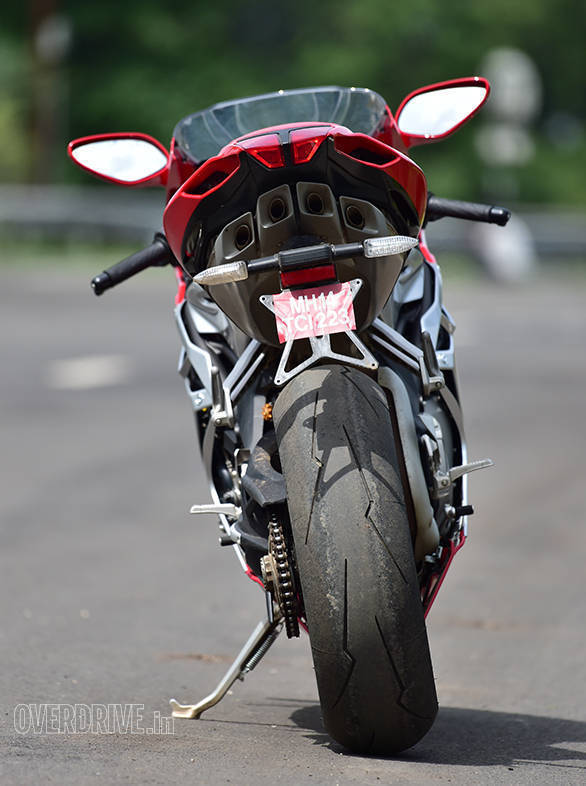 The MV Agusta brand has a special place in motorcycle history and while this F4R's direct link to MV lore is tenuous, Tamburinis lines still speak eloquently and people do notice the simple surfaces that draw a very beautiful silhouette. In that context, as an expensive ornament that declares your love for motorcycles, the MV F4 is the ultimate statement. Personally I've never understood motorcycles as anything other than machines meant to be ridden, dirtied, broken, fixed and ridden some more. The MV Agusta makes its dramatically different point as object d'art very eloquently indeed.