I can't confirm this with figures, but after sniffing around and hearing people in the know, I have come to believe that the Toyota Innova is now a thorn in the arm of the luxury compacts (just the way it has made life difficult for some of the more able SUVs). In its stylish Crysta avatar, the Innova has broken away from the people-carrier stereotype, and its high degree of practicality is now being considered as a more convincing alternative to the small cars from the luxury brands. 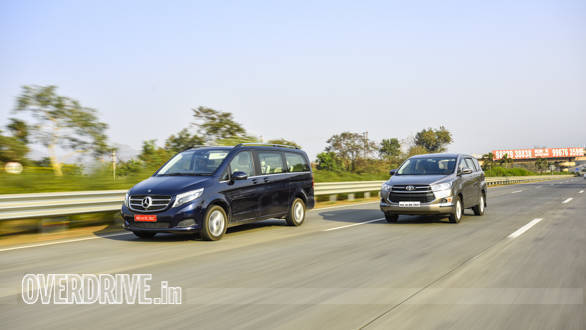 It sounds surprising, but call your acquaintances at a luxury car showroom and they will agree that the entry-level luxury cars are losing more prospective customers to this able people-hauler, instead of some swankier alternative from their conventional competitors. The success of the Innova Crysta, even outside of the fleet segment, is proof that the number of practical-minded consumers is rising, and is, in turn, is opening the doors for MPVs that are more luxurious and higher in spec. So much so that Kia is convinced that it's the second car for India needs to be a well-appointed MPV, and Mercedes-Benz, who is literally offering a luxury car in every segment possible (including a pick-up!), has convinced its dealers in India to add a van in their glitzy line-up. 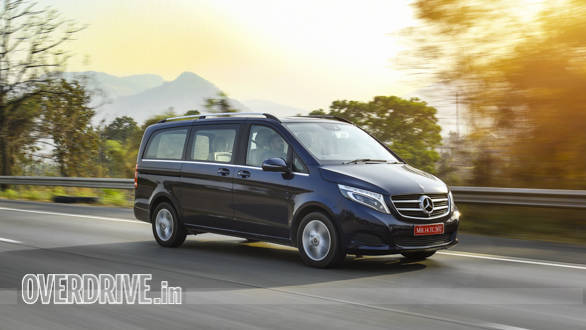 Design
Yes, a van - complete with a tailgate the size of a garage shutter, sliding doors that are larger than the entrance of a speakeasy, the slab sides of a conventional people-carrier and a blunt nose that marks its no-nonsense intent. It's even simply called, the V-Class or Van-Class, and its launch could be an excellent business decision by the carmaker. At first, many find it surprising to see a three-pointed star on a van, but in reality, Mercedes-Benz isn't alien to the concept of building utility vehicles. It has a history of building reliable commercial vehicles and what's astonishing is the carmaker's ability to marry luxury elements to that practicality. And then, who can forget the versatile R-Class (though Mercedes-Benz themselves might want to). 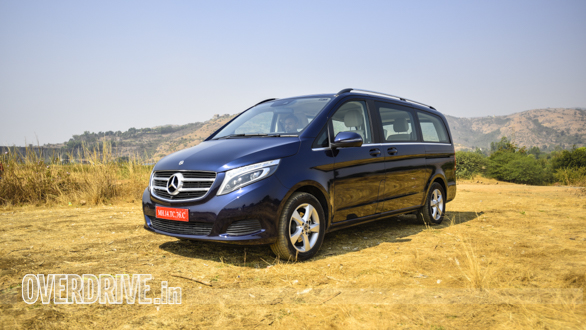 The V-Class will have an easier time than the R-Class though - because it looks conventional, has neutral styling and yet, it is sophisticated enough to come across as a luxury offering. It could well be just the second car for the family that many buyers in the luxury segment have been longing for. It is bit of a bummer that by the time you read this review, a refreshed V-Class would have already gone on sale globally and compared to the car you see here, it has a bit more dapper appearance. The changes may not make you feel shortchanged, though. The V-Class that has arrived here looks quite graceful in a very mother-of-the-B-Class way and will blend in well alongside an S-Class or a CLS. 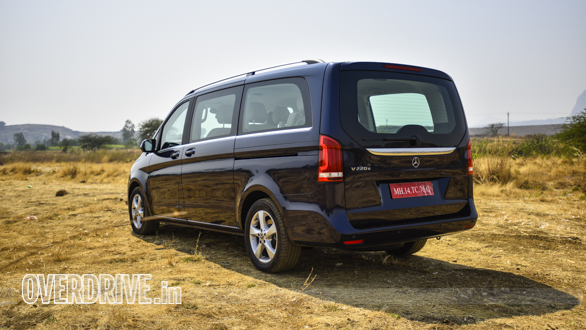 Cabin and Practicality
When we got our hands on the V-Class tester though, we acted more like brats who would park it next to a Ducati Superleggera or a BMW S1000RR HP4 in the garage. The V-Class can happily ferry an exotic motorcycle like these to a track day 1,500kms away, and yet make sure that you too arrive fresh, having driven in those comfortable seats. The cabin is indeed that large and the floor is absolutely flat - a big feat considering this is a luxury van and not a commercial application. It is extremely versatile too! 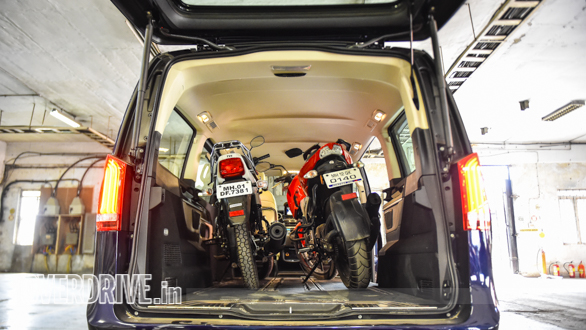 The rear two rows of captain seats are mounted on rails and therefore they can be individually adjusted for reach and are completely removable. Removing them is an easy affair and once you get the hang of it, it is a one-person job despite their weight. Putting them back on can be a bit of a task though, as their mounting points in the rails tend to slide easily and misalign, needing you to use a screwdriver to slide them back in alignment with each other. The rail mechanism can accommodate a versatile table or allow the seats to be placed facing each other. That is how we had one of our edit meets this month! 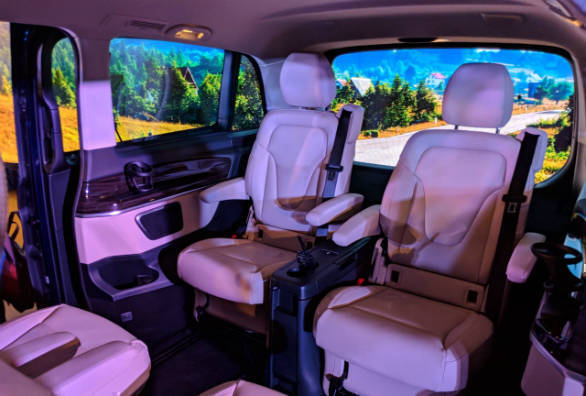 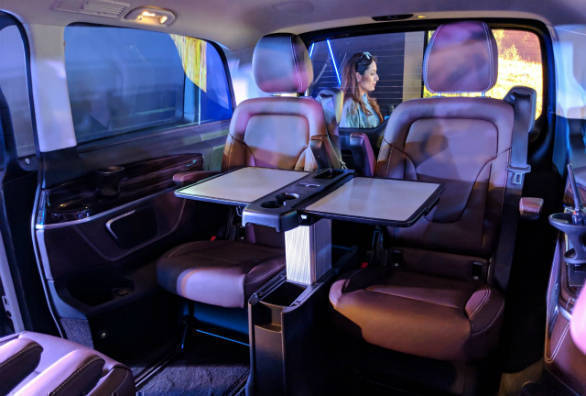 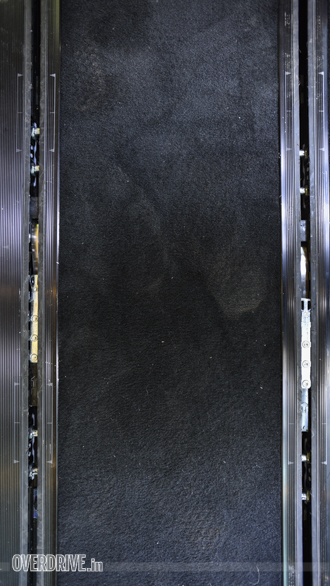 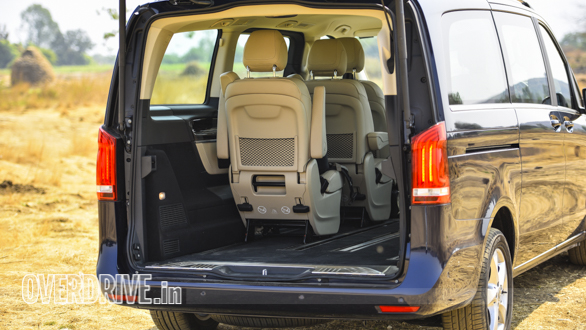 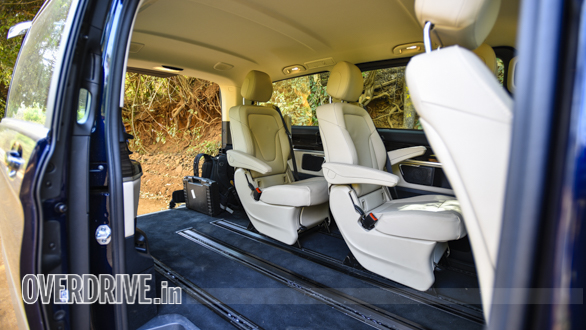 Yes, we are a small team. The V-Class seats six and pampers them with two-zone climate control, comfortably large seats, easy ingress and egress with the large, electrically operated sliding doors and a low floor, and an unbelievably roomy space - even more than the S-Class, if you like. With its ambient lighting and tastefully done trimming, the cabin has a lounged feel to it and its trumps its stablemates by offering a larger space to enjoy it in. The Burmester audio matches the tempo with crystal clear audio that is perfectly tuned for the size and space of this car. Compared to some of the luxury SUVs with cramped third-row seats, the versatility of the V-Class makes it better at brewing conversations and setting the mood in the car before you arrive at a sit-down or a party. Much like a stretch limousine, but smaller in length. 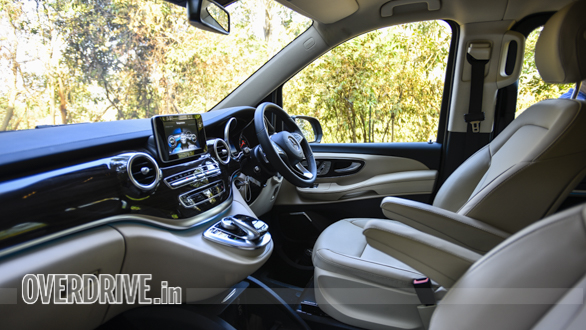 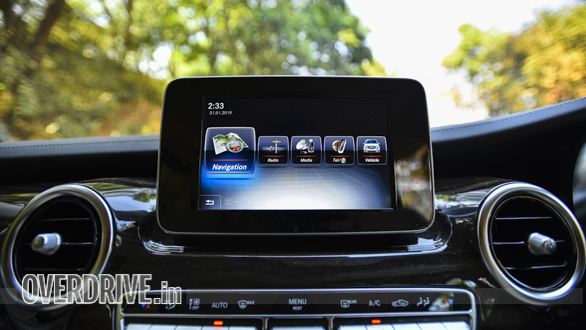 Engine and driving dynamics
This enormous cabin is ferried around town by the humble and familiar 2.2l four-cylinder diesel engine from Mercedes-Benz. It does everything right even for the slightly different intent of the V-Class - be it urban commutes or highway cruising, the engine never feels stressed even with all the seats occupied and that is courtesy of the tuning of the engine and the gearbox. It has a high degree of refinement and runs relaxed even at triple digit speeds. With an overall economy (tested) of 9.5kmpl, and a highway economy of around 11.3kmpl, the engine complements the multi-utility intent of the V-Class - one of which is touring ability. The seven-speed gearbox works extremely well too and the slow response times that we usually complained about with this gearbox in other applications, aren't much of a concern in the docile V-Class. The engine claims to add an extra dollop of torque under acceleration using an 'overtorque' function. It isn't a noticeable boost, but it probably has a role to play in the strong power delivery that the V-Class has even with a full load. The gearbox complements too and also ensures that the engine runs relaxed during most of the chores, without ever feeling lethargic. 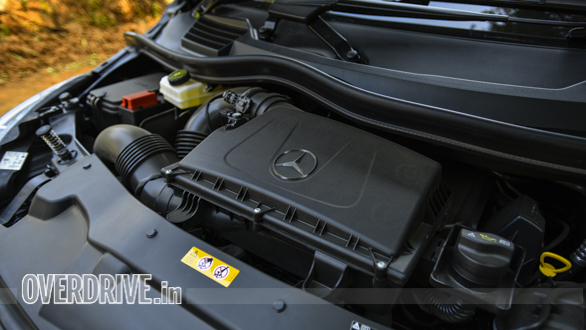 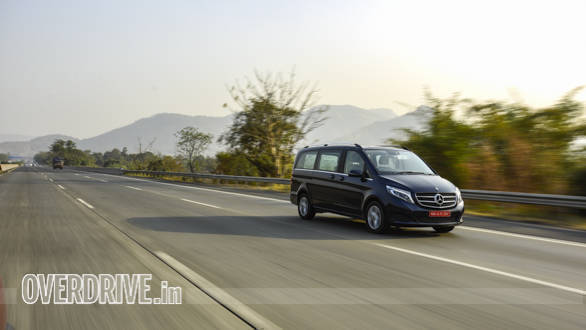 The effortless commuting and cruising capabilities of the V-Class can make it a viable alternative to an SUV as a family tourer - especially if your primary car is a luxury sedan. The lack of all-wheel-drive could raise a few eyebrows, but the low ground clearance doesn't make the V-Class much of a rough-roader anyway. It rides quite well over undulations and potholes though, even soaking the shaper bumps quite well for a German luxury car. The fuller the house, the better it rides, too. 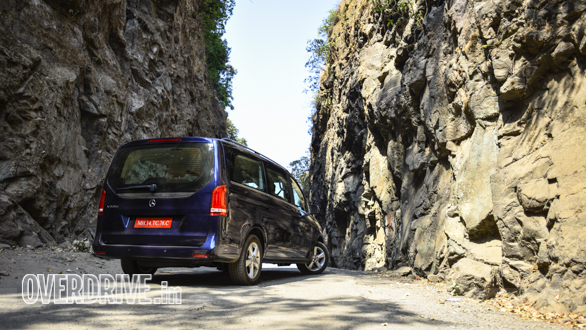 In typical Mercedes-Benz fashion, the cabin is silent even at highway speeds. The whole cabin is secured with airbags throughout the window-line, so irrespective of how the seats are placed during a collision, the passive safety elements seem specced and positioned right to protect the occupants. 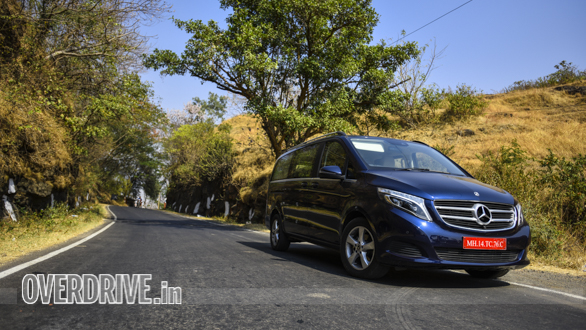 Around winding roads, the enormous wheelbase of the V-Class is evident. The tall body also induces a fair bit of body roll and driving this car does need getting used to if you are coming from a sedan. But the learning curve isn't too steep and there are enough electronics in there to make sure that this van never feels unnerving. 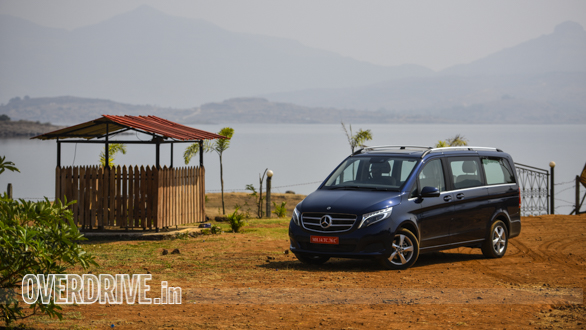 Verdict
The V-Class opens a new dimension for Mercedes-Benz in India (they even issued a global press release for it) and we hear that the carmaker already has quite a few orders coming in. While most of these seem have come from the fleet and hospitality outfits, we believe that the V-Class could find a sizeable number of takers in the private ownership category too. Compared to the more butch and blingy GLS (more so with the upcoming model that aims to dial up the aggression), the V-Class has the understated elegance that many still look for in a luxury car. In that sense, the V-Class is a perfect second fiddle to the S-Class, for when the whole family wants to travel together without comprising on the luxury and safety offered by a Mercedes.