If you are looking for a large luxury SUV for the family, the X5s and the GLEs of this world have you well and truly covered with their sleek looks and calming nature. But what if you were looking for something a touch more outdoorsy? There really isn't much at this price point, right? This is where the Jeep Grand Cherokee comes in. It's back in India after a fairly long gap, locally assembled and in its newest fifth-generation guise.

Set your sights on the Jeep Grand Cherokee and the sheer mass of American metal in front of you is endearing in itself. Although at 4,914mm long, 1,979mm wide and 1,792mm tall it's about as large as its competitors. 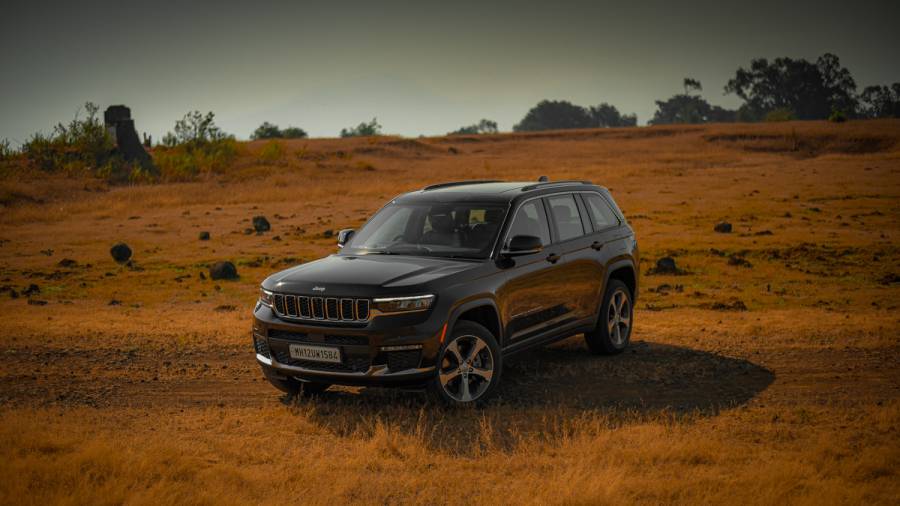 So much of this sense comes from the blocky but contemporary styling. Striking touches are the deep seven-slate grille over which the bulged bonnet folds in and the wide, slim LED headlamps. Contrasting with this is the big bumper that juts out with its simple but large openings. The chrome treatment too is subtle but effective. Jeep says thought has been put in to maintain good approach and departure angles with the short overhangs. This fairly functional aesthetic continues to the sides. The body panels are simple but tempered by a strong shoulder line. That continues with the large but low glasshouse with some flair coming from the chrome-lined D-pillar motif. The large 20-inch wheels with their simple but clean design add to this in their typical Jeep square wheel arches. 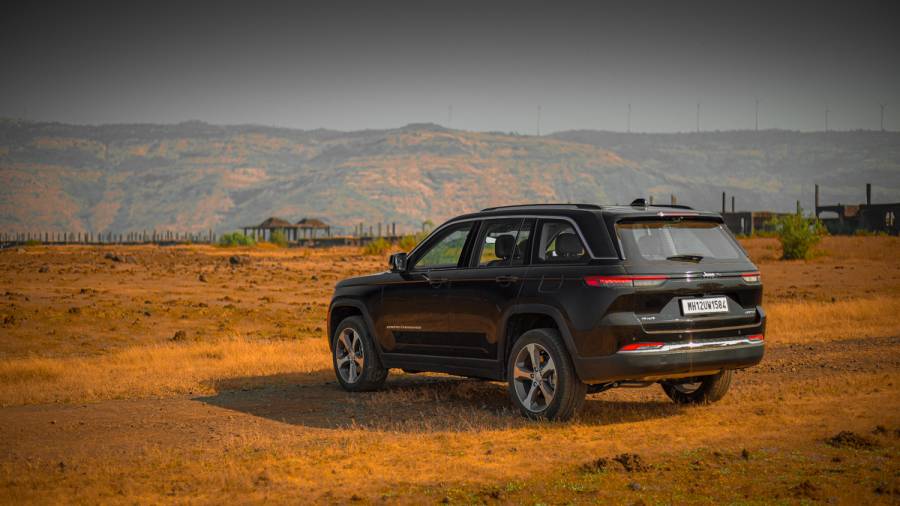 The rear is much like the front, attractive but not overtly flashy with its condensed taillamps and the contoured boot lid. There's some more chrome here again as well as some more cladding. The Grand Cherokee then does well to carry a sense of gravitas without being too dependent on flashy design flourishes. 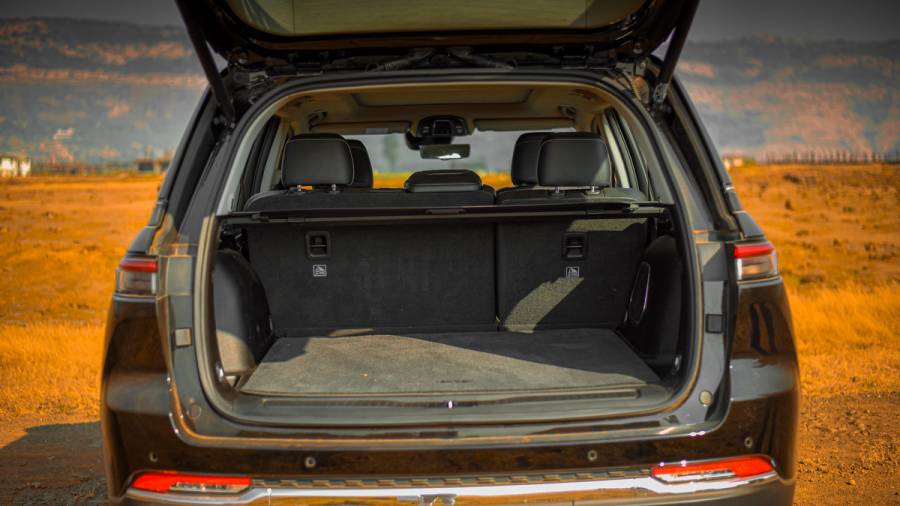 The boot is quite functional too. The load lip is high but flat and the space is wide and deep even with a space-saver spare wheel tucked underneath.

Jeep seems to have pulled out all the stops to now make the Grand Cherokee a credible luxury SUV choice. You get this sense on the inside with a design that isn't especially flashy but manages to feel luxurious. This comes from the way Jeep has managed to play off different materials cohesively. So how the dark soft leather on top, merges with the gloss black middle layer and the grey wood veneer is crisply done. This works with a contemporary design with slim vents, well-integrated screens and a strong accent running across. 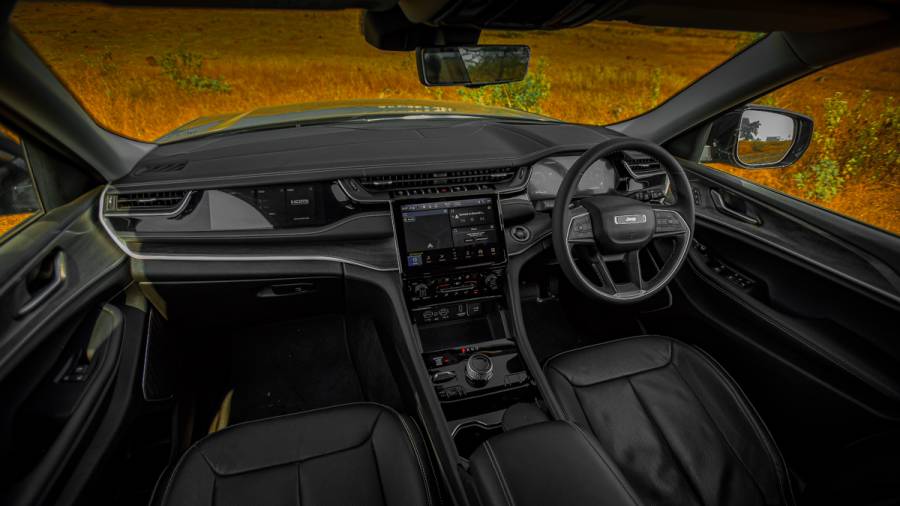 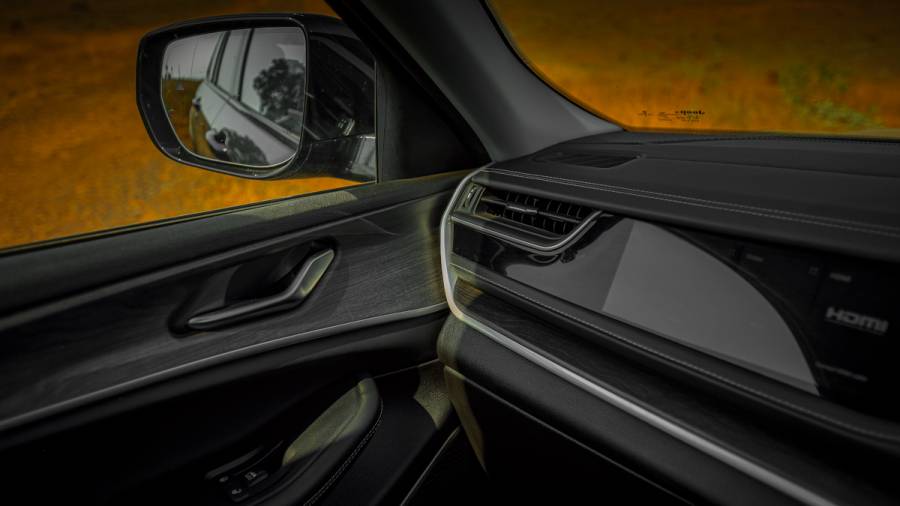 In terms of fit and finish, the Grand Cherokee does quite well too. The soft-touch plastics cover all of the top surfaces and there's quite a bit of leather padding on the doors. The switchgear feels hefty and well-damped, giving off just that right sense of toughness. If anything, the hard plastics in the footwell could have been of a better grade and as well fitted as the rest of the cabin. The all-black theme also could have done with some more contrast while there could have been a more vibrant ambient lighting package. 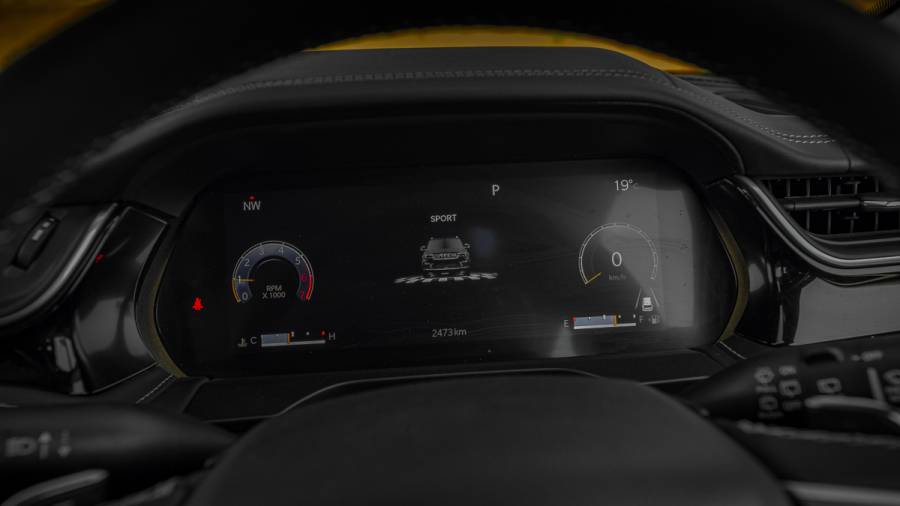 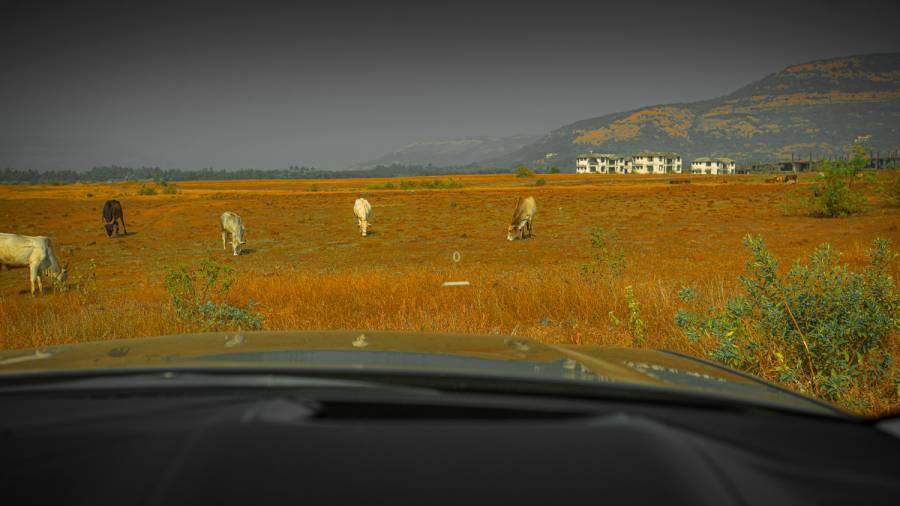 But if you like your screens, the Grand Cherokee has enough to keep the most demanding geeks satisfied. You get a 10.25-inch instrument cluster with its many layouts, thoughtful graphics and information. A HUD goes with this although it could have shown more data given its large 8-inch size. The 10.1-inch touchscreen is the same as in the new Compass, like the instrumentation, but this is no bad thing. You get wireless Android Auto/Apple Carplay, the responses are good and the menus are intuitive. Even the rear-view mirror is a screen with quite a bit of adjustment for the angle and brightness so it's easy to get used to. 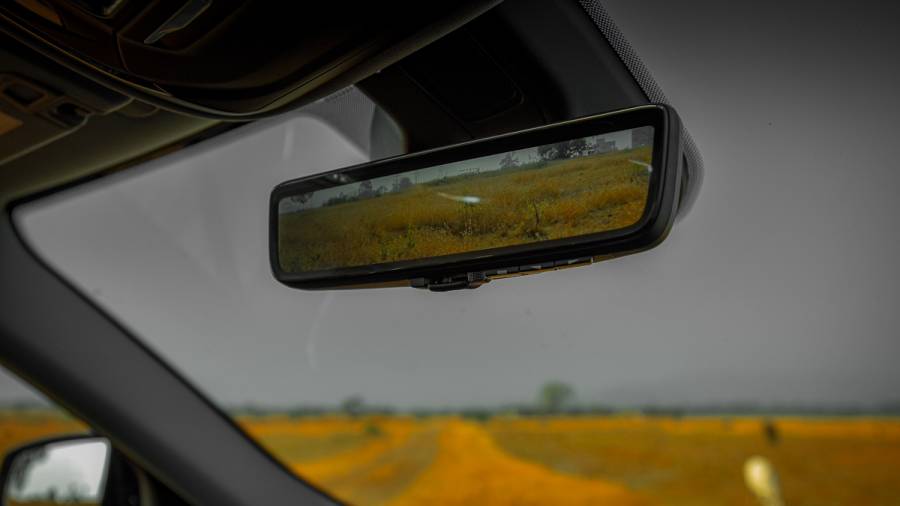 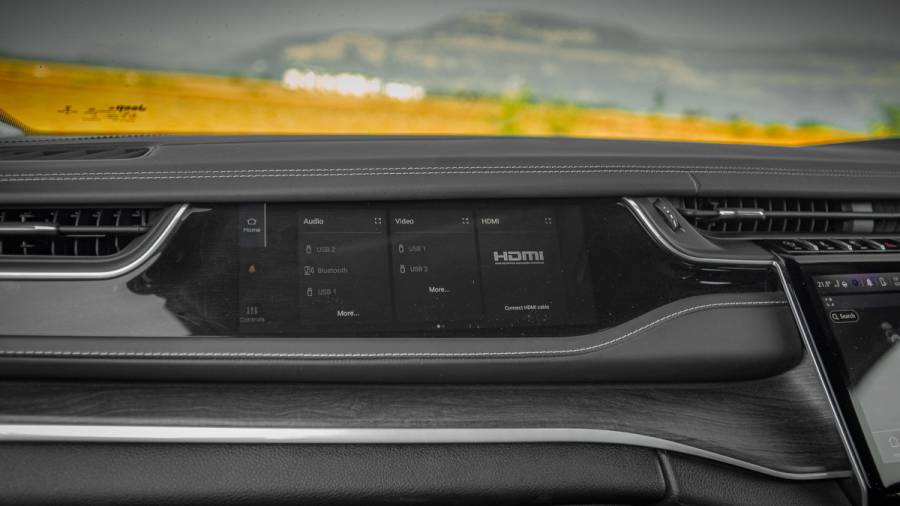 But the big party trick is the other 10.25-inch screen for the passenger. This is quite well integrated. It's low brightness and polarized glass cover keep it out of sight of the driver. The passenger can navigate to destinations through this, connect their headphones for music or even use an HDMI port to stream video content. 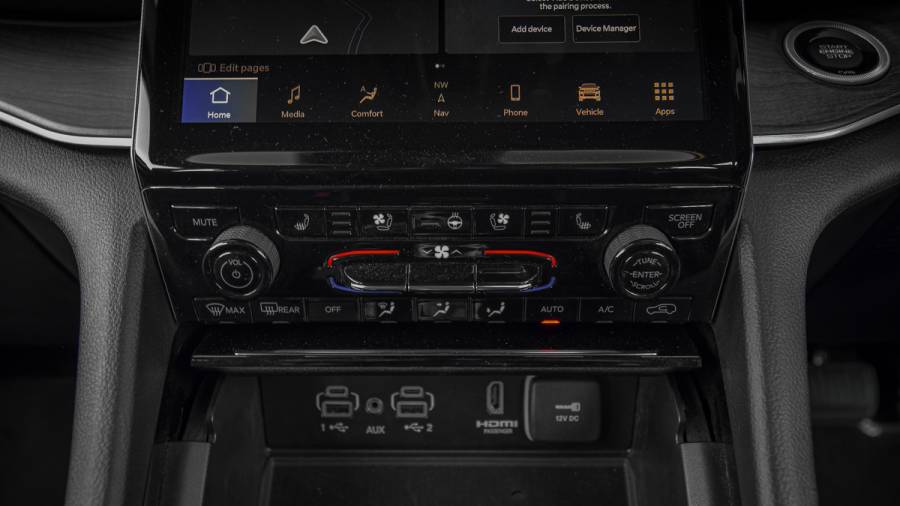 As techy as it is, practicality hasn't been lost on the Grand Cherokee. The bank of buttons in the centre look a touch intimidating but provide tactile controls for all of the functions you might need on the move like the climate controls, audio controls, heated steering wheel as well as the heated/cooled seats. This goes down to a button to shut off the lane-departure system as well as the passenger screen. 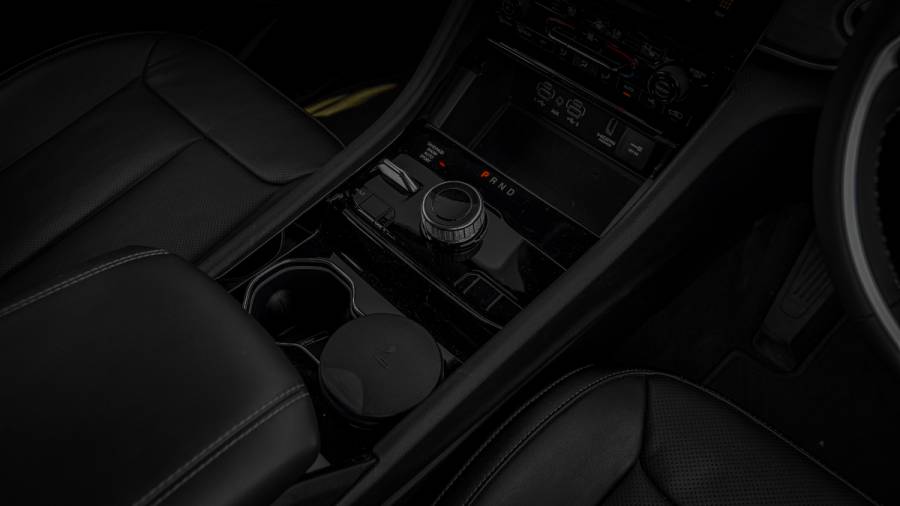 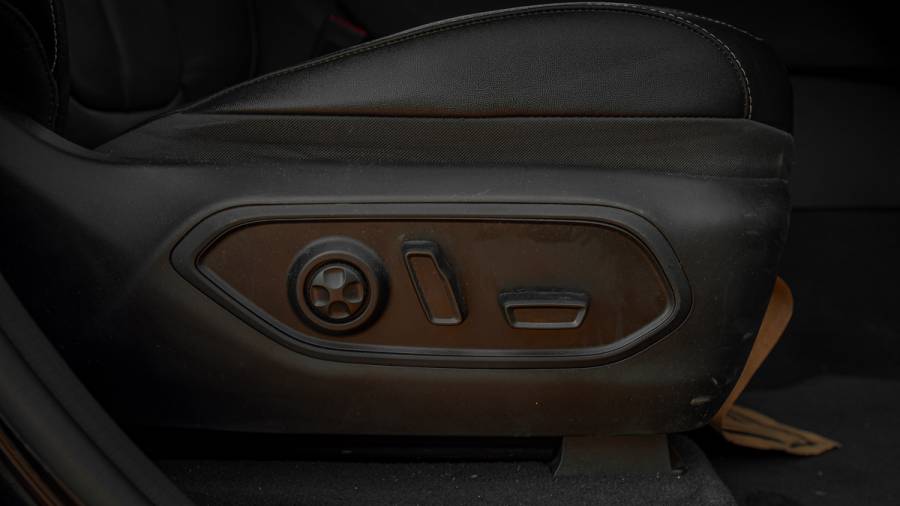 You even get both USB-C and USB-A ports, a large wireless charger and some deep centre cubbies. If anything, we found the rotary gear selector to be a bit fiddly to use. It tends to slip into park instead of reverse during say three-point turns, possibly due to the clicks being not quite as defined as ideal. The front seats are wide and supportive with all manner of powered adjustments. There's good thigh support so you don't miss the extendable squabs but the cushioning could have been better suited for long stints behind the wheel. If you are looking at the Grand Cherokee, the rear seat could well be the most important part of the SUV for you. The high floor means it's a bit of a climb in, but once inside there's great knee, leg and headroom. The wide seat is again good for those with a large frame and there's a comfortable reclining function too. Although, there could have been more thigh support. The narrow seat squab and high floor put you in a bit of a knees-up position which may not be too comfortable over long distances. The large panoramic sunroof and glasshouse make for an airy space. 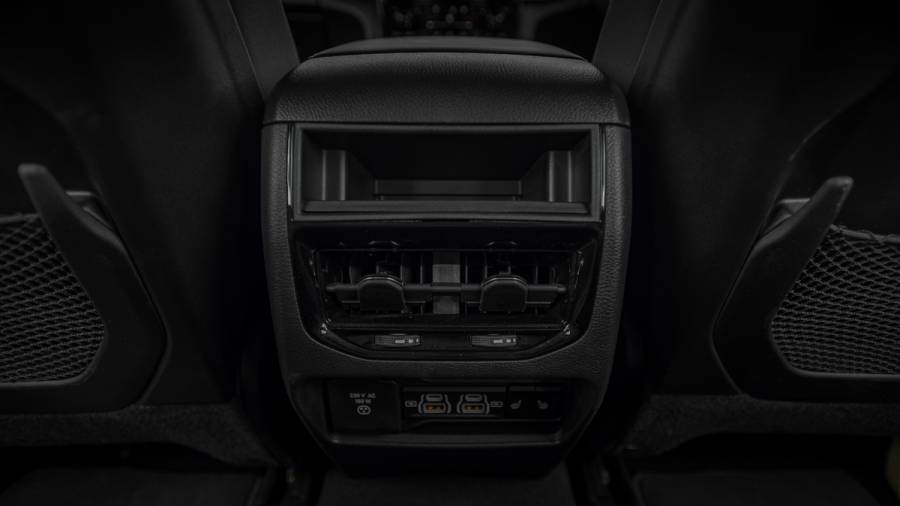 The lack of a separate climate zone is another miss but you get USB-A and C ports again, a full three-pin socket, useful storage spaces as well as sunshades. 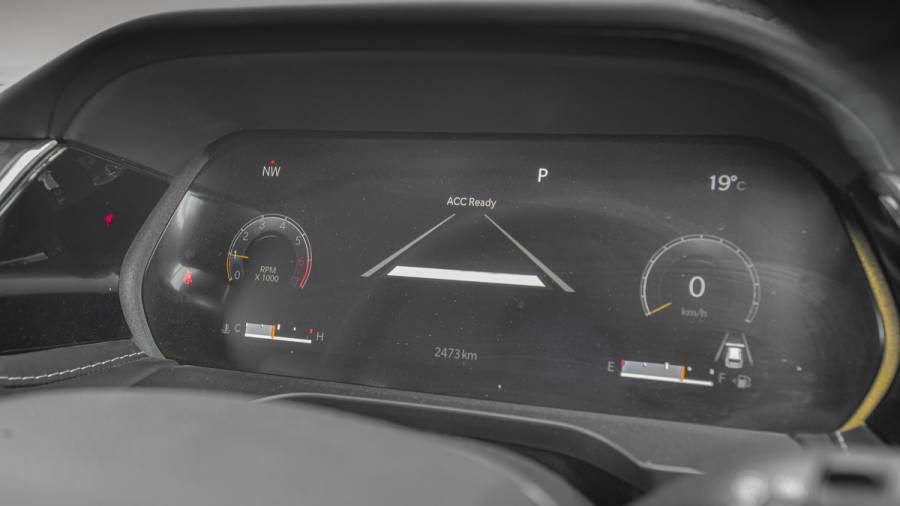 The Jeep Grand Cherokee gets Level 2 ADAS. The adaptive cruise control is quite easy to engage and controls speeds well enough but we found the lane-keeping function to be quite erratic. It didn't seem to follow curves on our highways and there wasn't any visual intimation at these times too, although the forward collision system isn't too heavy-handed with its interventions. For passive safety, you get a crisp set of 360-degree cameras with washers, 8 airbags, brake assist, TPMS and rear seat-belt warnings.

India is the first to get the right-hand-drive Jeep Grand Cherokee. Unlike the big V6 and V8 mills in the US-spec cars, this version gets the same 2.0-litre turbo-petrol as the Wrangler putting out 272PS and 400 Nm. Now the outputs might seem adequate but this small displacement motor needs some prodding before you are fully up and running. The engine feels a bit jerky and hesitant below 2,000 rpm which means that progress in stop-go traffic isn't as easygoing as it should be in a luxury SUV like this. 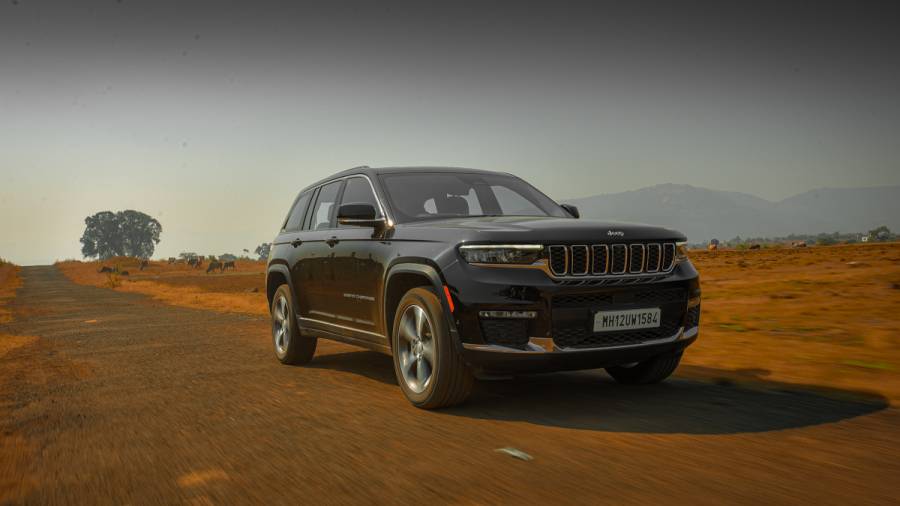 But this improves once the boost comes on where the 8-speed auto does a great job of keeping the motor on the boil. Power delivery now is quite energetic and there's a distant but tuneful thrum form the engine too. Here you can hold high speeds easily if not as effortlessly as some 6-cyl rivals. Overtakes aren't really a concern either. 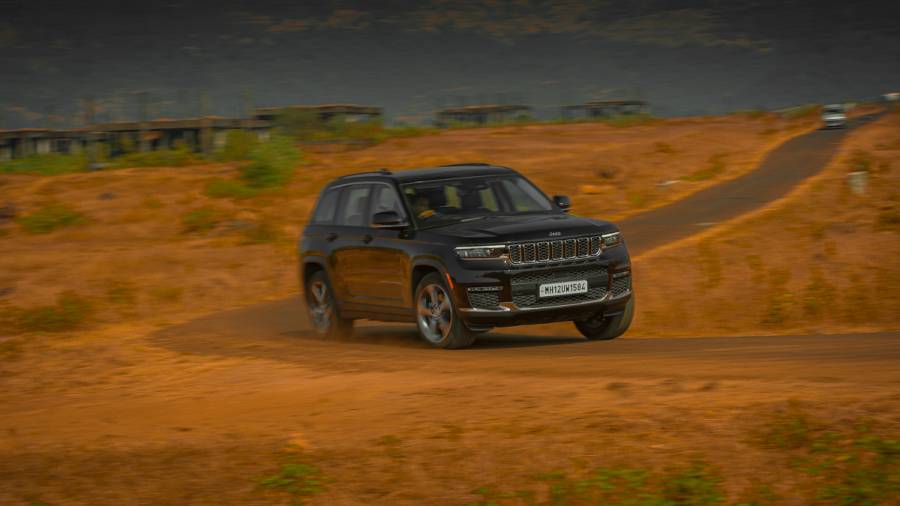 There is a sport mode to liven things up a bit which also shows you that the Grand Cherokee is more than a competent handler. Far from being a floppy American rig, this Jeep feels reasonably light on its feet. There is some pitch and dive but not any more than rivals. Roll is well controlled and the Grand Cherokee feels confident and predictable around bends, for such a large, 2-tonne plus SUV. The well-weighted steering helps with this sense, although it could slack off a bit more at low speeds.

As with any other Jeep, you also have that sense of toughness coming through from the ride. It even handles low-speed bumps in a firm but damped manner which then smoothness out into a solid sense of stability and pliant at high speeds. The only aberration is that the Grand Cherokee can feel a bit bouncy over high-speed dips. 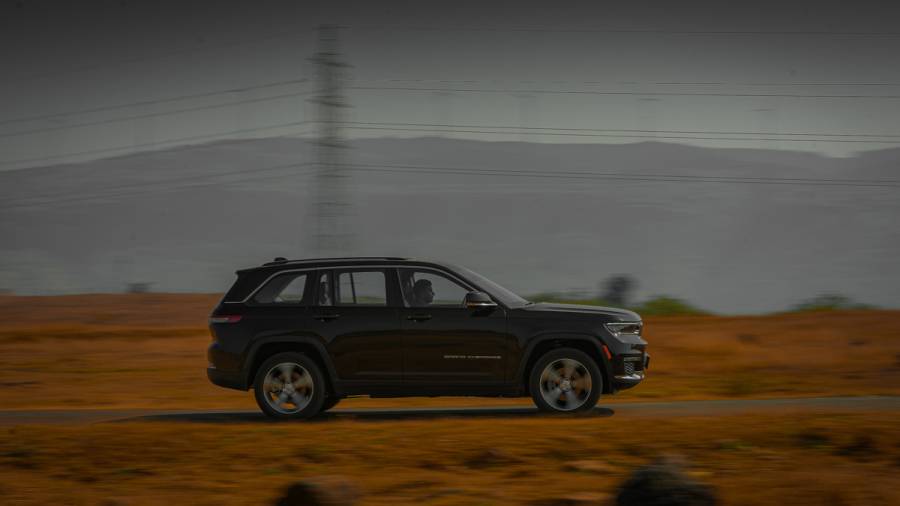 Expectedly, bad patches or rough trails don't seem to faze the big jeep. Even on these 20-inch wheels, it rides through these patches largely uneventfully. The solidity here feels almost like that of a ladder-frame architecture. This is the one area where it sets itself apart from the competition.

In all this, you have good visibility. The edges of the bonnet are visible and the window sills are fairly low. The wide A-pillar and large mirrors can be an irritant but then you have great rearward visibility with these and the camera feed. Another great trait is the refinement inside. The active noise cancelling does seem to work, the Grand Cherokee keeps wind and road noise out as well as anything at this price. 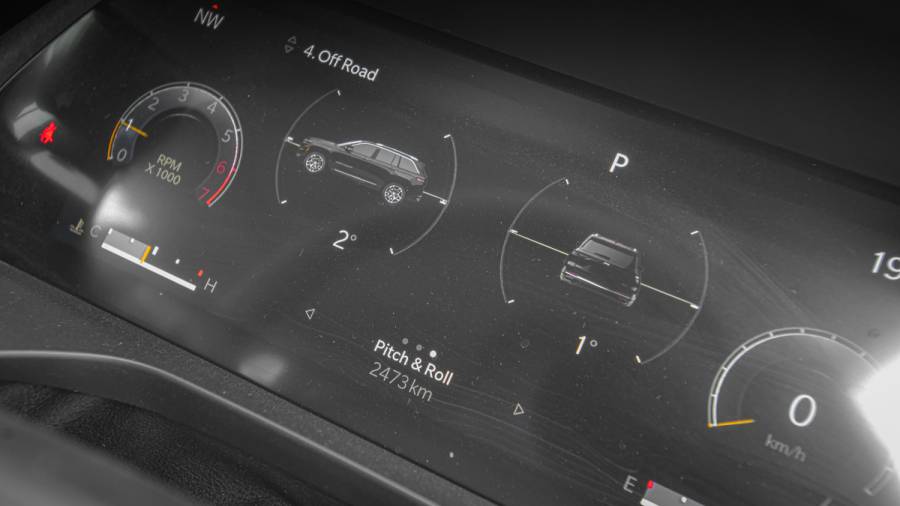 Now we couldn't do any serious off-roading with the Grand Cherokee but we don't think too many owners in India will be too keen on this either. But you get the base Quadra-Trac I 4x4 system for India. We think Jeep could have packed in the more advanced Quadra-Trac II system with its low-range mode, if not for anything but dinner-table bragging rights. Otherwise, you get the off-road modes, hill-descent and off-road view cameras.

Priced at Rs 77.50 lakh, the Jeep Grand Cherokee undercuts its rivals but only by a slim margin. This SUV will always have to contend with not having a three-pointed star or a blue and white propeller on it. But make no mistake, the Grand Cherokee is an option you cannot ignore in this segment. We would have liked a bigger diesel engine ideally and maybe some better seat comfort. But aside from this, the Grand Cherokee has it down with its massive features set, great styling inside and out, competitive driving dynamics and impressive rough-road ability.

What to expect from the Jeep Grand Cherokee 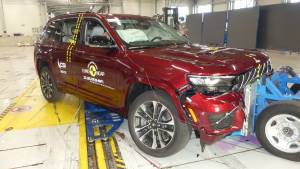 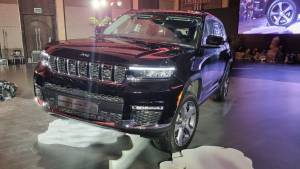