Before Hero and Honda annulled their marriage many years ago, the Splendor and Passion ruled the hearts and minds of the efficiency seeking populace in India. After the split, Honda set about taking on its erstwhile partner and introduced the Dream series of motorcycles in 2012. Fast forward to 2015 and Honda has just readied fresh ammunition in the form of the Honda Livo. Aimed at the younger motorcycling audience, who've just stepped into the galaxy of motorcycles, the Honda Livo aims to cater to the fuel economy conscious buyer who pays equal attention to style. You know, the same people who ignored the Twister that came and went before the Livo. Oh boy. 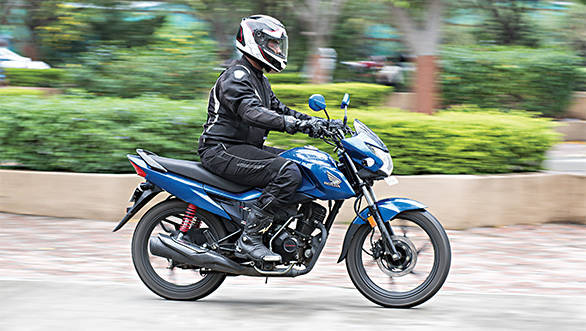 The Livo is a good looking 110cc motorcycle. Note the usable knee recesses

The Honda Livo is not a completely new motorcycle  it is the Dream Yuga in an up-market attire. Honda has chucked the boring sticker job panels on the Dream Yuga for a new set of, er, designer wear. The Honda Livo looks refreshingly new and I must say that in the flesh, it looks good. The headlamp is neatly ensconced in a bikini fairing that looks sharp. The visor flows well with the fairing panels and there is a tidiness to the face that I really like. The all-new hexagonal, twin-pod speedometer looks like Wall-E. Its layout is segment standard with speedo and odo on the left with the fuel gauge taking pride of place in the right pod. 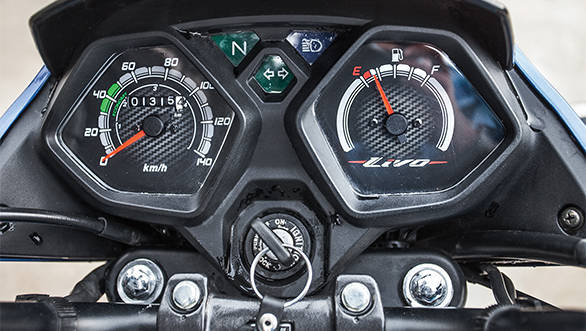 The tank is another attention grabber that's well executed. The design is chunky with sharp crease lines that accentuate the tank. These lines continue further towards neatly integrated plastic tank extensions, adding extra visual mass.
The side panels are bisected into two halves with the upper portion getting body coloured paint. The lower half is black plastic with one end forming a pseudo air scoop that merges into the rear panel while the other end extends to meet the base of the tank extension. 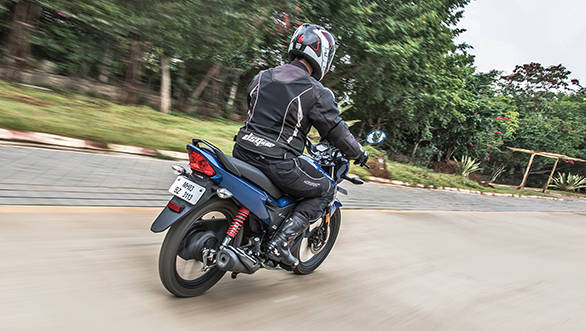 Rear three quarter reminds you of the Dream Yuga

The tail section is the only giveaway of the Livo's Dream Yuga origins but even here the designers have tweaked the panel to form a design consistent with the rest of the motorcycle. Overall, the motorcycle looks appealing and the quality of the plastic body panels is excellent. The seat offers decent derriere room but it could do with a little more firmness. The seat is too soft for long hauls and butt aches begin after 70km on the road. The fit and finish is a notch above the Dream Yuga, however, there are a few areas that I wish stood for the Honda quality was once known for. The paint on the brake lever, for instance, had already worn off a bit with just 1,000 clicks on the odo. The mirrors too come with a poorly finished, body coloured plastic cover that looks downright cheap. The matte effect on it also means that it will be a pain to keep clean as the miles roll on the odo. Honda should have stuck to all black or ideally, painted the mirror cover.

The Honda Livo gets the same 109.19cc, air-cooled, four-stroke motor that's been around since the Twister was introduced. Also seen in the Honda Dream Yuga, the engine offers decent performance and its sprightly nature makes it one of the livelier 110cc motorcycles in the market. There is a modest surge as you work your way up the gears and as the 0-60kmph time of 8.2s suggests, this is a quick 110cc motorcycle. We clocked a top speed of 84.2kmph. 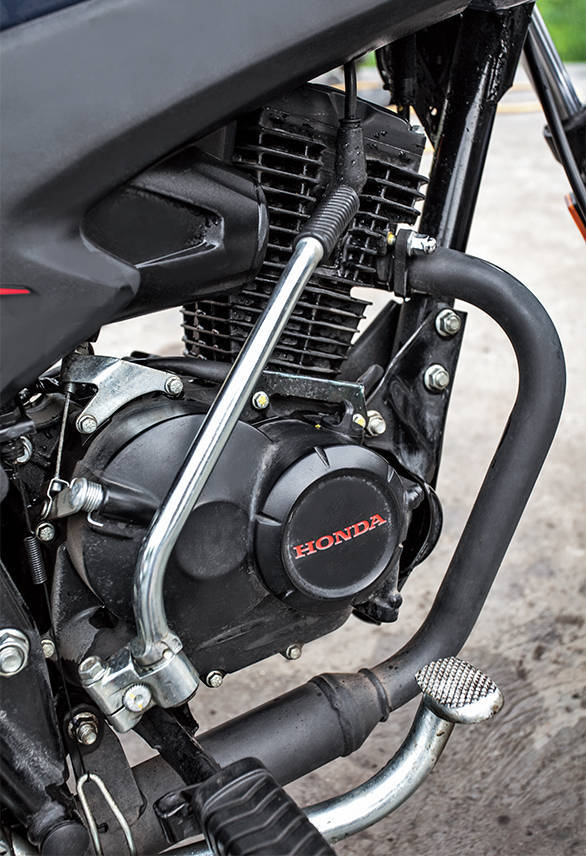 The 109.1cc engine has been around since the Twister

Pottering around town is easy. The engine has enough bottom end torque, allowing you to stay in third gear even at 30kmph. At this stage, an attempt at taking advantage of the gap in traffic requires you to simply roll on the throttle.
The engine is stress free at speeds up to 65kmph. Even at 80kmph, the engine does not feel too strained. However, it would've been great if Honda had provided a fifth gear and you do feel the need for it at speeds above 80kmph. The gearbox is slick and shifts are positive. The engine has that typical Honda refinement and vibration is well controlled even when you've wrung the throttle all the way to the stop. This segment is about economy, of course. The Honda Livo delivered an incredible 81kmpl on the highway run, with that figure dropping to 70kmpl in the environs of the concrete jungle.

The Honda Livo under that new skin has the same frame as the Dream Yuga. This translates into a planted ride and the Livo is stable, even at top speed. The suspension soaks up bumps and undulations quite well, however, the rear unit does feel just a bit too stiff at the stock setting, especially when you encounter potholes. 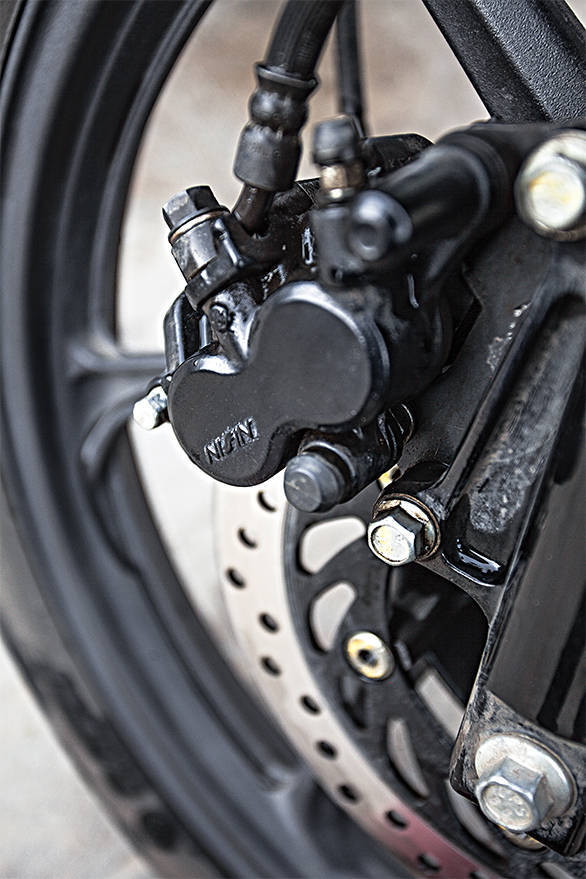 The Dream Yuga was a confident handler and the Livo feels even better, the 3kg weight gain notwithstanding. The chassis offers decent feedback and you can corner this motorcycle. Of course, those narrow looking tyres won't encourage you to attain serious lean angles, but the Livo is quite reassuring when leaned over. It's also a cinch to ride through traffic. The disc brake on the top-spec Honda Livo was, to my surprise, excellent. It has great bite and progression that in turn adds oodles of confidence. The tubeless MRF tyres also play their part in the braking performance. 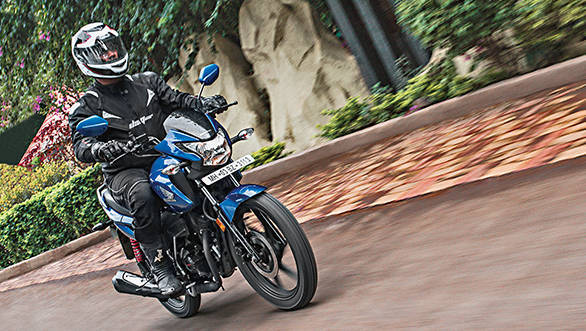 Honda is positioning the Livo as the upmarket alternative to the Dream Yuga. And as expected, given the Twister's engine and the Dream Yuga's underpinnings, it's an effective little commuter that knows how to have a little fun too. The trouble is that this is more or less the exact same proposition the Honda Twister was  a motorcycle that we really liked. So much that it was our 2010 Bike Of The Year. However, commercially, the Twister wasn't the breadwinner Honda hoped it would be and we wonder if the Livo can change that. Priced at Rs 65,253 on-road Mumbai for the top model with electric start disc brakes and alloy wheels, it certainly appears to have the goods to command that slightly premium price.

Which brings us to the final piece of the jigsaw  the name. Livo. What does that mean? Yeah, we don't know either.