In a bid to clean up its nomenclature, Mercedes-Benz decided to add the letters 'GL' to all their cars that could go off the road - a nod to the Gelandewagen (or the G-Class), which is the marque's ultimate off-road vehicle in mass production. A suffix like A, C, E or S from their sedan lineup is then added to those letters to denote the equivalence of luxury and equipment in the SUV. Going by that logic, the GLE would be an off-road capable vehicle with E-Class level of luxury. But what if you would want it the other way round - the elegance of an E-Class, coupled with go-anywhere capability? If that is what you seek, then you don't need to wrap your head around these suffixes and prefixes. You could simply walk into a Mercedes-Benz dealership and start configuring an E-Class All-Terrain. 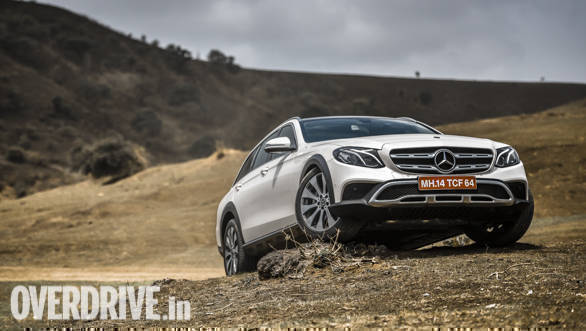 To give it its off-road capabilities, the All-Terrain employs the Air Body Control air-suspension from Merc's kit, which gives it the ability to ride 15mm higher than the coil-spring setup. A further 14mm gain in ride height comes courtesy of the 245/45-section tyres shod on 19-inch rims. The All-Terrain wears matte black cladding around the wheel arches and bumpers, and dons scuff plates on all sides for protection against debris that gets kicked up on trails or broken roads. 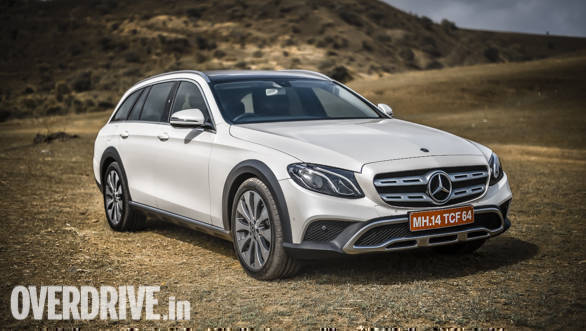 The E-Class All-Terrain has rugged cladding all around, which imparts a butch stance to the car 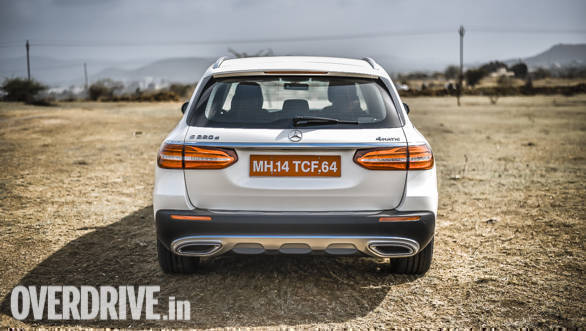 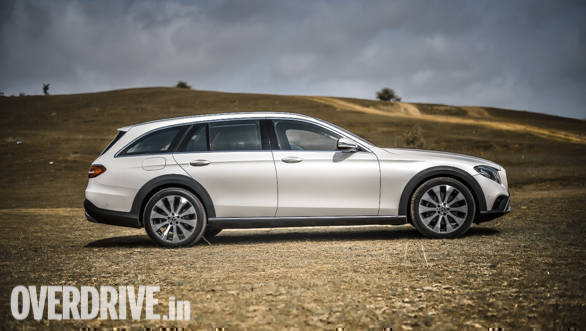 Despite its enormous visual length, the All-Terrain still sits on a shorter wheelbase than the LWB saloon variant sold in India 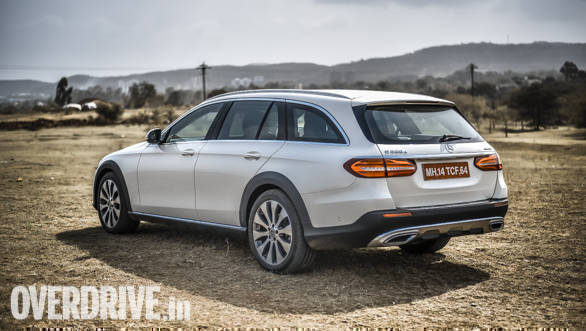 While the E-Class face is familiar, it has a chunkier perforated grille that comes from the GL line-up. At the rear, a wide chrome bar on the tailgate and elongated wrap-around taillights give the All-Terrain a wide-bodied appearance to visually counter-balance the higher ride height. 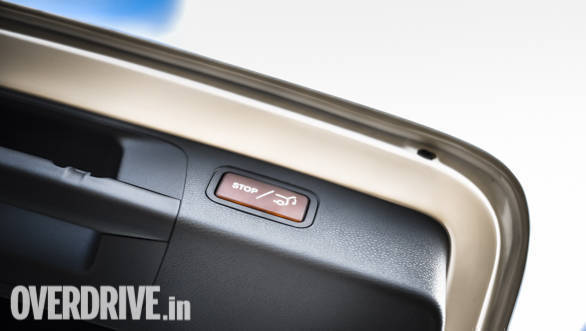 The Mercedes has an electrically operated tailgate and given its low height, its easy to reach 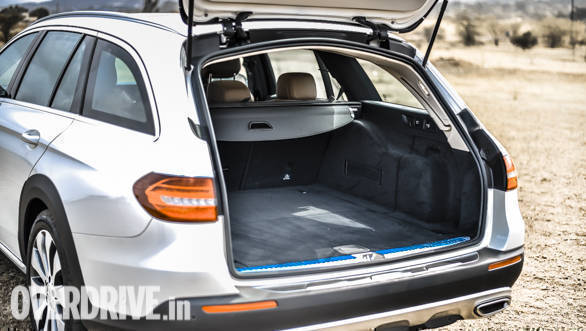 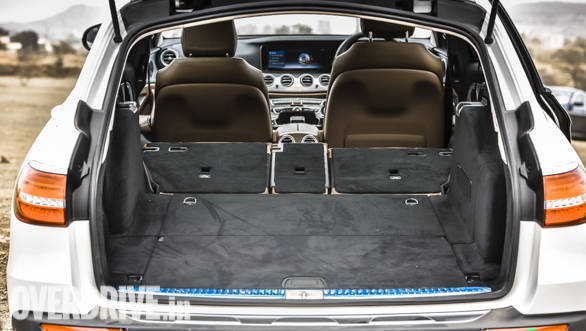 The default boot space is 640l, expandable to 670l by reclining the rear seats forward by 10 degrees, or a maximum of 1,820l by electrically dropping the entire rear bench and creating a flat floor for your cargo 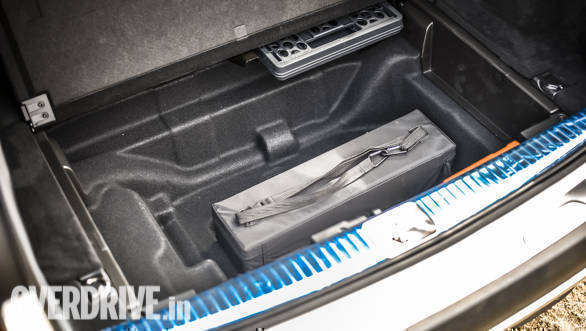 Additional storage under the boot floor stows away a folding picnic basket (pictured below) and the tool kit. The car will also ship with space saver spare wheel which isn't shown here 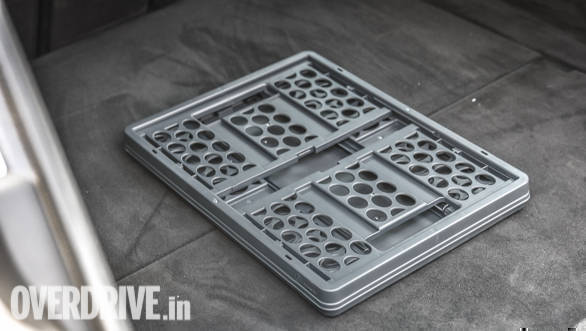 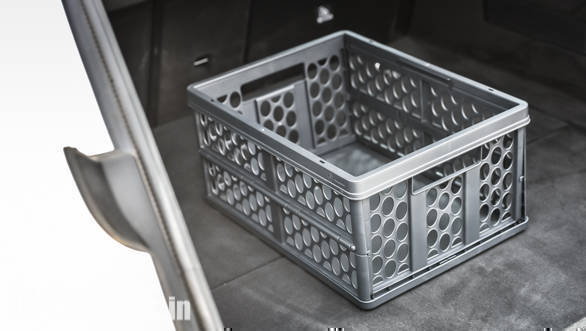 The tailgate is electrically operated, has a handsfree function and opens up to reveal a massive 640l of boot space, which is almost similar to the cargo volume of the GLE coupé. The rear seats can't be reclined backward for more comfort like the saloon variant, but can be reclined forward by 10 degrees, to increase cargo volume to 670l. A 40:20:40 split on the rear seats adds further versatility and folding them flat gives you 1,820l of cargo capacity! Some of it will be taken up by a snap-on, space saver wheel when the car goes on sale. The loading lip is wide and low, making it easy to load your suitcases and golf kits or enabling easy ingress and egress for your pet. Thankfully, the All Terrain crosses out the two rearward facing jump seats that Mercedes-Benz offers in the boot of the Estate variant.

How is the cabin?
The cabin has a five seater arrangement, but the tall tunnel console means that the rear seat is best for two adults and a kid. While the seating isn't as plush as the E-Class saloon, what with its reclining seats and acres of space courtesy of the extended wheelbase, the All Terrain's seats are superbly comfortable and roomy. Ingress and egress is easy in all four corners, the headroom and knee room is great and the panoramic roof adds the right amount of brightness to the cabin that done up in an otherwise dark combination of black and tan. 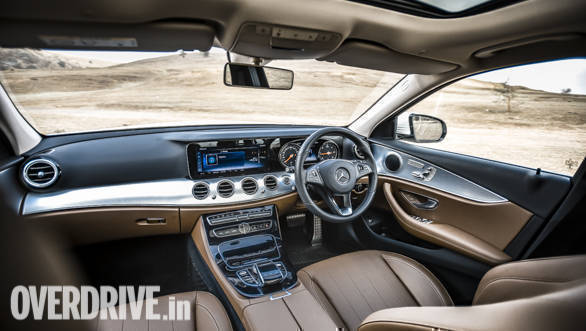 The cabin is plush and inviting. The darker colours seen here give it a sportier edge compared to the saloon variant 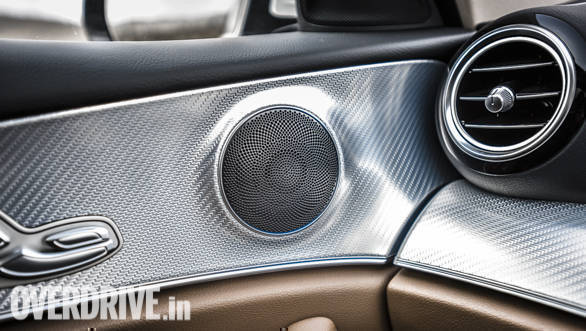 Sadly, no Burmester audio in this E-Class 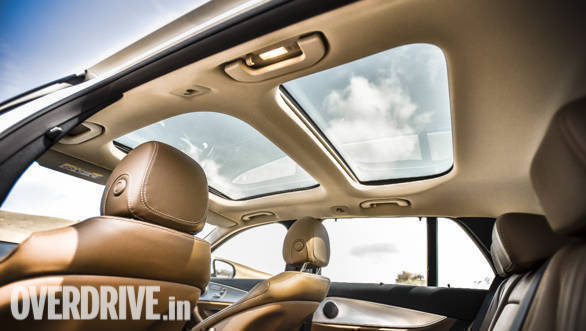 The panoramic roofs adds plenty of airiness to the cabin! 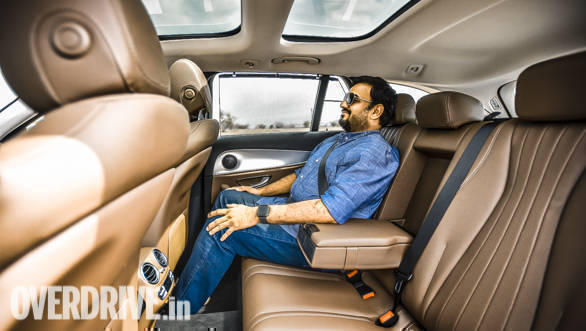 The materials are typical, premium E-Class and the equipment is familiar too - analogue instrumentation extending into a 12.3 inch digital infotainment screen, touch sensitive switches on the steering wheel, and ambient lighting with a 64-colour palette to choose from. The distinctive elements are the sports seats up front, drilled metal pedals and the All-Terrain badging here and there.

Why sports seats and pedals?
Simply because the E-Class All-Terrain is quite sporty to drive! The air-suspension has a firm character to it which translates to good fun around the twisties by giving the car a pretty flat ride. The short-wheelbase also makes for nimble handling dynamics compared to its saloon counterpart, and turn-ins are surprisingly quick for the tall tyres. Flick the Dynamic Select switch into Comfort mode and things soften up (only a bit) to make the ride comfier. That said, the firm character of the suspension does tend to get noisy over sharp bumps and ruts. 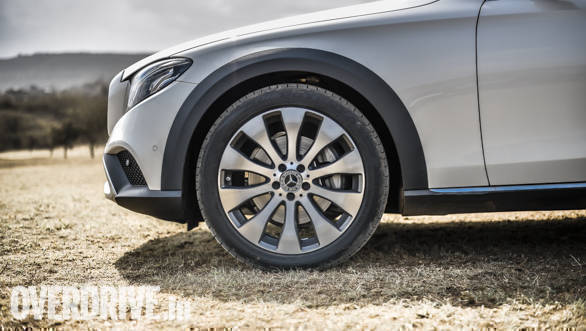 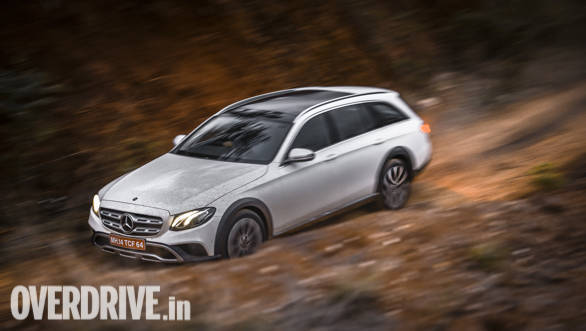 The ride height can be raised to tackle the broken roads, mild off-road trails and speed humps

So when the going gets tough you move to the All-Terrain mode which is exclusive to this car. It's changes the display to show readouts for the steering and vehicle angles, alters the drivetrain for better low end response and raises the suspension by a further 20mm to prevent the underbelly from scraping against terra ferma. The raised ride height only works till 35kmph, beyond which the car will automatically lower itself. Maintaining that speed limit seemed like a challenge on the dirt trails, given how nicely this car handles it all and so for the first time in my life, I summoned the services of the car's speed limiter function. 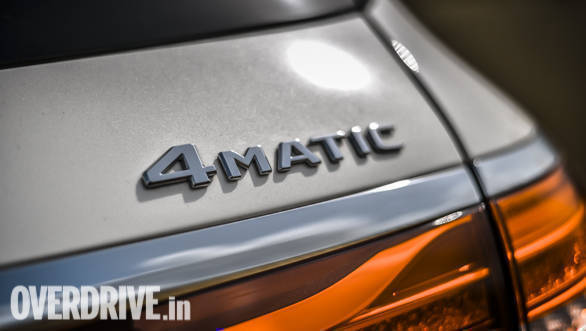 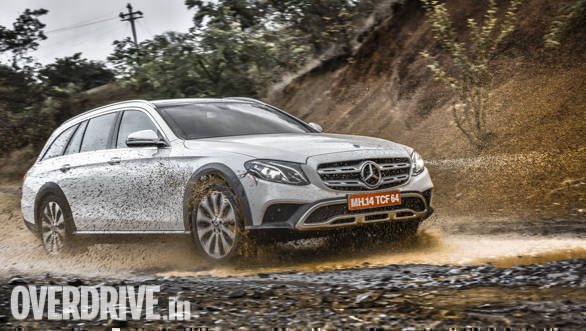 This car's ability off black top isn't about the higher ride height alone though. The E-Class All-Terrain also employs the 4MATIC AWD which has been fine tuned using learnings from the GLE. It splits the torque between the front and rear wheels quite discreetly and without imparting much understeer even when pushing hard on tarmac or off it. On the rain soaked trail, the setup was quite impressive despite the road biased tyres. But slushier terrain would need knobblier rubber.

What drives the All-Terrain?
Motivation for this car comes from Merc's new four-cylinder 1,950cc turbo-diesel engine that we have already come to like in the saloon for its refinement and cruising capabilities. It puts out 194PS and 400Nm and claims to propel the car from standstill to 100kmph in 8s - which is on par with other 2.0l engined SUVs in this space. Top speed is governed at 232kmph. 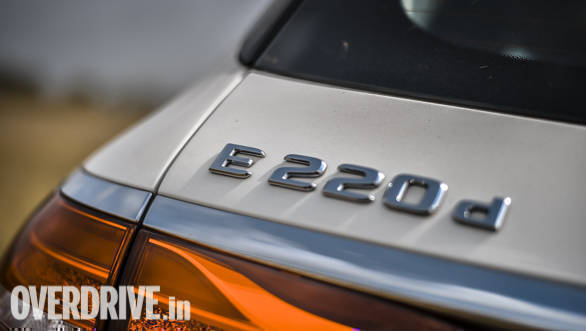 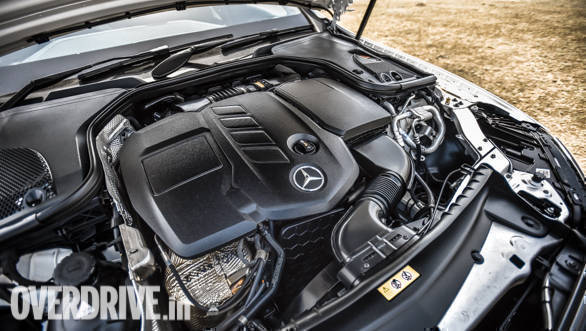 The Mercedes-Benz E-Class All-Terrain E 220 d is powered by the new 2.0l four-cylinder turbo-diesel that puts out 194PS of power and 400Nm of torque

The power is fed to the 4MATIC system via the slick 9G-TRONIC nine-speed automatic transmission. While the gearbox is little bit slow to respond when you go pedal to the metal, it reacts quickly to part throttle inputs. This nature makes for quick overtakes on the highway, but needs getting used to around bends and off-road trails. The easiest way out is the use of paddle shifters. Once you get used to the behaviour of the drivetrain and the various driving modes, you realise that the E-Class All Terrain is quite a delightful car to drive and its ability to go off the beaten path makes it a rather sweet deal. 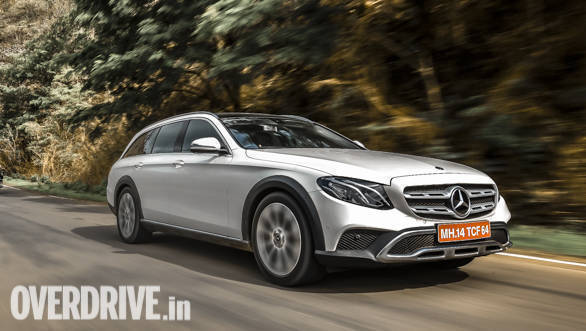 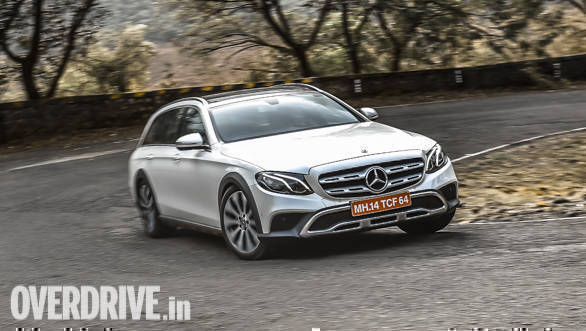 The air-suspension has a slightly stiffer setup, which in turn gives the Mercedes-Benz E-Class All-Terrain sharp handling characteristics too 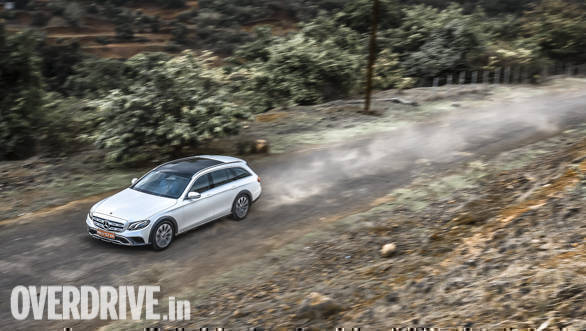 Off the road, the setup seems a tad too firm for my liking 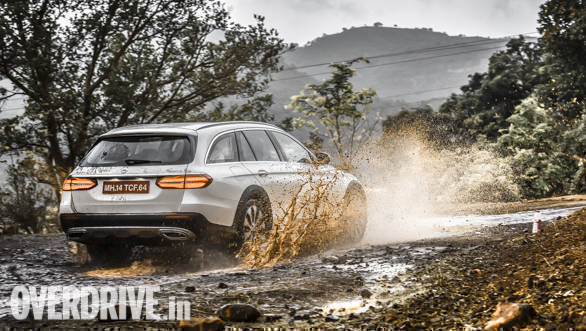 Verdict
That said, the E-Class segment is largely populated by businessmen who are driven around. Those who need better off-road capabilities go with the flow and settle for an SUV instead. Despite that clear demarcation, Mercedes-Benz hasn't shied away in the past from introducing various E-Class based body styles like the coupé and convertible to the Indian market - all in an effort to provide the consumer with a bouquet of options. The All Terrain too falls in line with that school of thought and in that, it targets a niche audience. It quite nicely plugs the gap between the saloon and the SUV, but does so with a unique character that does not feel like a compromise between the two body styles.