The old Figo was a great car, loved very much by enthusiasts for its great handling but it just didn't manage to spark the same enthusiasm from the masses. The Figo now returns with an all-new car and a new engine tune that is all set to light up the market again. We pitched it against the Hyundai Grand i10 - one of the best rounded products on the market and the winner of our last shootout in this segment. 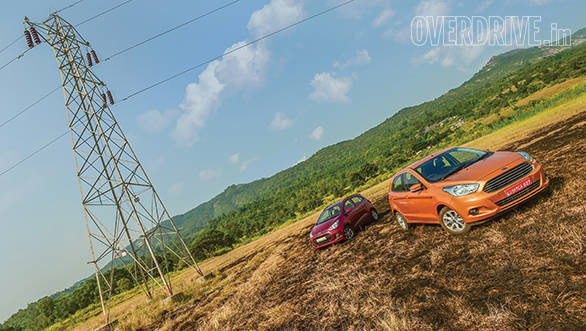 The Figo is quite the looker and that large air dam up front and strong straight rising shoulder line give the impression that it's been built for speed and performance. In its company the angular fluidic lines of the Grand i10 seem to soften a little. Not that the grand isn't a looker in its own right, it's just that the Figo looks far more imposing. They both sport looks that should appeal differently to buyers but I find myself gravitating to the more aggressive looking Aspire. 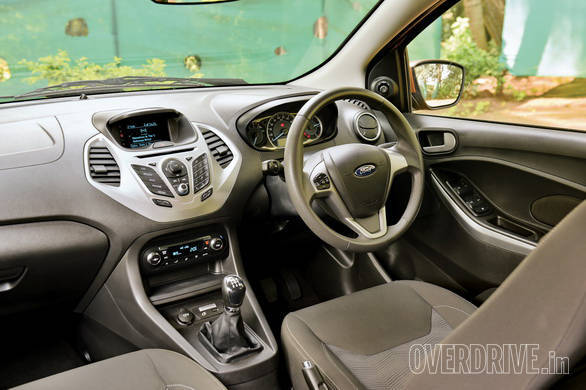 The Ford's interiors are nice and we'll laid out

On the inside the Figo is very Ford and people familiar with the Eco Sport will feel quite at home in this cabin. The interiors are plush with a mix of hard and soft touch plastics that do somewhat break the monotony of the all-black interiors. There is lots of space on offer with a lot of room in the rear for passengers, even with large people sitting in the front. And overall the cabin does feel quite airy for a family hatchback. 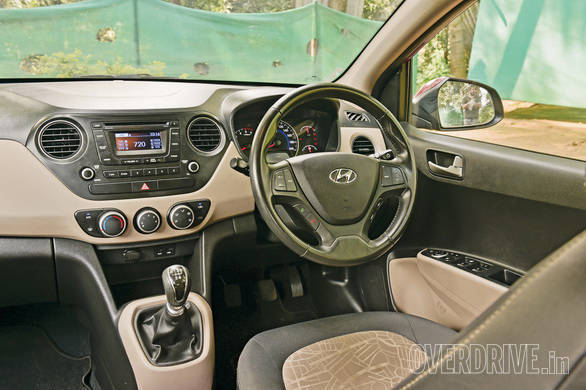 The Grand i10 cabin sports a two tone beige and black interior and has a similar amount of space on offer for four full sized occupants. And even though on the outside it looks the more compact of the two, from the seating pictures you'll notice that I have just as much knee room in both. 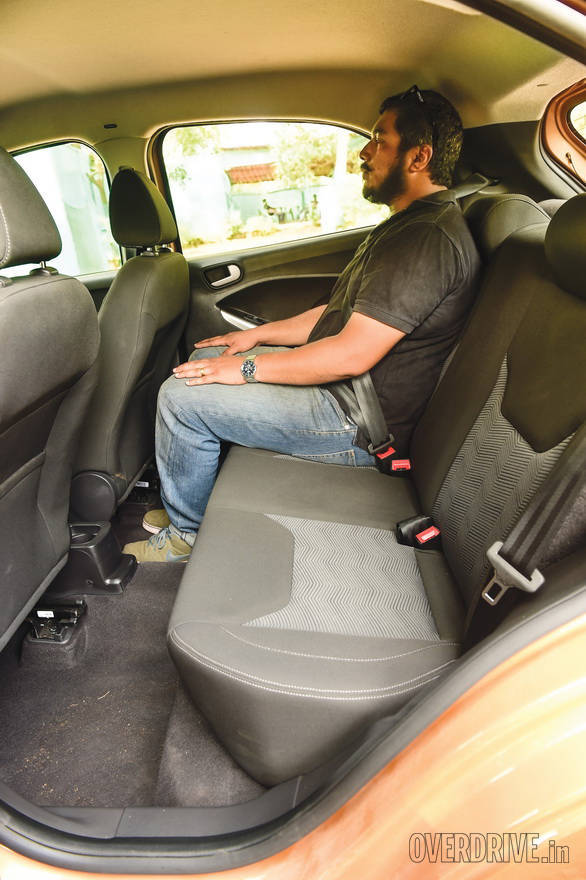 The Ford Figo is a roomy cabin with a comfortable rear bench, though the rising shoulder line means smaller windows 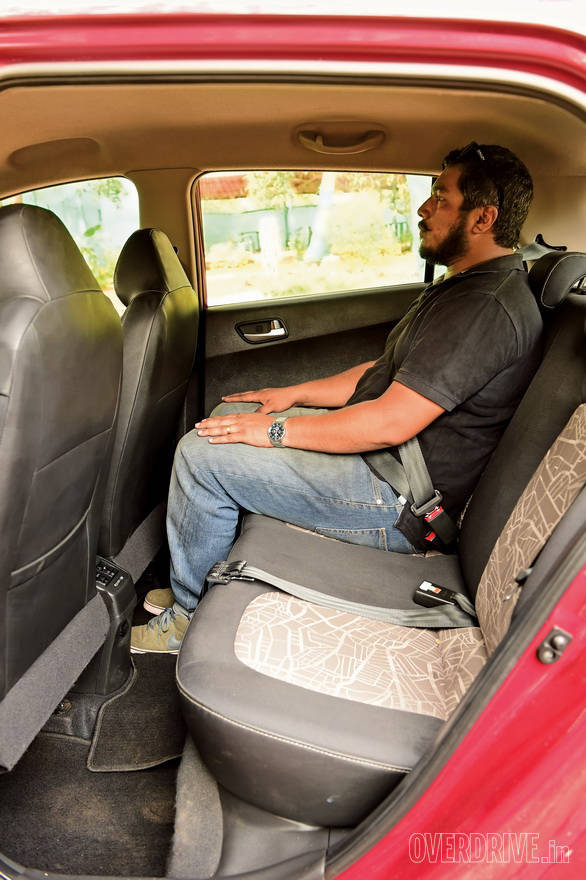 They are pretty even on features with equally long lists. The Hyundai comes with rear parking sensors, rear air con vents and a simpler infotainment system. The Figo on the other hand also impresses with 6 airbags, Sync voice activated infotainment system and clever MyKey safety features. The Grand i10 does have a better layout of storage spaces with bottle holders in all four doors (missing in the rear doors of the Figo) as well as the rear air con vents.

For me the interiors of the Hyundai are a little better looking with just as much space as the Ford and are my choice for travelling space with the added convenience of the rear air con vents.

With a handicap of 29PS, 55Nm and one cylinder less, the Hyundai was never going to have any chance in pedal to the metal situations. And the Figo absolutely creams it in our performance tests but does that really matter in the real world? While the difference in numbers is large the way the two engines behave is what is telling in this tale. 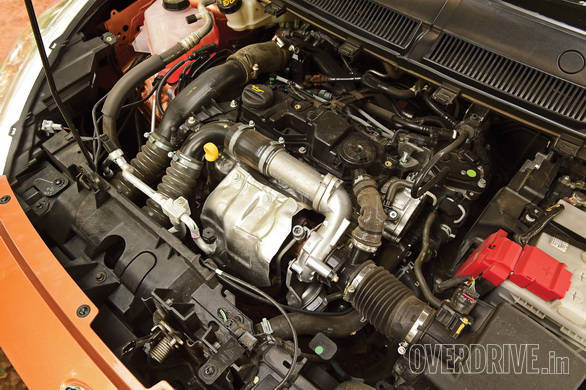 The powerful 1.5 diesel is the hero in the Ford Figo's package

The Ford is clearly the better power plant with much more power and torque from the 1.5-litre four cylinder engine. It's linear too and so there is no sudden surge of torque at a set RPM, something common with smaller turbo diesels with high outputs. 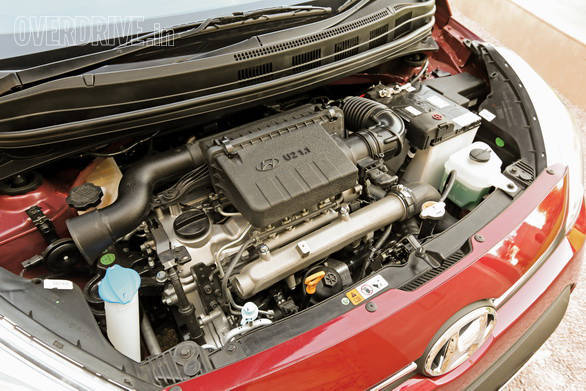 The 1.1, three cylinder, diesel in the Hyundai Grand i10 is refined and efficient

That said the Hyundai engine is not bad at all. For a three cylinder power plant it's refinement is quite exceptional. And it's more than sufficient for the job at hand. It was also built with efficiency and durability in mind. With 19.3kmpl in the city and 24.2kmpl on the highway it certainly is efficiently and the number of hard kilometres we put on our long term car was a testament to its durability.

But in our efficiency tests the Figo pulled another rabbit out of the hat and despite the superior power it also managed better efficiency numbers than the 1.1-litre, three cylinder Hyundai. City figures of 19.57kmpl and highway figures of 26.7kmpl means that it's clearly the winner in this segment.

The all-new Ford platform is lightweight but has sadly dialled out some of that delightful feel that the Figo was known for. A large part of that loss in feel is down to the new electronic steering. There is a good weighty feel to it and this does increase as speeds rise but it has lost a lot of the communication with the front wheels. It's a lot better than the Hyundai's though, which is just too light for me. 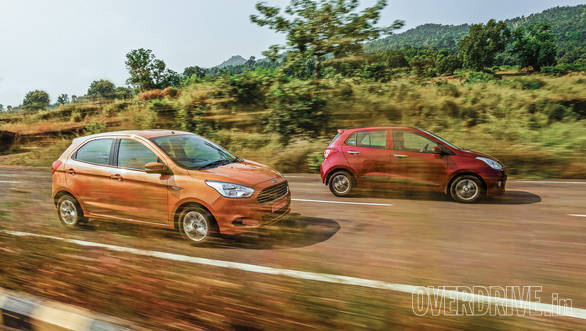 The Figo also goes around corners faster than the Hyundai and will a lot less roll though the Hyundai is more comfortable over bumps and potholes. One aspect that both the cars excel in is sound insulation and both cabins are very quiet places with no diesel drone and a lot of road and wind noise is effectively drowned out, making them both stress free on long drives. So both cars are very comfortable and ride reasonable well for family hatches but it's the slightly more agile Ford that I would pick out of the two. 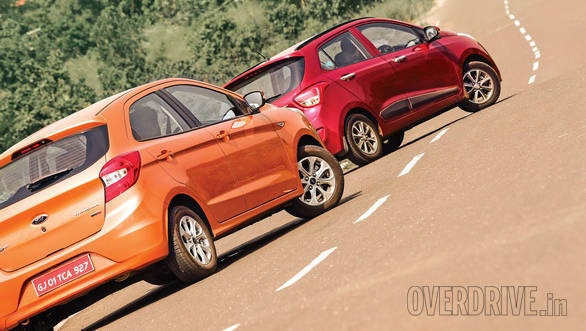 The Hyundai Grand i10 made a big splash in the market with its impressive list of features, efficient small diesel engine and fluidic looks. The Ford Figo somewhat manages to swim with the Hyundai in terms of its own features list and upmarket interiors but blows it away with its 1.5 TDCi engine. The big factor though is the price and the Figo in its top Titanium + trip is Rs 66,000 dearer on the showroom floor and you can expect that to swell to just over a lakh once taxes and insurance are added on. If you can overcome this hurdle then the Figo is the better car but the Hyundai still makes a case for itself as a great value proposition.

Ford Figo vs Hyundai Grand i10 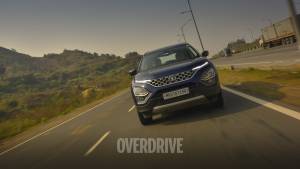