It's been barely even a month since the launch of the Ignis and there have been numerous queries about whether it's better or not than the other hatchbacks/SUVs/sedans in the market. However, the one question that was repeatedly put across to us was whether the Ignis is better than the refreshed Hyundai Grand i10. This is the one we're about to answer here.

There are no two ways about this. The Maruti Suzuki Ignis is the better-looking car here. The Japanese Kei car look is new to the Indian market. The unique-to-the-segment LED headlamps, the DRLs surrounding them, small grille as well as an overall rounded look make the Ignis stand out amongst traditionally designed cars. The alloy-wheel pattern as well as colour is also new to this segment. However, look at the car from the rear and you will notice the now-discontinued Ritz's influence, especially the flared wheel haunches. 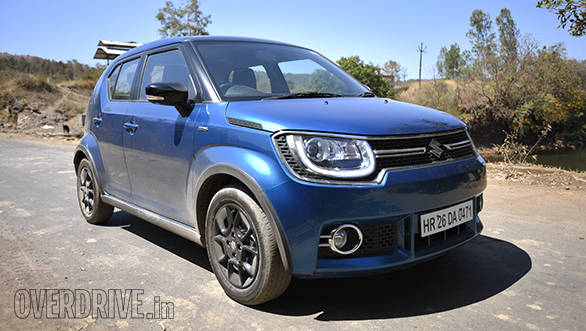 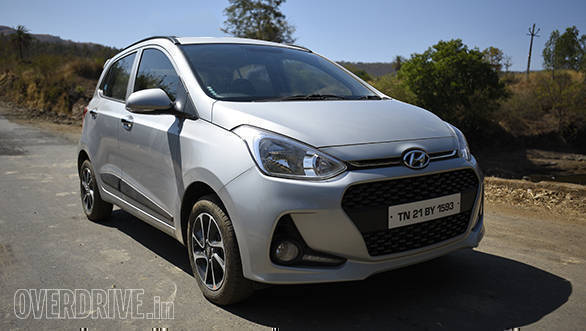 The Hyundai Grand i10 has been around for quite some time and is a regular on the Indian roads. The facelift has done precious little to change it, and you will be hard-pressed to know the changes. The facelift is minor and most people will barely know it. New details include a wider grille and fog lamps flanked by LED DRLs. The sides remain the same as before, and Hyundai continues to offer those good-looking diamond-cut alloys on the top trims. The one thing we noticed even during our road test was that the wheel arches of the Grand look like they can accommodate bigger wheels. At the rear, the bumper gets big round reflectors and the lamp design too has been slightly altered.

Just like the exterior, both the cars adopt a different theme to the interior. The Ignis continues with its funky theme  the new steering wheel with differently styled buttons, floating tablet infotainment system and exterior colour-coordinated grab handles as well as inserts. We loved the scroll-type AC panel with aircraft kind of toggle switches beneath it. The Maruti Ignis offers a 12V charging socket on the left side and the USB/Aux input on the right side, both covered. There is some space in the central console to stack the wallet and a phone. Behind the gear lever is a single cupholder, similar to other Maruti cars like the Celerio. The meter console is all-new and has a separate readout for the average fuel efficiency and other related data. The touchscreen tablet is new for a Maruti, but the interface is shared with other Marutis like the Ciaz and Baleno. This is also the first Maruti to get Android Auto to the existing Apple CarPlay mix in this screen. One thing we didn't understand is why did Maruti provide an info button on the steering wheel and another one on the dashboard to the right of the steering wheel when they both do the same function of giving out trip and efficiency data. 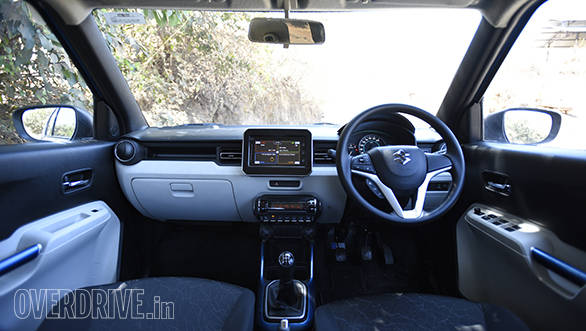 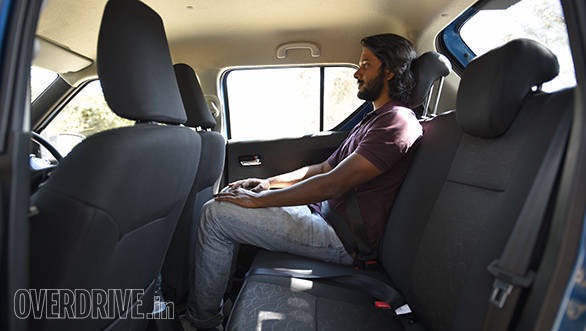 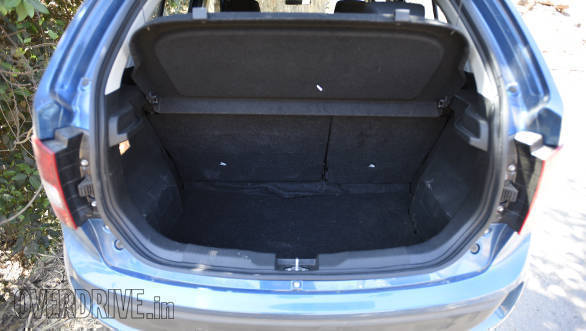 Space at the front is good for tall passengers with the seats holding you well; however, drivers with extra-large feet will have problems modulating the clutch. The clutch foot will get stuck between the top of the clutch and the bottom of the firewall during gear shift changes, in a similar fashion to the S-Cross. Kneeroom at the back is useable for tall passengers; however, it will be a squeeze for three grown-ups, slightly better than the Grand. The Maruti Suzuki Ignis is at best a 4-seater with space in the middle for a child. The boot space, at 260 litres, is just about adequate for two small suitcases. The 60:40 splitting rear seats though will help accommodate more luggage should the need arise. 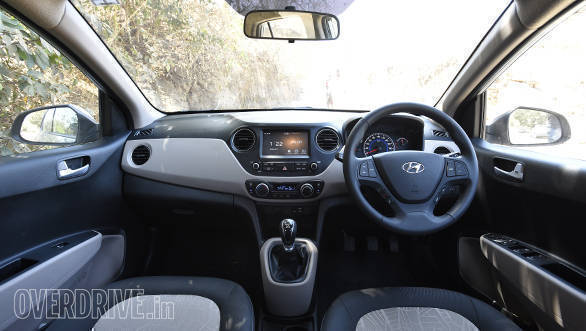 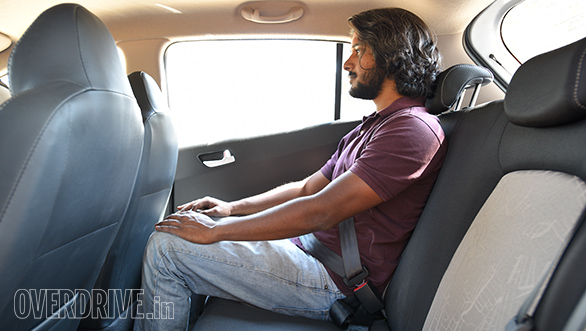 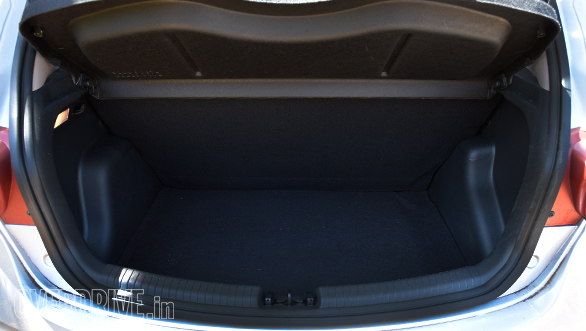 The Grand i10's familiarity is extended to the interior as well. There are soft-touch plastics and a mix of beige and black upholstery. With the update, Hyundai has made a 7-inch touchscreen infotainment system a part of the package. There, however, aren't auto-locking doors, something which Hyundai should have added as part of the update. Shoulder room is better in the Ignis compared to the Grand. The Hyundai though pips the Maruti with a better headroom and kneeroom. 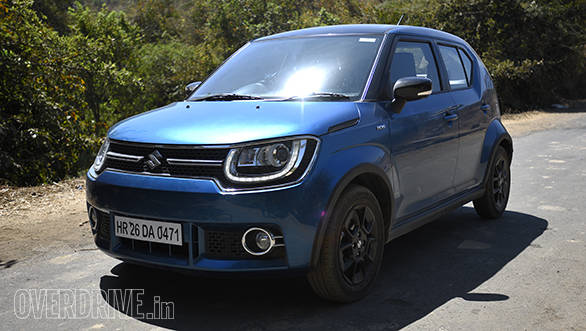 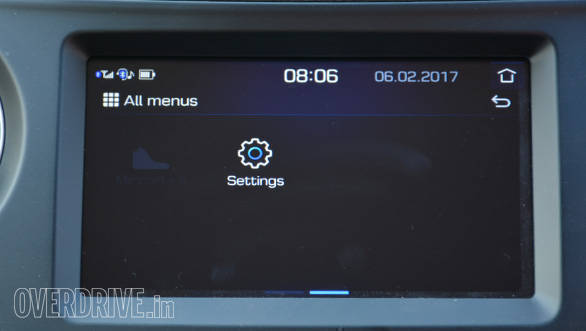 The infotainment system in the Hyundai goes one up on the Ignis by offering MirrorLink as well as Android Auto and CarPlay. However, there is no navigation system available, unlike the Ignis. There is automatic air conditioning, an auto-dimming IRVM as well as outside mirrors that fold or unfold when the vehicle is locked or unlocked. This aside, there is a cooled glovebox, plenty of storage ahead of the gearlever and on the transmission tunnel. Hyundai also gives a rear AC vent and a 12v socket to go along with it.

Both the cars are evenly matched when it comes to features; however, the Ignis offers LED headlamps, dual-tone colours, lots of customisation options and speed-sensitive door locks. This is apart from the features mentioned in the looks and interior sections. Both the cars miss out on height-adjustable seat belts though. 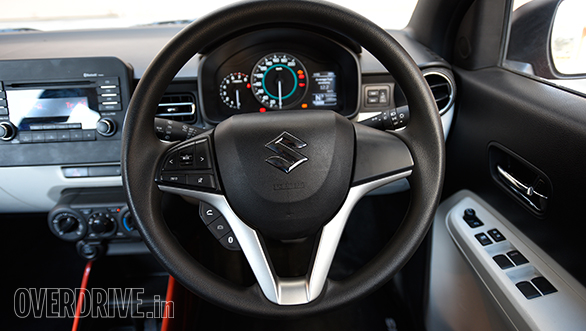 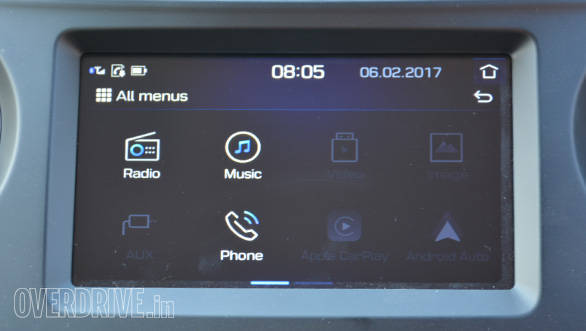 Apple CarPlay, Android Auto and MirrorLink are now available on the Grand i10 Asta trims

Maruti has taken the right step by offering every Ignis variant with ABS and dual airbags as standard. So whichever trim you buy, you don't compromise on the safety aspect. Hyundai, in the meanwhile, offers a driver airbag as standard with a passenger airbag being available from the Sportz trim upwards. ABS though is available only in the top-spec Asta trim and that's a pity. Both the cars offer rear parking sensors as well as a camera on the top trims.

The Ignis is set up a bit on the firmer side. At both high as well as low speeds, the car lets you know the kind of road you're travelling on. This firm ride quality may be the reason why the dashboard in our test car was rattling at a few places. The ride quality, however, isn't bone-jarringly bad; it is just stiff, much like the Baleno. The handling, however, benefits from this and if you ditch the mileage-oriented Ecopia tyres for some sticky rubber, the Ignis will be a very fun car to drive. Even so, the Ignis is rewarding and will plant a grin on your face in every corner. The steering is too light and we will have liked it to have some more weight. The lightness though makes it easy to use in city traffic. NVH levels inside the cabin are acceptable and as you will expect, the diesel is a tad noisier than the petrol. 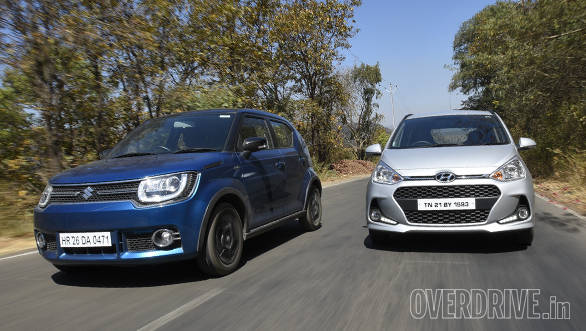 The Hyundai Grand i10 has been set up on the softer side. This means the ride quality even with a full complement of passengers is supple, and it irons out potholes much better than the Ignis. The Grand's new 3-cylinder motor is even smoother now and apart from the occasional thrum at idle, there is no NVH filtering into the cabin. The handling is predictable but without the same fun as the Ignis.

There is a hint of body roll when you push the car around corners. The steering is quite precise and light at parking speeds but weights up nicely on the highway. Most new Hyundais these days have a wooden feel to the brakes, but the Grand i10's units are definitely an improvement in this regard. Nevertheless, the Maruti has a better feel at the brakes and performance is also better as is evident from the numbers. The Grand took 3.3s and 46.7 metres to come to a halt from 100kmph with the Ignis stopping in 3.1s and 43.5 metres. 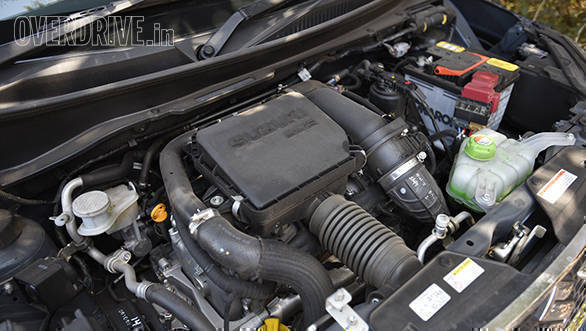 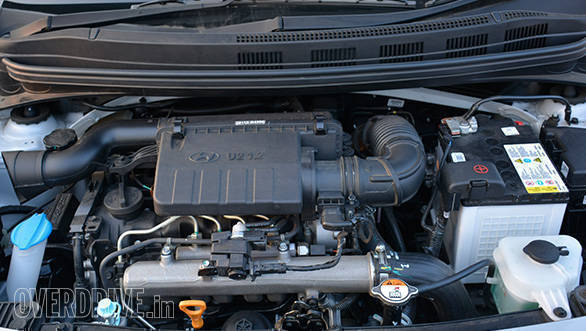 Maruti uses the tried-and-tested 1.3-litre Multijet engine which makes 75PS/190Nm. You can order your Ignis with a 5-speed manual or an AMT. In our 0-100kmph run, the Ignis diesel managed 13.5s. In contrast, the new 75PS/190Nm 1.2-litre 3-cylinder unit in the Grand took 14.1s to reach 100kmph. However, the Hyundai managed better roll-on figures that is doing 20-80kmph in third gear in 10.4s, nearly a second quicker than the Ignis. It also nudges ahead for the 80-120kmph run in fourth gear by 0.1s over the Ignis' 10.8s. Both the cars will do an easy 150kmph beyond which progress is laborious.

That said, the Grand's engine is much smoother at all points in the rev range while the Suzuki is louder but happier to rev. Hyundai has also reduced the clutch effort in the Grand i10, making it a much easier pedal to modulate. Both the cars offer slick shifting gearboxes, but as the roll-on figures show, the Grand i10 is more driveable and this holds true even at lower speeds, with the Suzuki requiring more gearshifts in heavy traffic. Overall, we prefer the drivetrain in the Hyundai. To top it off, the Grand is also a wee bit more fuel-efficient (16.34kmpl in the city and 26.63kmpl on the highway compared to 16.02kmpl/25.9kmpl of the Ignis respectively).

The Ignis is a good buy thanks to the standard safety kit on offer. It also has a lot of character and if you are driving enthusiast, you might love what the Ignis offers as a package. That with Nexa, you also get a free pickup and drop for your vehicle during service, is an added bonus. 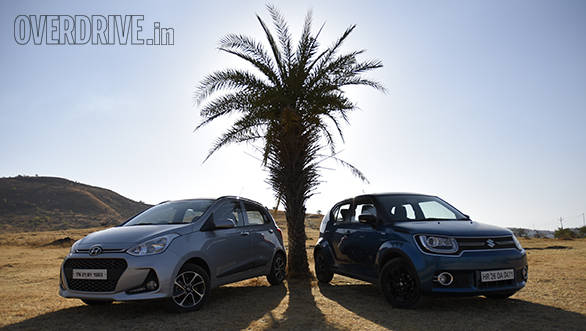 The Hyundai Grand i10, on the other hand, ticks all the right boxes for the calculating buyer - it's got a more acceptable, sober design and has fit and finish similar to more premium cars higher up the Korean manufacturer's range. The refinement levels too are leaps and bounds beyond what this class has to offer. This is before you factor in the more fuel-efficient nature of the engine, its driveability and the fact that it is more comfortable to sit in than the Ignis. At Rs 8.75 lakh on-road Mumbai, that the Grand i10 is also more affordable than the Ignis (Rs 9.56 lakh), seals the deal in favour of the Hyundai. 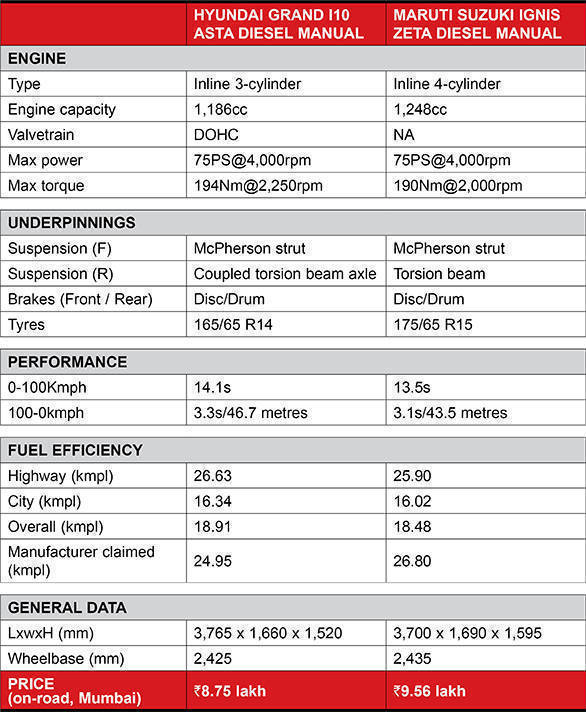 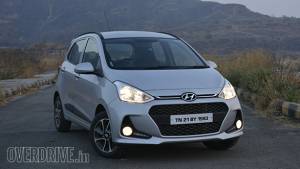 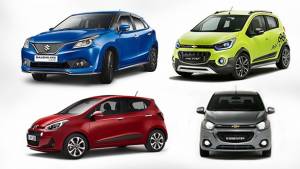 Hatchbacks to be launched in India in 2017 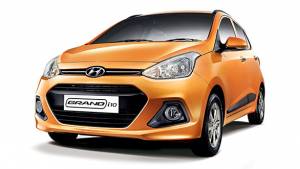 Hyundai Grand i10 and Xcent available with...
Advertisement