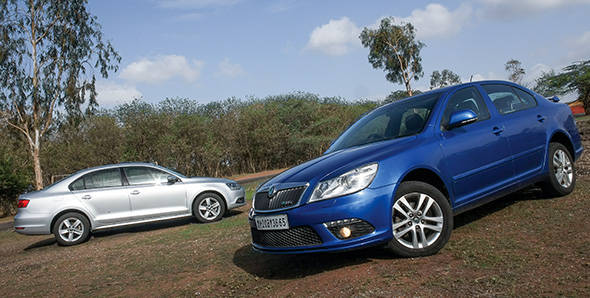 Turbocharged Stratified Injection. Or in short TSI is one of the few three letter abbreviations that get the auto-enthusiast's blood pumping. The name became a by word for 'brilliant to drive' when Skoda brought out the Laura TSI in 2009. It instantly blew its competition into oblivion in terms of performance and nothing has come close since. But that was also down to the fact that save for its bigger and heavier sibling, the Superb, no other VW group car has featured a TSI petrol. Three years on, the new Jetta TSI changes all of that.

At first glance you might be at a loss when it comes to identifying the Jetta TSI. That's because it's identical to its diesel sibling except for a different badge on the boot. It doesn't help matters that the Jetta itself is very reminiscent of its smaller sibling the Vento. Nevertheless the Jetta is a simple and subtle design that still manages to ooze sophistication. Splashes of chrome around the front grille and air dam help spruce up the otherwise very Vento/Poloesque front end. The headlamp units house day time running lamps but they're halogen bulbs and not the LEDs. I know quite a few people who are miffed with that. The side continues with the simple design featuring a defining shoulder line and perfectly flared wheel arches. The rear is the most distinguishable angle on the car and helps the Jetta stand out from its VW brethren. The interiors are finished in classy beige with a hint of chrome here and there. It's a well executed design and the back seat is spacious and comfortable, if only for two people thanks to the intrusive transmission tunnel.

The Laura on the other hand, especially in vRS trim is a lot more shouty. Its chunky design with the typical Skoda kink running down the bonnet into the badge on the grille. The pulled back headlamps look smart but I think I prefer the front end on the old Laura. A rather featureless, slab-like side converges into a high set but muscular rear. With the vRS edition Skoda have slapped on a new set of wheels and a honeycomb air dam. You also get smart looking LED daytime running lamps in the bumper. The rear end gets a smart looking spoiler and exhaust tip. There are no bumper extensions of any sort and the vRS has very practical but slightly ungainly looking high ground clearance. The insides are primarily black with very supportive alcantara and leather wrapped sports seats. Skoda gives you a sports steering wheel but the lack of steering mounted audio controls is a major oversight.

I remember the first time I drove the Jetta TDI manual on a proper mountain road. I fell in love with it and all I could think of was how great it would be if VW dropped a tasty TSI motor in the engine bay. Word then got out that VW was working on exactly that and we couldn't wait for the result. VW gave us a TSI Jetta alright but it wasn't quite what we had in mind. The 1.4TSI engine we get doesn't have a supercharger/turbocharger combo we were expecting but uses just a turbo. The result is a tame sounding 122PS produced at 5000rpm. Helping things along however is a welcome 200Nm for torque that peaks at 1500rpm and lasts till 4000. The engine is quite tractable and has an appreciably strong mid range.

However it's not excitingly quick. The car hits a hundred clicks in 11.1 seconds and goes on to 196kmph. It is however, quite efficient doing 9.9kmpl in the city while it stretches that figure out to 19.6kmpl on the highway. The engine however has the typical VW thrummy feel and isn't quite as refined as the larger 1.8TSI. In terms of ride and handling the petrol feels very similar to the diesel in that you have great ride quality despite a slightly stiff suspension set up. The Jetta feels stable and composed around corners and the steering is perfectly weighted. It's a comfortable car to drive and be driven in.

If ever an engine dominated the very identity of a car it would be the 1.8TSI in the Laura. The car is a good package on its own but the engine elevates it to the state of awesome. It's unlike the engine in the old Octavia RS. That motor had quite a lot of lag but once the turbo spooled up it was an explosion. It was thrilling and borderline violent but not very comfortable or practical at city speeds. When you first drive the TSI you expect a similar edgy feel but you'll find none of it. 250Nm of torque from 1500rpm to 4500 helps make this a delightfully driveable car in the city.

Let the revs climb beyond 1800rpm and you feel a purposeful surge build up. Stay on the pedal and all hell breaks loose post 3500rpm. But again the power delivery never spikes and builds in a strong but linear fashion. What's special about the engine is that the delivery is effortless and relentless. Third, fourth and even fifth, she pulls like a runaway freight train when you need it. No other car this side of Rs 20 lakh can reach 200kmph with such ease. Of course all this madness wallops the economy figures. We got just 7.8kmpl in the city and 14.5 on the highway. The vRS features slightly stiffened suspension and the difference is apparent.

The car now feels more focussed without losing too much ride comfort. It isn't as plush as the Jetta though. While both cars have great feeling gearboxes with short snappy throws I found that you have to be precise with the Laura on aggressive shifts or you could find the wrong gear. The steering on the Laura is also heavier but these are all small sacrifices that must be made for the sporty intentions.

In terms of equipment both cars do their best to one up the other. The Laura gives you rear parking sensors while the Jetta has sensors at the front as well. What I didn't like about the Jetta's system is that the music volume isn't muted when you engage reverse. If you've got your tunes playing too loud you won't be able to hear the beep assist. It goes on; the Jetta has hill hold but the Laura gets a sun roof. The Jetta gets auto headlamps but the Laura gives you xenon bulbs with corner assist as opposed to the Jetta's halogen units. The Laura scores one over with a well executed touchscreen colour display as against the Jetta's dated dot matrix style screen. Overall the Laura has the better feature list but the Jetta's interiors are still the nicer place to be.

The Jetta TSI then is a very sensible, comfortable and efficient car. It ticks all the boxes but one. Desirability. The Laura on the other hand stamps its authority all over said box. Save for losing badly to the Jetta in terms of fuel efficiency and perhaps losing out a bit in ride quality and overall comfort the Laura has the Jetta properly trounced. It's far more fun to drive, is well kitted out, has a smooth and refined engine and at Rs 15 lakh and some change is only twelve thousand more than the Jetta. But most importantly it's a car you will love to bits and it wins this test on that merit alone.