Marriage changes you! Trust me, it did this to me. While earlier I was all for supersport motorcycles and 2-door sportscars for long, these have sadly changed now. I enjoy riding my 11-year-old Pulsar and my plans of buying the Mini JCW too have been put on a back burner. Post marriage, it's all about thinking for the future. So when the time has come to buy a new hatchback for the family, the choices were narrowed down to only the Celerio AMT and the newly launched Tiago. If you were about to ask 'why', you clearly haven't read the first line of the story. The wife is a beginner driver and having an automatic car makes sense. Since I usually have office long-term or test cars at my disposal, a petrol vehicle at home is just perfect for those short trips to the supermarket. Apart from the Alto K10 AMT (too small for a 6-footer) and Wagon R AMT (we already had a Wagon R before), there are no other 'affordable' automatic cars available. So the choice obviously have been narrowed down to these two. Let's see how I arrive at my purchase decision. The looks play an important part and there is no doubt here that the Tiago is one handsome car. Tata has been bang on with their new 'Impact Design' technology. The front profile has smooth flowing lines and that black grille integrates well with the overall design. Tata designers have added a front spoiler for an aerodynamic design angle to the car. Similar impact is created with the side and rear profile too. 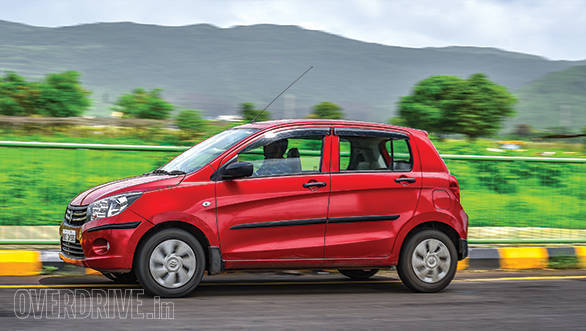 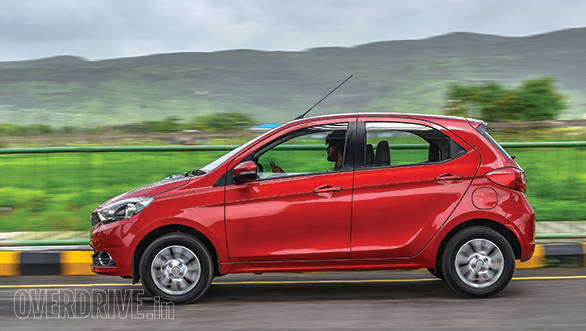 No doubt here that the Tiago is one handsome car

While it was a smart-looking car in 2014, the Celerio's design has become a bit long in the tooth now. The grill and large airdam look inoffensive and you're immediately reminded that this is the European-spec Alto after all. The rear makes the car seem like it is on its haunches. Overall then, it is the Tiago that wins the beauty contest rounds. 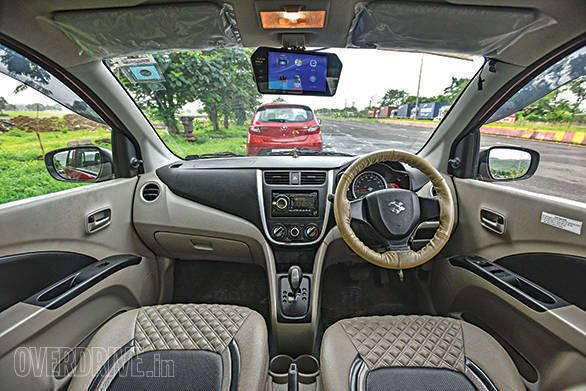 We borrowed the Celerio from a friend and hence the steering cover and the rear-view camera display. The interior layout is smartly executed but has started to feel dated 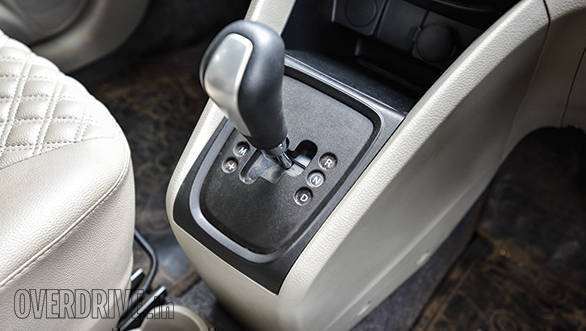 As much as the looks matter, the cabin space is all too important. The Tiago at the outset looks more spacious; however, as they say, don't judge a book by its cover. Post measuring the cars, we found that the Celerio is in fact more spacious of the two, save for the shoulder room at the rear where the Tiago scores better. The Celerio's driver seat too does have a bit more of travel than the Tiago, making it a little more bearable for taller drivers like me. 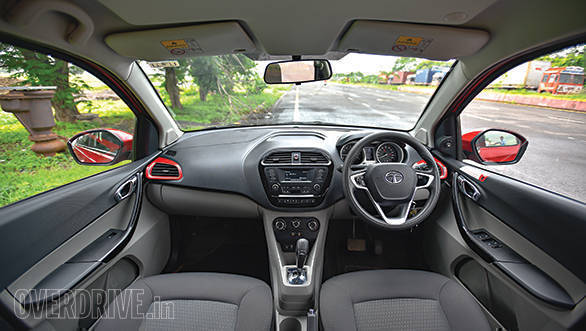 The premium theme of the Tiago is carried forward in the way the cabin is laid out. The red inserts don't feel gaudy 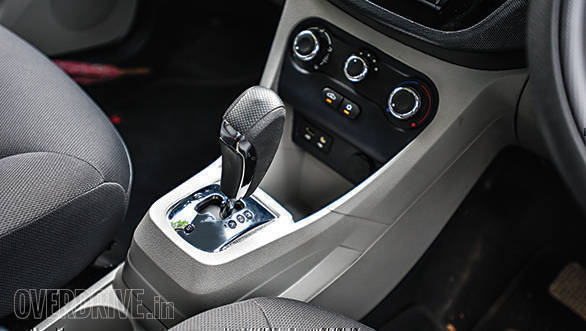 The Tiago's gear lever feels a tad more premium than the Celerio's unit. In addition to the manual mode, the Tiago's box also offers a Sport mode that holds onto the revs

Now on to the features. The Tiago has that fantastic music system coupled to the light coloured upholstery. However, the Celerio claws back lost ground with a better headlamp throw. The Tata though boasts follow me home headlights. Both the cars though will not hold 1-litre water bottles in the front pocket holders. Electrically adjustable mirrors are common to the top-end trims; however, they still have to be manually closed. Boot space though is marginally better in the Tiago by seven litres as opposed to the 235 litres that the Celerio's trunk offers.

The Tiago has a bigger 85PS 1.2-litre 3-pot engine when compared to the Celerio's 3-cylinder 68PS/90Nm 1.0-litre motor. The Tata makes its power and torque numbers at the same rpm as the Celerio (6,000/3,500), but the way both the transmissions transfer power to the front wheels is different. The Tiago AMT feels a tad more jerky on the move, especially during standing starts. This makes it a tad tiring to drive in the city considering you have to modulate the throttle and brake far more than you need to. In contrast, the Celerio AMT software has been updated over the years and it has almost become seamless. In fact, when you keep your foot on the pedal, the gearbox holds on to the gear till the redline before upshifting. Even at slow speeds, with the rpm needle hovering at 3,500rpm, lifting the foot off the accelerator pedal results in an upshift. You quickly fall into a rhythm with the Celerio AMT. She will sit at 60kmph in top gear and drop a gear if you demand immediate acceleration.

With the Tata, things look up when you press the tiny Sport button. The throttle becomes more sensitive to inputs and the car moves ahead with a newfound gusto. However, on the highway, the transmission truly shines and it makes easy work of overtaking manoeuvres. The Celerio AMT too isn't behind in this aspect, but the power deficit compared to the Tiago means the motor has to work harder. All said and done, the Celerio's motor sounds a tad more refined than the Tata's engine and is more eager to rev. The Tata motor is also more vibey at idle, sending the vibrations through the door pads, steering wheel and the pedals.

If performance numbers are to be considered, the much heavier (1,080kg) and powerful Tiago recorded a better 0-100kmph time of 16.8s compared with the 17.1s taken by the Celerio (830kg). However, the Maruti recorded an almost 10kmph higher speed at 152kmph than the Tiago's 143kmph. In the efficiency department, the relatively quick to upshift Celerio AMT delivered an overall efficiency of 17kmpl compared to the 15.8kmpl of the Tiago AMT.

The Celerio is set up on the stiffer side. This is apparent the moment you go through a pothole. It is not bone-jarring stiff, but nonetheless you know that the car is going over a pothole at low speeds, be it big or small. In the meanwhile, at higher speeds, she absorbs the road imperfections quite well. This stiffness helps her with the handling department. The Celerio holds her line well and the steering stays heavy all the time. This heavy steering feel is similar to most of the new-age Maruti offerings below the `6 lakh mark. The Tiago's steering, in the meanwhile, is light in the city but weighs up decently on the highway. Being set up on the softer side of the two means ruts on the open highway will cause some sideways body movement. The ride quality though is way better than the Celerio's at all speeds.

Both the cars have a small amount of NVH creeping into the cabin at higher speeds. The fat A-pillar of the Tiago though is a hindrance in traffic while being a tallboy design means the Celerio gives better all-around visibility.

While the Celerio model that we tested here was a 2015 VXi borrowed from a friend, Maruti in recent times has also introduced the ZXi AMT (O). This model comes with dual airbags as well as ABS. The Tiago AMT is available only in the top-spec XZA trim. 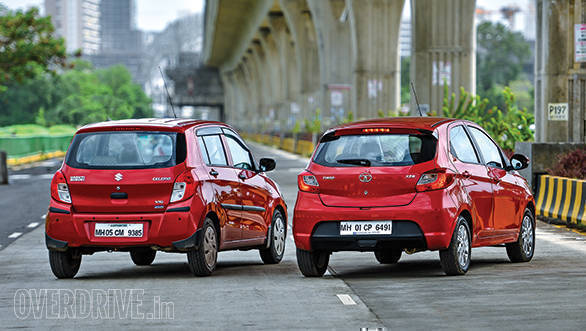 The last time these two locked horns, it was the Tiago that came out on top. But those were the diesels. The petrol automatics, in the meanwhile, are a different ball game altogether. The Tata Tiago looks good, feels more spacious and is the newer car of the two. It has a pretty efficient engine and decent dynamics too. At Rs 6.16 lakh (on-road, Mumbai), it is priced decently for a top-spec automatic gearbox hatchback.

The Celerio, on the other hand, has a lot of negatives against it including the age of the car, lower power output and slightly less features compared to the Tata. But the Maruti, as time has proved and with our experiences of owning both the brands, is the more reliable of the two. It is easier to drive, is more fuel-efficient and shares its parts with other Marutis which makes it easier to source the goods when required. It also does help that the Maruti overall is more comfortable than the Tata and is also almost Rs 20,000 cheaper. An update from Maruti to the Celerio is unlikely this year, and dealers currently are offering discounts of up to Rs 20,000. Seals the deal then. Mind over the heart, well marriage changes 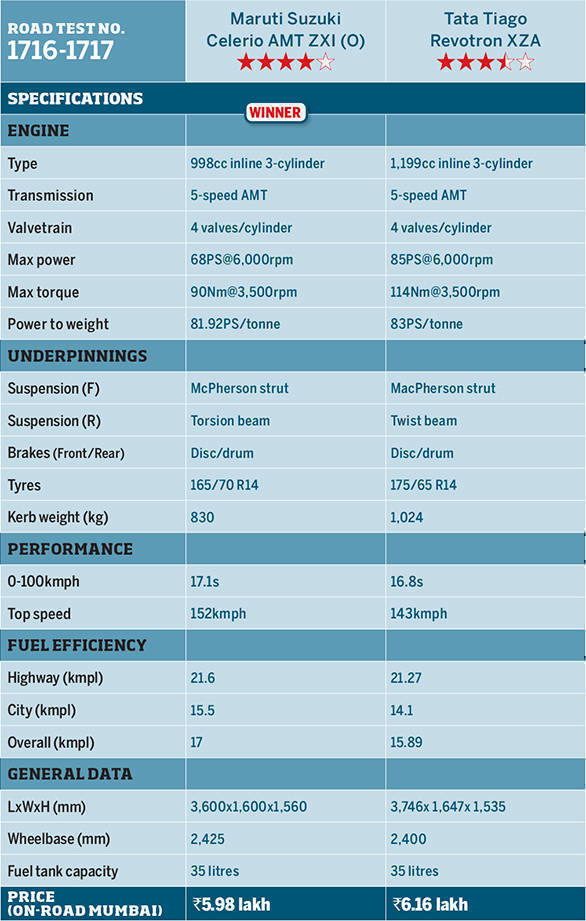 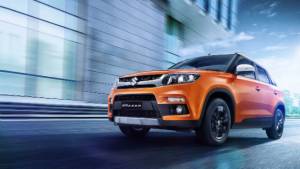 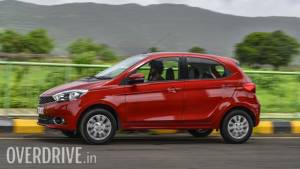 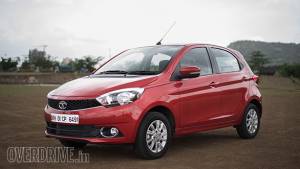