Six months ago, Tata Motors was in the throes of a crisis. Its entire product line-up was taking them nowhere. From the Indica to the Safari, customers lacked interest in anything Tata Motors had to offer. Outdated, unreliable and dull, a major revamp was the need of the hour. Enter the Zest, a new Tata Motors sedan that stepped into the market to rave reviews. From nothing to something, the Zest drew everyone's attention to it. 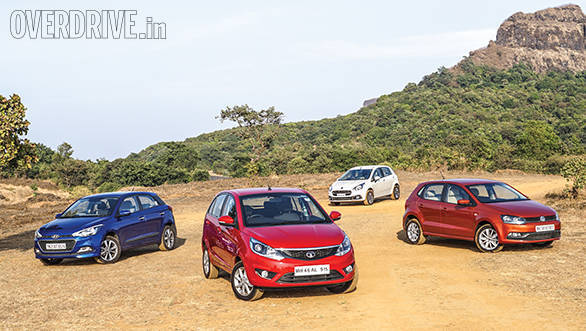 In one stroke, Tata Motors proved it was capable of making a contemporary product in the same league as its peers in the segment. The Zest wasn't, however, a one shot attempt - the platform also made provision for a hatchback which is the car under scrutiny in this comparison. The Bolt thus aims to emulate the feat that the Zest achieved, but is it as capable? The competition is tough and well established but the Bolt would like to fit in. Can it stand up to the Hyundai Elite i20, the Fiat Punto and the Volkswagen Polo? Here is what we discovered. 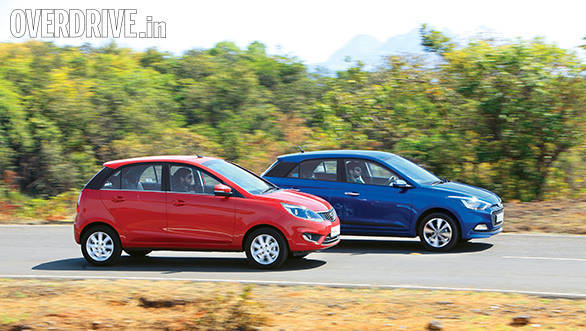 As we've said before, if it wasn't for the badge, you wouldn't guess this is a descendent of the Indica Vista. In silhouette, there is some family resemblance but in the flesh, the Bolt does look fresh and attractive with great lines and accents running through the shoulder line and bonnet. The car also appears very tall and though this aids ground clearance, aesthetically it detracts from the visual appeal. 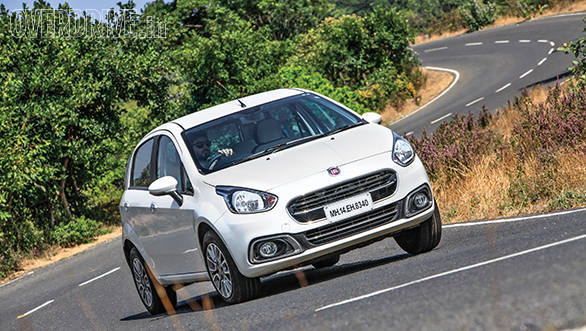 The facelift that the Punto received last year was a much needed refresh and the new grille, redesigned headlamps and bumper did get a number of head turns on our drive. It can't quite stand up to the edgy, modern looks of the i20 but it's Italian and has flair and that's all that really matters.

The Polo also received a mild facelift last year with a new bumper and blacked out front headlamps. Though this has done little to change the looks of the car, the Polo still remains a fairly decent looking hatchback. 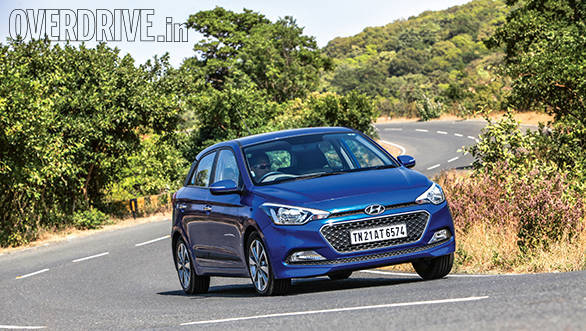 The i20 is the darling of the pack with the Storm-edge Design picking up where the already stunning Fluidic Design left off. It cuts a beautifully sporty silhouette and no matter which angle I look at it from, I can't find anything that I don't like. I won't beat around the bush. The i20 is hands down the winner in the looks department and leaves behind the other three cars squabbling for second place. The only downer is with the sheer number of them already on the streets - we may see this look ageing very quickly. 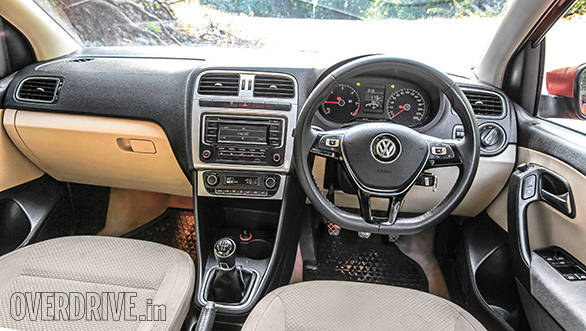 The Polo dash is smart but traditional in layout and feel 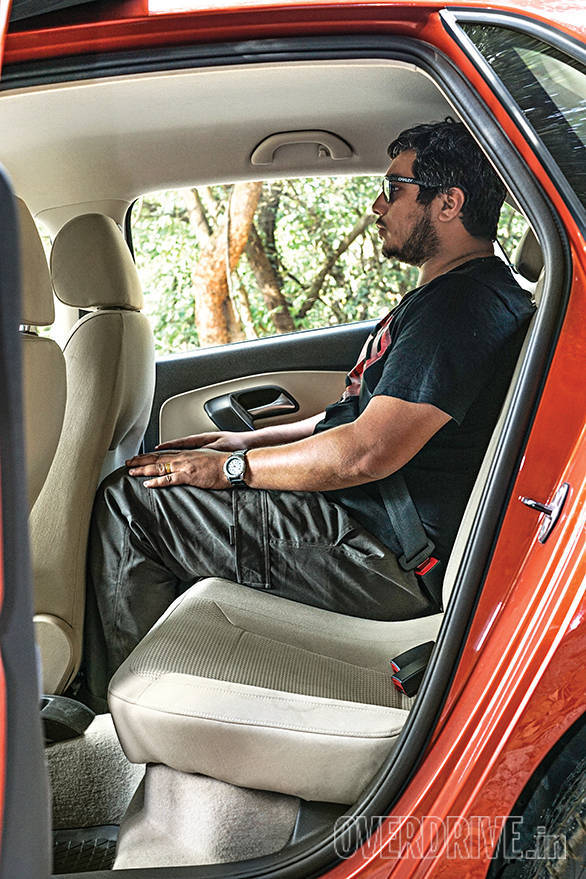 Second row in the Volkswagen is still cramped 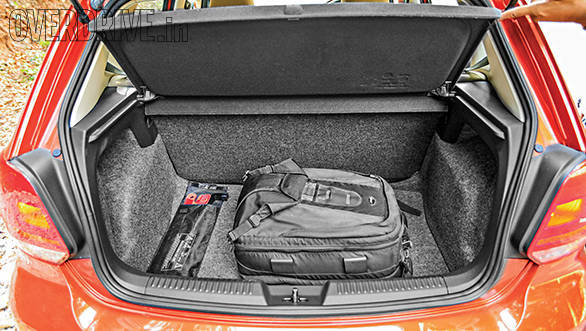 Each of these cars sport a different flavour to their interiors and you would be happy living with either of them. They do differ in some details though and one of them is space utilisation. The Polo's space is managed around the front two seats with the second row receiving little attention. It fits the European idea of a compact car built to fit two adults and two kids perfectly, but I felt quite cramped in the rear. The layout of the dash is functional and elegant but not quite as eye catching as the other offerings in this comparison. There are also a lot of cubbyholes and spaces to carry bottles for a long drive. 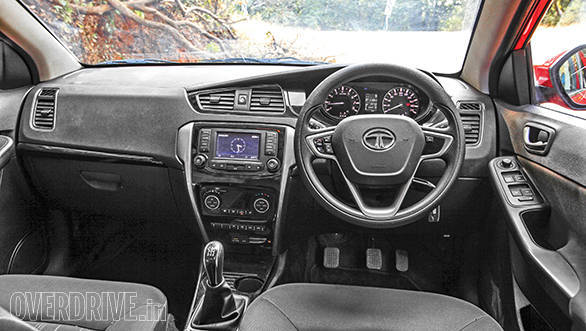 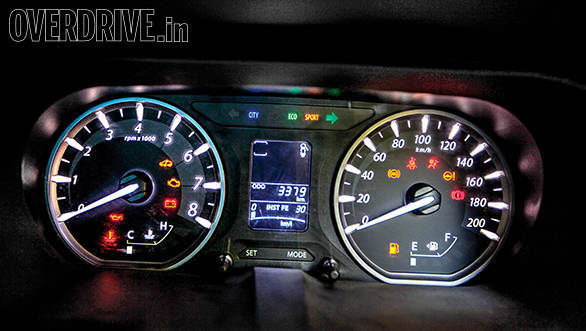 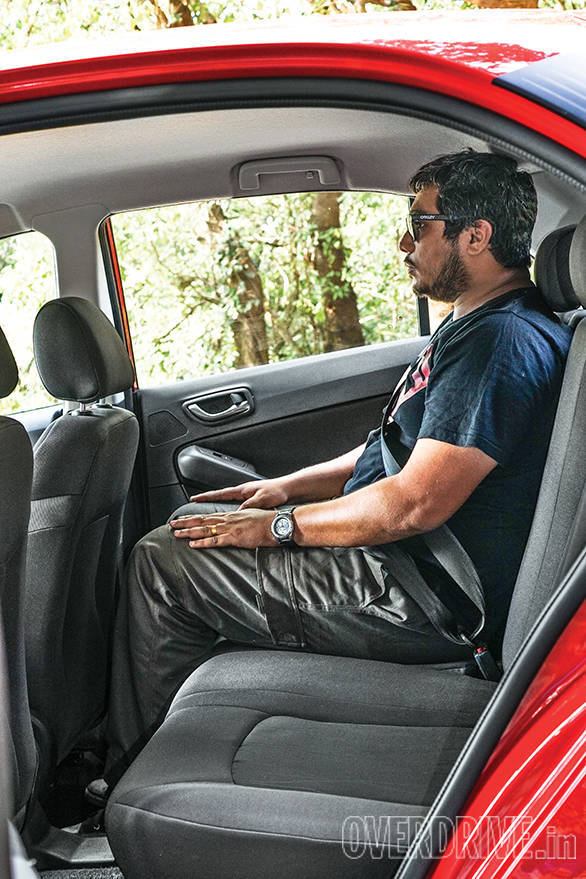 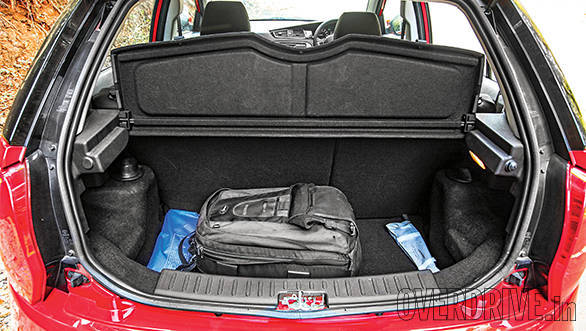 . . . but small boot in the Bolt is inadequate on longer drives

If you need proper people space, then the Bolt swings in the opposite direction, offering sedan like knee-room for passengers but it achieves this by sacrificing boot space and at 210 litres, it's the smallest boot in this company with each of the other cars offering over 280 litres. Places for bottles and knick-knacks will also be missed on the Bolt which has very small side pockets in the doors and one solitary cup holder in front of the gear lever. The interiors on the other hand are a big improvement for Tata and don't look out of place in this company. The standout feature has to be the brilliant Harman infotainment system which is easy to use and has brilliant audio quality. Audiophiles listen up, this is one of the best sounding car systems at this test, and within a number of higher price points as well. 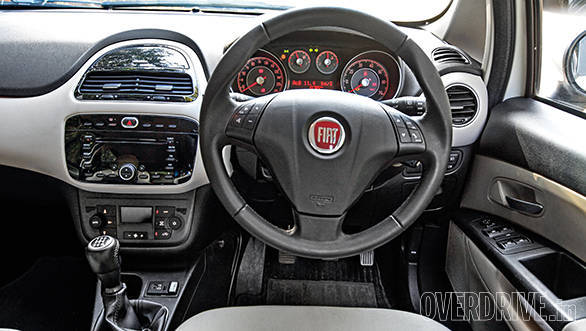 The Punto Evo dash is dated and materials feel so last generation. It's got Bluetooth connectivity but the Blue&Me multimedia system needs a hard rethink 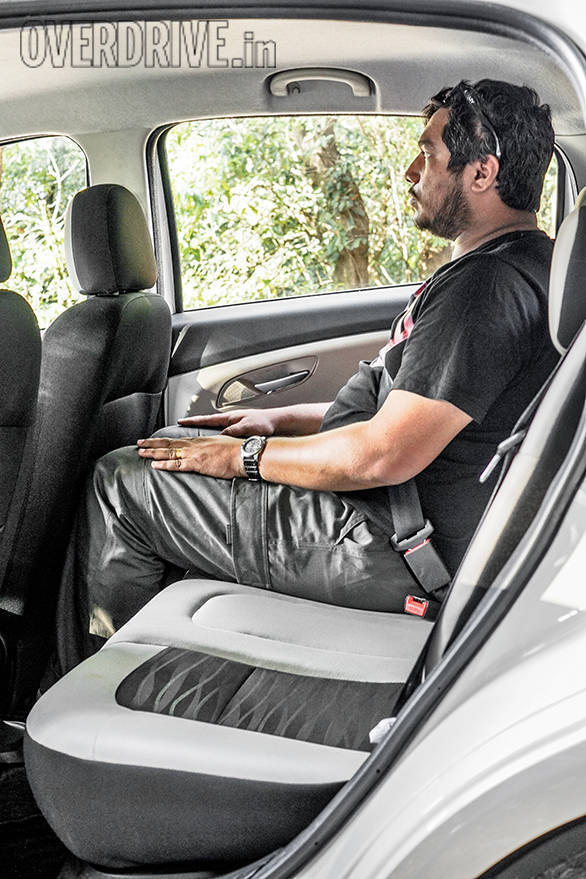 Lots of space in the second row in the Punto Evo 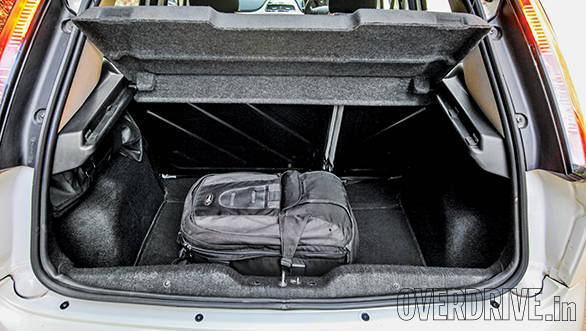 The Punto Evo takes a more balanced approach to people space with good rear knee-room. But while it seats four comfortably, I found the driver's seat too soft and not supportive enough. Also no matter how much adjusting we did, neither of us could find a comfortable driving position. The last update also brought the European looking dash and while this funks up the interiors a bit, the functionality of the systems is not quite as simple. Connecting your phone requires you to toggle though a complex menu and takes quite a bit of time and you can't play music from your phone's playlist either. 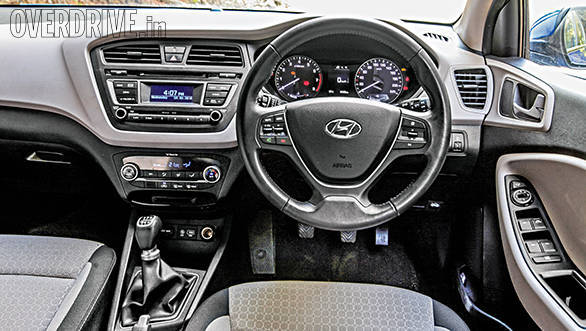 Well laid out dash is highly intuitive to use. The infotainment system is also one of the easiest to operate 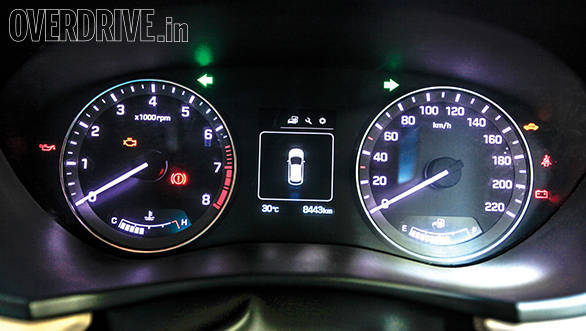 Clocks miss out on an average fuel consumption calculator 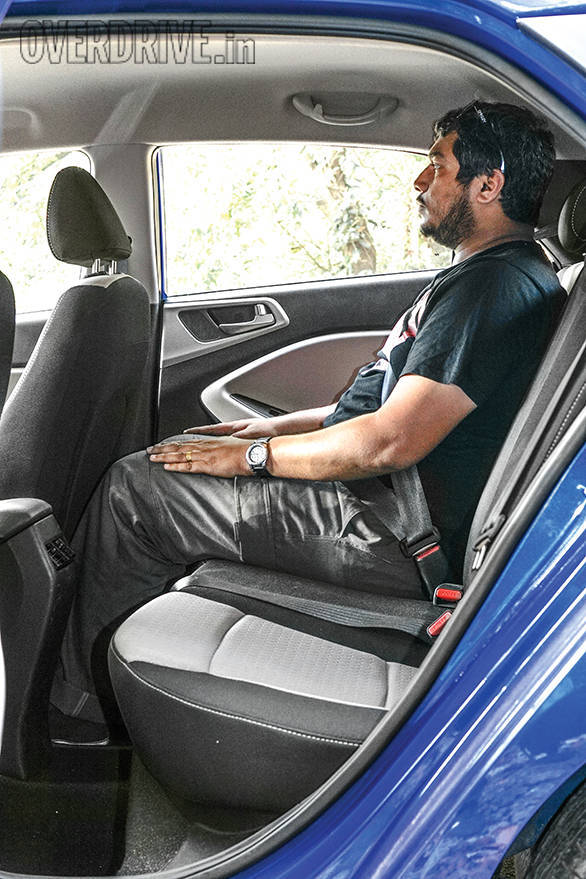 Knee-room in the second row is good 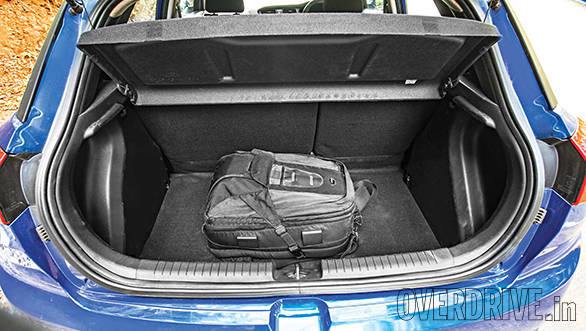 At 285 litres, the Hyundai has the largest boot of the lot

Something that we really love in the Elite i20 is the infotainment system that is very simple to use. It also mirrors the balanced space utilisation like the Punto but has a lot more storage space all around. Its steering can be adjusted for height and reach as well and it's the easiest to find a comfortable driving position in. Dual air-bags, ABS and climate control are common features in all four cars, but the i20 has the longest list that includes rain sensing wipers and automatic headlamps and this makes it the nicest car to live with on a daily basis.

The slowest of the engines resides in the Polo. The 1.2-litre is also the only three cylinder engine in the mix. At 74PS, it's the least powerful and while there is a little low down poke, it's the least enjoyable to drive. 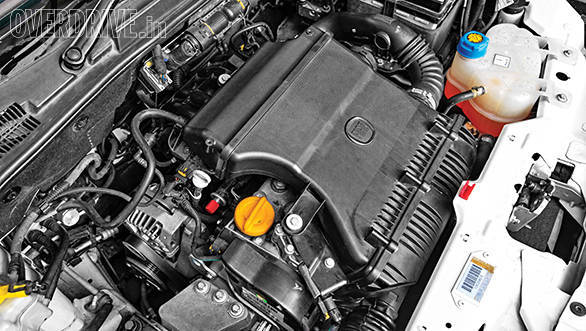 The Fiat 1.4-litre FIRE (Fully Integrated Robotised Engine) in the Punto Evo makes 89PS and is better refined but really needs to be revved for its true performance to show through. 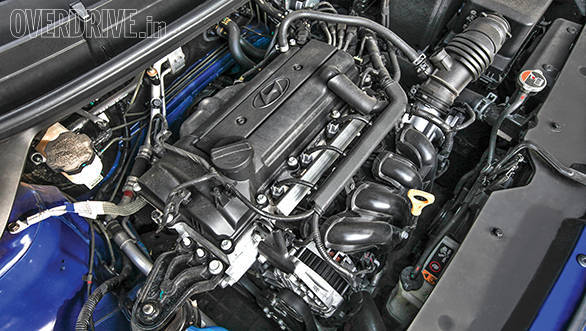 The Elite i20's 1.2-litre engine is the most refined mill here but similar to the Fiat, it too needs to be revved out quite a bit before things get exciting. Both the Punto and the Hyundai engine have been tuned for efficiency and have long ratios and poor throttle response. So when pottering around town, they are not the most inspiring. 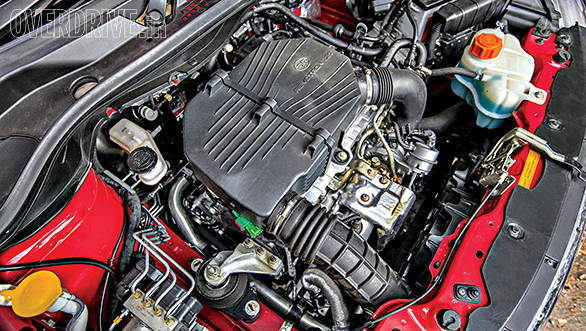 The Bolt's Revotron turbocharged engine is surprisingly the most pleasing to drive and really shows us why forced inductions and small displacements are becoming popular. Surprisingly, it's the turbocharged engine that feels the most responsive while the naturally aspirated engines have lost their typical responsiveness. The Revotron engine also features three drive modes - Sport, City and Eco. These modes are quite a bit of fun to play with and really do change the characteristics of the power delivery and it ends up being the most likeable engine of the three. Where the rest gain back some ground is in the mileage figures. The Elite i20 and the Punto both return over 15kmpl while the Bolt and the Polo are less efficient at around the 14kmpl mark. With such a small difference, the Bolt still wins this round.

All the cars on this test have fairly stiff setups that handle really well and at the same time have reasonable ride quality to match. The Punto is the softest of the bunch with very good ride quality and thankfully, this is not at the cost of handling. The car is fun through corners with lots of grip albeit with some body roll. The Hyundai is a great improvement on its predecessor. It's now much more pleasing to drive and has lost most of the roll and bounce through corners and quick direction changes. This has been at the expense of some ride quality though and the firm setup feels fine in the front but does get a little bouncy for the rear passengers. I have to say that the Bolt surprised us with a tight chassis and very little body roll around corners. That said (and despite the stats saying that the Bolt has the lowest ground clearance at 165mm), it does feel like it's carrying its weight higher up and will reach the limits of its grip earlier than the best handler of the bunch. Also, the steering is very light at city speeds and then weighs up quite a bit at speed and while that is a good thing, the difference is stark. I'm sure it's something you could get used to but over the few days we drove the car, the transition still felt a little unnatural compared to the rest.

The Polo is the handler in this company with great manners in corners and with a nice feel from the new revised electronic steering. It's also has the best balance between ride and handling and the driving experience is only let down by the poor engine. 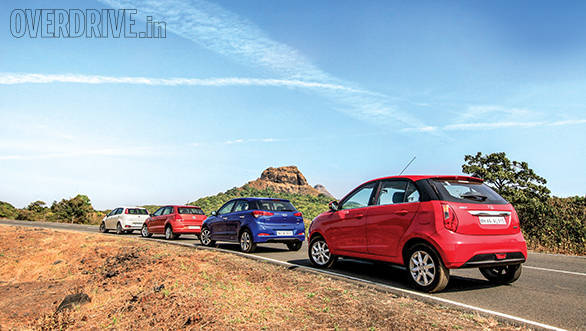 With the Polo, the problem is the engine. It really does detract that much from the driving experience and the diesel engine in the same car really makes it a very different experience. The Punto Evo on the other hand is a decade old design and its age shows. The interior has been refreshed but it still doesn't quite match the Tata or the Hyundai in features and overall execution. It's also the most expensive car in this test and in this company, it's hard to justify that premium just for the badge. The Bolt is a huge leap forward for Tata Motors. It's a great package with an exciting engine and is packed with useful features. It offers excellent value for money and is the least expensive on this test. It only just loses out to the Elite i20 which has better space utilisation, a sensible boot and larger feature set. It's no surprise that our Car Of The Year  wins this test, but it is surprising that the Bolt managed to run it so close.