For a company that has played such a pivotal role in the automotive revolution, General Motors has had a rough ride in India over the last few years. The product lineup, despite being quite vast, hasn't really set the sales charts on fire. Even the joint-venture with Chinese SAIC that led to the introduction of the Sail hatch/sedan siblings and the Enjoy didn't do much for GM's fortunes. 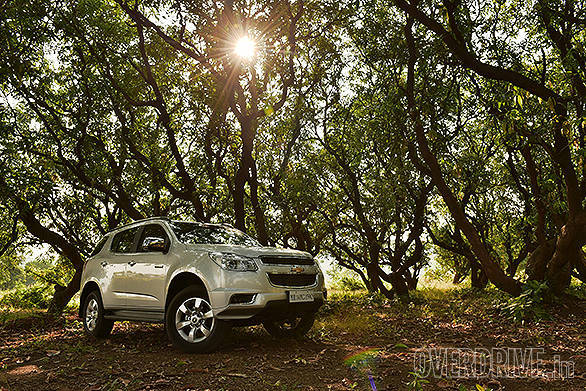 Cut to the present and the American carmaker has introduced an all-new SUV in India in an effort to revive sales. It is none other than the popular Trailblazer  a true Chevrolet in every sense of the word and the first of the ten new models planned for India over the next five years. Does the SUV have what it takes to turn Chevrolet's fortunes around in India? Look at the Trailblazer from any angle and you know it's a huge SUV. The imposing presence is further highlighted thanks to the overall height. It stands more than 6 feet tall and one has to literally climb into the vehicle. The face is typical Chevrolet thanks to the signature front split grille. It's a smart face but could have looked more aggressive considering the vehicle's butch character. The sides feature no highlights and are rather plain, the fenders are flared but receive no cladding.Move to the rear and the tailgate is almost flat. The window and the tail lamps wraparound, adding some style to the back. 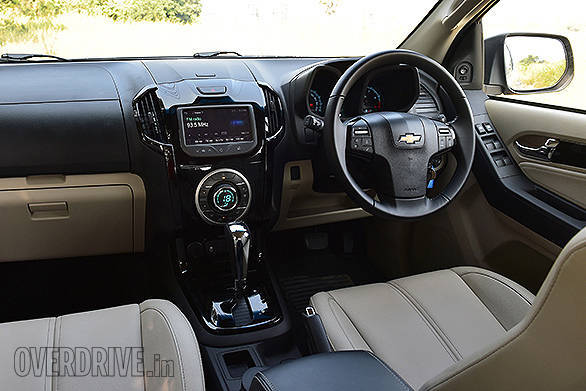 Interior styling won't make you go wow but merges well with the overall theme. The three-spoke steering is good to grip and sized well. It also features various controls that are within reach and feel made to last. While the interior sticks to a dual-tone combination, the centre console is finished in gloss black. The climate control switches form a circle that in our opinion looks out of place. The dash also offers various storage points and a split glovebox. 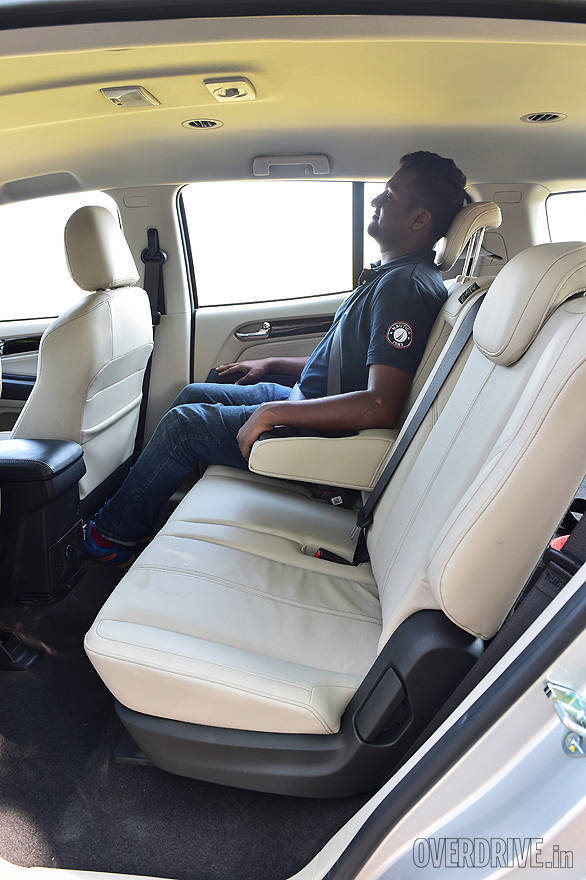 There's a lot of cabin space  even the third row offers decent kneeroom. The seats aren't as comfortable as the second row but can accommodate two adults making it a seven-seater. The second and third row seats fold flat too, converting the SUV into an 1,830-litre cargo hauler. Even with all-seats up, there's 235 litres of boot space on offer.

The Trailblazer gets the modern 2.8-litre Duramax turbodiesel motor that incidentally just received an update internationally. This probably was also the reason GM delayed the launch of the SUV in India. The four-cylinder DOHC unit produces 200PS at 3,600rpm and a massive 500Nm of torque that's available from just 2,000rpm. These figures make it the most powerful vehicle in its class by a margin. The motor gets a variable geometry turbo and there's minimal lag. There's also a balancer shaft that is claimed to reduce engine vibration and noise. The engine is quite audible from inside but compared to competition, NVH levels are slightly lower. However, the competition will soon be replaced with all-new generation models that may receive more refined engines too. 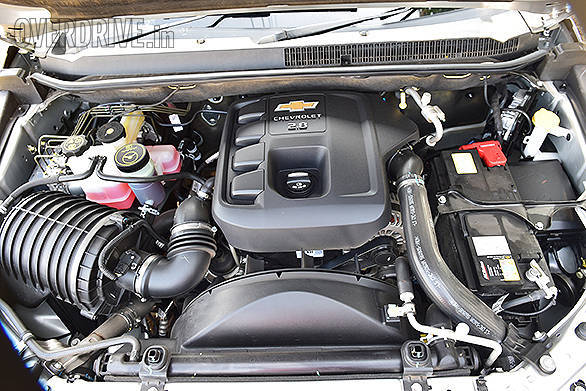 With 500Nm, the 2.8-litre turbo-diesel that produces offers a massive amount of torque

The Trailblazer gets a 6-speed torque convertor that makes full use of the powerful motor. Gearshifts are reasonably quick and smooth and if needed, one can shift manually too using the lever and also hold gears at the limiter. Performance is impressive too, 100kmph in our test came up in just 9.8s. A sub-10 seconds figure from a vehicle that weighs over 2 tonnes is a remarkable feat. Cruising at high speeds is effortless too and thanks to loads of torque on offer, triple digit speeds can be maintained without straining the engine. Despite all that power, overall fuel efficiency is a respectable 9.2kmpl.

Unlike the Captiva, the Trailblazer uses a body on frame construction  the first SUV from GM India to use such a chassis. Considering the high centre of gravity and the overall weight, the car does handle well. Body roll is present but there is a sense of being in control. The power steering is a hydraulic unit. It's weighed well, direct and goes well with the SUV character. In town, the large footprint takes time getting used to but that's something inherent in a large SUV. Ground clearance of 253mm is very impressive  it's like a jacked up Toyota Fortuner! This makes it an ideal vehicle to take off-road but then the Trailblazer is only offered in 2WD form as of now. 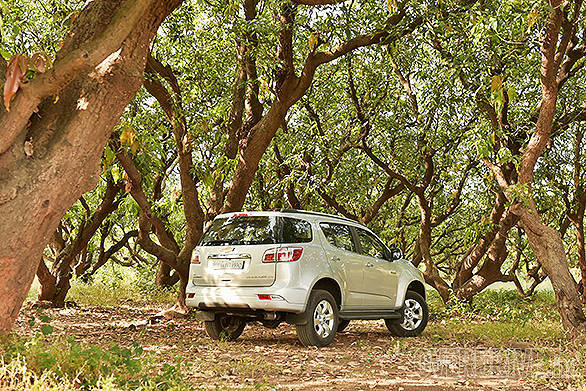 Although the Trailblazer doesn't have a very aggressive look, it makes up for it with its presence

We still ventured into demanding terrain and the SUV drove over it without complaint. Only if you are into hardcore off-roading (the majority isn't), will you miss the 4x4 feature. Features like hill descent control and EBD are offered as standard though.

Ride quality is a plus point too, be it potholes or broken roads, nothing comes in its way. We even drove over bumpy sections at higher speeds and the SUV stayed planted. 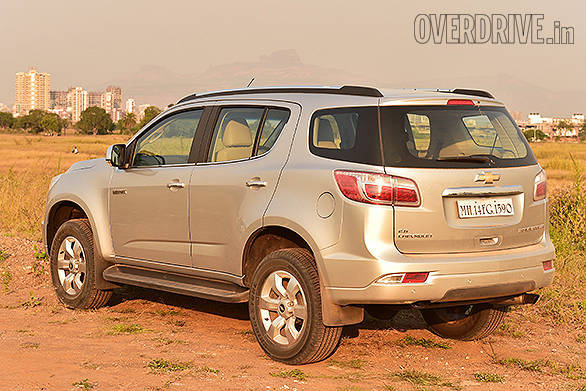 The Chevrolet Trailblazer did impress us on several counts. It's got the presence, the equipment, has a lot of power on offer and rides well too. We haven't compared it with all the rivals yet (we will, very soon) but it has the potential to better the competition in many aspects. Priced at Rs 27.2 lakh, the SUV is about Rs 2 lakh more than the automatic 2WD rivals and we think it's worth the premium. After the long wait, there is actually a Chevrolet that we think is worthy of the heritage that the golden ribbon carries. But there isn't much time to sit back and relax. The fight is coming to Chevy's backyard with the imminent arrival of the new Ford Endeavour and Toyota Fortuner  both synonymous with the SUV in India. 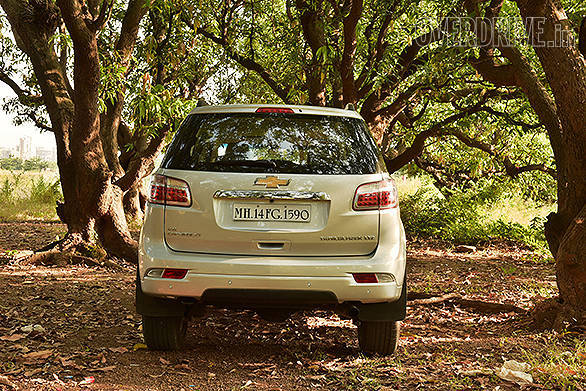