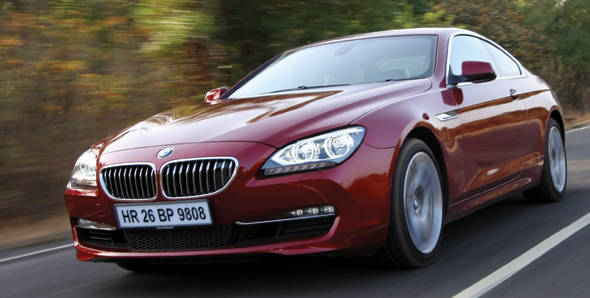 Gone are the days when diesels were dog-slow, smoky, noisemakers; today's oil burners, whether V6 and straight-6s in luxury cars, or even humble four-cylinders in hatchbacks can genuinely rival petrols for performance and driveability - even refinement - and that's before the cost-economics are worked into the equation. But a sporty diesel? That's still an oxymoron. To the petrol head the final 1000revs where the engine note takes on a banshee wail as it spears the red line will always be worth the monetary pain of filling up petrol; that eagerness, zinginess, inherent wap-wap-wap lightness firing up the child inside him. It is the reason why enthusiasts are called petrolheads, not dieselheads. And here's the car that turns things on its head.

Meet the BMW 640d. A genuine beauty; eye-catching in this enticing shade of maroon; gorgeous in line and flow. To my eye this is even better looking than the convertible 6 Series we sampled a few months ago and worthy of a few paragraphs just on the design. Yet this car isn't so much about the way it looks as it is about what's under the hood - the twin-turbo straight-six diesel that wears the tag of a 'sporty diesel' with conviction.

Let's start with the nameplate though, which can cause a bit of confusion. 640d doesn't mean 4.0-litre diesel, in the way the 530d is a 3.0 diesel and 520d is a 2.0 diesel. In fact the 640d uses the same engine as the 535d which displaces the same 2993cc as the 530d, the difference being two turbochargers to the 30d's single turbo. And that makes for a masterpiece of an engine, a proper powerhouse. The twin turbos operate sequentially, the smaller one delivers low down punch while the larger one provides extra shove at higher revs, both combining seamlessly to deliver a linear and tremendous surge of acceleration.

The figures are staggering. 313PS from three litres was until recently the highest specific output from a production diesel engine (surpassed only by BMW's only tri-turbo diesel) but even more shocking is the torque rating  630Nm which peaks at just 2000pm. It gives the 640d a brilliant muscle car feel, you can feel the latent power tugging away at the rear wheels waiting to be unleashed, there's always this terrific surge of torque waiting to light up the rear tyres at the merest tickle of the accelerator. And being a diesel you don't have to wait for revs to build up, power is delivered on demand and instantaneously, there's no such thing as turbo lag and in Sport mode the car is always in the right gear to punch a hole in the horizon.

More figures. 6.08 seconds to 100kmph: that makes it the quickest accelerating diesel we've ever tested. 22.85 seconds to 200kmph. 24.93 seconds to the standing kilometre mark. And a top speed that's limited to 250kmph. These figures are blindingly quick by petrol standards, by the standards of a diesel engine it is - forgive me for using this word over and over again - staggering. A diesel doing six seconds to 100kmph? Who would have thought

Even the engine note is quite unlike any other diesel I've come across; it sounds powerful and there's a gruff snarl when made to work. Unlike other diesels that grumble loudly this engine sounds quite intriguing at 4500rpm, unarguably the best diesel note that I've heard. It also revs remarkably eagerly and you could be fooled into pumping petrol at the pumps.

And the last set of figures. 18.5kmpl. I nearly fell off my chair when I read BMW's claimed fuel efficiency for the 640d and though our figures were more in the realm of belief - 13.8kmpl on the highway at a steady 110kmph cruise and 8.1kmpl in the city that still makes for an overall figure of 9.5kmpl.And if you are on a really tight budget all 6 Series models feature a new ECO PRO mode that dampens throttle responses, optimises the gearbox shift strategy and even tweaks the energy consumption of the climate control and heated wing mirrors to improve economy. In this mode we got 15.1kmpl on the highway run which means on a 70-litre tank you can realistically do over 1000km. Staggering. (And I promise not to use the word again).

It makes the 640d a hugely effective long distance weapon and I really do mean it. Unlike the old 6 Series that had a really harsh ride the new 6 Series is much softer and compliant. Dynamic Driving Control and Dynamic Damper Control are standard allowing it to switch from Comfort to Sport with a new Comfort+ mode that makes things even more calm and relaxed. Not as relaxed as an S-Class though and you can feel slight pitter-patter from the suspension which is a bit unsettled over less that smooth roads.

In both Comfort modes the 640d also exhibits a surprising amount of body roll and switching into Sport or preferably Sport+ is recommended when charging up the twisties; the improved body control of course coming at the expense of ride quality. Sport+ also loosens the electronics' iron grip allowing easy slides thanks to the prodigious torque and just in case you intend to go drifting at night the full-LED headlights not only bends round corners but also adjusts to the car's yaw rate. The headlamps compensate for oversteer! Stagg Ultimately though the 6 Series cannot match the sublime dynamics of the Porsche 911 but then again the 6 is a Grand Tourer with a far more comfortable and spacious cabin.

The increased wheelbase of the L6 platform (which also underpins the 7 and 5 Series) improves room at the rear so much so that children won't complain too much. The cabin itself is lovely though too generic BMW in its layout and our test car was loaded with options to make your ears bleed. Comfort seats with integrated heating, cooling and massagers for Rs 5.5 lakh. 16 speaker 600W B&O sound system - Rs 5 lakh. Leather finish on the instrument panel - Rs 2 lakh. TV - Rs 1 lakh. Head up display - Rs 1.6 lakh. Night vision  Rs 2.8 lakh. Contrast stitching - Rs 30,000. Ceramic package - Rs 70,000. Plus there's Adaptive Drive which includes active anti-roll bars for Rs 5 lakh and Active Steering for Rs 2.2 lakh. And if you have some change left over Rs 3.4 lakh gets you the M Sport body kit and steering wheel (which the press car didn't have as journalists tend to be careless over speedbreakers). Staggered?

Or you could just ignore all the options, shell out Rs 75 lakh (ex-showroom, including taxes Rs 96.39 in Mumbai) and get yourself a beautiful car that can hit 100kmph in 6 seconds, pull long slides at the flick of a button, will do 15 kilometres to the litre when asked of it and sips diesel.

Dieselhead. Has a nice ring to it.