I clearly remember the first time I saw an RSV4. It was 2012 and I was on holiday in Malaysia to watch the MotoGP. A relatively new rider at the time, I was stunned to see that the mighty Aprillia felt nearly as compact in the saddle as my humble Yamaha R15. How could this tiny feeling bike be one of the fastest and most exciting production machines to ever lap a racetrack! That question reverberated in my head for years but I brushed it off, never even dreaming that I'd actually ride this machine some day. But life has a great way of working out and four years later, here I was in Coimbatore to ride Aprilia's excellent new SR 150 when we were told we'd also get to experience the company's finest - the RSV4 RF. It's time to meet a hero! 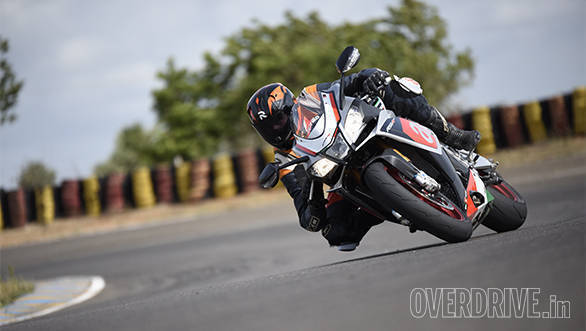 I've seen this bike a few times since, but it's still special to glimpse a shiny RSV4 in the warm early morning light, especially in this spectacular Superpole graphic scheme. In seconds, the bike was surrounded by a swarm of drooling journalists gazing, sighing and waiting! The triple lamp face, taut bodywork and racebike-like tail section are simply mesmerising. Suddenly, the swarm snapped out of the trance with a collective gasp as the Aprilia technician started her up.

Nothing can prepare you for the first time an Aprilia V4 fires up in an enclosed space like a pitlane. It starts with an explosion that settles into a deep rumble at idle, a sound that instantly transports you to the paddock at a MotoGP weekend. Even at idle, this bike is so loud that I wonder how Aprilia ever managed to clear sound regulations!

I've never experienced an Aprilia V4 before this but I'm told the latest RSV4 engine has been significantly reworked in order to breach that magical 200PS mark. Standing out among the many changes are a new head design, a redesigned crank that's 600gm lighter than before and all four valves in titanium. The 8 injector fueling system system is also new as is the lubrication system and entire exhaust. The result is a stunning 201PS@13,000rpm and 115Nm@10,500rpm. 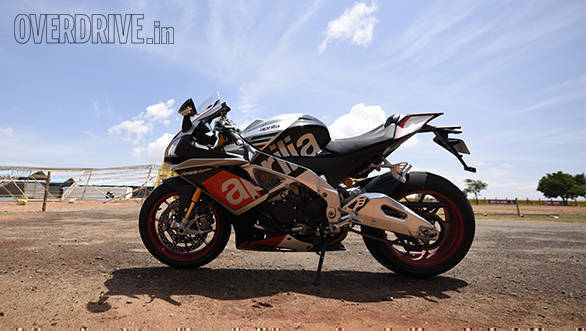 Those are frightening figures for a tight and short racetrack like the Kari Motor Speedway. However, some peace of mind comes in the massive electronics suite that promises keep the performance a controlled explosion. It took a good five minutes for us to get the full lesson from the Aprilia technicians on all the electronic aids that make up the APRC (Aprilia Performance Control) package. There's an 8-stage traction control system, three stage ABS system, three stage anti-wheelie, three stage launch control and a quickshifter. 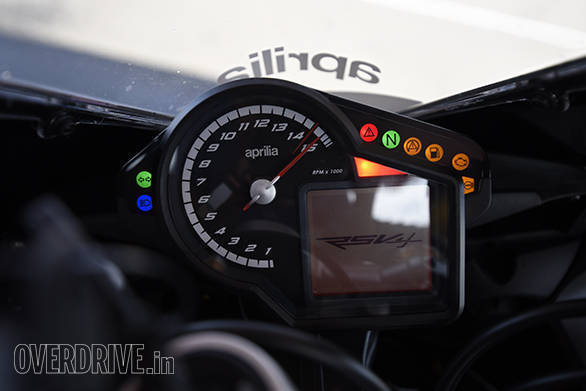 The rider can also choose from three maps, Sport, Track and Race, with Race offering heightened engine response and reduced engine braking effect. All these functions are easily navigated using buttons on the left clip-on as well as the engine start button on the right. Aprilia takes it a step further with the V4-MP smartphone app that shows telemetry data including lean angle and rpm. The really cool bit is that it allows you to set up the traction control and anti-wheelie function for individual corners on a racetrack. That's as close to a MotoGP bike as it gets! 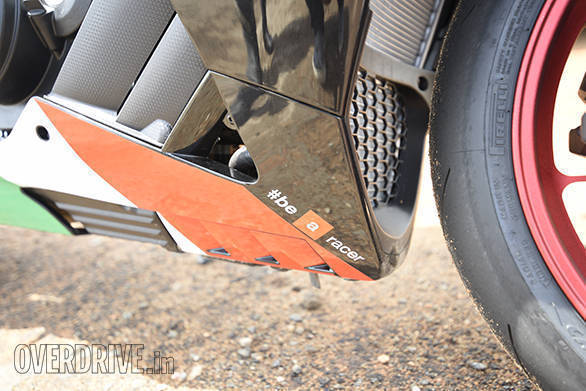 Since there was a queue of journalists and just one RSV4, we were going to get only five laps each (I cheekily squeezed in an extra three laps!). Riding out of the pit lane, it was obvious that the RSV4 feels very cramped. But tall riders like myself still fit on the bike and any thoughts of discomfort were gone with the first throttle opening.

Taking it easy on the first lap, two things stood out. One, power arrives in a beautifully linear surge and two, the bike turns telepathically - it's as though the chassis is connected to your brain via another app Aprilia didn't tell us about! Physically, the RSV4 feels no bigger than a 600cc supersport and I found myself loving how manageable it felt before the end of the first lap.

Blasting down Kari's long main straight the RSV4's raw power becomes apparent and you're pushed hard into the bump stop at the back of the seat. Even with a fairly cautious braking point, I was getting on the stoppers at about 245kmph in 5th gear. The dual Brembo M430 callipers on the RSV4 offer mega stopping power at your fingertips. It's only under strong braking at such high speeds do you notice that the braking zone at Kari has rippled tarmac thanks to the high-downforce Formula cars. With ABS in level 2 setting, the lever began to pulse under hard braking, a scary sensation at such high speeds. Backing it off to Level 1 stopped the ABS intrusion leaving only eye popping performance. 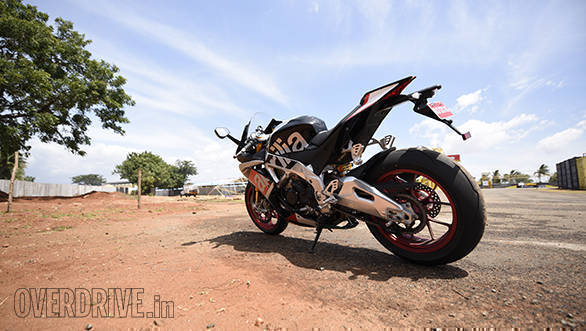 The 999.6cc V4 engine is beautiful for a number of traits, the glorious sound, the compact packaging and the MotoGP connection. But I fell in love for different reasons - smoothness and tractability. The speed of these bikes is so overwhelming that despite having lapped Kari over a hundred times in the past I found myself struggling to set the bike up properly for the corners. Simply put, I wasn't always entering corners in the right gear or speed.

On my third lap I entered the tricky Bermuda left-right complex in second gear and the next lap in first gear. Anyone with experience riding big bikes will know that opening the throttle while leaned over in first gear can be tricky. Super sensitive throttle can kill the fun on a race-track (think Suzuki GSX-S1000) but the RSV4 has this sorted out perfectly. No matter the gear, you can gently roll on the gas and feel the power go smoothly to the rear wheel without any jerkiness. The feeling is magical and the bike encourages you to get on the gas sooner and harder lap after lap. Ultra sticky Pirelli Supercorsa SPs only make things better. 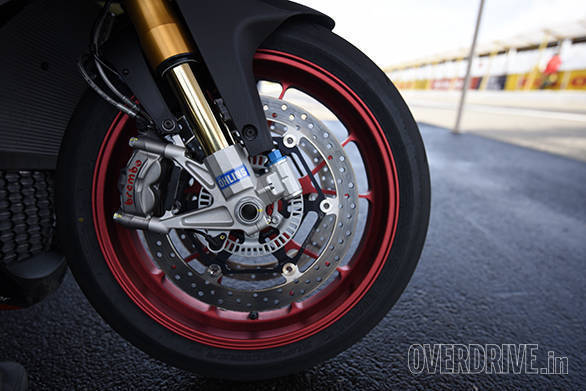 Then there's the amazing Ohlins suspension. Anyone familiar with Kari will know of the super quick but bumpy left-right kink after turn two. Talented riders will take this section flat-out and even on my KTM 390 Duke I hover above the seat through this stretch because of the bumps. On the RSV4 though, you just go straight through and the suspension absorbs the bump and returns to central position in what feels like one clean motion. No drama, no unnecessary bouncing about or headshaking, just clean progress. That one section taught me exactly where the money goes when it comes to top level suspension. 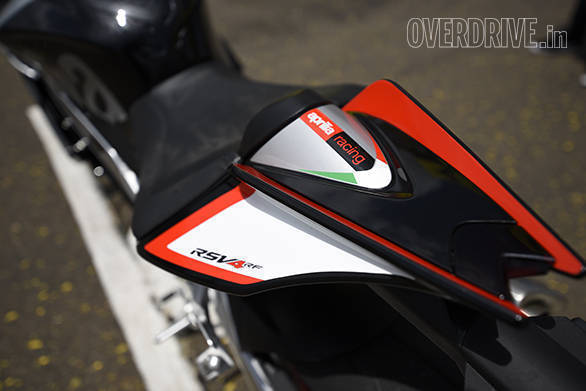 The RSV4 RF has such a depth of capabilities that after my session I was left with conflicting emotions. On one hand, I felt dejected that this bike was simply too good for me and that I perhaps didn't deserve having one. Then again, with more time, a couple of weeks or maybe even a few months I believed I would begin to properly understand the bike and use it to the best of my abilities. What brought these optimistic emotions about was the encouraging chassis, how nurturing the fantastic electronics are and just how spectacularly special this bike feels to ride. 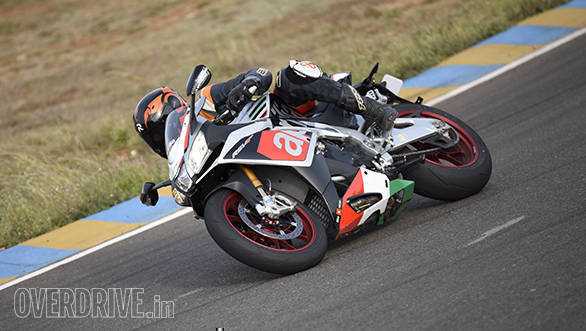 In a span of a few laps my elbow went surprisingly close to the floor and I haven't been able to get my jaw off it since. While the full road test might reveal real world drawbacks it doesn't matter to me. I met a personal hero and it gave me the most amazing motorcycling experience of my life. 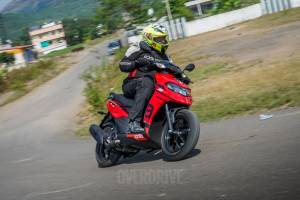 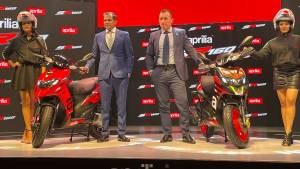 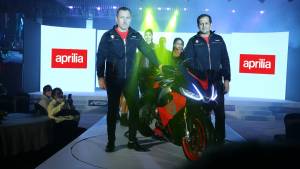