The 2022 Suzuki Katana's is the modern iteration of the original 1981 Suzuki Katana  a motorcycle that broke the mould with its boxy yet sharp, revolutionary design language back in the day. And with the 2022 Katana, clear evidence of that homage to the outstanding machine from the yesteryears comes in the form of its bold external design. The rectangular headlight with its tiny flyscreen, the compact proportions, the sharp lines that run across every panel of the bike from fore to aft that appear to slice  through the air while standing still, much like famed Japanese sword of the same name, all contribute to make the bike appear highly desirable. 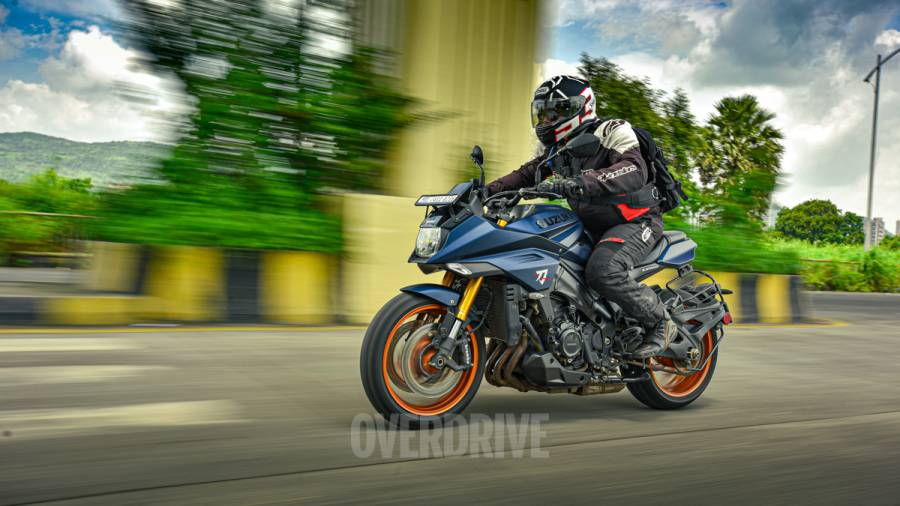 Yes Suzuki took it's time to bring the bike to India after setting tongues wagging at  the EICMA 2019 with its jaw-dropping retro-modern looks, but the bike has been on the receiving end of some cosmetic and mechanical enhancements that keep it up-to-date with the current set of retro-modern themed desires and emissions norms. And now that it's here, things really feel right with the world once more. 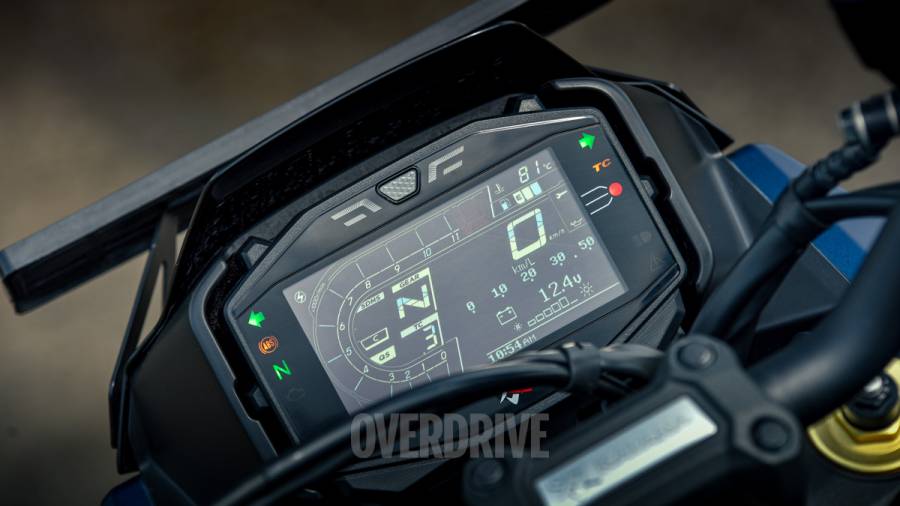 The 2022 Suzuki Katana is not loaded with a rich variety of electronic aids which motorcycles cost about the same out here come equipped with, but it does get S.I.R.S which basically includes a bunch of Suzuki's electronic control systems which can't be tinkered with on the fly, but you do get the Suzuki Drive Mode Selector system, which includes three selectable throttle maps. For 2022, a bi-directional quick-shifter, five-levels of selectable traction control, and a slipper clutch as standard equipment. 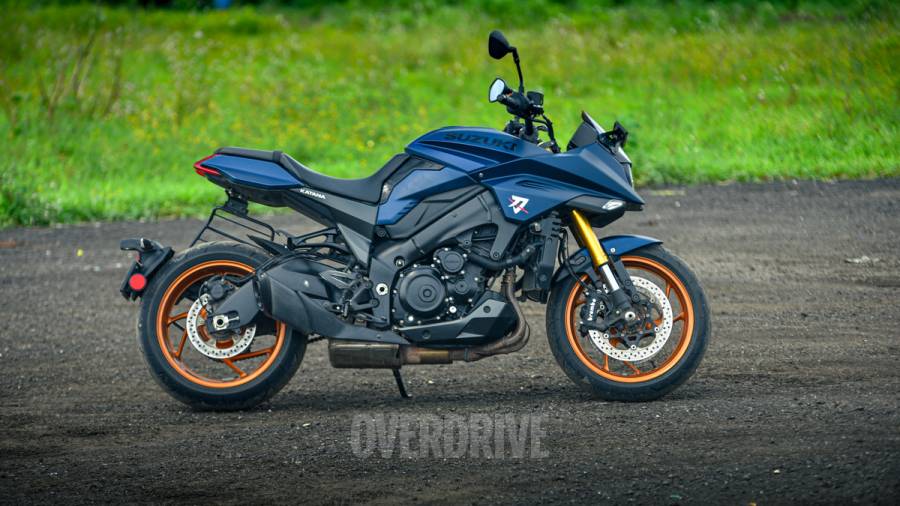 At the heart of the 2022 Katana is a BS-VI compliant 154PS, 999cc, inline-four engine derived from the unit powering the new GSX-S1000. For 2022, this powerplant features revised intake and exhaust camshaft profiles, redesigned valve springs, a tweaked clutch, and a new exhaust system. The torque curve with this bike is broad and smooth, and the motor is highly tractable for everyday usage. You can be in a gear as high as sixth and trudge off from around 25kmph without a fuss, not have to touch the clutch lever. At times like these you feel that the 1000cc Suzuki behaves like a motorcycle of a much smaller capacity. Its 217kg weight is more than manageable, even at low speeds. If you're stuck in traffic or riding over a slippery surface astride the Katana, ride map C is the one to switch to, because the bike doesn't feel jumpy and the engine delivers power at a relatively calm rate. 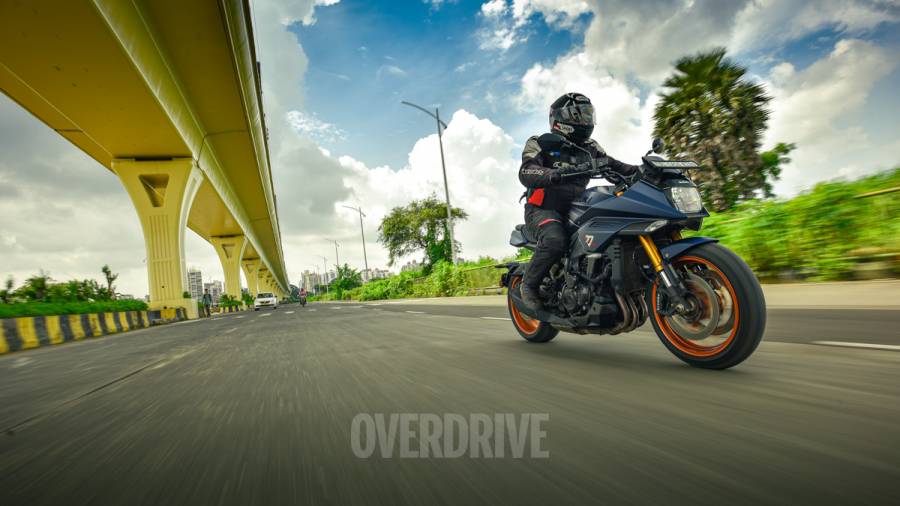 At the other end of the spectrum when the roads open up and you fancy some serious wind in your face, all you have to do is switch to engine map A, and the throttle response is heightened, the motor feels eager to rev hard. All the fun starts north of 6,000rpm and banging through the gears with the quickshifter with the whine from 4-2-1 exhaust increasing as you pick up the pace just makes slicing through every scene intense and exciting in addition to being an aural delight. The front end feels light and you always get this feeling of raw power on tap which feels brilliant. Now you feel as though you are riding a proper litre-class thoroughbred. Also the heat dispersion is quite commendable, and your legs won't feel crispy after a good amount of time in the saddle. This engine is really just something else. 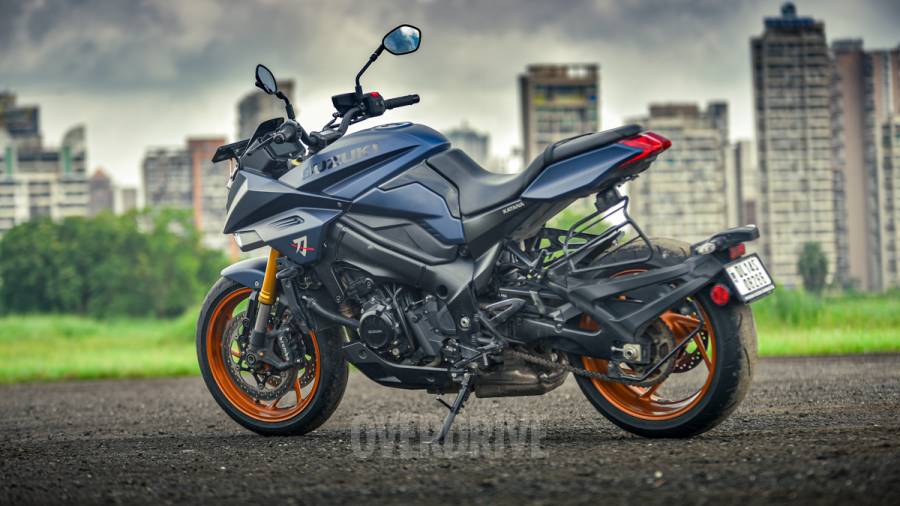 The Katana will have you seated in a riding position that will have your arms out wide to meet the flat-ish bar with your legs tucked up and in which feels sporty but rather relaxed, and this coupled with the adjustable suspension that's setup firm, feels right at home while tackling city streets and even winding mountain roads, while the brakes feel more than capable of bringing the bike to a halt in time. 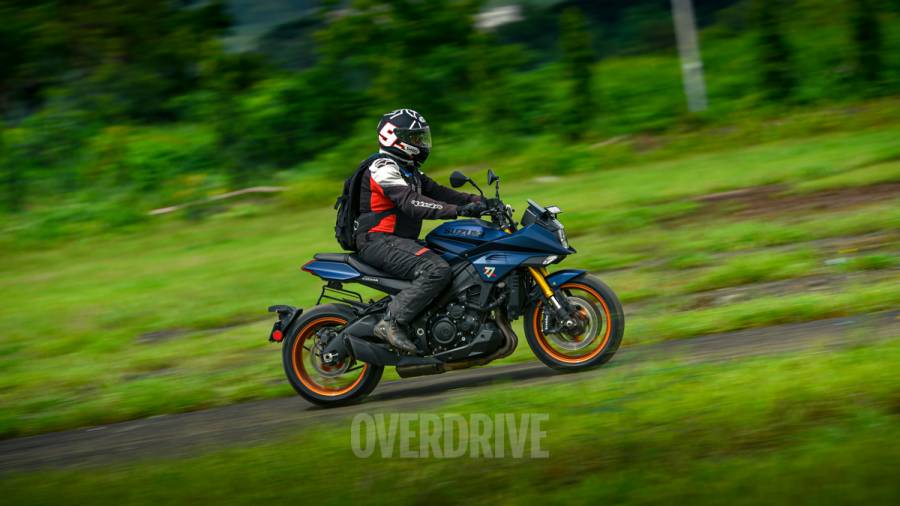 It's mostly all fun and games with this motorcycle, but I did notice a couple of downsides as well. First up, the display  which is cluttered with information and difficult to decipher at a quick glance. Second, the 12-litre fuel tank which means fuel stops are not going to be few and far between. Lastly, the its pricing. Considering all the tech that it brings to the table, the Katana is expensive. There currently are litre-class bikes that offer more in terms of features for around the same price. But with its amazing engine, stunning looks coupled with its simplistic beauty, the 2022 Suzuki Katana is nothing short of a highly impressive and desirable machine. 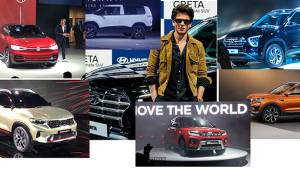 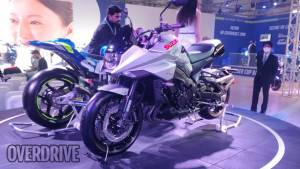