You probably know me, I would rather pair a t-shirt with denims and go drive a fast car on a winding road than dress up in formals and attend meetings. But sometimes, some cars demand that I clean up, don a blazer and even have a chauffeur ferry me around. I did just that on a fine Monday morning. I even had a lean breakfast so that I could button up that blazer which comes out only once in a while. I can't really be doing a three-piece suit, but I do clean up enough to tell the world I'm going to be driven around. Just the way the white limo that pulled up in Ritz Carlton's grand driveway to pick me up had a little more gleam and a few more premium yet elegant touches to tell the onlookers that it was more than the "regular" S-Class which is fast becoming a common sight thanks to its technical prowess. 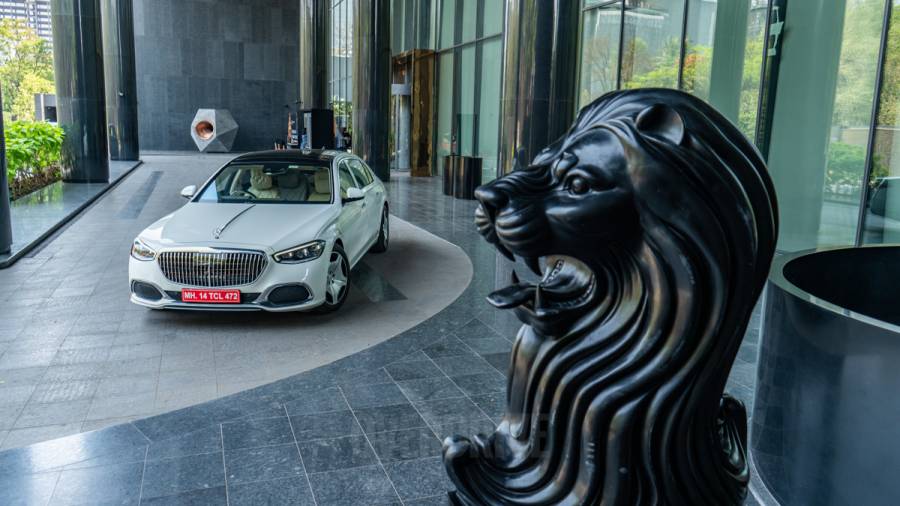 Of course, a Maybach needs to push that technology envelope further, because if only having the three-Ms was enough, that emblem would flaunt itself on the bonnet and not sit on the c-pillar. I see an AMG GT owner park and walk towards the lobby as I walk towards "my" Maybach, so I decide to show off a bit of the new technology. Before the valet can reach out for the door, my chauffeur swipes on the infotainment to swing open the door, handsfree. People who notice are intrigued. I step in, smirk and gesture at the valet instructing him not to close the door and then gesture at the door instead to make it close automatically. 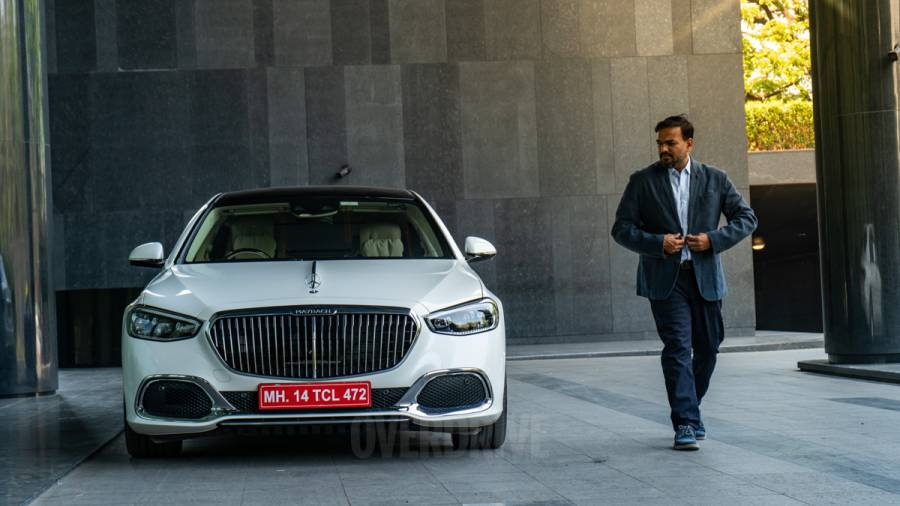 Thankfully, I had practised this gesture control enough so it did work as intended without making me look like a deranged fool. The Magic Doors, as they are called, use 3D cameras and laser-assisted sensors so that these gestures can be read even in dim lighting conditions, but you need to get the angle and the speed of the motion right for them to work well. If you would rather not use gestures, a simple touch on the outer door handle or pressing a switch in the roof liner will close the door just as elegantly. 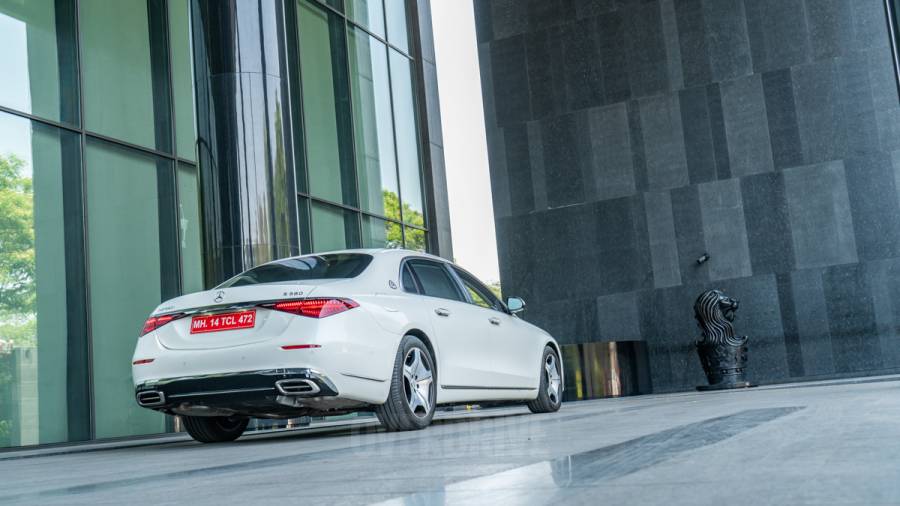 The gesture controls will also let you close the sunroof blinds, control certain lighting functions, audio etc. and while they are a bigger conversation starter than the new wheels one must take a moment to appreciate their beautiful mono-block design. Hopefully, your chauffeur won't kerb them. I'm still a t-shirt wearing simpleton so I can't help but compare that the four mono-block wheels are rather expensive and yet cost lesser monies than a pair of Maybach-branded/compatible Champagne flutes. These wheels not only accentuate the grandeur of the Maybach but also sit a few millimetres further apart to afford the Maybach a longer cabin. 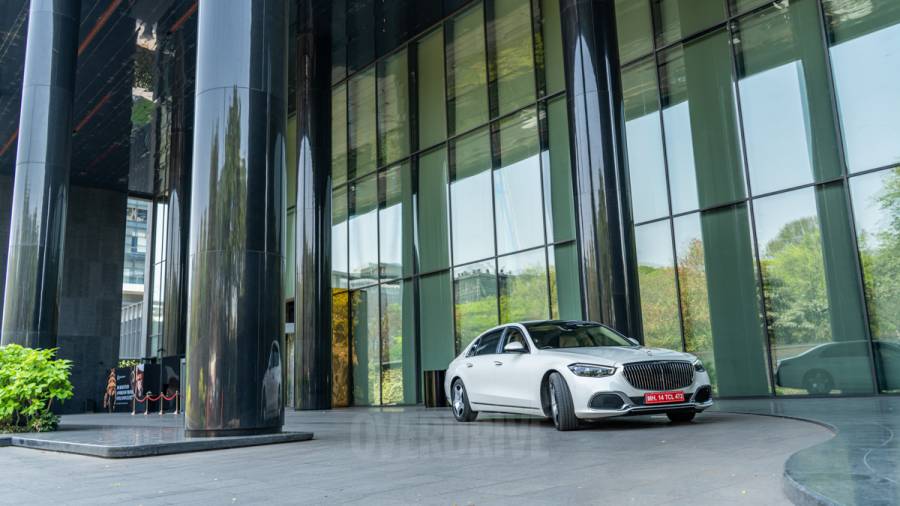 Being a Maybach, the cabin is not only roomier but has all the luxury appointments you would expect - Nappa leather in a diamond quilted pattern, plenty of colour and material options to suit your taste, and of course, the first-class seating! You can also spec it up with a refrigerator to hold the Champagne, temperature-controlled cupholders, work tables et al. Being based on the S-Class, everything you touch and feel in the cabin not only feels expensive but also feels new-age - down to the visual texture of the ambient lighting. Add to it the multiple touchscreens, the touch-sensitive switches and knobs and the, eh, gesture controls and you would wonder what's next - maybe next-generation of the S-Class will read your mind! 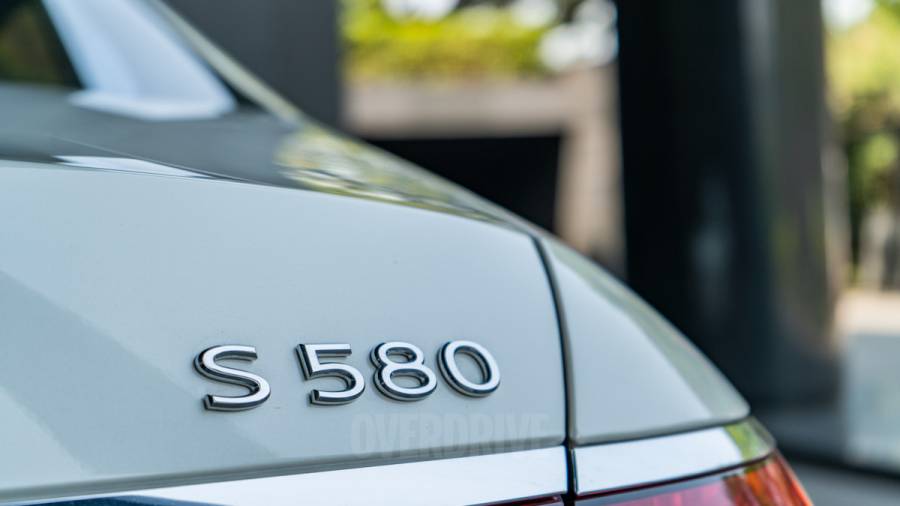 Speaking of the next-gen S-Class, would it even have internal combustion engines? Maybe not. Maybe that is also the reason why the V12 lives on while it can in the higher-spec S 680. The S580 you see here is motivated by a humble V8 though. Honestly, Mercedes-Benz has a lineup of highly efficient four, five and six-cylinder engines which could work just fine for a car of this order - but the V8 and V12 engines give the Maybach a clear distinction over the S-Class and place them higher even in the technological hierarchy. I call the V8 humble because it operates with elan, putting the power down in a clean and dignified manner. But when you are in the mood it will send those horses as enthusiastically as a V8 should. How does a 0-100kmph in under 5s sound? Sounds like a V8 to me, quite literally. 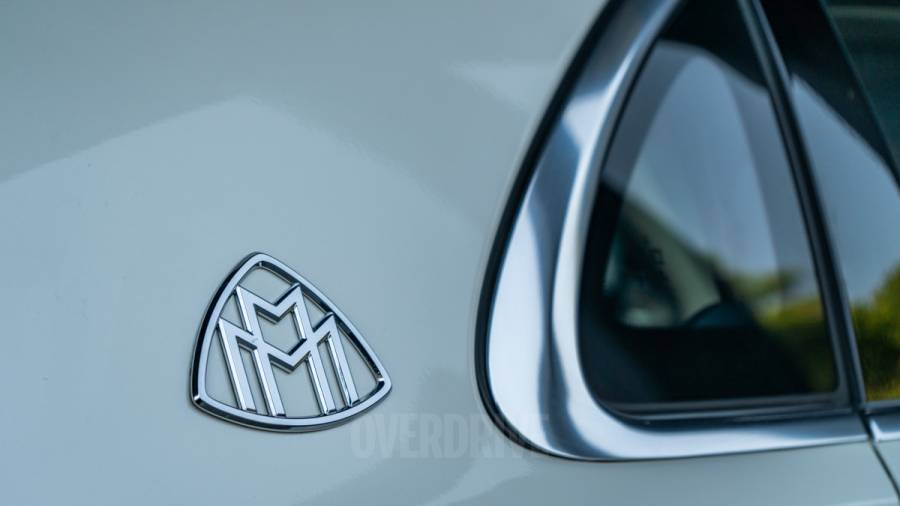 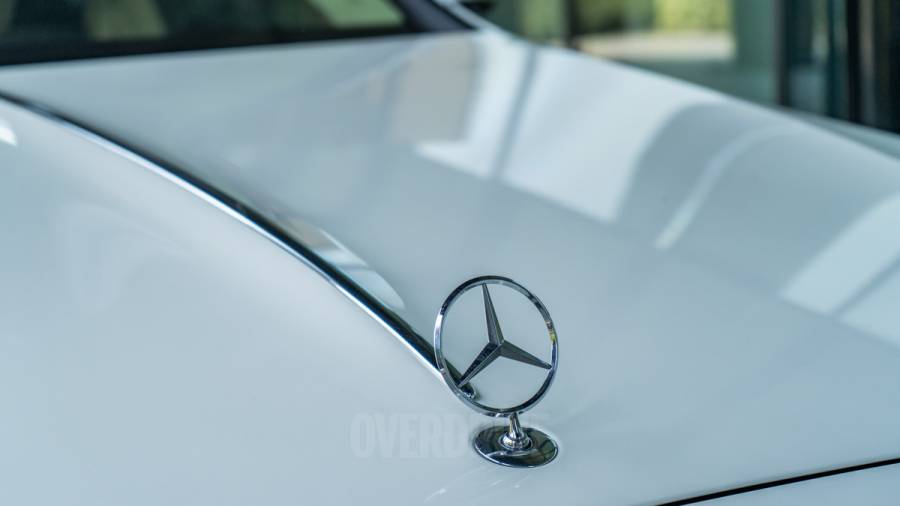 Cruising through the crowded city streets or elegantly wafting down the highway is what such a Maybach will do for most of its life and that it does extremely well. The cabin keeps its occupants inert of the road imperfections with such grace that it will give many SUVs a run for their money. It is astonishing how quickly the rear suspension reacts to any undulation encountered at the front wheels to keep the boss seat well cushioned. 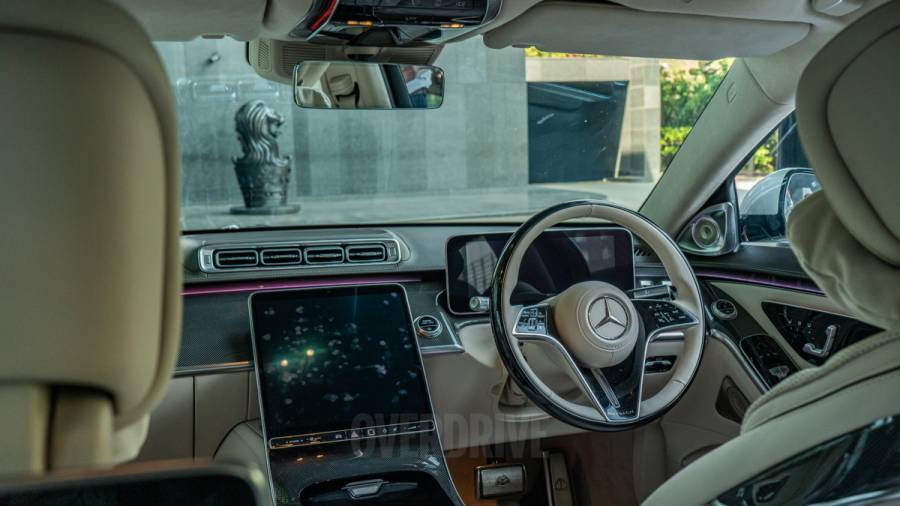 On the rare occasion that you get behind the wheel and maybe awaken the deeper lairs of the V8, you will notice that the electronics work meticulously to safeguard the luxurious ride of the car, discreetly curbing the power to keep things tidy and elegant. That is when you will realise that you probably need to change the drive mode to Sport to really enjoy the V8. With the new generation of electronics that respond so fast to driver inputs, the Maybach S 580 can put an older S AMG to shame with how quick and fast it can go around bends despite that massive size. It also gives you the option to choose a rear-wheel steering system that will practically shorten the wheelbase when hitting winding roads or while simply making U-turns, to ensure that the Maybach remains agile and practical despite the size. 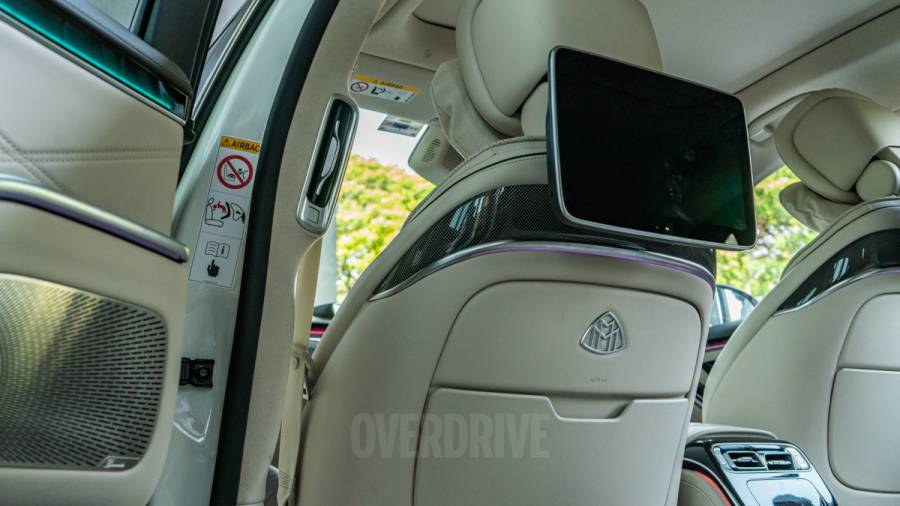 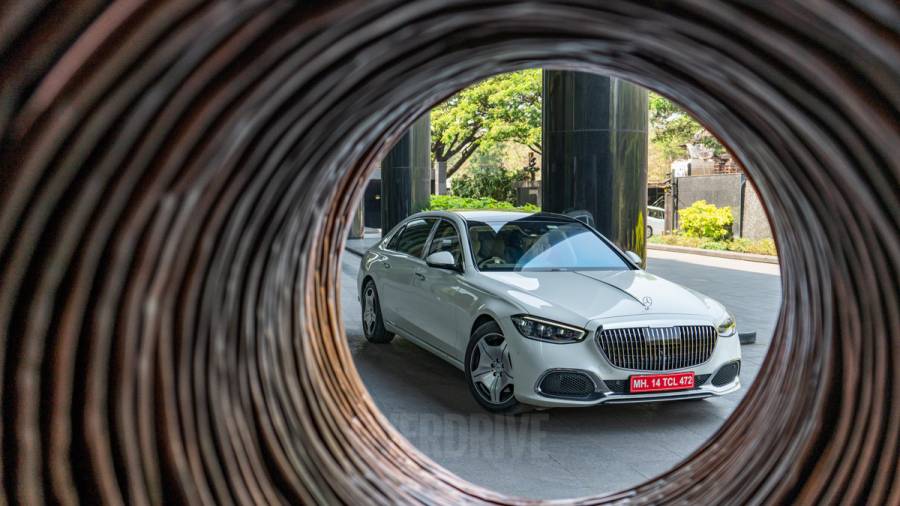 Speaking of size, the S 580 is 5.5m in length, which makes it 2m longer than the standard S-Class, but it still ain't as long as the Maybach Sixty Two - the car that introduced many of us 40-year-olds to this historic marque. That also happens to be the age group that's popularly buying the new-generation Maybach saloons in India. And while the S 580 or the S 680 (which is now sold out for the next two years) may not enjoy the same limited number exclusivity of the Sixty Two, they are still quite special. Because you see, Mercedes-Benz is slated to go all-electric by 2030, so given the typical lifecycle of this model line, I won't be surprised with the second-generation EQS could actually be the next S-Class. From that perspective, these Maybach models (and their facelifts that will come a few years from now) could be the last of their kind and may even become collector's items. It's a shame I didn't have the S 680 at my disposal, and a bigger shame that at 40 I still don't have the money to buy one of these. Maybe it is something to do with choosing t-shirts over tuxedos.