The Audi Q3 has always been right at the core of Audi's SUV range in India in terms of popularity, offering up the usual Audi brand of luxury in a compact size and approachable price point. However, it's been over two years since you could buy one and four years since this second-generation debuted globally. But fret not, Audi has been rebuilding its India line-up since the switch to BS6 and the Q3 is finally back.

The Audi Q3 in this guise is 96mm longer, 18mm wider and 5 mm shorter than before. That compact, crossover-ish look from earlier has been dispensed with, the Q2 now being a part of the line-up. Instead, the Audi Q3 now looks more like a typical, upright SUV which most prospective owners will like. 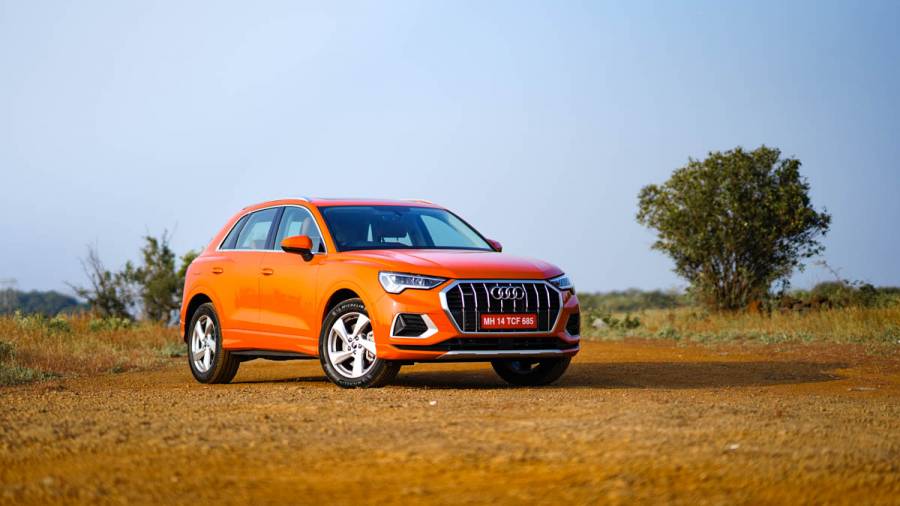 The more noticeable changes are to the Audi Q3's face which brings it closer to the big Q7 and Q8. So you have a very similar, kinked LED headlamp with the segmented DRLs while the large full-face grille, now with the new-style vertical chrome highlights, gives the Q3 much more of the presence you expect from an SUV. That sense is enhanced with silver accents that look tasteful along with the quite intricate bumper inserts and wide air dam.

That more upright sense continues when you see the Q3 from the side. The glass house is simple but functional and that SUV character is further defined by the more prominent creases on the fenders and rear haunches. This brings the Q3 closer to the Q5 in a sense although we would have liked a sharper, dual-tone design for the 18-inch wheels. 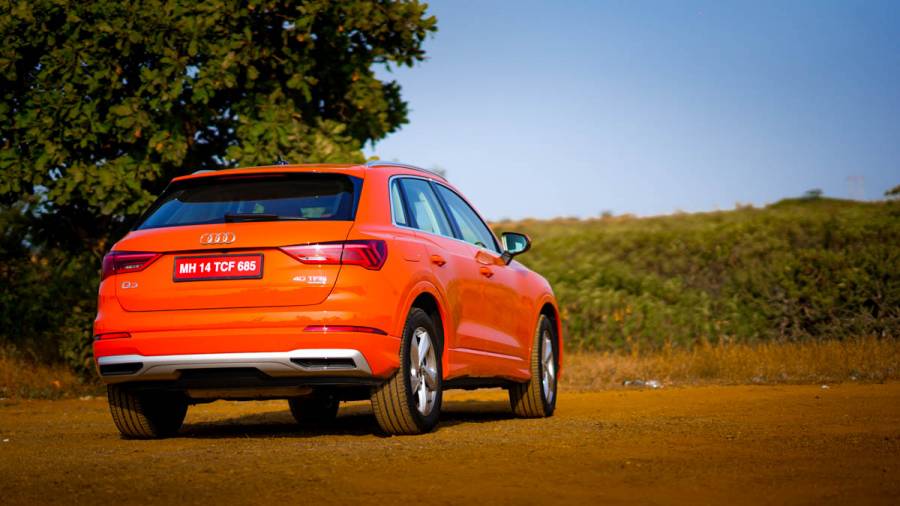 At the rear, the two-part LED taillamps are quite attractive with their intricate detailing. We also like the crisp integration of this with the raked but fairly simple boot lid. Function takes precedence but there is some of that silver accenting from the front repeated here around the ornamental exhaust tips. 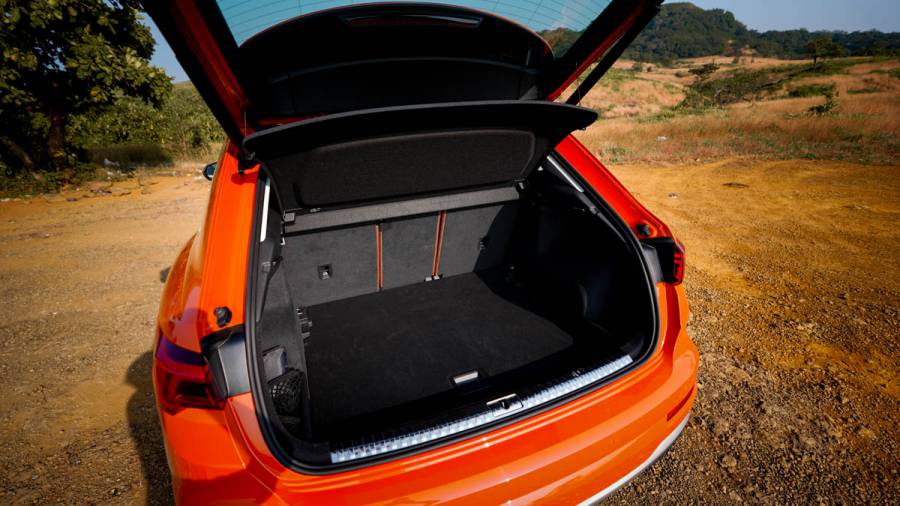 Now the increased length has added 70 litres to the boot space taking it up to a useful 530 litres. The seats fold flat to make up over 1,500 litres of space but sadly the mechanism for this can only be accessed from the cabin, a tab within the boot would have been far more convenient. Either way, you get a powered tailgate with this top Technology trim and the space is flat and wide with a low load lip. The large spare wheel causes the floor to be at a slant but other than this the Q3 should gobble up a weekend's luggage for the family quite easily.

The Audi Q3 moves to the MQB A2 architecture which it shares with the likes of the Tiguan and Kodiaq. The effect of this is most visible on the inside with the massive improvement over the last generation in terms of the way this space looks and feels. You now have this modern, sharp-edged and quite technical-looking design with the stepped dash design and the wide centre-console angled to the driver. It may be doesn't have the initial wow factor of something like a GLA but that functional but luxurious aesthetic of larger Audis is well represented here. Even the ambient lighting is subtle but tasteful in its execution, like the way it backlights the Quattro badge on the dash. 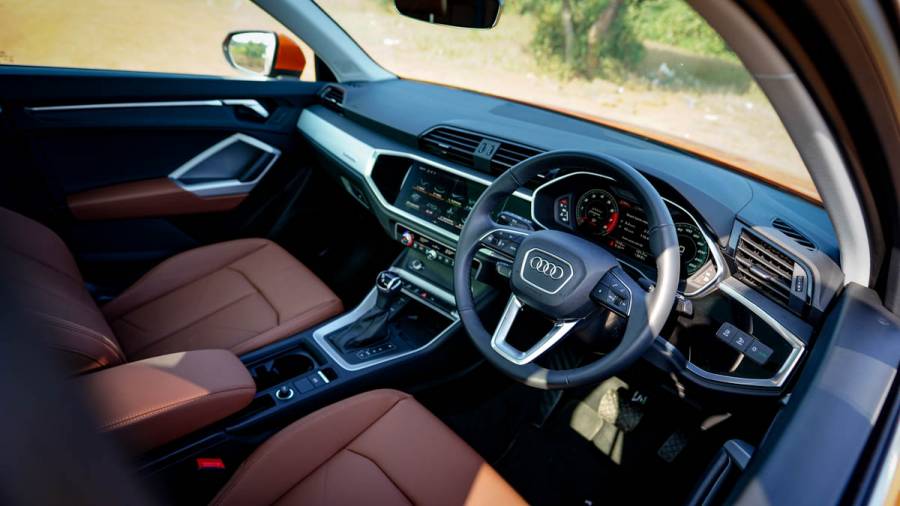 As always, that solid quality that you expect from an Audi is well and truly present. We would have liked the soft surfaces, which cover most touchpoints, to have a bit more give but Audi has managed to bring consistency to the material quality even in the lower reaches of the cabin which is a plus. This tan leather upholstery adds to that sense, a white option is also available. 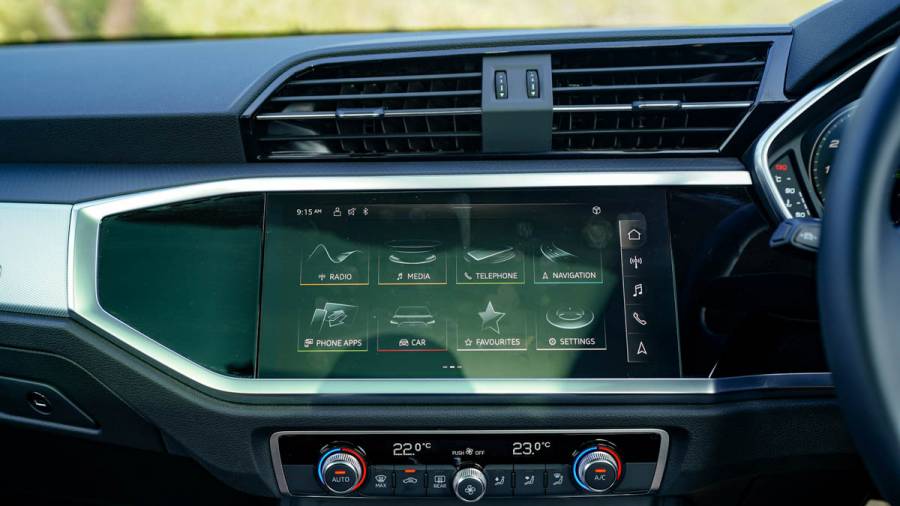 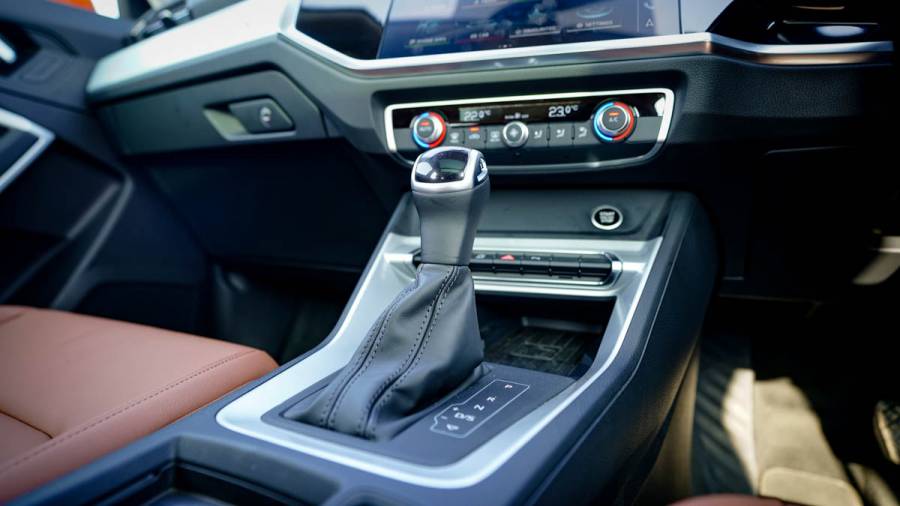 We also like that Audi has retained a single-screen layout for the Q3, with the fiddly touch screen for the climate controls from its larger siblings replaced by physical controls. The climate control knobs function with satisfying heft and tactility. This is also true with the physical controls for the volume controls and drive modes. If anything, the panel which houses these could have looked less bare and had fewer blank switches. But you get a large wireless charging pad as well as thoughtful storage spaces in the centre console even if the door pockets could have been larger.

Audi pioneered the now-common digital instrumentation, and while rivals may now offer more screen options and better customisation, the Audi's 12.3-inch virtual cockpit is still hard to match with the amount of information it presents crisply. The same can be said of the 10.1-inch screen with its simple layout and logical sub-menus, although the lack of wireless Android Auto/Apple Carplay and branded speakers is a miss. 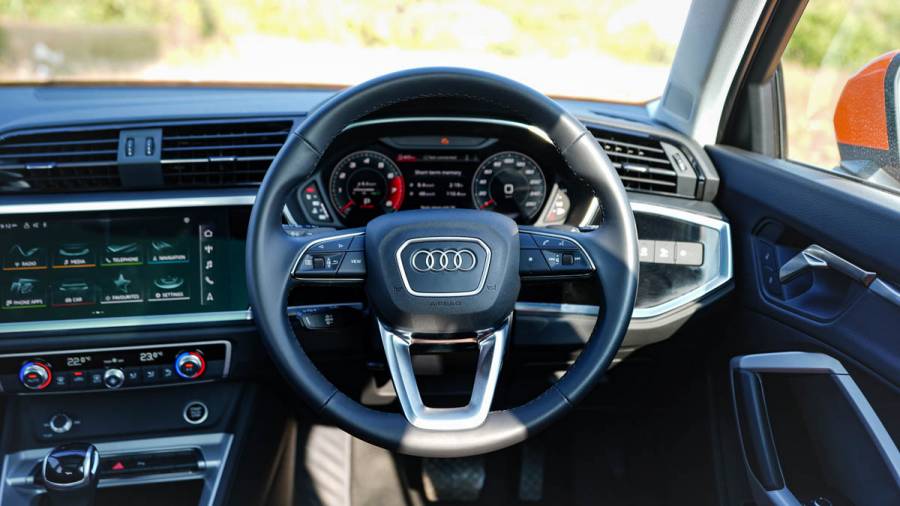 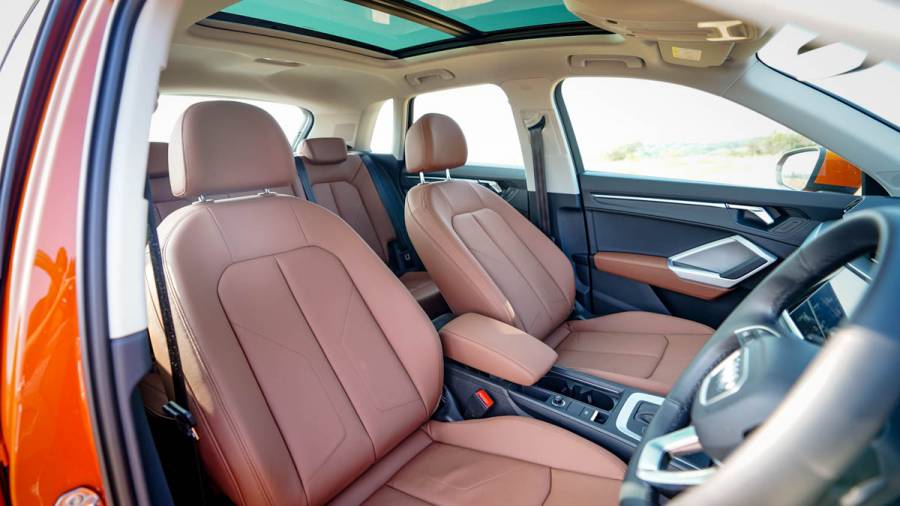 The added space has also brought with it some comfortable front seats in the Audi Q3. They are wide and well-contoured, so should be suitable for all body types, although you don't get extendable squabs. Instead, you have powered adjustment and lumbar for both the front seats.

But the most important change with this generation of the Q3 is to the rear seat. The last Q3 was quite compromised in this regard but that has been taken care of fairly convincingly. The door opening could have been wider, getting in and out may be a bit challenging for larger adults, but the large windows and full-size panoramic sunroof make for a great sense of space. 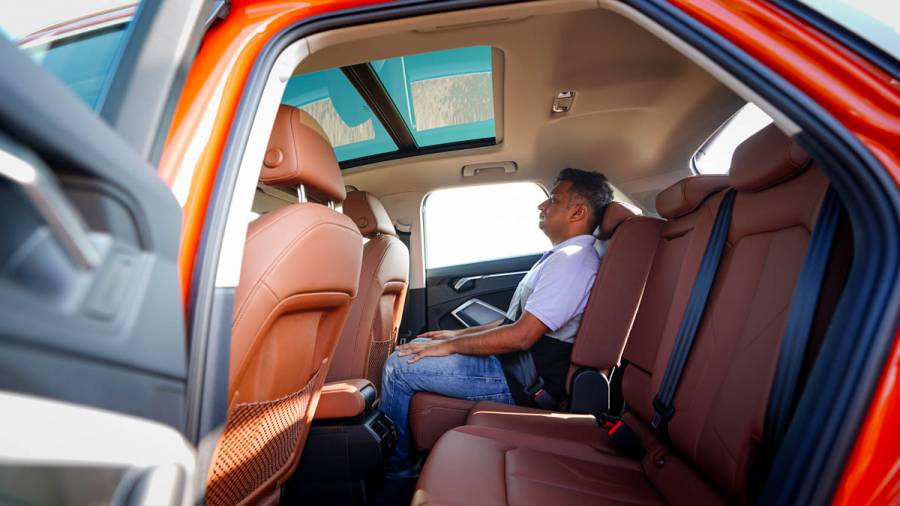 The added 77mm of wheelbase has brought with it great knee and legroom while the seats themselves offer good back and thigh support, the latter helped by the long squab extensions. But this does compromise the third passenger, already hampered by the central tunnel. You even have a cut-out in the headliner to improve headroom but sadly the left-hand-drive orientation puts it on the wrong side for India. With the Audi Q3, you also get 150mm of fore and aft adjustment for the bench and seatbacks that recline to a comfortable angle, a big leg up to the already impressive improvements made here.

As with the entire Audi range in India, the new Q3 is now a petrol-only offering being powered by the 2.0-litre turbo petrol, as seen in the Q2 and other Skoda-VW offerings, putting out 190PS and 320 Nm which pairs with a seven-speed DCT. A notable differentiator though is that the Q3 comes standard with quattro AWD, unlike many rivals. 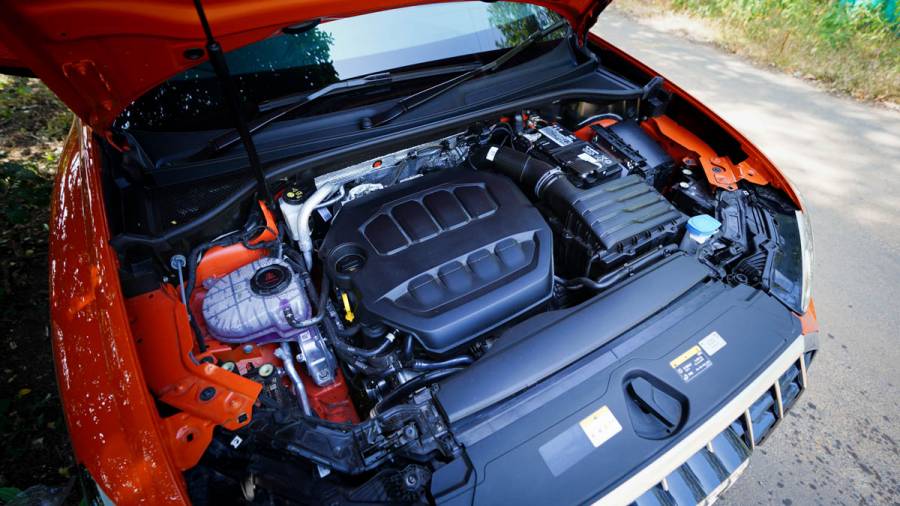 This motor, as we've experienced in its other applications, is competent and fairly engaging. Audi has done a good job of dialling out the inherent gruffness of this engine. No real vibrations come through and below say 2,500 rpm, the Q3 goes about its business quietly. Once past this though, things do get a touch noisier than we would like in a luxury SUV.

But you usually stay below this threshold on a regular commute where the Q3 does well to just flow along with traffic steadily. We wouldn't recommend the eco mode too often with the way it dulls down responses, but stick to comfort and the motor's wide and flat powerband makes light work of stop-go traffic. There's none of the low-speed hesitation from the DCT either although we would have liked it to react quicker to the downshifts you need for a quick overtake. The steering too is light and the fairly small size of this SUV also helps in these situations. 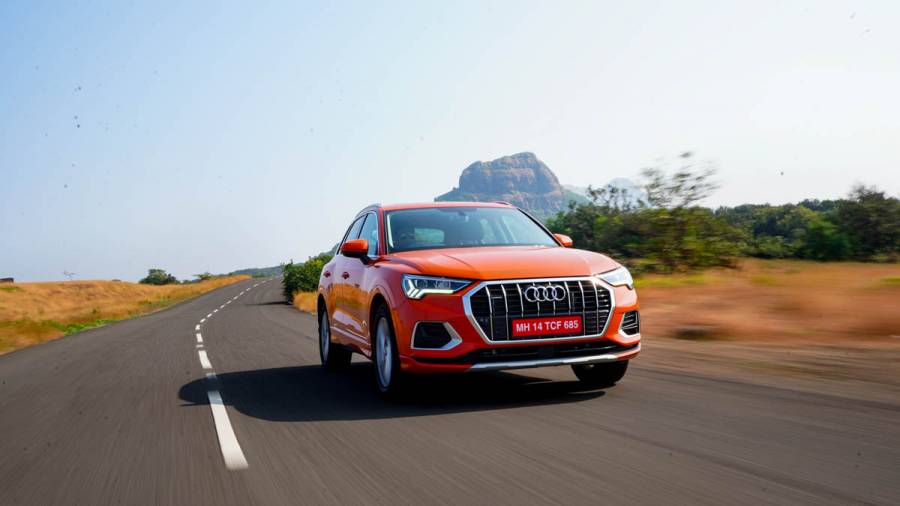 Although, we would have liked a smoother low-speed ride. The Q3 can't fully keep out imperfections like potholes and manhole covers. Yes, they do thud through into the cabin, about as much as any of the Q3's European rivals, and also start to fade away at medium speeds but we found the noisy way the suspension handled these bumps to be a greater irritant.

The Q3 fully comes into its own on the open road. The ride settles further and the Q3 is a plush and composed highway machine. The engine too fully hits its stride, and the wide and easily accessible powerband lets you make near diesel-like progress so holding speeds is quite easy. If you aren't overly concerned with efficiency, the Sport drive and gearbox modes fully liven up the Audi. Here the engine is always in the powerband so there's a much greater sense of urgency and some brisk overtaking pace as our in-gear times suggest. 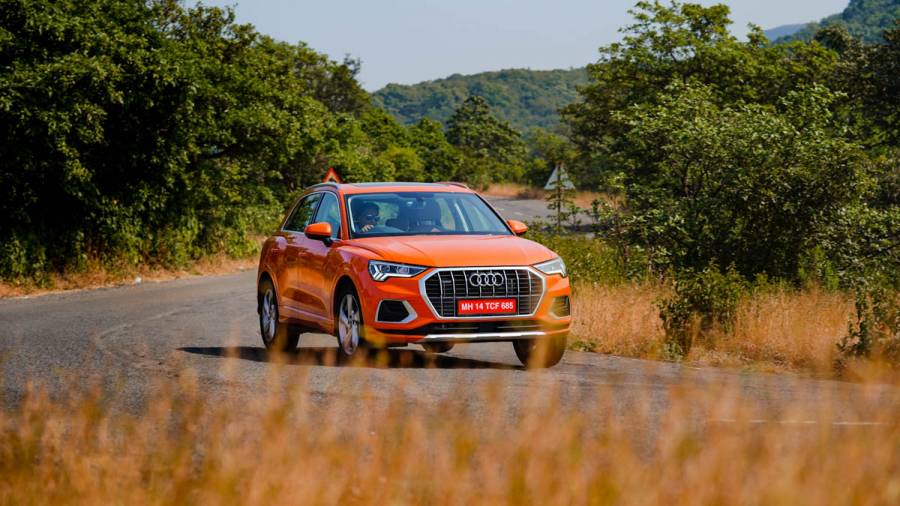 Around a set of corners, yes there is some roll as you would expect, but the quattro system lends the Q3 quite a bit of sure-footedness. Again you can move along at a fair pace with confidence. The Q3 may not be the best choice for the driver in this segment but there is quite some satisfaction to be gained from the solidity and control that comes through at all times, not unlike the larger Q5. The steering continues to be direct but we would have liked a touch more heft and feedback in the Sport mode. The brakes too work effectively and don't through up any surprises.

We think Audi could have done better in this regard. You get six airbags and the usual crop of passive safety features but lesser Skoda-VW offerings as well as rivals do better on this count. We expected to see up to 8 airbags and some level of ADAS functions. There is also only a single rear camera which is limited by a grainy feed. Of course, you have the assurance of a 5-star NCAP rating. 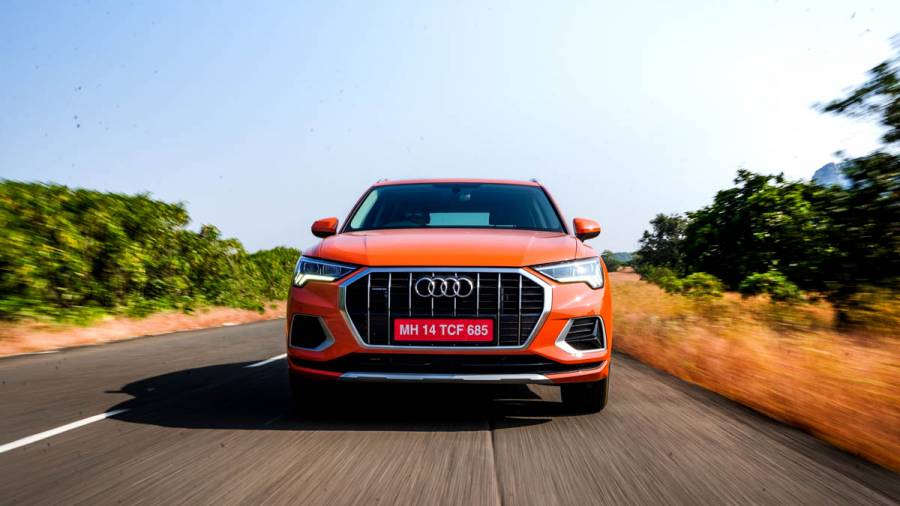 Prices for the new Audi Q3 start from Rs 44.89 lakh for the Premium Plus, but it's this Technology trim that you want which happens to be at the higher reaches of the segment at over Rs 50 lakh. The Q3 could have been a couple of lakhs less expensive considering you miss out on a diesel engine and safety equipment, even with the added AWD drivetrain. But for that extra money, you also get an SUV that is spacious, well-made, quite nice to drive and one that feels like a luxury car should from behind the wheel. 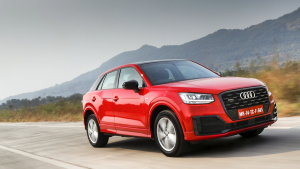